Is Zelda an RPG? Debatable. A Knight’s Quest falls into the same realm, but if you enjoyed or dreaded the Water Temple from The Legend of Zelda: Ocarina of Time, this quest may be for you. A Knight’s Quest is the latest from Sky 9 Games, with the assistance from d3t and published by Curve Digital.

A Knight’s Quest stars Rusty, the daring, clumsy adventurer who has accidentally started a chain of events that might end with the destruction of the world. Oh yeah, he’s also the Mayor’s son who has a thing for large cannons. After the opening events, where Rusty triggers a giant purple crystal to appear in the sky, the game’s narrative begins in the Port City of Regalia. Regalia is a vibrant open world, which Rusty must explore and conquer in order to prevent the threats from destroying his world. On his quest to save the world, Rusty will be helped by Valy, an interesting character who plays the female figure in Rusty’s life- and the one who explains to Rusty that the purple crystal is generating Spirit Energy that will destroy the world. 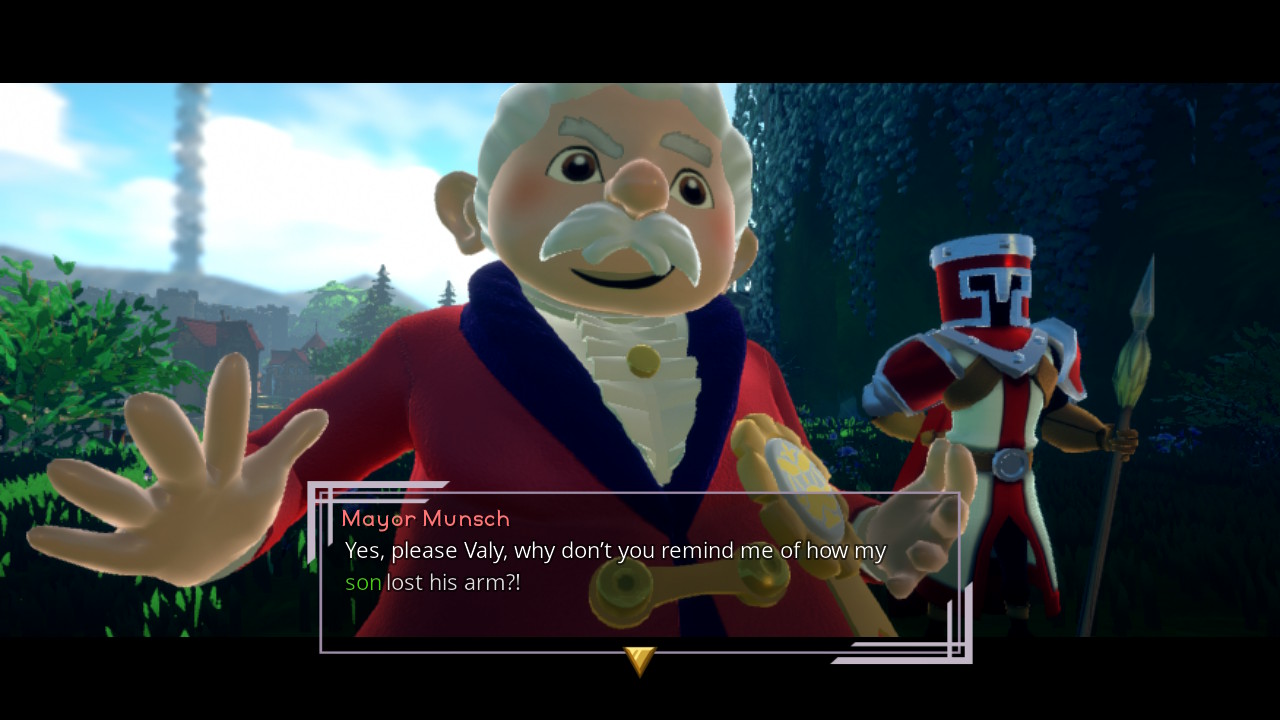 With the premise set, Rusty must save the world, a quest that will take him through forests, deserts, and snow covered mountains. The main villain, the Watcher, waits high above the world, watching Rusty best the 3 spirit knights (Henry the Great, Rocky the Rockman and Ivan the Icebro) and claim their power. Each spirit knight serves as the champion to one of the Watcher’s three guardians, Pakamui, Naraka and Glacia.

As mentioned in my opening, A Knight’s Quest draws heavily from the Legend of Zelda series, although it tries to be unique and add in clever, challenging platforming and traversal mechanics. As you explore the open world, you might relish in the freedom to explore and utilize many interconnected paths, but you are gated into certain areas. For example, there are rails that can later be traversed when Rusty acquires a certain item (hint: they are a set of boots), and this theme continues through the adventure. You will need items and abilities to access more areas and collect the various collectibles sprinkled throughout the world. Some of these are well hidden, though others are in plain sight, but require Rusty to conquer some platforming challenges that will require you to master all of his spirit abilities at once.

The formula for traversing and exploring the world is simple: complete dungeons and trials to unlock an ability or weapon to access a new area to fight a boss. A Knight’s Quest has some great boss fights, and while the combat alone can feel like button mashing, when you are forced to platform, dodge elements, then hit an object at a boss to knock him down and then finally run up and mash on him, it feels fun and rewarding. Rusty sets out with a basic sword and shield, and can lock onto enemies while in combat to make his attacks more focused. In addition, lock on also grants the ability to parry enemies who shoot projectiles, with some enemies only bested by parrying effectively. While there are various types of baddies, the developers have re-used the same types for each area with according aesthetics, so you will see the same enemies across the different biomes. Taking down enemies as you traverse the world is straightforward- you can run up and hit them with your weapon, parry if applicable or you one of your spirit abilities to fire a projectile. 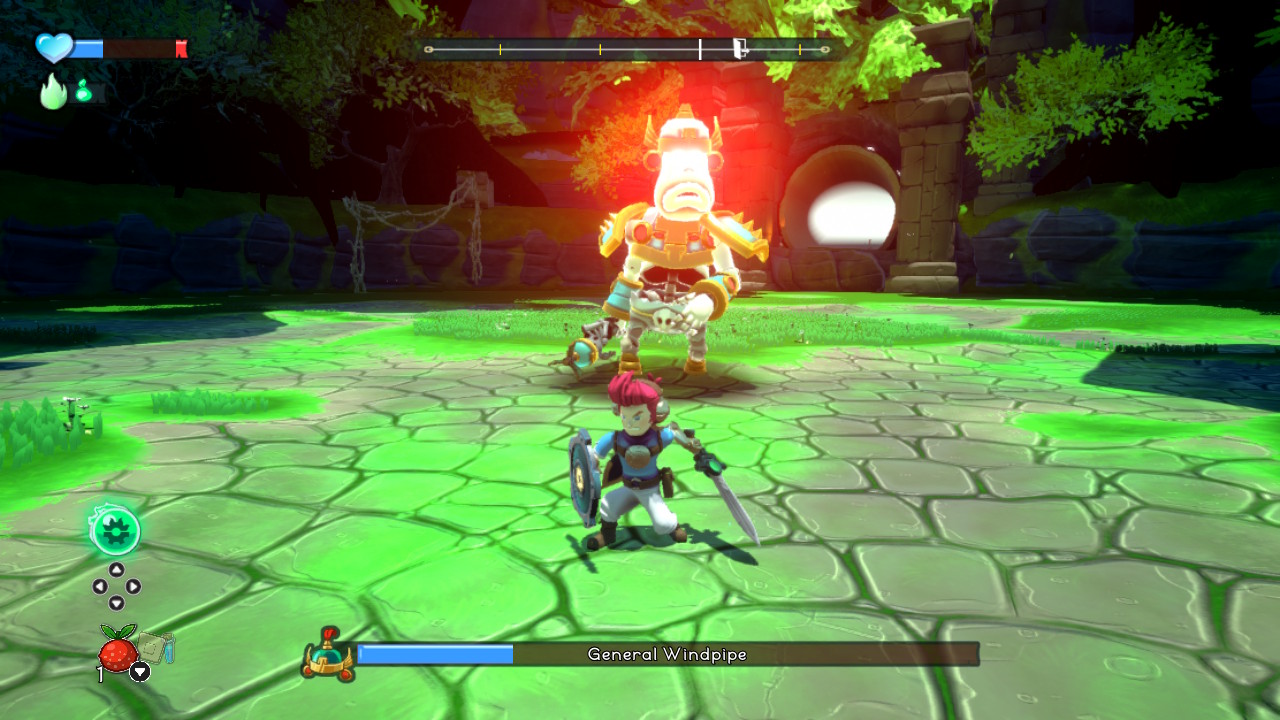 The third pillar of Rusty’s adventure is platforming, and there are plenty of challenging areas to tackle. My personal favorite was featured later on in the final ice dungeon, a dark area with only snowflakes fluttering about. The game doesn’t shy away when it comes to these platforming challenges, as you will meet NPCs who give you quests to reach a flag and race back to them in a certain amount of time. 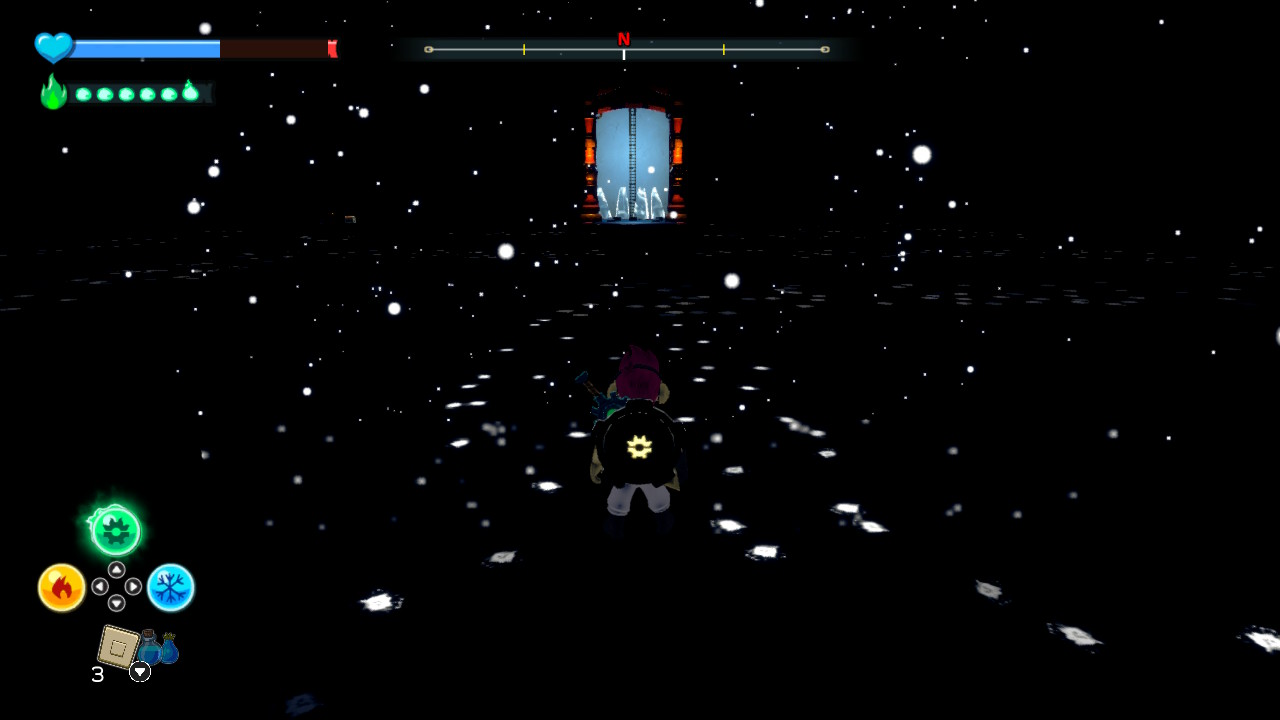 Speaking of NPCs, there are several who can be found throughout Rusty’s campaign that give you quests. Most of these are item hunts that will give you rewards once completed. The blacksmith will offer to upgrade your weapons if you can bring him the necessary items, some of which require you to mine various ores. Another NPC you will meet is Alexander, who can be found in dungeons and acts like Zelda’s fairy springs, but he charges a nominal fee for access to his healing pool. 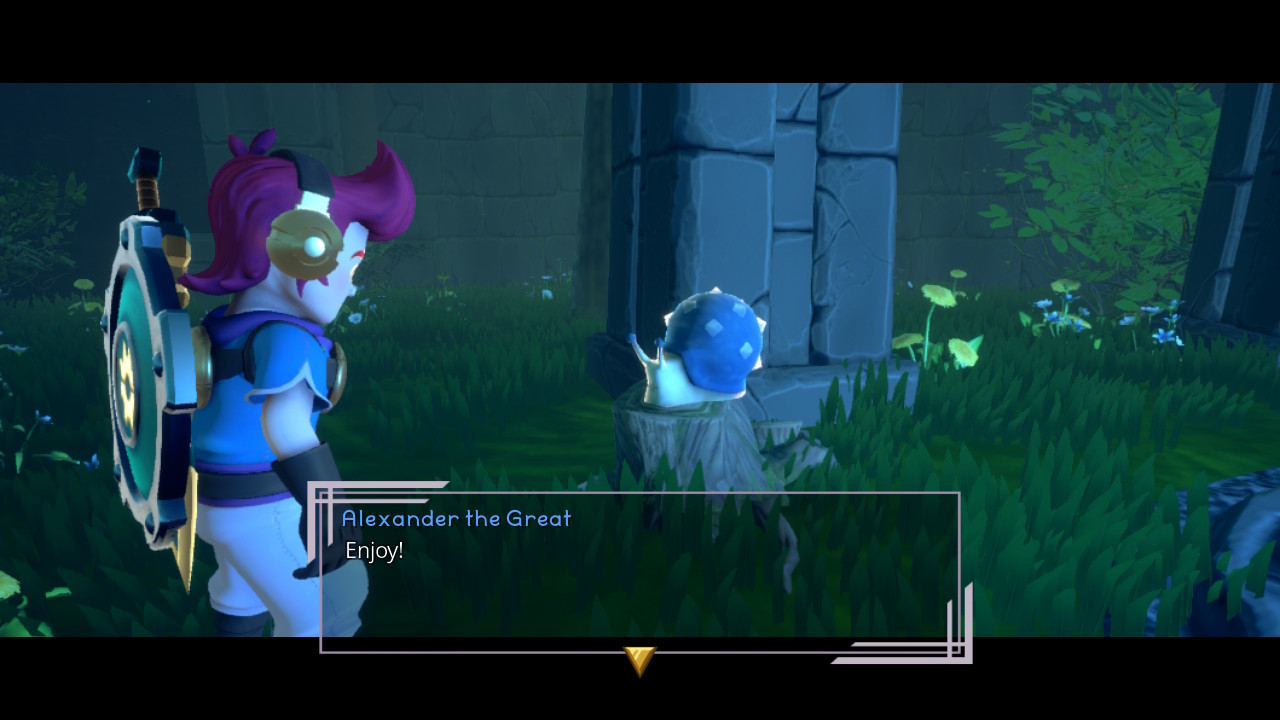 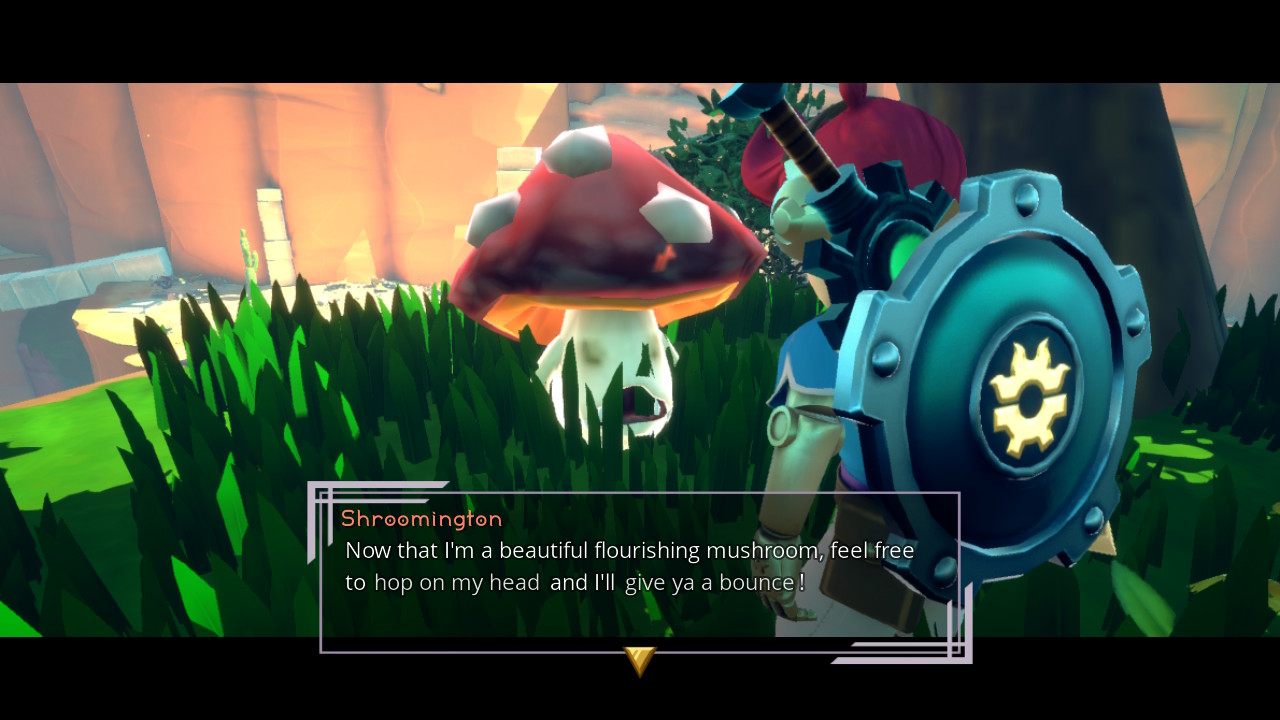 As you explore, you will find slimes, golden keys, and some other collectibles, which can be turned into NPCs as part of quests, which can lead to the reward of more item slots in your bag. You will see pillars on your adventure that look like a fast travel system, and -spoilers- it is, but it doesn’t unlock until very late in the game. 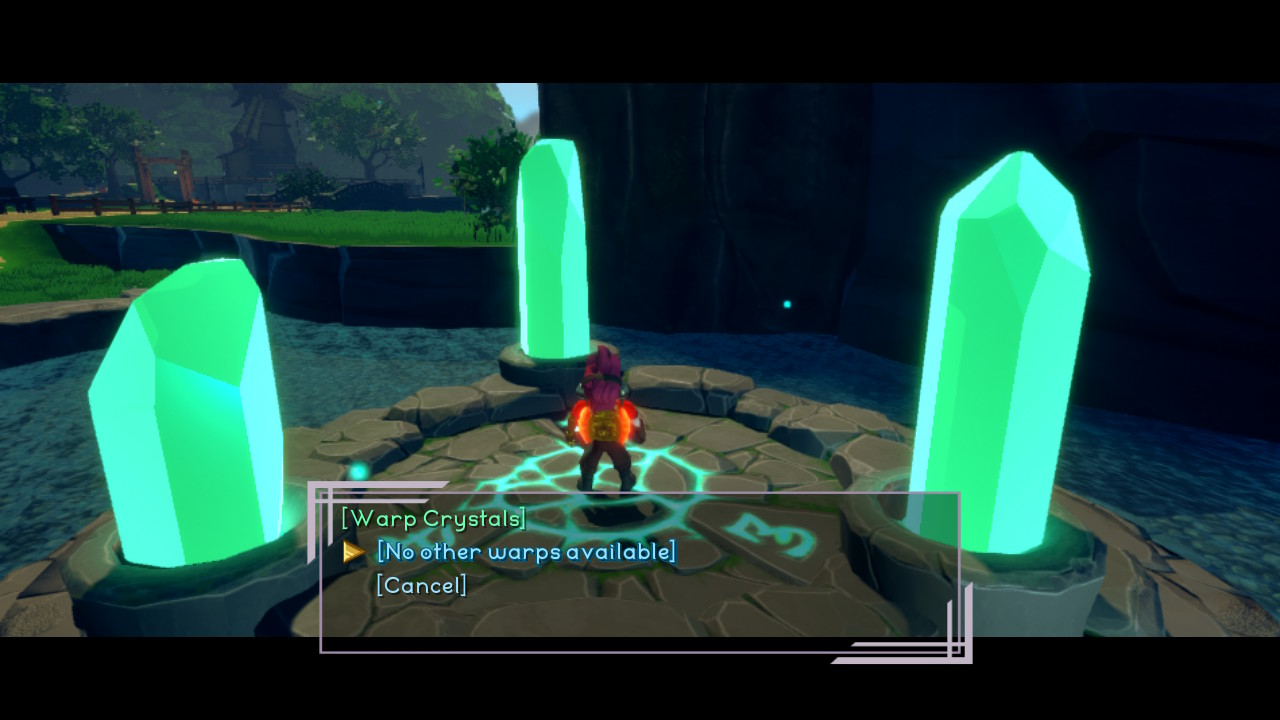 I only experienced one crash with the game, and once I fully rebooted my Switch, I never experienced such an instance again. I will mention the game doesn’t have a manual save option and relies fully on the auto save system, so I only lost some progress when it crashed. I will also mention this save system can be frustrating when working to complete some of the later dungeons, as you might die halfway or two-thirds through and need to start over… which includes re-doing the puzzles. This can be frustrating at times, though a trick I did notice is that the final dungeons have a fast travel point within them, so you can use them to fast travel out of the dungeon to a town, which will trigger the auto save.

The visual presentation of the world is nice, though some of the character models look misshapen and lack emotion. Others are well-imbued with character, however- most of the models express a lot of humor in their dialogue. This is important, as humor & comedy are major themes throughout the narrative. Audio presentation is also a mixed bag: at times it’s very varied (the boss fight music is particularly thrilling), but at others- specifically when Rusty is jumping- the game makes the same sound effect over and over, which can become annoying. 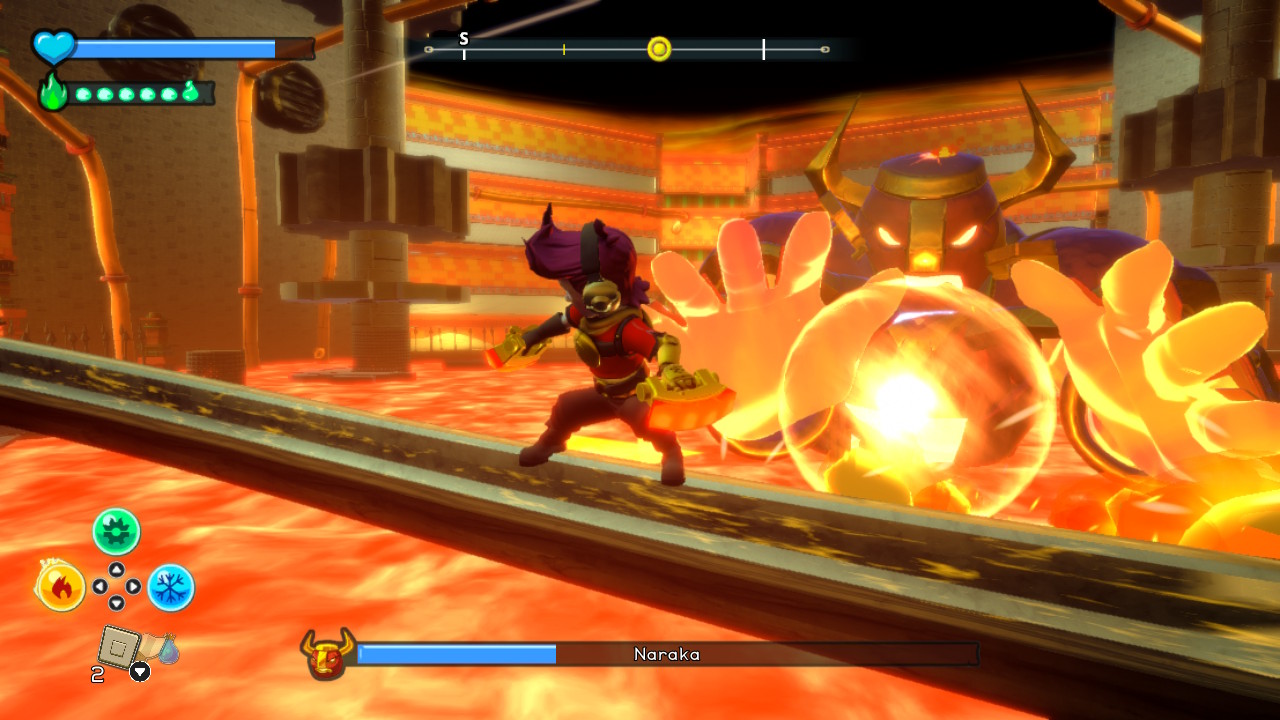 A Knight’s Quest took me by surprise, as I didn’t expect the game to be as deep and dense as it is. I expected a 5-10 hour game, not a 20 plus hour adventure. The game’s writing has great charm and humor, and each time you revisit the 3 main biomes, they transform and expand with even more to do and conquer. Completing this game was no small task, as some of the puzzles become very complex, especially in the final version of the fire temple. The puzzles found within will make you think for a while, as the game does not hold your hand by giving you hints when it comes to solving them. One of the title’s biggest missteps is the upgrade pacing, with the fast travel ability not being introduced until the last third of the game. I feel a manual save system or more checkpoints for the auto-save system would make the experience far more enjoyable. A Knight’s Quest doesn’t hide its inspiration from the Legend of Zelda series, and having just completed the top-down Link’s Awakening, it was nice to play a 3D adventure. Despite some flaws and odd pacing issues, A Knight’s Quest is certainly one worth taking.

This definitely looks like something to pick up on the eShop. I’ll try to wait for a sale, but I’ve a feeling I won’t be able to.