For a niche subgenre within an already niche genre, the latest tactical RPG by Team Asano, Triangle Strategy, has done quite well for itself. Two weeks ago, reports suggested that the latest HD-2D project had sold 800,000 copies worldwide in its first two weeks, and it’s logical to assume that they’ve since broken or come near the million mark that its predecessor, Octopath Traveler, achieved in just three weeks.

By that measure, Triangle Strategy – save for its awful name – has been a success, and fans are sure to wonder what’s to come in the same vein from Square Enix. If the previously covered Nvidia database leaks were in fact legitimate, then the path may next lead to a Final Fantasy Tactics Remaster. And with the solid sales trajectory of Triangle Strategy, and Square Enix’s commitment to milki-I mean, revitalizing existing titles, I wouldn’t be surprised at all if it actually comes to fruition.

So let’s say Final Fantasy Tactics Remaster/Remake does become a thing – how should it be packaged? I imagine most people would sit in one of two camps: those in favor of an extensive overhaul, and purists who’d prefer the original formula left as intact as possible, if not a direct port. I am of the mindset that careful change is necessary, so long as the spirit of the original remains at the core of the experience. Truthfully, a Final Fantasy Tactics Remaster could learn a few things from Triangle Strategy. But the opposite is also true, so let’s take a look at a couple of the things that both games learn from each other! Have ideas of your own? Be sure to let me know your thoughts in the comments below!

One of the most impressive things I’ve found in Triangle Strategy is its general class balance – even niche characters still have some incredible utility and viability in any given encounter. On the other hand, Final Fantasy Tactics is notoriously broken, particularly when it comes to certain special jobs. Any game with a job system and deep customization is bound to be broken with enough time and dedication (that’s part of the fun) so let’s ignore that fact for now and instead focus on the extreme outliers.

What I’m primarily referring to are certain unique jobs that are only accessible to a select few, many of which can clear entire maps of enemies with ease, and with little to no investment. Thunder God Cid and Balthier are among the most ridiculously OP units in the game, but virtually any “mage knight” class can become powerful with little effort. These jobs are awesome and iconic, but could certainly stand to be brought down a few pegs and still be impressive.

My proposal would be to add either a mana cost OR charge time (but not both) to most of these types of attacks, so that they remain powerful but require deeper strategy to be consistently effective. Other than that, a pass over all jobs to adjust some dead or perhaps even broken abilities would also be a welcome change.

Optional speed toggles have become the norm in many retro-inspired modern JRPGs, and for good reason. Grinding sessions that used to take hours can now be accomplished in half the time – an option that purists can simply ignore altogether. But it’s not even just about the grind itself, but rather the ability to speed up lengthy animations that the player may have seen hundreds of times already, or just speeding through the opposition’s turns in order to quickly get back into the fray.

I feel that Triangle Strategy is better for its speedup function, and a Final Fantasy Tactics Remaster would be no different. But another quality-of-life improvement that the theoretical latter could adopt from the former is improved JP accrual. In the original, oftentimes the best course of action was to make a big circle with your units and hit each other repeatedly for EXP/JP gains – not so different from Final Fantasy II. I shouldn’t have to explain why this is not a good thing. While I think there are better designed systems than those found in Triangle Strategy (Fell Seal comes to mind), the game nonetheless marks a significant improvement over what was used in Final Fantasy Tactics.

Mages, healers, and slower moving units in general have no problems keeping up with faster, more nimble units in Triangle Strategy; not really the case in Final Fantasy Tactics. The inclusion of follow-up attacks also drastically increases the opportunities to bring up lagging units. I don’t think follow-up attacks have a place in a Final Fantasy Tactics Remaster, as it would fundamentally change how the game plays, but there’s no denying that some refinements, or a complete overhaul to the original EXP/JP system, is certainly due.

The following points are not a plea for changes to be made to Triangle Strategy now, but rather what Team Asano could consider implementing into whatever title may serve as a followup to it. That said, these changes, in my opinion, certainly would have made Triangle Strategy even better: 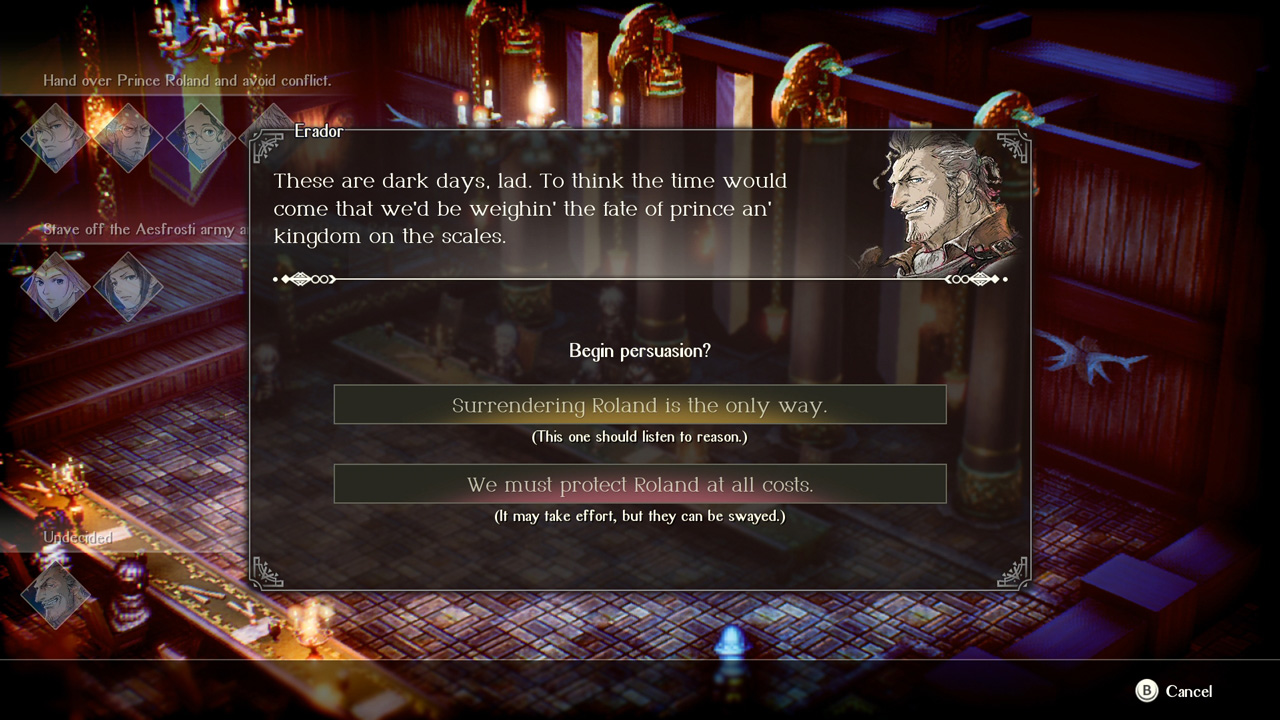 Naoki Ikushima’s portrait work on Triangle Strategy is nothing short of exceptional, so it begs the question: why do they get so little in-game screen time? All I can guess is that the team tried to “de-clutter” the screen, especially since voice acting helps telegraph characters in conversations. But the truth is that many, including myself, opted to turn voice acting off, and the lack of portraits is especially troublesome for speed readers. In my opinion, visual cues (in this case, portraits) are far easier to quickly digest than relying on the direction of chat bubbles alone. Moreover, implementing portraits with dialogue boxes in the style of Final Fantasy Tactics, requires very little additional real estate since they exist within the text box itself. So, why not?

There’s a trend amongst newer tactical RPGs that I’m just not a fan of – that being static, repeatable battles in lieu of random ones. Triangle Strategy implements the former with its “mental mock battles,” as do many other titles in this subgenre. While I understand that some may find the efficiency of grinding out a consistent, never-changing map to be appealing, I find it extremely dull with no variation, especially when there are only one or two viable mock battles (for EXP) per level bracket. Final Fantasy Tactics allowed the player to travel the world map and run into random encounters on previously unlocked maps, which helped make those grinding sessions feel much more fresh and dynamic. 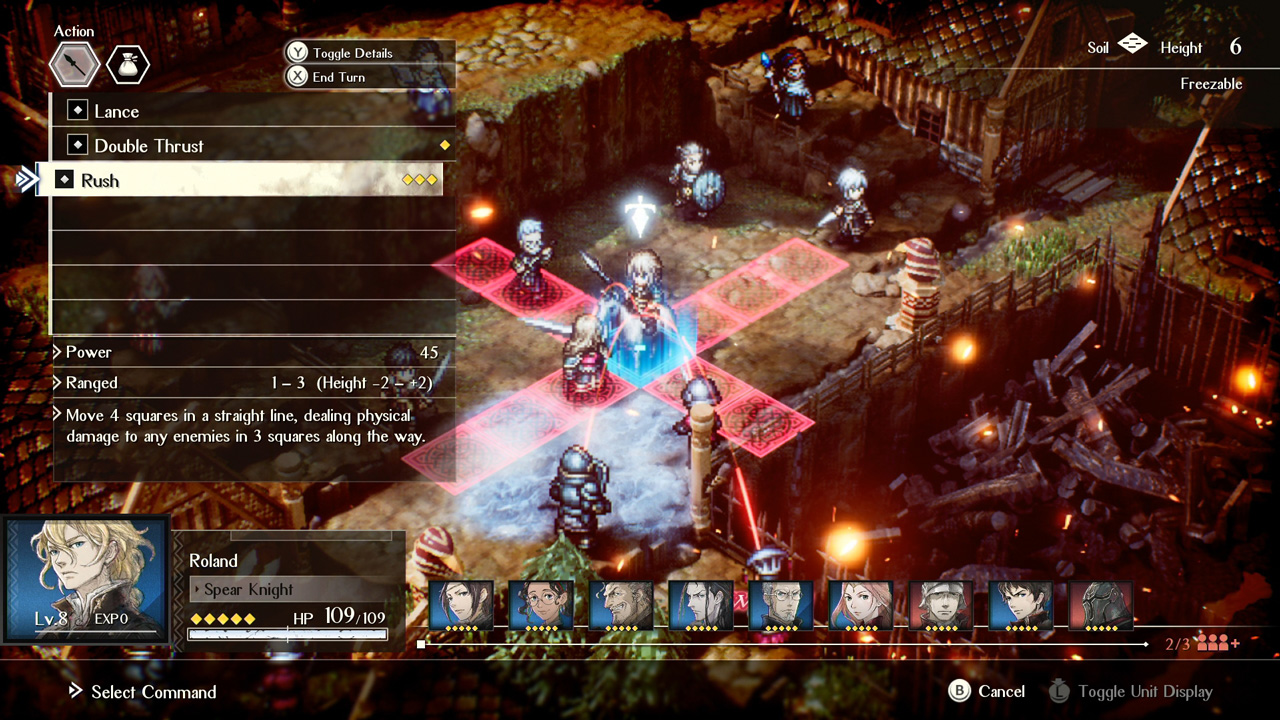 That said, I don’t think random battles should replace static, repeatable encounters altogether. But why not have both? Why not make an additional mock battle that randomly selects a map, and populates it with random enemies that are scaled to your level? Such an implementation would allow the best of both worlds to shine equally.

I could provide details of more things that both games could learn from each other – a more detailed “War Chronicle” a la Final Fantasy Tactic’s “Brave Story”, for example – but I want to turn the conversation towards you. Do you think our dreams of a Final Fantasy Tactics Remaster will see the light of day? Does the success of Triangle Strategy improve the odds of it actually being a thing? Finally, do you agree or disagree with my proposed changes/additions to either game, and what would you suggest differently? Let me know!