Things I Wish Were In More RPGs

As I’ve gotten older and my RPG resume has grown, I’ve come to the realization that, at their core, many RPGs are the same. But that isn’t to say that sameyness is a bad thing; in fact, many people despise change in some shape or form. When you get down to the base level, comparing almost any turn-based RPG to another turn-based RPG will likely result in definite similarities.

Of course, this is often circumvented by way of the plot itself or its delivery methods, minor tweaks to combat, or other additional mechanics. Innovation is never a bad thing, especially when it comes to RPGs. As I’ve come to experience new and/or interesting takes on RPG systems over the years, I’ve also found myself subconsciously comparing games to others when features I’ve grown fond of are absent in whatever the current title might be. Below is a list of things that I’d like to see in more RPGs, and I encourage you to share your experiences as well.

It’s not uncommon to see a codex of sorts in most modern games, but even then they can leave a little to be desired. For me, a useful compendium is one that not only offers bits of lore, but is also the home to any in-game tutorials that you come across. For example, Xenoblade Chronicles 2 does what I consider to be one of the worst jobs of explaining a combat system. You are receiving tutorials 10, 20, even 30 hours into the game, and cannot revisit them outside of pathetic, one-lined purchasable items that induce rage more than actually being helpful.

What ended up fixing the situation for me was a Reddit post where someone took a single screenshot and provided commentary on each of the combat UI pieces. After that, everything made complete sense. I mean honestly, how hard would it have been for the developers to provide a similar reference in-game? The sad thing is that XC2’s combat really isn’t that in-depth once you get a complete grasp of it, so the fact that there is no easily referenced in-game solution for it is just a crime in my book. 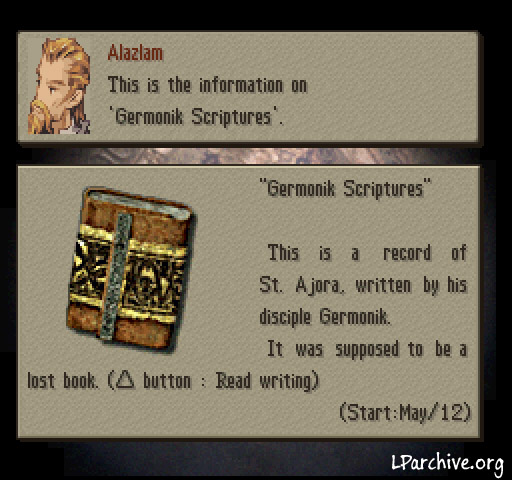 There are other instances where games spout names, locations, and other lore tidbits at blazing fast speeds, or in a manner as if you are expected to know what they are talking about regardless of whether ample context is given or not. I find it difficult sometimes to remain invested in a story if things start to get to the point of where I am unable to keep track of everything (and have no way of returning to that information). Why not offer a convenient way to reference key points of a game’s plot in-game?

Just look at titles like Dragon Age or Final Fantasy Tactics for references on how to do these things right, and they are old games to boot. Whatever you do, for the love of God, don’t do what Destiny did and offer something outside of game while severely lacking anything useful in-game.

Playing MMOs for a solid decade like World of Warcraft have really made me appreciate music in a different way than I have been accustomed to in the past. In classic RPGs, we are used to having clearly defined differences in battle music, overworld music, dungeon music etc. Flashforward to the era of more open-world games, and ambience or soft spoken pieces may play in the background as you explore a vast world. Usually, there isn’t an abrupt change to the music when you get into a sticky situation with a foe. I’ve grown to really appreciate this in non-traditional RPGs that have me wandering a large area for hours on end.

Let’s take Xenoblade Chronicles 2 as an example again (as a quick aside, I actually really enjoyed XC2 outside of the couple of things mentioned in this article). I did not like the battle music whatsoever, but I DID really like the vast majority of zone pieces. Sadly, you only get to hear bits and pieces of these wonderful tracks because they are interrupted each time you get into combat (ie. all the time).

I wouldn’t have as much of an issue with that method if you cut to a completely different screen for combat, much like you would in classic JRPG fashion. Since that is not the case in my XC2 example, I would have loved for the option to mute the battle music specifically in favor of soaking in those area-specific tracks just a bit more. Hey, more options for the consumer isn’t necessarily a bad thing, right?

Okay, before the already angry mob of people threaten me on the heading of this section alone, let me explain. In the wide and varied scope of games that the RPG genre encompasses today, there is only a small sub sect of that where a speed-up or auto battle mechanic would even logically make sense, which of course would be virtually anything akin to the traditional Final Fantasy battle system. There are outliers, such as Romancing Saga 2, where such a system would, on average, do more harm than good. But there are tons of JRPGs released every week on numerous platforms that hearken back to those Final Fantasy combative roots, and most of them would benefit from having such a system.

I can appreciate old-school grinding sessions as much as anyone, and am more than willing to walk that path if necessary. But if we’re being completely honest, advances in those systems (as well as less time to play games in general) have led me to really enjoying the quality of life additions that have been augmented into this decades-old battle system over the years. The option for an auto battle, or combat animation skipping is something I’d like to see more often in your average, Golden Era Final Fantasy-esque RPGs released today. That said, I do believe that there is a right and wrong way to go about such a system.

Those dismissive to these types of mechanics probably think it makes the game less engaging or less difficult, and this is my question to you: Does the ability to manually spam the same attack ad nauseam really add any sort of depth or enjoyment to the game over setting up an option to repeat the process for you (or in the case of a speed-up mechanic, shorten the time needed for an encounter)? In case it wasn’t already crystal clear, I’m specifically talking about your basic, random encounters here. Regardless, properly designed random encounters will discourage you from abusing the system to an extent anyways.

Asdivine Hearts from KEMCO is a prime example of a situation where auto battles and animation skipping are an option, but will not be ideal, or even possible, in many situations. In this game, enemies will occasionally enrage from your attacks, which makes them counter every subsequent attack of the same flavor thereafter. This system keeps you from auto battling to oblivion because you are forced to change up your tactics during more difficult random encounters (unless you just enjoy dying).

I think that the most important takeaway from this whole section is this: nobody is going to use an auto battle system when an encounter is actually an appropriate challenge. The only instance where the system will find use is in encounters you think you can survive without much interaction. To me, I see no difference from an enjoyment standpoint in holding down the A button to repeat an attack, or being able to initiate the sequence automatically with a single button press. Perhaps that’s just me, but again, we’re talking about an optional feature here. If it’s there for me, you don’t necessarily have to use it yourself.

Save Anywhere (or Mostly Anywhere)

Saving anywhere is less of an issue on the 3DS or Switch, since you can suspend the system in a pinch without any worry of losing your progress. But a save anywhere feature is why I have a hard time playing lengthy RPGs on anything but the Switch these days. There are plenty of games out there lacking a save anywhere or a quick save function, and I don’t understand why.

Maybe it is just a “getting older” or “being an adult” problem, but sometimes it is quite difficult to dedicate a solid hour or more to those games that require it in order to get from one save point to the next one. Again, the era of modern handhelds have really spoiled me when it comes to RPGs, and is why I love my Switch so much. The fact that I can get the TV/Monitor experience when possible, but also take it on the go at the drop of a hat is simply the best – all without the worry of losing my progress.

What do you think about my picks on this list? What are some things not mentioned above that you wish were in more RPGs?