The Good, The Bad, and the Godly (Immortals Impressions) 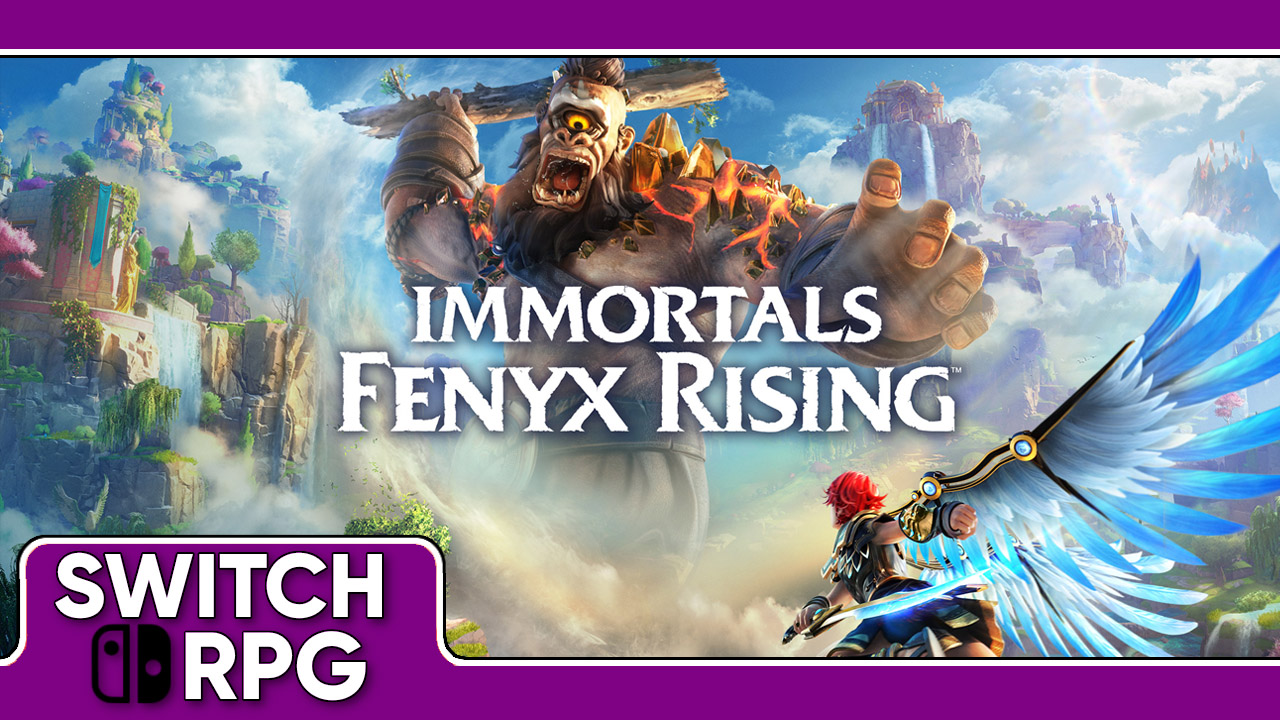 If one has played Breath of the Wild, then once they’ve finally navigated the online save signups, DLC checking loading screens, and egregiously long opening cutscene of Immortals: Fenyx Rising, they might find themselves struck with a sense of familiarity. While Breath of the Wild most certainly takes inspiration from many of the open-world titles that have existed for more than a decade across platforms, Immortals seems to be a response to Zelda’s own open-air formula. There are the obvious comparisons to be made: where Breath of the Wild has Shrines, Immortals has the Vaults of Tataros. Where there is a paraglider in one, the other has the winds of Daidalos. One features a Calamity-seeped castle at the center of its world, the other, a volcano with the face of a titan – er, sorry, Typhon.

The obvious is not what we’re here to discuss, however, because any website worth its salt could list the ways Immortals does things like Breath of the Wild. While I’ve certainly been enraptured by the game’s addictive exploratory design, there are many ways that Ubisoft’s title succeeds at – and falls short of – surpassing Breath of the Wild due to key game design choices. While my playthrough is only ten hours deep, I have plenty of thoughts to share on my experience so far, as the early game of both of these titles is a crucial indicator for long-term enjoyment. In this article, we’ll discuss the good, bad, and ugly elements of this new title from an early perspective, and see if our thoughts change as time goes on.

If there’s one critique many felt was apt to toss at Breath of the Wild, it was that its world was a bit too big for the amount of content featured within. Hyrule was vast, but empty, an understandable side effect from having your kingdom destroyed in a cataclysmic war a hundred years prior. While the isle of Olympos isn’t exactly faring all that much better, Immortals benefits from its setting in a way that Zelda couldn’t.

As a mythical island setting, Olympos has the variety in terrain required for plenty of personality in open-world gameplay, but in terms of size, Immortals plays more tamely with space in order to enhance the density of content. This means no matter which direction you face, you’re likely to spy three or four visible features that Fenyx can interact with – not just Vaults of Tataros, but the many other elements that Fenyx incorporates into its world design. Yes, many of these are sprints to a certain point, or arrow-firing courses as simple as Korok challenges, but they are so much better telegraphed that it allows them – for better or for worse – to be integrated into the core progression loop. 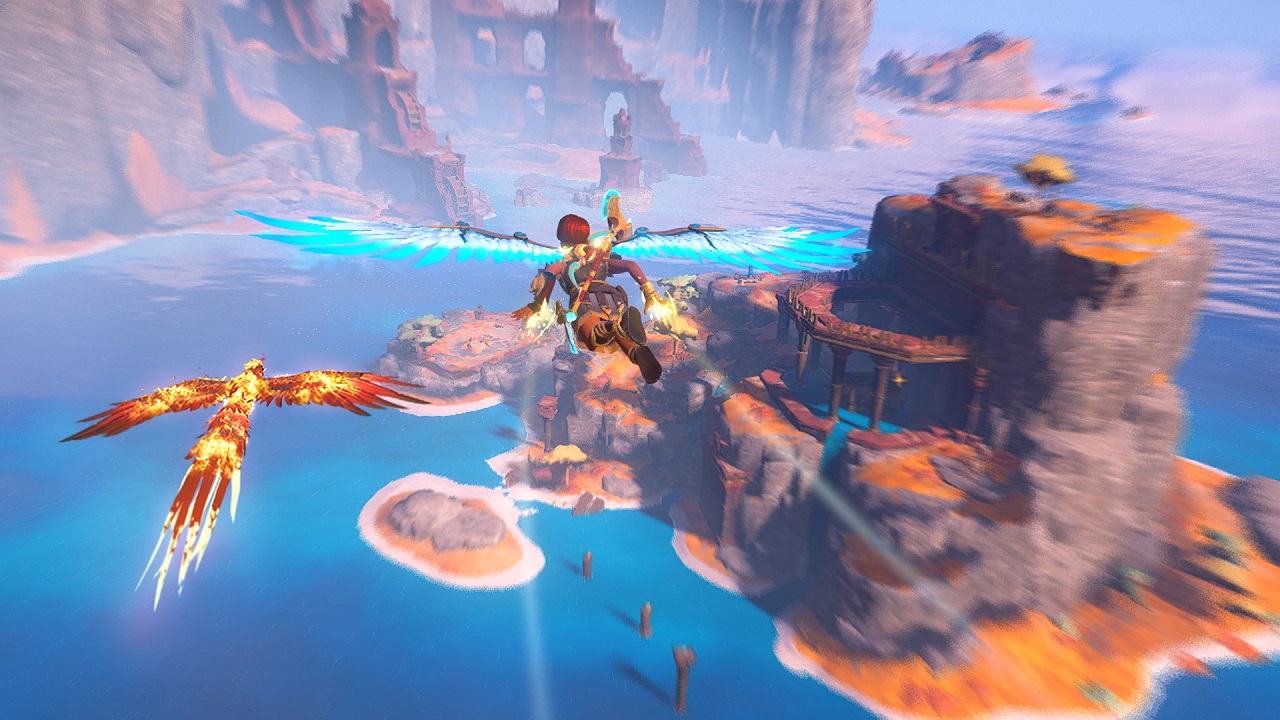 Many may have bemoaned the nature of Zelda’s weapon durability system, which, for certain players, disincentivized combat because of its high risks and relatively cheap rewards. Fenyx sidesteps this issue in a number of ways, first by offering players two primary weapons to use to their heart’s delight, but also by making chests extremely valuable due to their progressive enhancements. You’ll almost always get rewards from them in a colorful variety of gems for upgrades, but Immortals tracks the number of chests you’ve opened, and upon reaching certain thresholds, grants you new pieces of equipment. It’s a brilliant system that makes enemy-encounter-based chests a much more valuable prospect.

That’s not to say that combat doesn’t have its own rewards. A key difference that Immortals possesses is experience gathered from fallen enemies in the form of one of its many color-coded collectibles, which can be used to enhance equipment when collected in substantial amounts. Though basic wildlife will grant modest rewards, the fauna of Olympos can offer substantial challenge in its own right thanks to their surprisingly detailed movesets.

Immortals may offer many more granular choices in regards to combat and character progression, but this comes at a price. The amount of collectable goodies in this game feels absolutely egregious at times, especially considering the amounts needed to upgrade specific parts of Fenyx’s loadout. The various colors of collectables scale into the hundreds quickly, being used for very specific kinds of upgrades or needing to be combined with another type of currency in order to invest. This is all specifically for equipment, which is the most reliable way to increase survivability in the game’s dangerous overworld, but there are other collectables for increasing health and stamina, and yes, I’m talking about exclusively increasing those stats.

Since chests grant a smattering of each of these equipment resources, you’ll need to find many throughout the world and in the Vaults of Tataros. It’s all very traditionally Ubisoft, in a way, and it negatively impacts player choice in build composition due to the variance in where these resources are placed. Simply put, if you want to have options for your character build, you need to explore everywhere. The only exception to this exhaustive collection are Charon’s coins, which are the sole reward for completing Myth Challenges. These coins can be applied to specific abilities, as well as unlocking new God powers, though this opens up another can of worms. 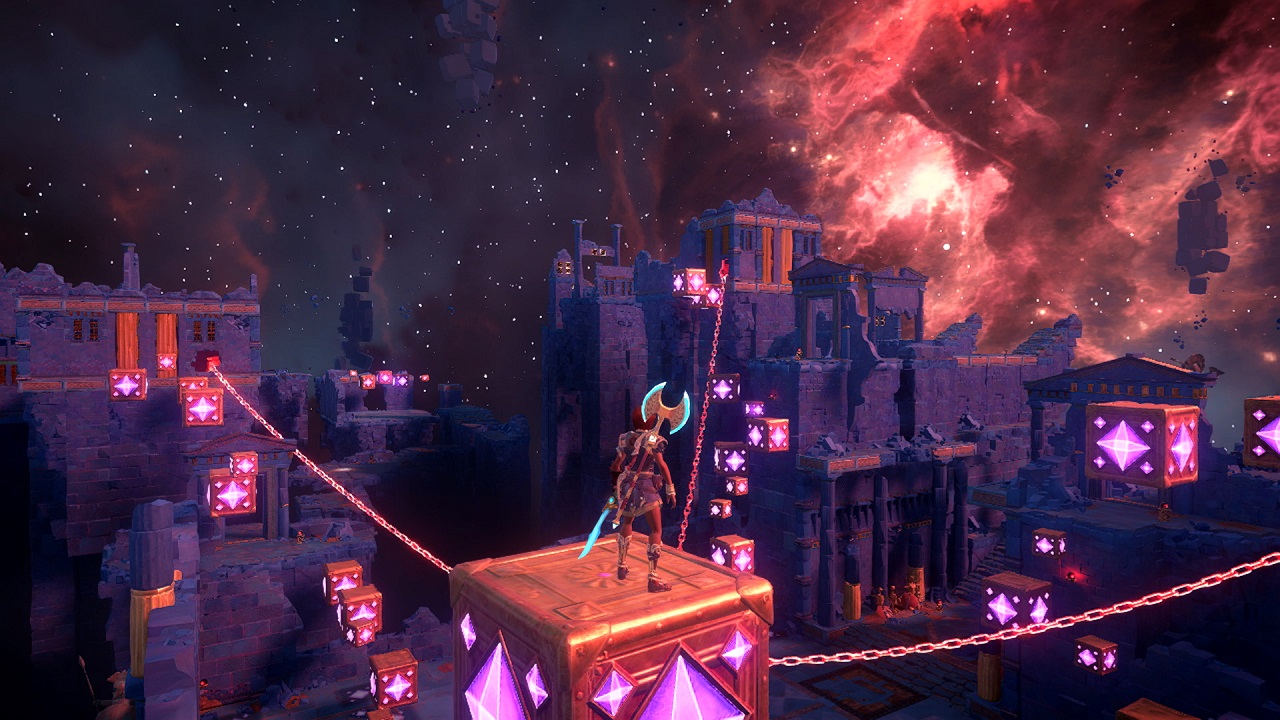 Even when Immortals is supposedly done with its tutorial, it still has plenty of new concepts to introduce to the player via progression and specific quests. The God powers obtained in the tutorial, for example, are not only upgradable, but are not even the only God powers the game has to offer. Helping each of the four main Gods in each of Olympos’ main regions grants blessings that can be further enhanced. Oh, and you get a horse and a bird that open up new combat and traversal options. But the most frustrating part of this progression cycle is that some of these upgrades and abilities are required for specific Vaults of Tataros, which goes against the idea of freedom of experience and makes new discoveries much more of a gamble.

I understand that writing and story in games is a point of contention among many video game enthusiasts, and in many ways, the open-ended nature of Breath of the Wild’s narrative – and the access to that narrative – was a bold choice in a series focused on linear storytelling. On the other hand, Immortals is so bloated with writing that it feels inescapable, and also insufferable.

The lines from the game’s dual narrators are passable more often than not, and the way they offer commentary on specific myths when encountering a Myth Challenge is neat. But the amount that these two, as well as the rest of the cast, feel that they have to say is so highly unnecessary for a game that should be about freedom of exploration and choice. Sure, you could just mash the B button in order to get through these sequences, but doing so only further highlights the amount of text dedicated to cutscenes, as this allows the player to only skip line by line.

Listen, I enjoy all the references to Greek mythology as much as the next person, but when the game has Hermes introduce six different crafting tables to me that are all within twenty feet of one another, I just need the game to shut up and let me go on my way. What’s worse is that the game is also willing to simply tell you what each of these stations does after each cutscene, meaning that the commentary is superfluous in the worst ways. But it also speaks to a lack of confidence in the player that so many of these systems require multiple forms of explanation and justification – almost as if the developers desperately needed to validate their inclusion. 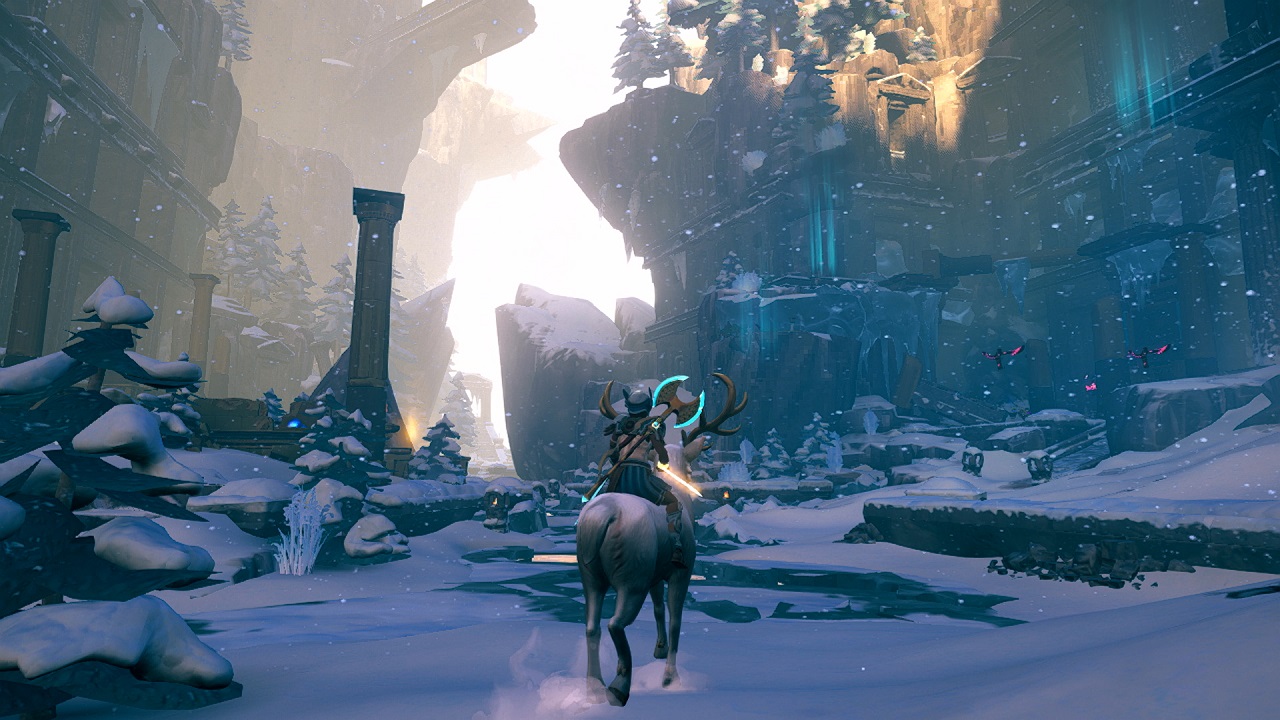 I also don’t quite know who I should be siding with, seeing as Hermes and Zeus, two major faces on the side of good, are irredeemably obnoxious, and Fenyx herself paints Aphrodite as a massive narcissist capable of starting wars over her beauty. These are the characters I’m supposed to be… saving? That I should care about? That Typhon has cast down in order to create a new world? Sure, that’s a world infested with demonic creatures, but even so.

…And for goodness’ sake, can you please stop with the slight misspellings of mythological figures?

Though the narrative implications of Immortals still leave me puzzled, I will say that it is suitably scratching my open-world exploration itch in a way that not many other games have done. Even with its flaws, I can easily see myself sticking with the game thanks to the overall impressive design of many of its Myth Challenges and Vaults of Tataros – the ones I can actually access, of course. Sure, the experience might pad itself out a bit with its currency grind, and I may or may not feel the urge to explore every nook and cranny, but I will get around to my summative thoughts on the experience in the (hopefully) near future.