After the release of Crystal Chronicles: Ring of Fates, a collective cry rose from the masses. One of extreme anguish, bewilderment, and anticipation. There had been dreams unfulfilled in Ring of Fates, a game with a trippy story and lots of character, but design choices that felt awkward and emphasis on aspects that weren’t in the spirit of the original. Most importantly, however, this throng of wailing had a specific tone to it, a melody that rang true no matter whose voiced concerns reached one’s ears. It sounded a little something like this:

“When are we going to be able to play online…?”

Echoes of Time is a very different sort of game from its predecessor, though many of Ring of Fates character models and mechanics are present. Strangely enough, this game can be played on either the Nintendo DS or the Wii, as Square Enix touted the development and usage of the Pollux Engine, which would enable players on either system the ability to link up with one another. This system would never be used again for another Wii title, but hey, it’s the thought that counts. In any case, aside from possessing an entirely new narrative, there have been some alterations to mechanics, as well. Characters all have MP now, which can be used to perform charged attacks and to cast spells. Obviously, the MP damage max amount for Yukes is much higher, but allowing unlimited access to all kinds of magic for all races is a welcome change. Each race can now use two types of weapons – Clavats have swords and axes, which really don’t have much mechanical difference, nor do Yuke’s staffs and tomes, the second being a book on a stick.

Selkies and Lilties get the most substantial benefits, with the elvish race having bows from Ring of Fates as well as their imposing lacrosse sticks from the original title (they’re called paddles here and rackets in the original game, but still). Lilties, on the other hand, retain their hammers from the previous game and also get spears, compensating for their height rather nicely. The protagonist this time is a player-created avatar, leaving the possibilities wide open in a manner similar to the original title. Players could easily progress through the game a number of times using different races, though this doesn’t affect the outcome of the narrative at all. As players reach their highest levels, they may find themselves opening up the ability to utilize combination and charge attacks of other races, as all races can wield one another race’s weaponry, but raise proficiency in their race-exclusive weapons faster. 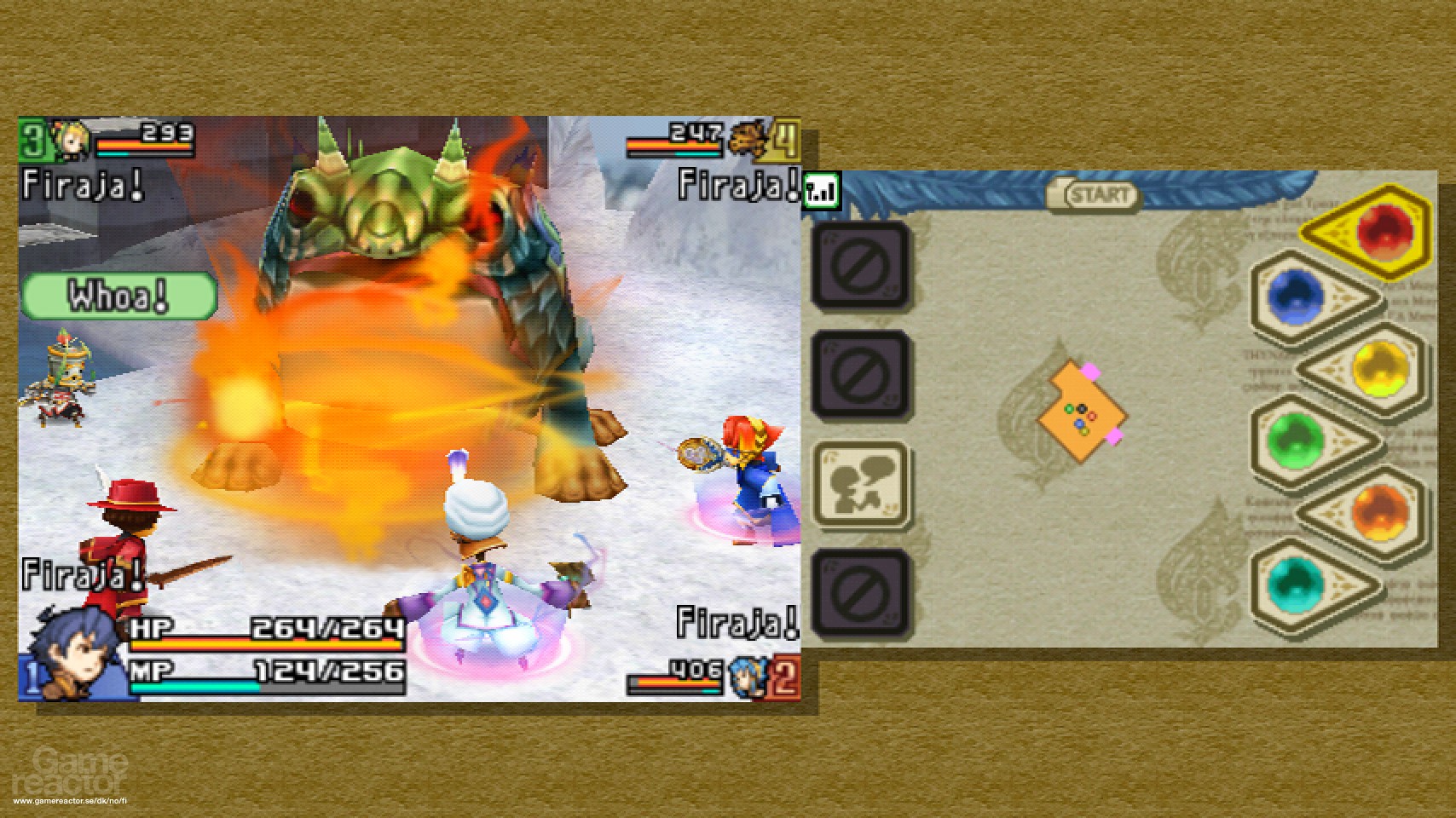 Armor utilizes an extremely impressive new system, where individual pieces of equipment level up as they are used in dungeons. Likewise, all equipment possesses slots that allow certain stat – and ability – modifying buffs to be applied to the player. While these systems may not seem impressive separately, armor can be converted into jewels, with higher levels granting more powerful abilities. Continuously pushing gear to higher levels and creating new jewels from maxed out equipment creates a satisfying gameplay loop that keeps players invested in gathering material drops from enemies while their character slowly progresses, as crafted armor can yield even stronger results.

It’s a pretty sweet deal, but what’s even better is how Echoes of Time takes the foundations established by Ring of Fates and embellishes on them. Sure, you’ll see your forest, fire, ice, and ruins dungeons, but you’ll also encounter new level geometry, and you’ll eventually get to a technology-laden bridge and city, a secret underground lab, and a mysterious graveyard. You’ll travel through a story that’s so damn weird, you can’t help but be engrossed, especially since the main antagonist is a tall guy in a fishing hat.

Echoes of Time is a story about… well, the echoes of time, events happening in the present that cause the past to change. Likewise, it’s a game about growing up and taking on responsibilities, and accepting that the past can’t be changed. The adorable village you start your sixteenth birthday coming of age ceremony in changes drastically over the course of the game, and there’s nothing really that can be done to stop it. Because Echoes of Time takes steps away from the rustic feel of previous entries, it takes on a unique personality of its own, one that is very endearing. Adding to this is the enjoyable party recruits and the protagonist’s partner in crime, Sherlotta. When the player completes certain requirements, they will find roaming recruits on the game’s world map, who can be added to the single player party. Each of them has their own unique traits, and it’s fun to attempt to complete these ‘side quest” achievements.

Sherlotta, on the other hand, is the true star of Echoes of Time – as a voiceless protagonist, you can only do so much to influence the narrative. This woman, on the other hand, grounds the emotional core of the story and has plenty of spunk to spare. Although she doesn’t participate much in the opening act of the game, she eventually becomes an integral part of the narrative, doling out her fair share of plot twists. In terms of content, the game feels much more substantial than its predecessor, though it does recycle boss battles from Ring of Fates as bonus content. Even so, the systems here are much deeper and enjoyable, the locales more varied, and the story more engaging. 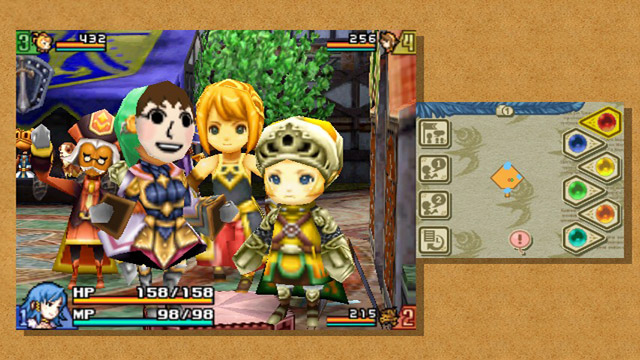 Then, of course, there’s the online multiplayer. While not the most robust matchmaking system, players could choose between world matching, friend matching, and domestic matching. World matching was general teaming, friend matching allowed players with friend codes to meet up, and domestic matching was local. Wii and DS systems could play cooperatively, but DS systems could not host a multiplayer match if playing alongside a Wii system. Players could send preset messages to one another, and could play through New Game Plus and New Game Double Plus together.

The best part of this multiplayer system was that players could switch between this and single player via save points, which were scattered across the game’s dungeons and towns. Even with its impressive online offerings, Echoes of Time seems to be designed more as a single player experience, at least, in terms of dungeon design. While Ring of Fates had many dungeons throughout its campaign where players were expected to have three to four characters in their party, Echoes of Time requests that players recruit other party members, but it doesn’t demand it. This means that multiplayer can sometimes feel like a group surmounting challenges in a line. Although there’s some clever platforming in these dungeons, it needs to be done neatly and in order.

Out of the DS duo, Echoes of Time gets closer to the feel of the first Crystal Chronicles, largely due to its increased customization and enhanced multiplayer. Its story is certainly more bizarre, and I’d prefer not to spoil the better parts of it, although there are some time travel shenanigans and tearjerkers in there. With the release of this game, it felt like the Crystal Chronicles series was right where it needed to be, and any improvements to the norms that Echoes of Time would make the co-operative dungeon crawler even better. But the Wii version of this game came with a little bonus- a trailer for the NEXT Crystal Chronicles title, a game that had been in development for some time.

That will be the subject of our next, and likely final installment to this saga. And boy, is it a doozy.

I skipped this one, sadly. Sounds like that was a mistake. With the death of Nintendo WFC, multiplayer would be inaccessible. Sounds like the single player game might be worthwhile though, and hey, I have kids and multiple Wiimotes…