Coming from someone who loves Role-Playing Games, there is a particular niche in the genre that I often feel goes under-appreciated. Rarely do you see people praise the way some titles take inspiration from their tabletop ancestors. In a time before the console wars, motion controls, and E3 hype trains, RPGs like Dungeons and Dragons and Warhammer were played among friends late into the night. Many still engage in this sort of communal, character-driven role-playing, but the dice mechanics, card drawing, and luck-based mechanics of these games have made their way into the electronic realm, as well. Since Role-Playing Games were originally developed in an attempt to faithfully recreate the campaigns of tabletop design, it only makes sense that their dramatic, fate-skewing combat and negotiation checks should translate over, as well. Only a handful of RPGs on the Nintendo Switch embrace this philosophy in earnest, however. Needless to say, they’re almost always a rip-roaring good time.

So what better way to celebrate these ambitious titles than with a list championing some of the finest examples? Hold onto your dice as this list gets rolling, your chances of having a great time with any of these titles is highly likely. “Role-Playing Games inspired by tabletop games” is a bit of a mouthful, and could be interpreted in many ways, at that. Our goal is to highlight examples of games where mechanics that are usually seen in tabletop games find their way into the experience. Usually, that means any sort of electronic interpretation of a physical concept, like cards, spinners, dice, and the like. Don’t worry, we’ll make sure to point out what elements appear in each game, and why they’re so neat!

And if you feel like playing the ultimate love-letter to tabletop RPGs, just write out the first letter from each sentence of the previous two paragraphs. With that said, let’s get cracking!

The Warlock of Firetop Mountain 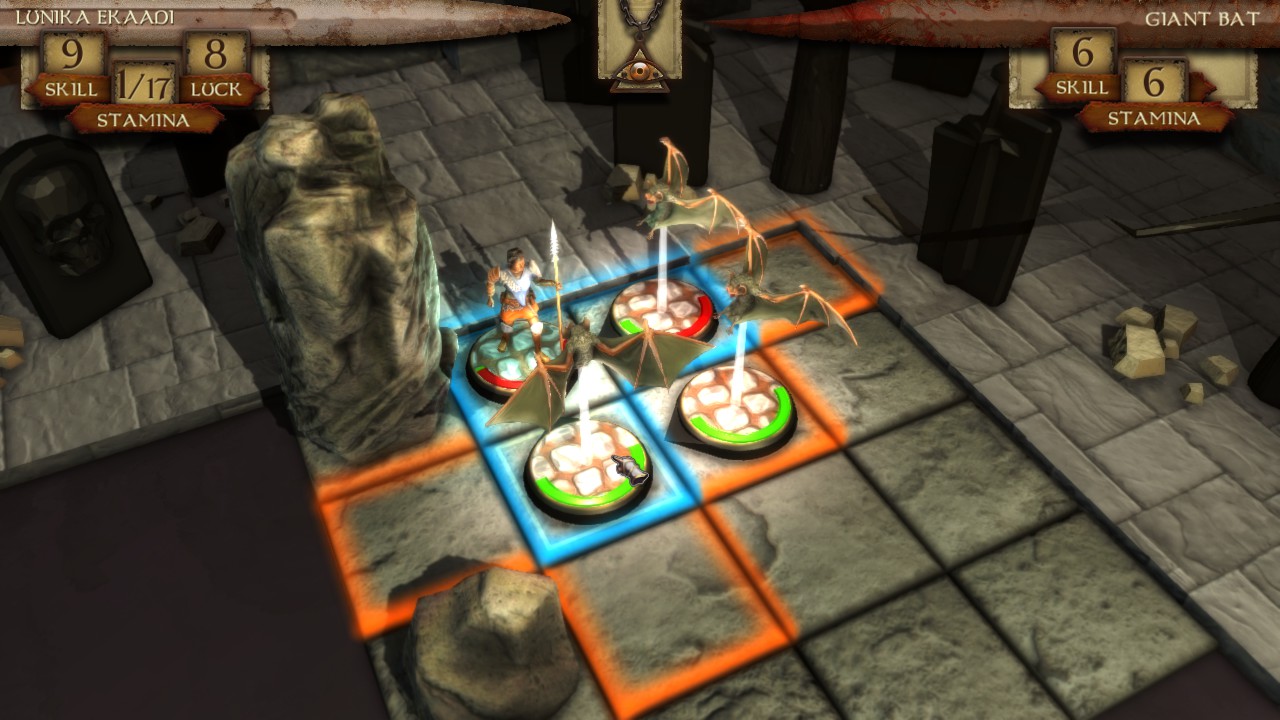 Starting off the list is a game that evokes the best of grandiose dungeon master storytelling with all the frustrating and tense action of dice rolls and skill checks. Each of The Warlock of Firetop Mountain’s many playable characters have their own unique attributes and objectives for storming the titular dungeon, making some of its halls a welcome challenge and others a nerve-wracking uncertainty. Though the dungeon itself is rigid in terms of exploration, the many dialogue options and moments involving skill checks allow for a multitude of scenarios to unfold, so understanding the nature of your playable character is key. Are you agile enough to dodge a hidden trap? Can you brute force a door down? Will you slip by unnoticed thanks to your luck? These mechanics blend with combat, which is a game of chess all in itself. Literal game pieces shift around a small grid, but damage can be avoided or overcome thanks to a unique dice-rolling clash mechanic, further enforcing the game’s tabletop roots. With plenty of narrative content and objectives to fulfill, this game is worth a look for fans of choose-your-own adventure books or short DnD campaigns. 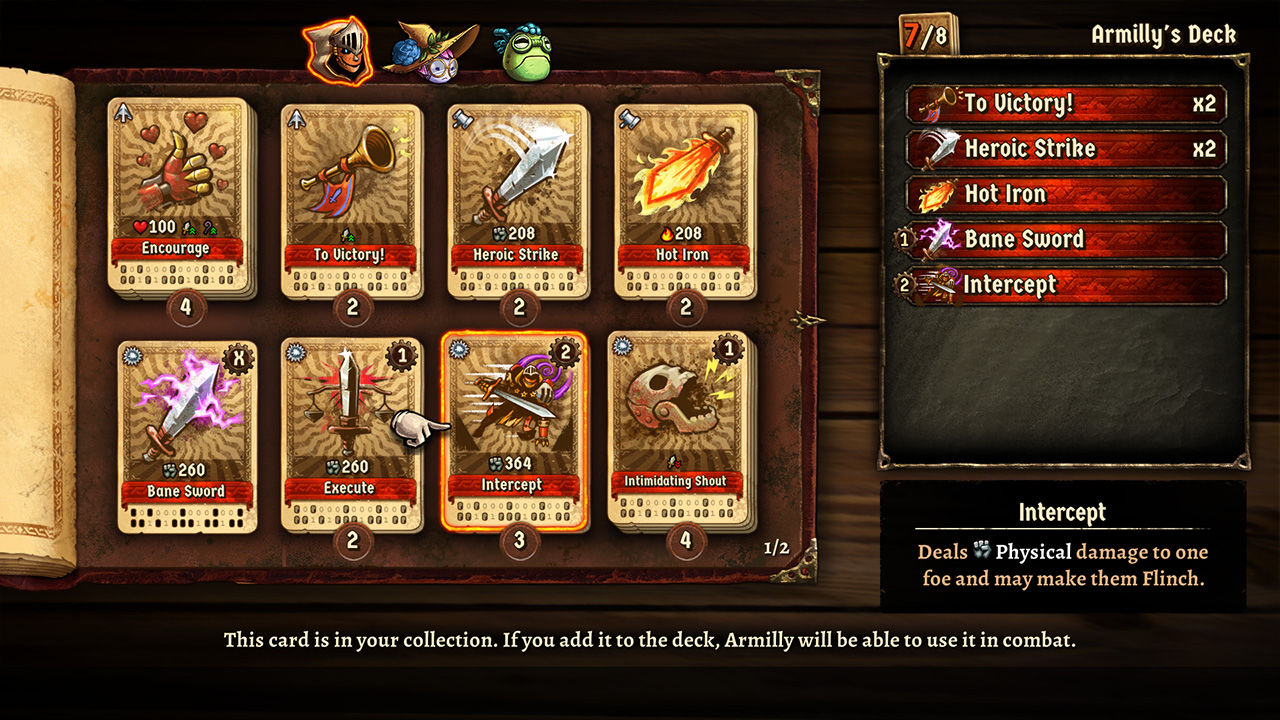 Image and Form knows what obsessive personalities want, and what obsessive personalities want is optimization. SteamWorld Quest’s deck-building combat system integrates the unpredictable nature of card game draws with the concept of resource management. Any deck is made of proportional parts, and as long as those parts possess synergy with one another, the end result can be a smashing success. A good quarter of your playthrough can be spent theory-crafting and experimenting with deck combinations across all five of SteamWorld Quest’s card “types,” but creating a deck that uses a variety of options to take out a multitude of threats is a reward in itself. The game’s challenge coliseum takes this idea to its logical extreme, testing players with specific scenarios and enemy combinations in order to push players to the limit. Oh, and it’s ALSO a full-fledged, stat balancing, party-management, and equipment-selection Role-Playing Game, atop that. 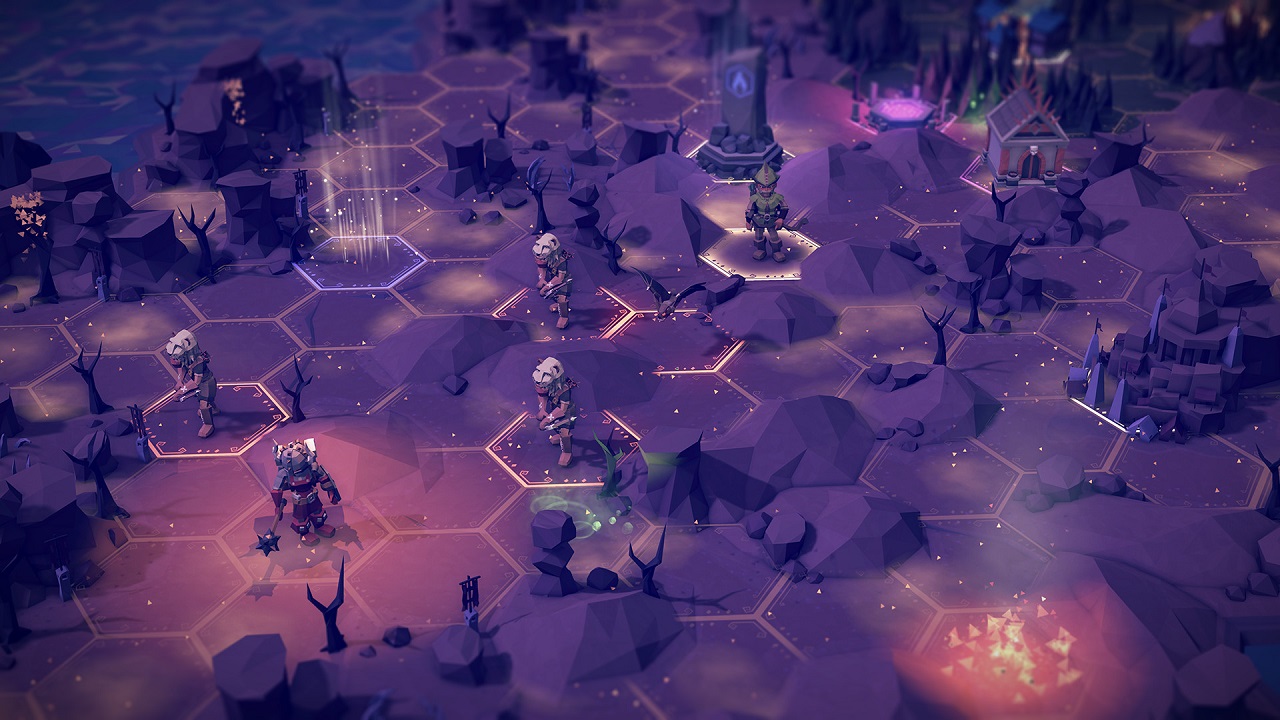 If one were looking for a full-package board game on their Switch, they need look no further than For the King. This tabletop inspired title is equal parts Role-Playing Game and hex-based, competitive and cooperative experience. While some of its game modes offer a team-based experience, traveling across randomly-generated worlds in hopes of completing mini-campaigns, others allow players to tussle with one another as they attempt to complete the same objective. The game’s percentage-based attack structure might seem a bit alien on the surface, but tabletop veterans will note its similarities to the intersection between dice-rolling and equipment-selection. The end result is a game that can sadly only be enjoyed by three players maximum, but offers a huge amount of customization and addictive gameplay. 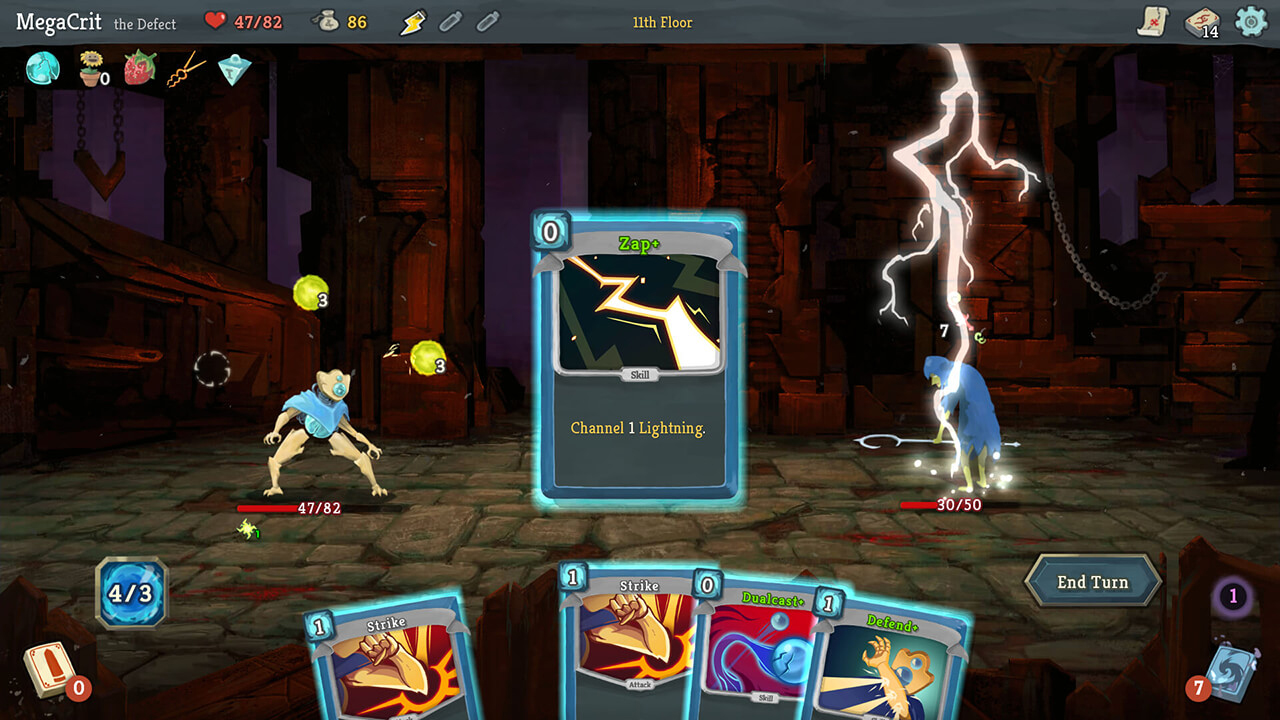 This rogue-like offers up fairly predictable encounters and dungeons, but the truly random factor comes from the deck composition of each run, as players slowly become accustomed to the three playable characters and their unique deck mechanics. While you have a variety of cards to choose from, each comes with its own commitments and potential dangers. Stacking your deck too much might result in over-saturation and failure, but not having effective-enough cards as you climb the Spire might also result in your undoing. Slay the Spire’s daily challenges also offer plenty of fun and unique scenarios that might snowball into unstoppable combinations, or truly test the player’s ability to problem solve on the fly. Either way, optimization similar in nature to SteamWorld Quest is the objective here, though these two card-based RPGs could hardly be considered twins in any other way. 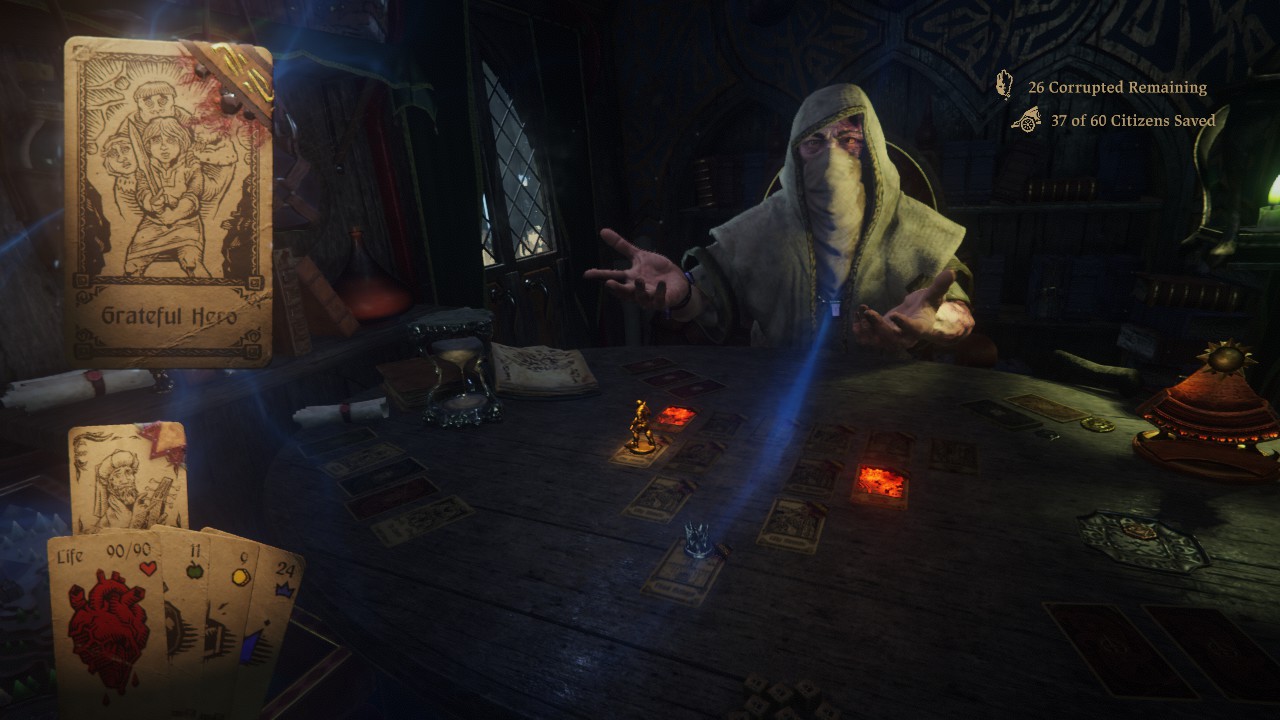 With the recent closure of Defiant Development, it feels all the more necessary to bring the masterpiece of a game back into the spotlight. Hand of Fate 2 feels like a game that, barring its combat segments, could exist in physical form- that is, of course, because it technically does. Its unique mixture of deck-building, dice-rolling, luck-pushing, reflex-testing gameplay is layered atop traditional RPG stat-balancing and a challenging, high-tension combat system that evokes a more punishing variant of Rocksteady’s Arkham games. There is so much depth to its mechanics and systems that its staggering amount of missions hardly ever feel repetitive, asking careful consideration of the player’s resources as well as specific goals with crucial rewards. There is no other game quite like Hand of Fate 2, except maybe its predecessor, which feels like a love-letter to all things tabletop in a completely fresh-looking package. It is more than worthy of its price of entry, and a title deserving of any RPG enthusiast’s attention.

There are still a number of titles we didn’t have time to include on this list, as well as some who didn’t quite make the cut due to their own issues. Have you come across any other RPGs with excellent tabletop mechanics? Feel free to share them in the comments below.

I love the mixture of tabletop RPG and action RPG that Hand of Fate 2 has.

Board/card games teach important social skills, such as communicating verbally, sharing, waiting and taking turns. It can also foster the ability to focus and lengthen one’s attention span by encouraging the completion of an exciting, enjoyable game. Check this newly found card game https://lagimcardgame.com/ and see how interesting and creative it is.