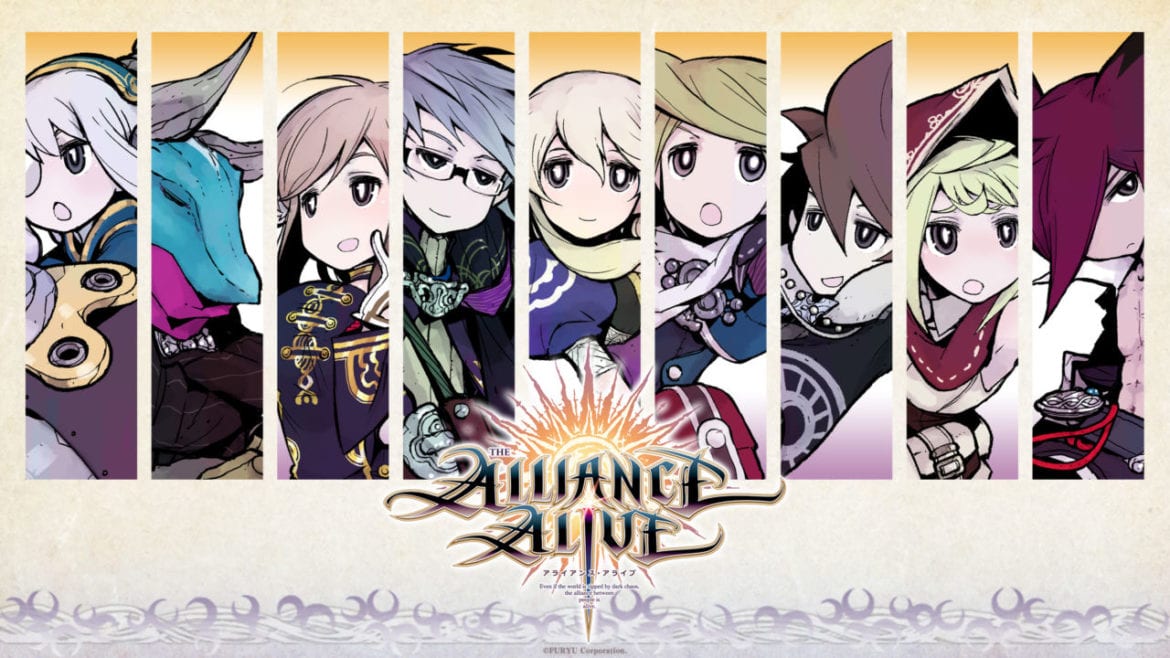 The unexpected announcement of an HD port of 3DS swansong The Alliance Alive may come as a surprise for some, though it fills me with nothing but excitement. For all of those who pine for an RPG that reaches the same heights as classic titles, I offer The Alliance Alive as my own tribute- it is a title with ancestry deeply rooted in the history of the genre, with mechanics that appeal to veterans and newcomers alike.

With a crack team of RPG veterans at the helm and the intention of creating a title with more open-ended and strong role-playing similar to Ultima and Wizardry, the end result is a game that balances narrative twists and turns with solid gameplay. The Alliance Alive is not an easy game to describe, but hopefully I can do the title justice for all of those considering jumping in for the first time on Nintendo Switch.

The Alliance Alive is a spiritual successor to both SaGa titles and the previous FuRyu title The Legend of Legacy, games that take the concept of “natural stat increase” to their logical extreme. For those who aren’t familiar, stats in these titles increase based on the role that party members play in combat, with The Legend of Legacy possessing a mechanic called “Awakening,” where skills will activate when players continue to utilize special attacks with their equipped weapon.

While this might seem like a big gambit, it coalesces perfectly with the Talent Point system, which is a specific form of experience that players gain upon defeating enemies. Players can enhance the likelihood of their weapons skills awakening, reduce MP points for skills, and unlock various other abilities that help drive specific characters into highly specialized roles. Players can also seal specific abilities in order to power up those that they use more consistently, though this relies heavily on how many abilities they have available.

When in battle, playable characters may take specific stances on the battlefield as well as positions. The 3×5 grid allows five party members to hide in the back row and reduce damage dealt while centralizing their play around healing or ranged attacks, or rush the front and middle rows for defense and attack boosts. Their stance also dictates how they’ll move- attackers have medium speed, but higher damage, supports are fast in order to get healing and damage spells off faster, and defense slows its user, but makes them able to take more damage and spreads their defense abilities across the party.

There’s a constant flux of learning, using, and enhancing new skills via certain stances- a party member’s melee attacks will become stronger as they use them in the attack stance, for example- and exploring the ways that each playable character can diversify themselves and operate within a team is a crucial way that The Alliance Alive differentiates itself from other RPGs. There are times when the party will not all be accessible- it is during these moments when players must maximize the potential of each individual in order to increase their synergy.

Some party divisions are based on narrative necessity, but others are reliant on player decision, and the result is a variety of scenarios where players get the opportunity to experiment. Atop this, there are specific species that are able to use certain abilities like magic, an ignition mode that enhances attack power, weapon shattering final strikes, and then, of course, there are guild abilities.

The Alliance Alive’s guild system is perhaps one of its most defining features, as guilds present around a certain area will telegraph information and abilities to the party while they are in battle. Sometimes, these amount to a single-turn stun that allows the party time to recoup, or they can be massive cannon blasts that clear the field. These are not the only benefits of guilds, however- depending on their placement in the overworld, they grant exp bonuses, automatic enemy identification, armory access, and many other benefits.

Linking guilds together and creating nice, balanced nets can also boost their abilities, so finding spots via searching the overworld is key. And speaking of the overworld, what a beauty it is! The Alliance Alive loves giving players abilities to explore locales, like ornithopters, giant snow bunnies, sky dragons, and giant duck mechs. It’s a complex world, and its multi-tiered design means you’ll be scouring locations in order to find treasure, guild construction spots, and more

The Alliance Alive also features a fascinating and terrifying Water Demon mechanic for high risk, high reward encounters and dungeons. For those familiar with Etrian Odyssey, Water Demons are The Alliance Alive’s version of F.O.E.s, extremely powerful foes who are hard to kill, but lucrative prospects in their own right. Once players gain access to the oceans, they’ll have the opportunity to enter into the domains of Water Demons, where the beasts will attack again and again in simple dungeon formats, but grow in strength with each successful defeat. These are amazing and dangerous opportunities to test your party composition, but also great for grinding out ability growth and Talent Point gain.

As if all of this wasn’t enough, The Alliance Alive has a delightful narrative structure that introduces its impressively large cast in a series of isolated vignettes before mashing them all together for an epic quest. The plot is a simple struggle between good and evil, the oppressed and oppressors, but it’s the smaller pieces of the puzzle and how each character fits into the story that makes the narrative so enjoyable. Imagine the simplistic dialogue of Chrono Trigger, but with a wider cast of bigger personalities, and that’s what you get with The Alliance Alive.

Though it isn’t the technical powerhouse that Final Fantasy XV is, nor does it offer the most traditional combat options like Dragon Quest XI, The Alliance Alive is reminiscent of a simpler time, when RPGs could strike a balance between impressive scope and focused complexity. It may not be the perfect RPG for everyone, but it has enough personality and charm to stand on its own, offering the kind of experience you won’t find elsewhere in the Nintendo Switch library. When you have the chance, I encourage you to take a look at this title for yourself, as you might find the classic you’ve been searching for.

Would it be worth playing on 3DS still?

As far as NIS has revealed, the Switch version is simply a visual upgrade. If you’d like to see the cinematic sequences with a little less blur and the models with a sharper resolution, the HD version is your go-to. It’s still one of the best 3DS RPGs and definitely worth playing there!