So, it’s that time of the year where we dole out awards to games that we’ve played, and like any rational human being with a stable, yet limited income, it is important for me to acknowledge that I have not played every RPG on the Switch this year, and probably never will. It doesn’t make sense for me to throw down the gauntlet for Potato Flowers in Full Bloom and why it is easily the Game of the Year against some degenerate who hasn’t even played it, and the staff at SwitchRPG is merciful enough to acknowledge this and let me go off and write this article instead. As always, I’ll do my best to limit my selections to five categories, but I might toss in some honorable mentions towards the end. In the words of that famous Nintendo RPG mascot Super Mario, “let’s a-go!” 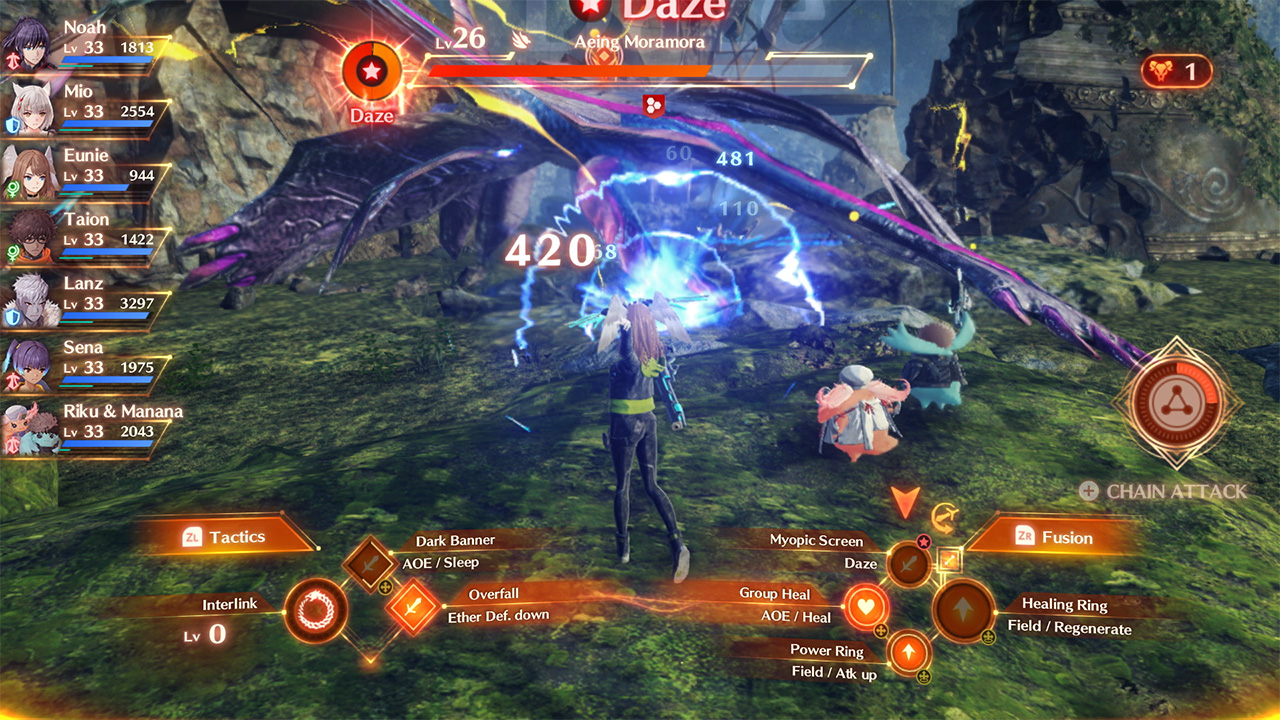 I am well-aware that Nier:Automata released on the Switch this year, and the only thing this game has going for it is that I haven’t completed Nier:Automata yet. I’m not kidding- this game disappoints me half the time and infuriates me approximately fifteen percent of the time. The last thirty-five percent is my unbridled enthusiasm for its narrative and aesthetics, which I have and will argue are some of Monolith Soft’s best work in their respective areas. In narrowing the lifespan of the core cast- and nearly the entire extended collection of characters- Xenoblade 3 manages to touch upon poignant thoughts of legacy, purpose, ambition, and happiness, all the while tackling a challenging and revolutionary bent about the status quo and those of whom we serve. These topics permeate the main and side narrative content in the entire game, and its central musical theme- The Weight of Life- couldn’t be more apt. It might be one of my favorite RPG narratives of all time, it’s just a shame that it’s paired with such awful design elsewhere. 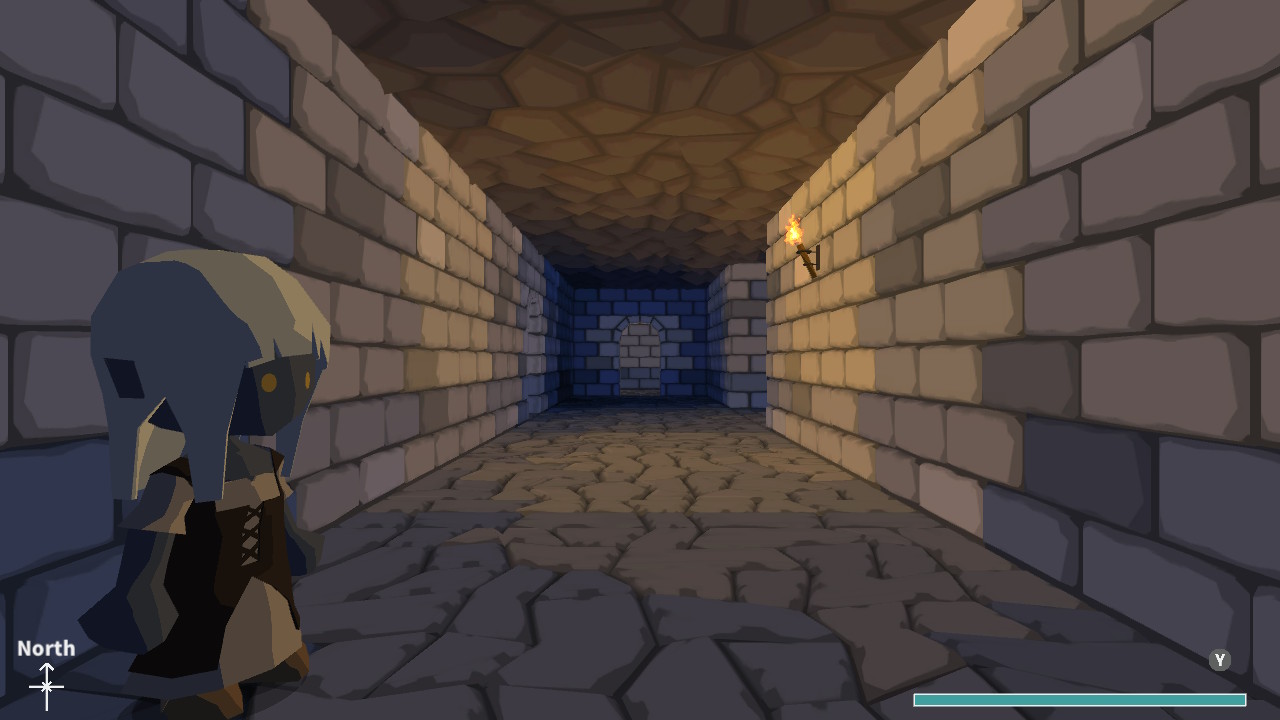 Okay, I swear this will be the only place I talk about this game. If you haven’t played Potato Flowers in Full Bloom yet, what the hell is wrong with you? It’s a relatively cheap first-person dungeon crawler with amazing aesthetics and a wonderful combat system, but its greatest strength is the design of its multiple dungeons. Enemies are deliberately placed, not as deterrents, but rather tantalizing clues as to where you should be headed next. Spot an enemy that’s vastly more powerful than you? Don’t grind out your characters, you can alway return to that section when the time is right.

Multiple levels on each dungeon floor create puzzles and looping paths that demand strict resource management and careful planning upon first encounter, but leave a floor open and ripe for fast traversal and meaningful engagement. Sure, there’s switch-based puzzles, dead-ends, and a light-based torch mechanic that exist to keep you on your toes, and none of these are particularly revolutionary. But the incredibly brisk pace of exploration means that each new enemy conquered and each new square of the map filled are explosive triumphs. In addition, its character progression and the game’s very intelligent core mechanics make it not only one of the best dungeon crawlers I’ve ever played, but also one of the most accessible and economic introductions to the genre. Play this game. PLAY IT. 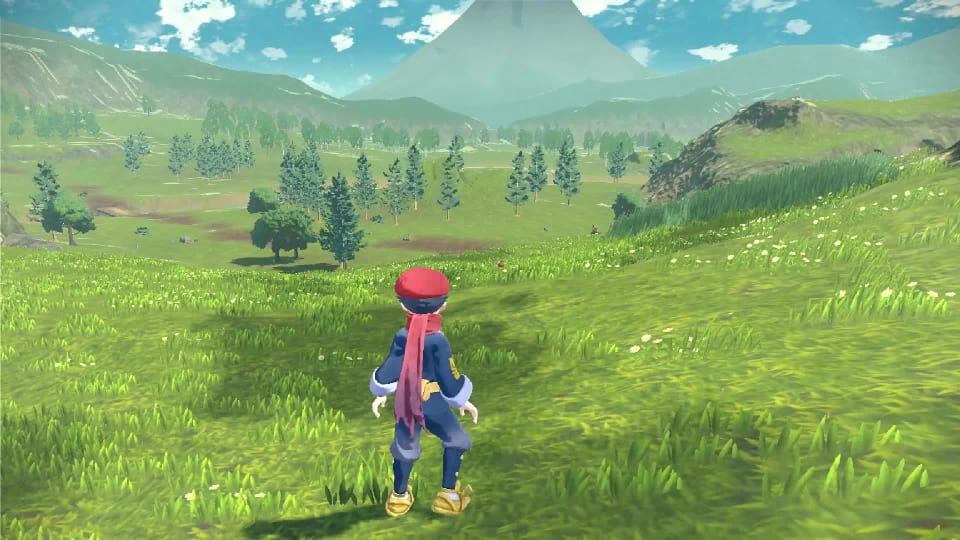 Is Pokemon Legends the best game ever made? Nah. Is it the best Pokemon game? Debatable. Is it the breath of fresh air the series needed after a string of disappointments? Absolutely. While Legends is narrow in scope and tosses more of Pokemon’s conventions out the window than some might expect, it was at least something new- a bold take on capturing, a functional reinvention of the player character’s presence exploring environments, and many other smart revisions to both building a functional Pokemon and enhancing their potential. It’s not the revelation of a brighter future for the series for which many might have hoped, but it is a marked step in the right direction. At the time of writing, we’ve yet to see if Pokemon Scarlet and Violet will stick the landing (update: they did!) 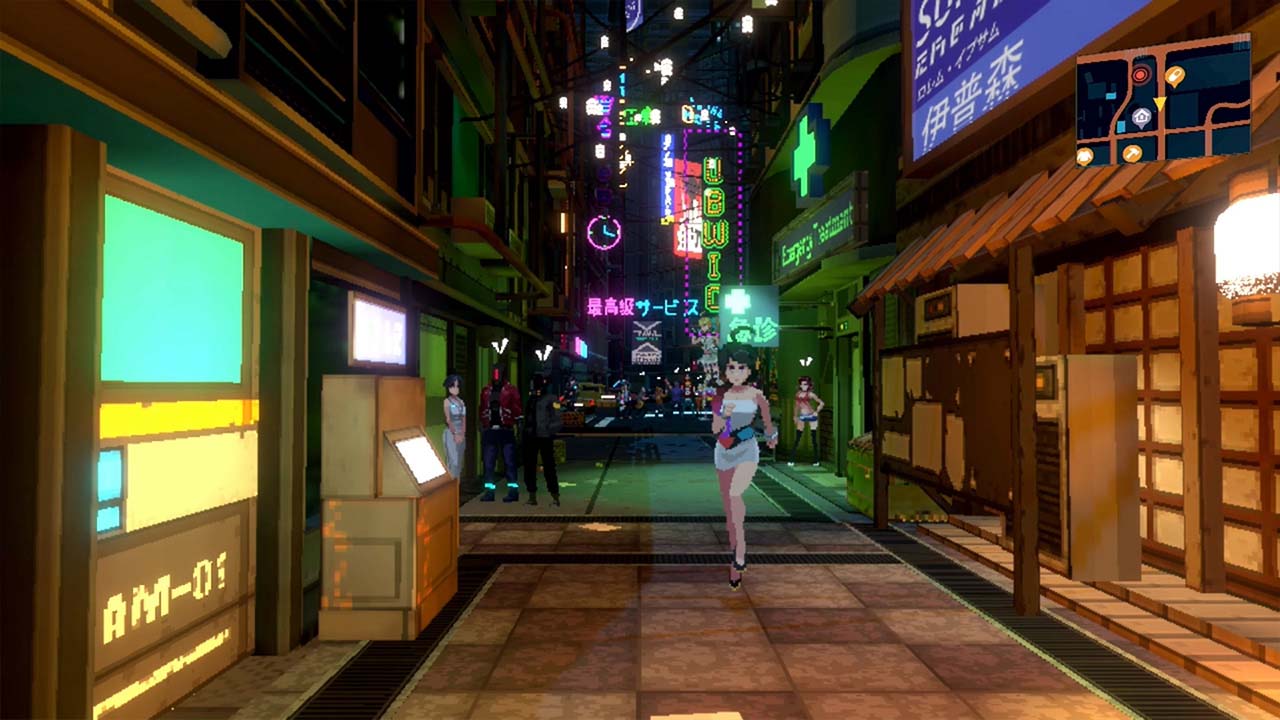 This was a tough call to make, especially since there are so many games on the Switch featuring unique art styles and gorgeous aesthetics. But playing through the opening moments of Anno:Mutationem was enough to make me fall head over heels in love with its unique blend of art assets. Pixel art character sprites are placed in 3D modeled dioramas that offer open-ended and non-linear exploration in a lively world, thanks in part to the pulsating cyberpunk soundtrack and excellent art design.

The lighting effects further enhance the effect upon the character art, making them feel like responsive and tangible objects in the space. While the diorama effect has been achieved in other titles, it is the sharp visual design that brings this entire product together, featuring strong animation and particle effects when in combat and amusing voice acting and character designs throughout. Indie games have to stand out in some way, and although Anno:Mutationem uses relatively simple combat mechanics and platforming, the entire product is elevated by its lovely aesthetics. 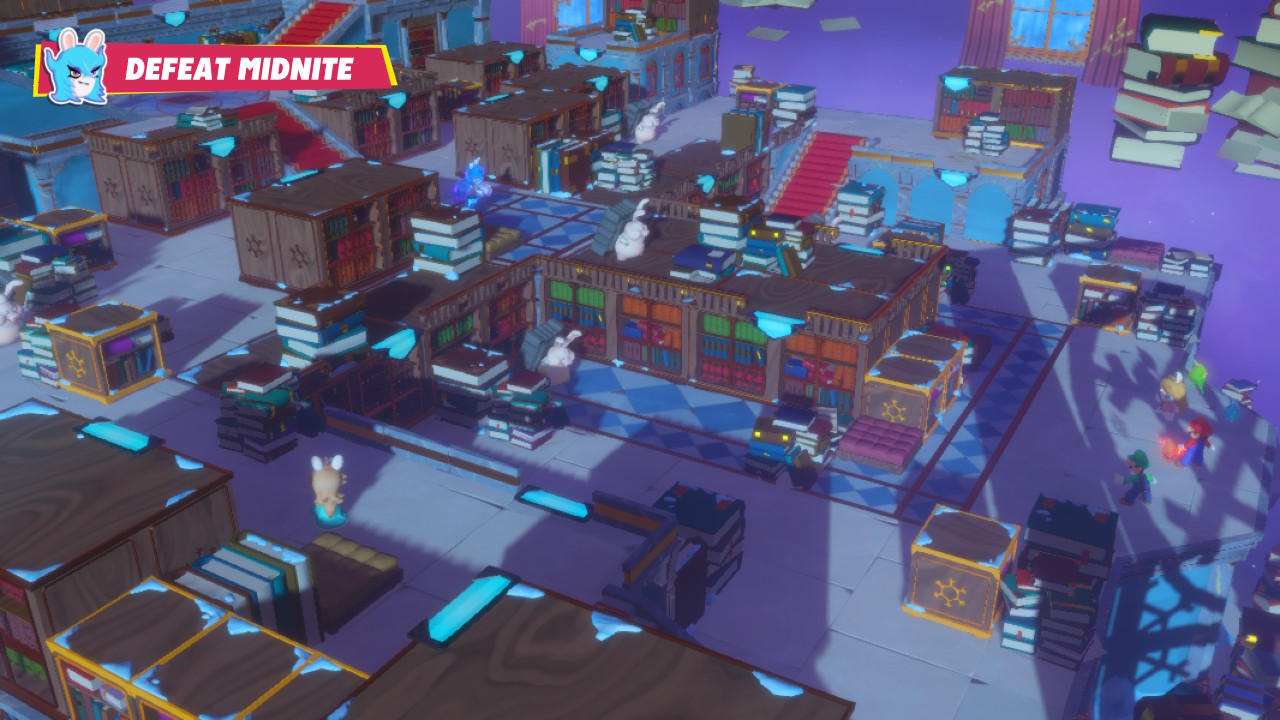 Listen. If you doubted the first Mario + Rabbids and never played it, shame on you. But if you enjoyed the first Mario + Rabbids and haven’t yet played the second game, you deserve the same amount of shaming! While I think that both games are fantastic and feature their own worthwhile quirks, Sparks of Hope is much more bold with its combat, creating tight, single-turn roaming enemy encounters and more grandiose, scripted battles. The addition of Sparks and the variety of team compositions make for a substantial amount of options in battle, with characters from the first game retaining essential parts of their kit while gaining new tricks to play around with. In addition, you get three new character play styles in the forms of Edge, Rabbid Rosalina, and Bowser.

It’s not just the party options that offer strategic variety, however- Sparks of Hope does an even better job of giving the player a fun battlefield environment. Cover and high ground are as important as ever, and using teammates to launch yourself even higher and farther is always relevant. But the game introduces a variety of interactive elements that can extend distance, close off portions of the environment, and complicate combat. Conquering these is the key to victory, but it’s never something that feels tedious, and the development team at Ubisoft has created a system much-deserving of praise. Listen, sometimes we want to play RPGs for reasons other than watching a great story or marveling at high quality music and visuals. Sometimes, we play RPGs because we want to feel the unparalleled sense of empowerment that these games offer. From god-slaying to army-toppling, from dating whoever we want without consequences to mercilessly slaying indigenous wildlife without any semblance of guilt, video games allow us to explore the niche corners of our minds via a controller and a screen. I’m not saying anyone should want to drive a tank, or outfit a heavy artillery weapons platform with insane firepower, or kill giant, mutant ants with any of the aforementioned devices. But I am saying that Metal Max XENO Reborn lets you do those things. And it’s fun. Like, really fun.

From long-distance, high-impact artillery strikes against unassuming enemies, to barrelling past a swarm of aggressive mechanoids in order to net aggro, to knocking giant robots off the side of a building with a rocket launcher, Metal Max offers a bizarre and imperfect foray into a post-apocalyptic wasteland that gives you a tank within the first five minutes of gameplay. If that doesn’t sound fun, well, I guess that’s just my very weird opinion.

Game of the Year: Pokemon Scarlet and Violet 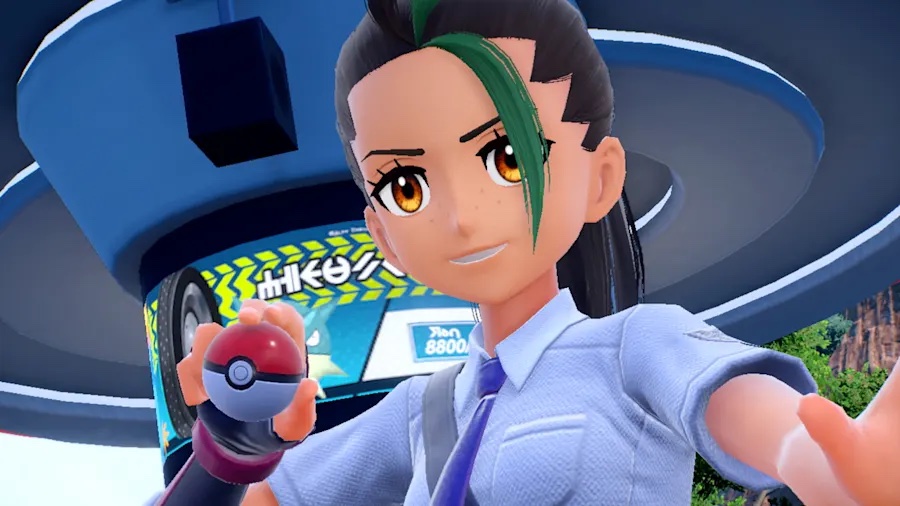 I don’t think that Scarlet and Violet are the best-performing Pokemon games, and I don’t think anyone would argue that. I don’t think that they are aesthetically on the same tier as other Switch or even modern JRPGs, except maybe in the music department. But I do think that, while playing these games, I have finally fallen in love with Pokemon again. And that is such a satisfying feeling, and it’s one that is most certainly rooted in bias. But I don’t care. Yes, the motorcycle Pokemon are stupid! I hate them with a passion from a conceptual standpoint, but I love the exploration they offer, as it is more straightforward and enjoyable than the fast travel systems of Legends Arceus. The motorcycles are also decent characters, which is a surprising thing to say about a Pokemon game. Yes, the game has an awful frame rate and excessive pop-in! That doesn’t mean the world itself isn’t fun to explore, especially when playing with friends. Yes, the gyms aren’t scaled to your current level of progression! Finding them is still a worthy venture in itself, and a good number of the gym challenges are actually very fun – I can’t believe I’m saying that.

Yes, it doesn’t have ALL the Pokemon in it. I was wowed at the level of variety the game offered in its opening routes, and have been consistently impressed with the very large number of Pokemon that can be battled, caught, and evolved. All of these positives wouldn’t be what they are without a strong and stable online component, finally allowing the game to feel like a shared world with multiple objectives and a strong co-operative element. This is what I dreamed Pokemon could be, and feels like the worthy evolution that the series has needed since the transition to full 3D back on the 3DS with Pokemon X and Y. It feels good to be a Pokemon fan again, and the future finally does feel bright… even if it doesn’t always look bright.