Iconic and beloved developer/publisher Square Enix has had a longstanding history with Nintendo. While the fervor of their partnership has ebbed and flowed over the years (as highlighted by this excellent article series by Phil), the Switch would once again mark a new era of excitement and domination for Square Enix on a Nintendo platform.

In this article, we’ll be looking at the history of Square Enix on the Nintendo Switch, before speculating on what may be coming in the near future. Please keep in mind that this will only be covering Square Enix RPGs that have been released or announced for North America (sorry Dragon Quest X).

2017 was a relatively uneventful year for Square Enix and the newly released hybrid console. While they would only release two games the entire year, Square Enix boldly pledged support from day one by way of Tokyo RPG Factory’s I Am Setsuna. Romancing SaGa 2 would cap off the year to little to no fanfare, but would remain a beacon of hope for what could follow shortly thereafter. 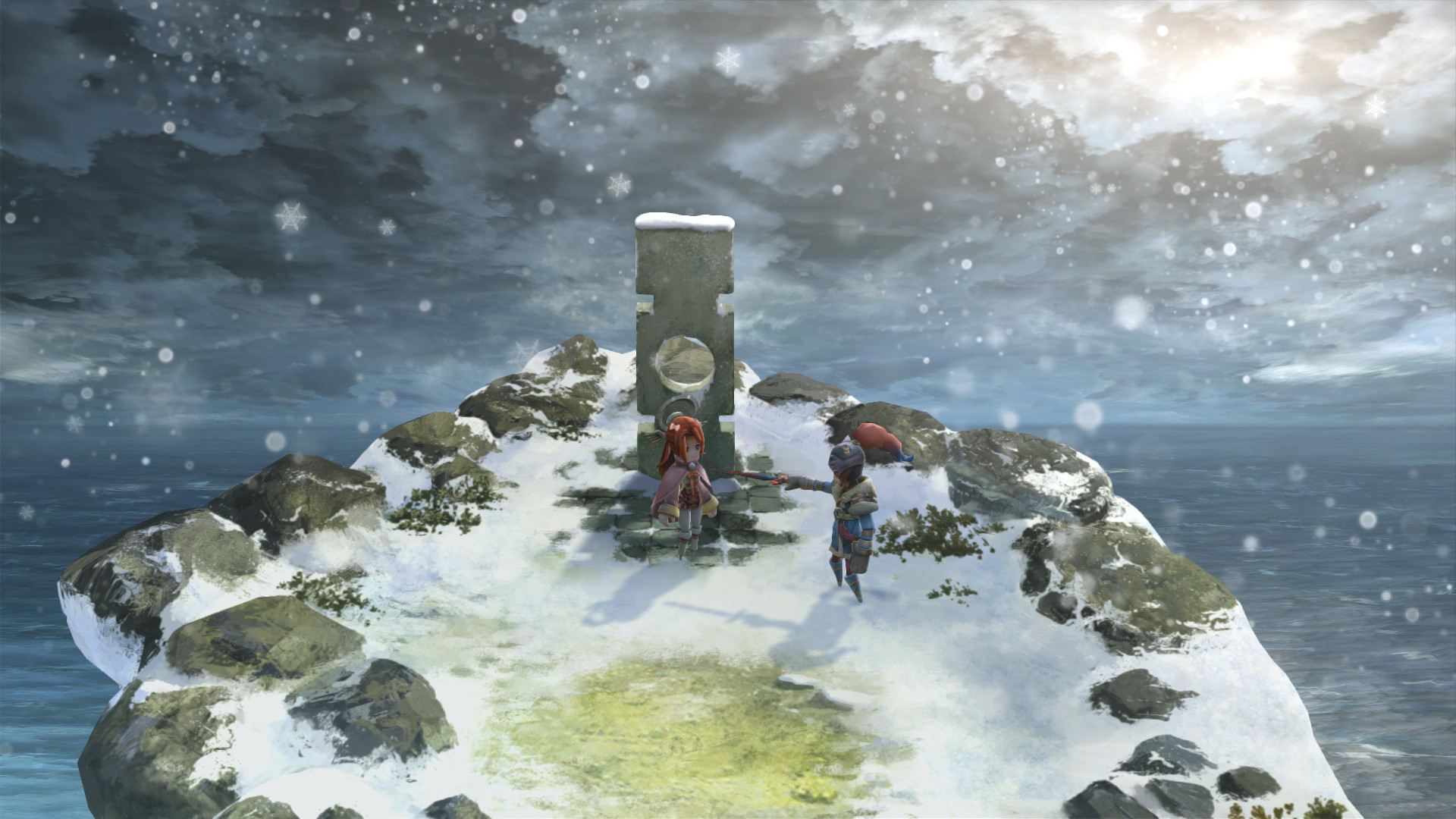 My favorite Tokyo RPG Factory game, but that isn’t saying much…

Romancing SaGa 2 had never been officially localized for home consoles since its 1993 debut in Japan (iOS and Android did receive it a year prior, however), so that was pretty big in itself. And even though it would release simultaneously on all major console platforms, it showed that Square Enix was willing to take risks on even the most obscure titles in their catalog.

With the Switch selling millions of units in its first year, there were high hopes that Square Enix would double their efforts in supporting it in 2018. While they wouldn’t set the release calendar on fire, they would come out of the gate swinging with Lost Sphear in January, which would unfortunately not be as well-received as its predecessor, I Am Setsuna. They’d follow that up with a distinct change of pace in the form of a port of Dragon Quest Builders – a risky take on the massively popular/saturated Minecraft-like genre that ultimately paid off well. 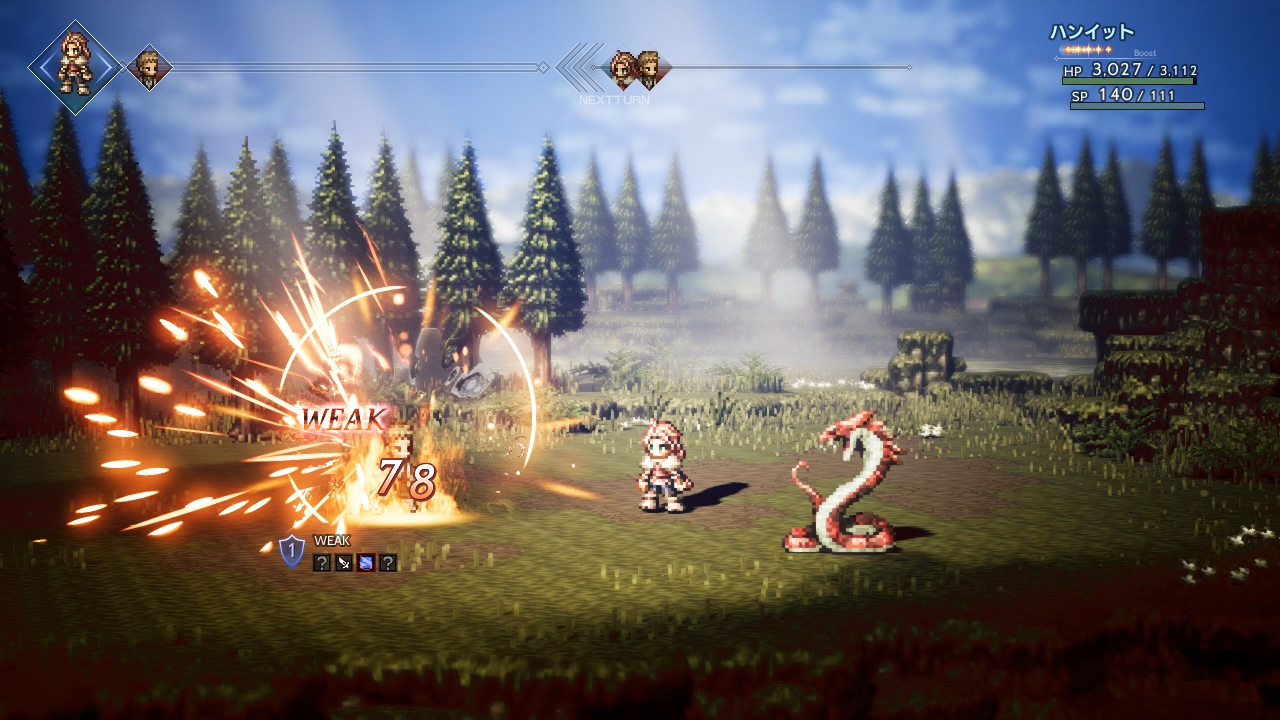 RPG fans would have to wait until summer for the next release, but for many, it was well worth the wait. Octopath Traveler took the world by storm with its stunning visuals, grandiose soundtrack, and Bravely-esque combat. This would easily be the standout release for Square Enix in 2018…but it wouldn’t be their final one.

In an attempt to maintain momentum, Square Enix would go on to release the pocket edition of Final Fantasy XV in September, the definitive version of The World Ends With You in October, before finally ending the year with World of Final Fantasy Maxima in November. Whether or not you cared about or enjoyed these games, Square Enix’s commitment to providing a wide array of genuinely unique experiences is not to be understated.

With Square Enix one-upping itself from 2017 to 2018, RPG fans knew that it would only be a matter of time before their titles showed up in droves on the Switch. Sure enough, 2019 would be a massive year for the company. Square Enix started the year off with a bang by announcing a ton of ports for classic RPGs, several new localizations, and a couple of brand new titles. 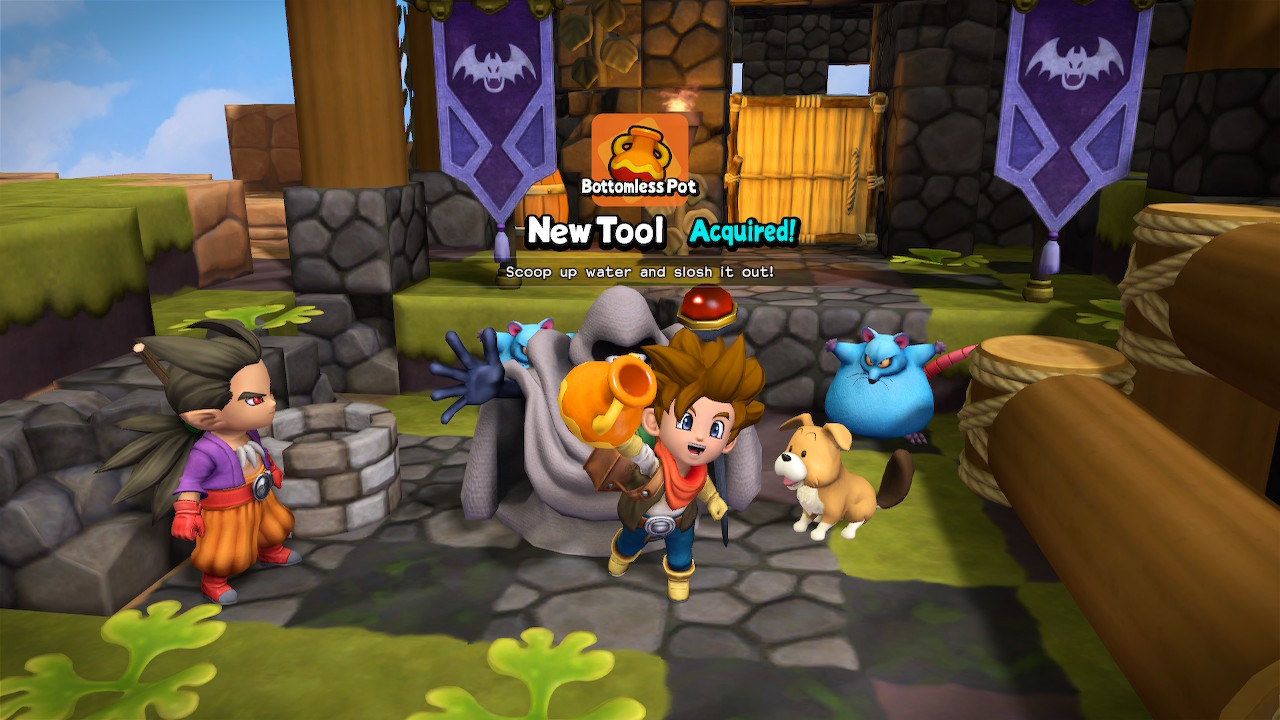 Great sequel to an amazing game.

Beginning with Final Fantasy IX, Chocobo’s Mystery Dungeon, and Final Fantasy VII (in February and March respectively), they would go on to release two titles in April (Final Fantasy X / X-2 and Final Fantasy XII), two in June (Collection of Mana and The Last Remnant), before focusing in one something new the form of Dragon Quest Builders 2 in July, and Oninaki in August. Dang.

Square Enix would close out the final portion of the year by releasing four Dragon Quest games (I, II, III, and the long-awaited XI) alongside Final Fantasy VIII in September, a freshly-localized Romancing SaGa 3 and SaGa Scarlet Grace: Ambitions in November and December respectively, and finally Star Ocean: First Departure R on December 5th. Woooow. With such an incredible year, there’s no way they could top it in 2020, right?

2020 was more or less a crap year for everyone due to circumstances we’re all well aware of at this point. Despite that, Square Enix would still go on to release three (technically five) games on the Switch in 2020. 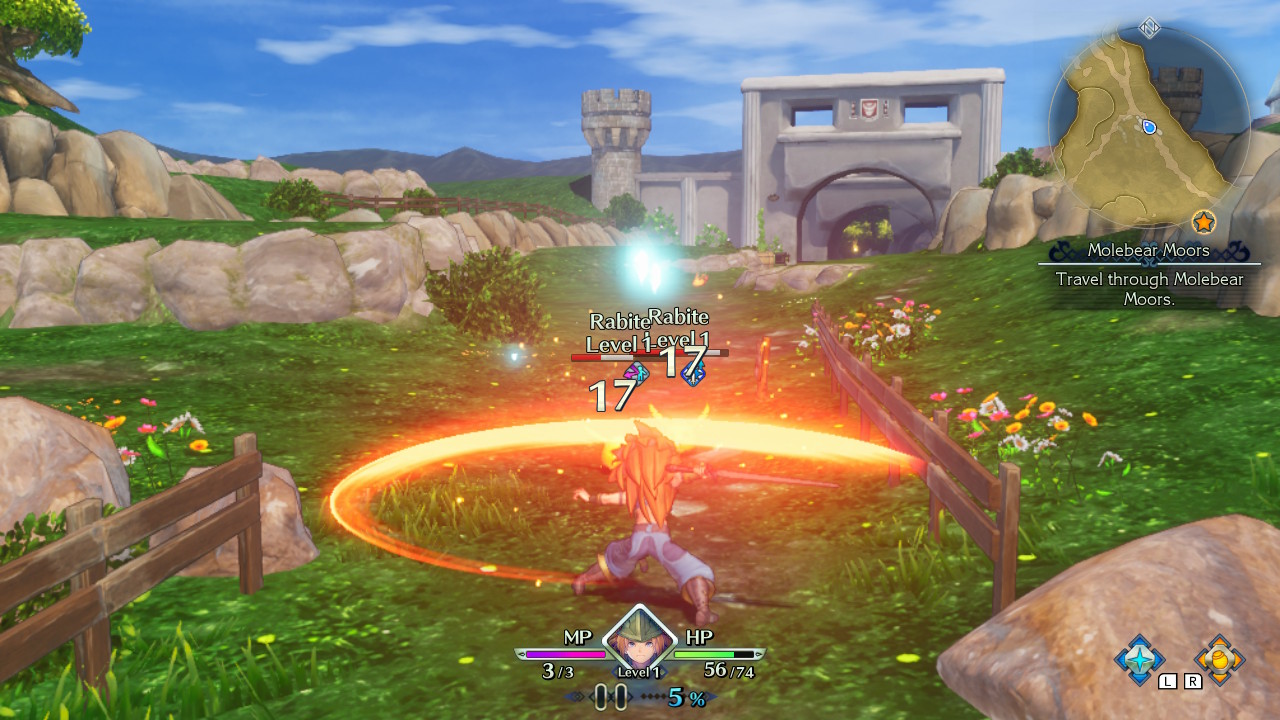 A solid remake, and one of my favorites from 2020.

The Trials of Mana remake would kick things off in April; an entry thats sales apparently far exceeded the company’s expectations. This would be followed up by the highly anticipated (but universally panned) Final Fantasy Crystal Chronicles Remastered in August. Finally, a trio of classic Game Boy RPGs under the guise of Collection of SaGa would arrive in December.

Coming off the high that was 2019, 2020 was certainly a little disappointing for Switch RPG fans. But perhaps it was a blessing in disguise, and that some breathing room was due after the gargantuan year that was 2019. There’s always next year, right?!

One thing the global happenings did encourage was to stay at home and play games, which certainly helped the Switch have another massively successful year in sales. As of December 31, 2020, the Switch has sold almost 80 million units, all but ensuring that the console will remain a hotbed for all genres of games, let alone RPGs, for the foreseeable future. Will 2021 prove to be another relatively slow year for Square Enix, like 2017 and 2020, or will it end up giving 2019 a run for its money? 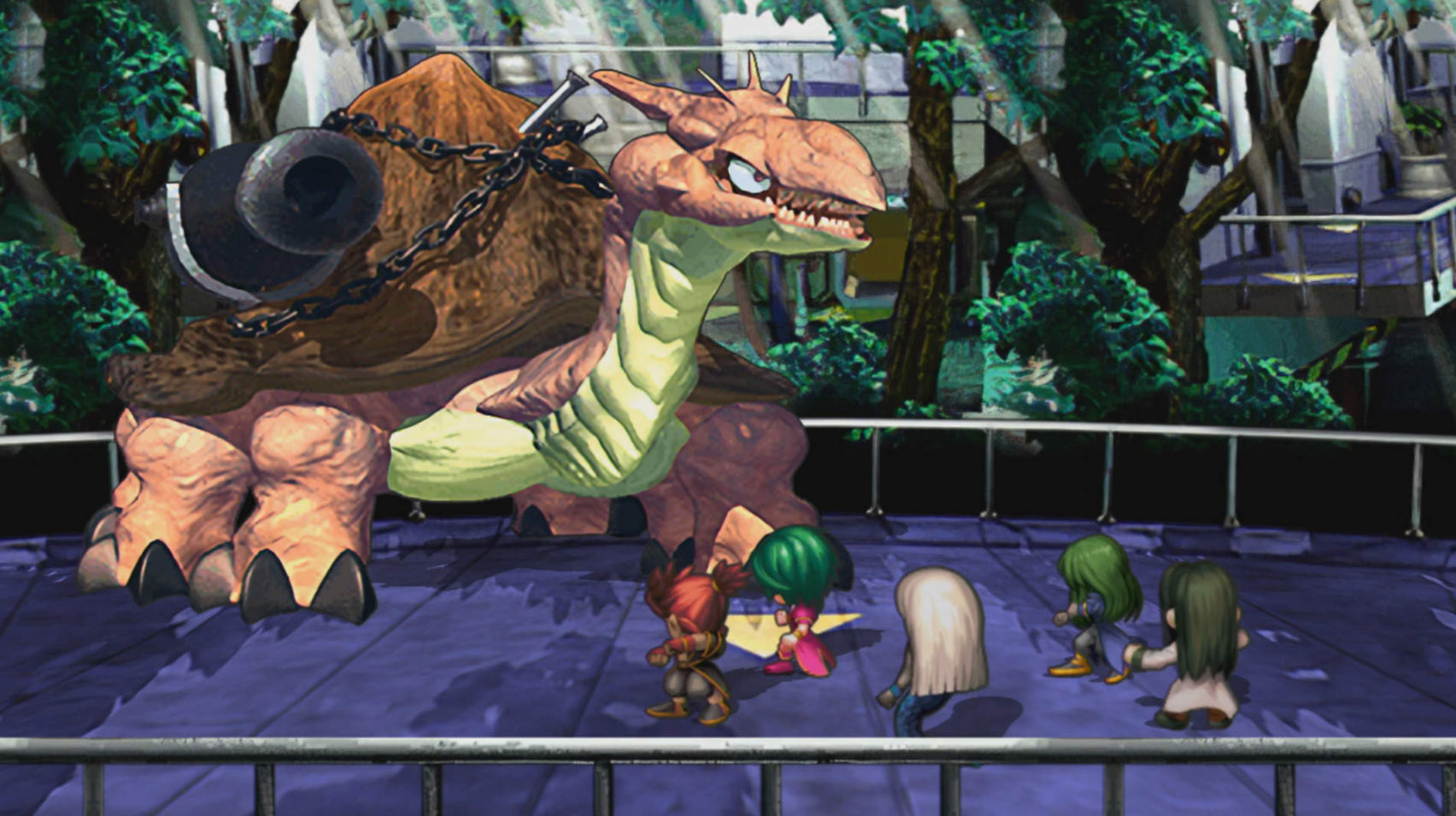 My inner 7th grader is screaming at the remaster nobody could have ever saw coming!

Hard to say at this point. We started the year off with Bravely Default 2, with SaGa Frontier Remastered releasing in April before the HD remaster of Legend of Mana arrives in June…but that’s about it as far as confirmed releases go. The latter two titles are HUGE, though, showing the company’s ever-increasing support for more of their niche properties. The fact we’re getting SaGa Frontier, let alone a remaster, is amazing in itself.

Square Enix has been silent about many of their vintage titles, notably Final Fantasy 1-6 and Chrono Trigger, so something is definitely brewing there. These are games that are guaranteed to print money even if their ports aren’t handled in the most ideal fashion. I think their silence speaks volumes, however – Square Enix isn’t dumb, and they know that they are sitting on easy money with these titles.

It’s not a matter of “if,” but rather “when” and “how” – these classic RPGs are all but guaranteed to arrive on the console…eventually. Forget Nintendo Switch Online, there’s simply too much money to be made for Square Enix to haphazardly throw them on there.

This game is great. This version, though? Eh.

Because actual money is likely to play a factor here, I sincerely hope that Square Enix doesn’t take the easy way out by releasing lazy ports. If their current track record is any indication of what is to come, then I’m a bit worried. While I thoroughly enjoyed playing through Dragon Quest I, II, III, as well as Final Fantasy VII, VIII, and IX again, we all know they weren’t in their best forms. But hey, I’m a sucker for the RPGs I grew up with, and will gladly buy whatever ports they throw my way, even if their packages aren’t the best. I hope that I’m proven wrong and they handle the next ports with more care, however.

Regardless, I feel that Square Enix has some surprise ports up their sleeve for later in the year, but only time will tell whether they will be of the Final Fantasy variety. If not, more mainline Dragon Quest representation is always a good thing. It’s been a couple years since we’ve seen any new Dragon Quest stuff on the Switch (in NA, at least), so it’s time for them to fix that!

As of this writing, Square Enix has released 28 RPGs on Nintendo Switch, with more arriving this year and beyond. What do you think will be their next step in terms of ports, remakes/remasters, and brand-new experiences? Is there anything really obscure – a la SaGa Frontier – that you’d like for the company to bring over to Switch, whether an existing title or a completely new title in their respective vein? Let me know!

I love Square Enix! They’re definitely one of my favorite publishers on switch. I would LOVE a new Mana game, in the style of the Trials of Mana remake, because I really enjoyed that game. I hope that’ll happen soon, considering they’re putting a lot of love into re-releasing the old games. I would also really like a new Dragon Quest game, because XI was one of my favorite switch games, and I need more like it! It is the 35th anniversary of Dragon Quest, so I’m at least expecting something in regards to that series. I’d probably buy any… Read more »

Trials of Mana Remake was excellent, I agree. And more anything DQ would be amazing!

I would like to see FFT make it to the switch, but I am happy at least we will be getting whatever Project Triangle Strategy will ultimately be called at some point.

Also, a new proper tactical Front Mission game would be great (or port Front Mission 5, since it never made it to North America).

Same. I really want to see FFT (and hope they still bring it at some point) but Triangle Strategy is shaping up to fill that void a bit.

Never played Front Mission but have only heard amazing things!

I know some of them have been a bit lazy, but it’d still love to see more ports of PSX era RPGs. I played many, but I still missed a lot. I’d love to try Vagrant Story and SaGa Frontier 2.