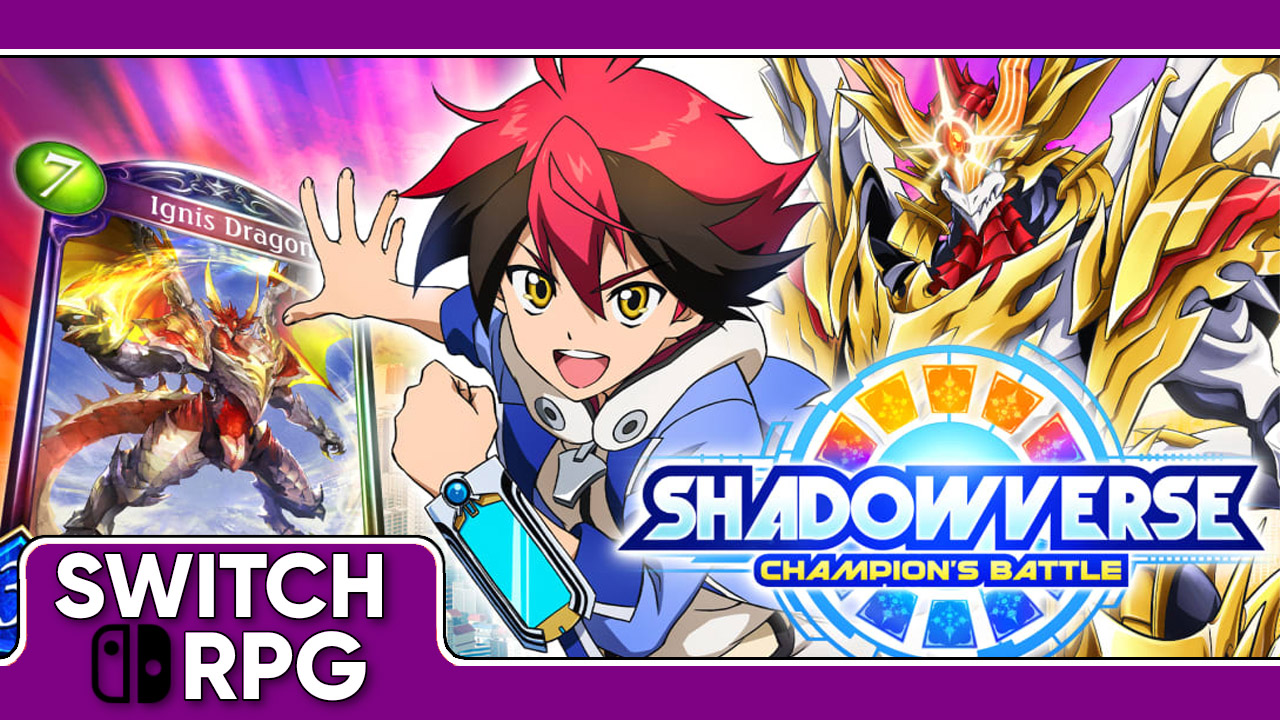 Those that frequent SwitchRPG.com should be well aware of my love for tactics and visual novels/dating games by now, but there is one other genre that you may not know I enjoy just as much: trading card games. While I’m partial to Yu-Gi-Oh, I do enjoy other card games from time to time. So after hearing that Cygames, the creators of Granblue Fantasy, were making a Switch RPG card game based on their mobile card game, Shadowverse, I had to check it out. Here are my findings so far in the demo version of Shadowverse: Champion’s Battle.

Since the card game is the main focus here, it has to be at least decent if you want players to consider playing it. For those unfamiliar with Shadowverse – but familiar with Hearthstone – it is along the same lines of the hit Blizzard card game at a base level (I’ve only played a little bit of Hearthstone myself, but there are obvious parallels even from my limited experience). 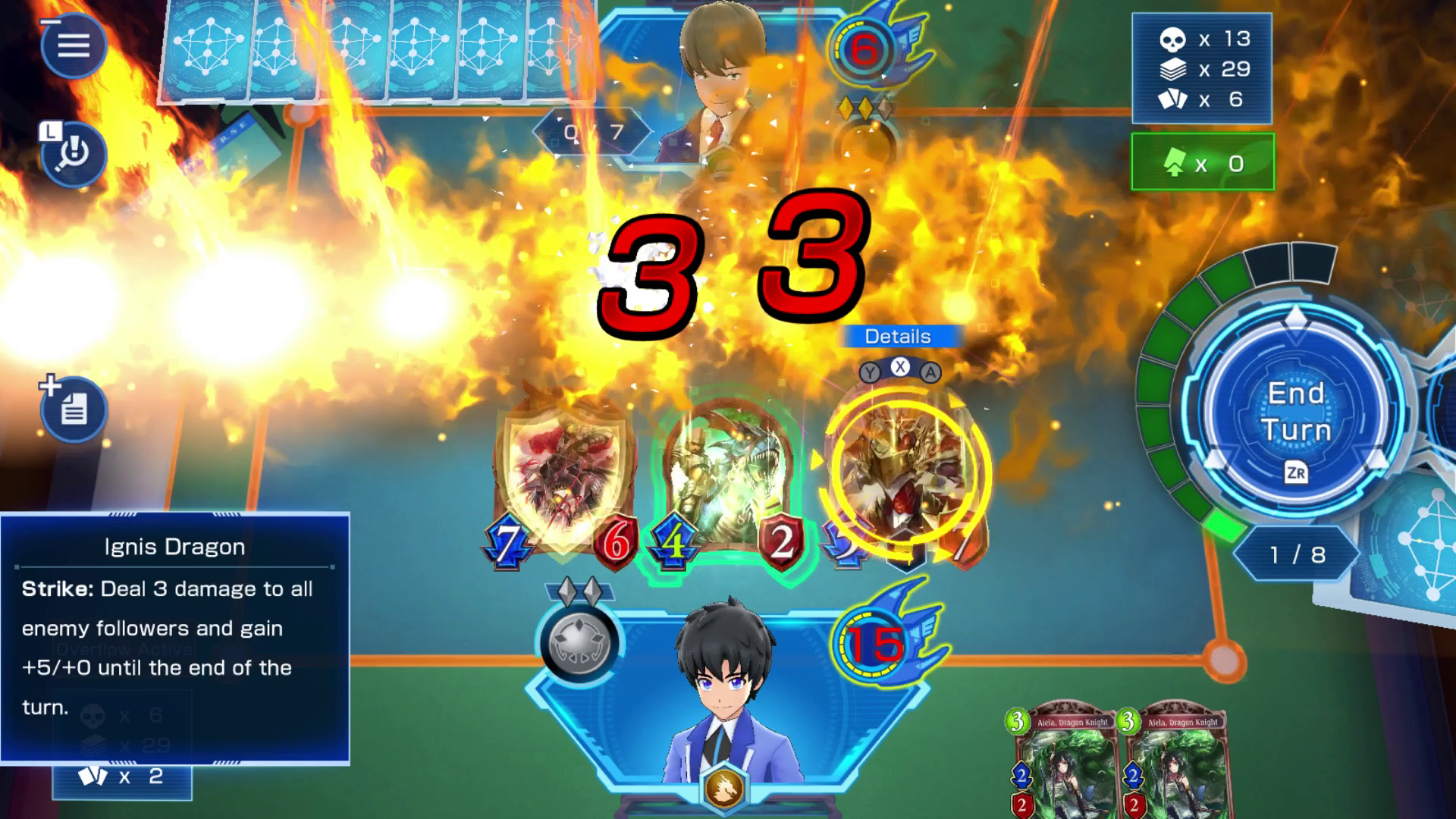 Each player has their own deck, each with their own deck archetype. You can edit your deck outright, but for those not comfortable/interested in making an entire deck from scratch, there are premade decks available called deck codes. You can get new cards from the Shadowverse vendor terminal and from here, you can both buy specific cards or purchase card packs. You can also play against characters in Shadowverse: Champion’s Battle and win cards from them, and every time you reach a certain level in your deck class, you can win cards specific to that archetype.

With the actual card game, you will start off the match with one play point. With each subsequent turn that passes, you will gain another play point. So turn one, you’ll have one play point, turn two you’ll have two play points, and so on. Depending on the amount of play points you have, you can summon a follower whose number matches. If you don’t have any followers that you can summon, then you won’t be able to summon (so you’ll want plenty of weaker followers to help start off your match). When you summon a follower, they aren’t able to attack that turn. There are two other numbers on follower cards: attack and defense. Attack is the attack value of a card while the defense is how many attack points they can take before being defeated. Every time you or your opponent attacks another follower, the attack values are subtracted from the defense value, meaning that both followers in battle will be taking damage instead of just one unit. 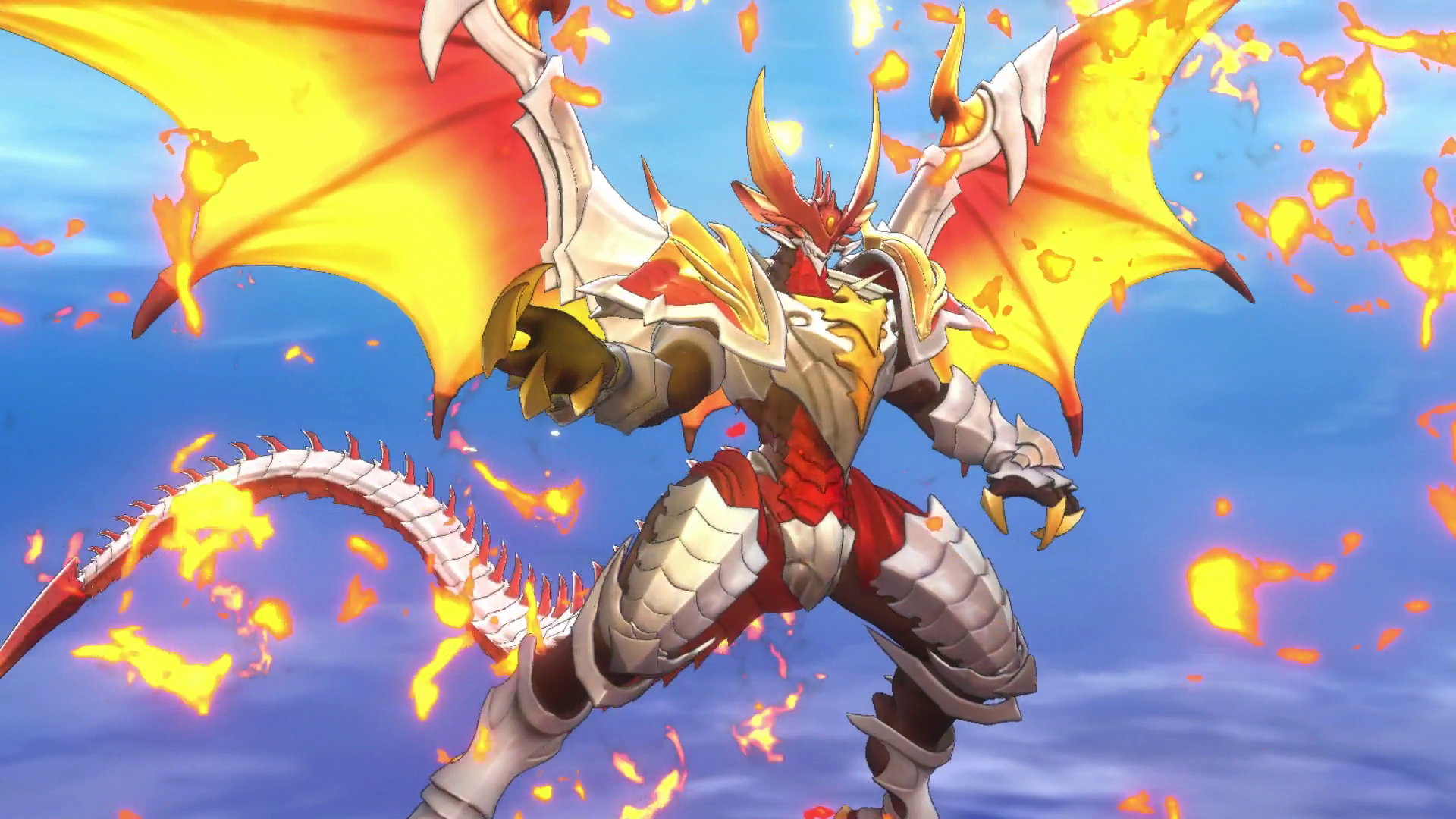 You also have the option to attack the leader, unless your opponent has an effect active that forces you to only attack followers. Every leader has their own amount of defense points and once it reaches 0, that character will lose. You can also lose if you can no longer draw cards from your deck. While you may be motivated to only pay attention to the leader, you’ll want to keep an eye out for your opponent’s field. Field control is very important, and battles can swing one way or another in an instant if you’re able to maintain control of the field.

Along with followers, you also have spells that you can activate, each with their own effects. Some follower cards have effects as well, and some only gain them if they evolve. Evolution is another part of Shadowverse that comes into play after four turns have passed for the player who started second (the player who started first has to wait until the fifth turn). From there, you can use your evolution points to evolve your cards, giving them more attack, defense, and/or effects. And since you can only evolve one card per turn and you can’t regain evolution points after spending them, you’ll need to be strategic about when to evolve.

The “Feel” of Shadowverse: Champion’s Battle

Truth be told, my expectations weren’t very high for this game, not because I thought it would be bad, but I just wasn’t sure what to expect. I didn’t dig too deep into Shadowverse: Champion’s Battle after hearing the initial announcement, so I had no idea what kind of game it would be. While there’s only so much you can do with a card game targeted at children and young adults, my brain still never settled on what I’d be seeing once the game was released. 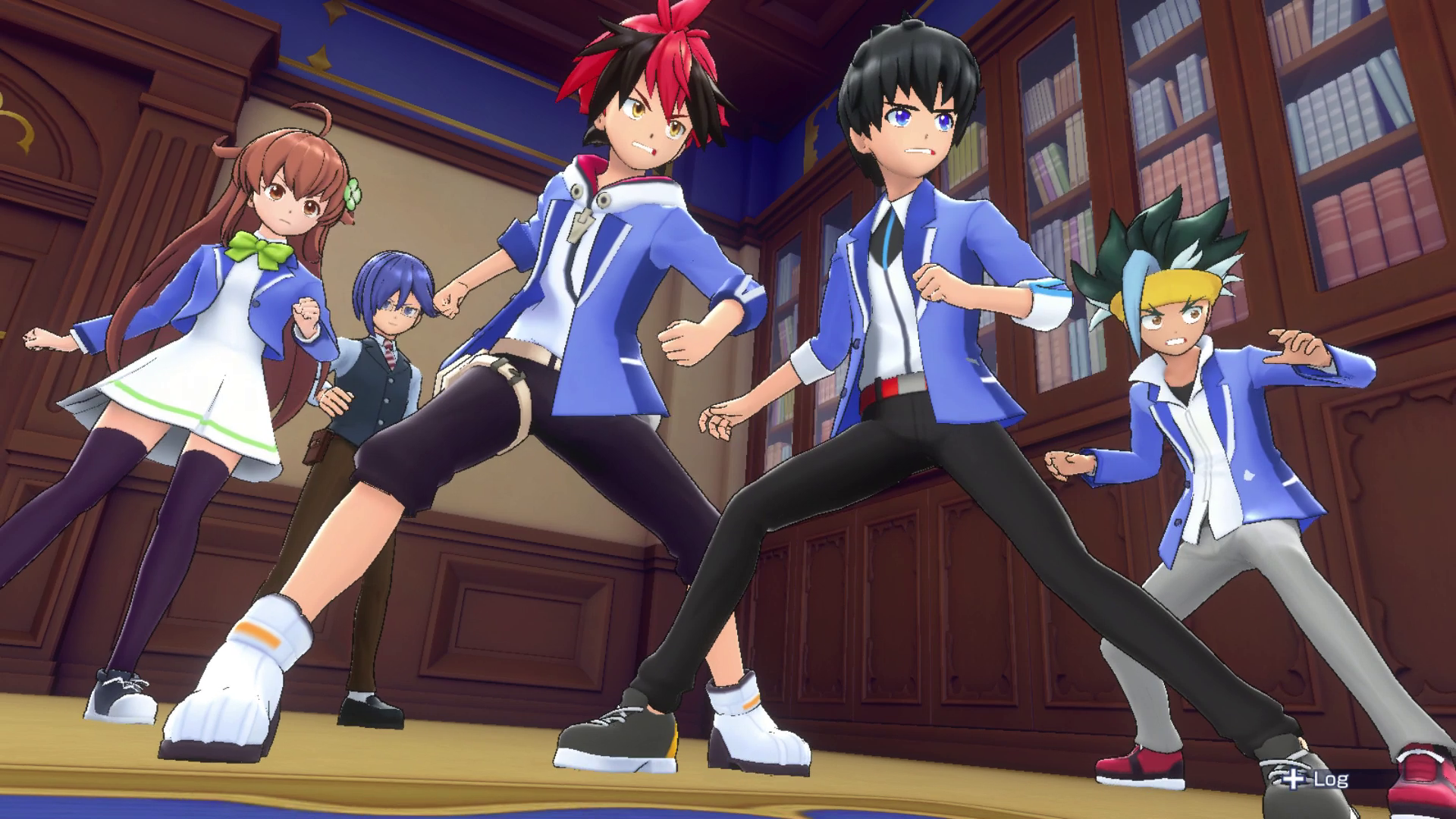 Upon playing for a few minutes, however, my mind immediately took me back to my childhood playing Yu-Gi-Oh GX Beginning of Destiny (or Yu-Gi-Oh GX Tag Force, they’re the same game on different systems). And at that moment, Shadowverse: Champion’s Battle had its claws stuck in me. At this point, I still have no clue if it will turn out good in the long run, but gosh darn if I’m not digging the look of the game so far. Wandering around a school campus and the immediate city area, challenging my fellow passersby to a match of Shadowverse, and winning the battle before taking their cards and money is bringing back those more innocent days of card games for me.

I know how much of a grind TCG games can be and I’m sure Shadowverse: Champion’s Battle will be no different. I’ve played both the Yu-Gi-Oh card game and many of the video games. I am more than aware of the true grind of getting the right cards and needing more money to feed the card economy. You want that rare card in the newest pack? Good luck. You’ll need to probably buy five boxes worth of cards and cry as you get your fiftieth copy of the most common card in the pack. 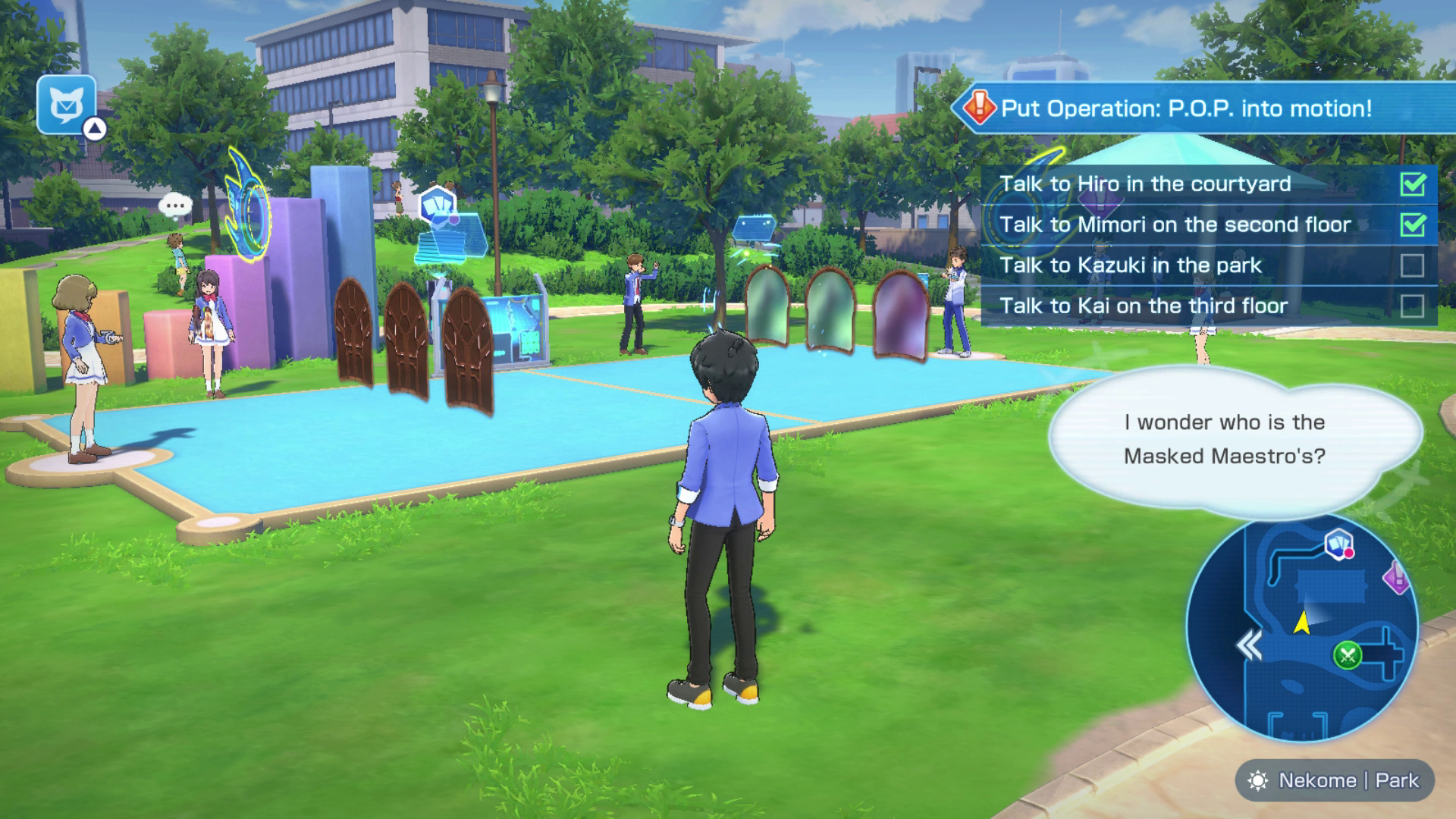 Looks-wise, Shadowverse: Champion’s Battle kind of reminds me of Digimon Cyber Sleuth (which is also on the Switch). Character models aren’t quite as sharp as I’d like, but they aren’t overly detrimental as-is. Performance is pretty good outside of the occasional pop-in during cutscenes.

Overall, I’m a lot more excited for the final game after this unexpected demo release. I’ve seen demos that have done a world of good for a game, and others that have marred their potential upon full release. Having a demo for this game makes a lot of sense, since Shadowverse is a mobile game first and foremost. And while I think most of the people purchasing it are going to be Shadowverse (or Cygames) fans in general, I do think that there are going to be a wave of people not familiar with the card game jumping into Shadowverse: Champion’s Battle.