Times are tough as many of us, burrowed into our living spaces for the foreseeable future, are looking for ways to divert our attention anywhere besides the current happenings of the world. For gamers, quarantines may be a dream come true, but could also make the prospect difficult due to financial constraints. Here is where this guide comes in – an article that, I hope, spirals out into its own series, aiming to provide insight into some of the best budget buys on the Switch today. While this specific article will primarily extend to just retro-inspired ATB/Turn-based/Action JRPGs, there is hope that others will spawn, covering additional facets of this multi-pronged genre.

Before we get started, let’s lay out some ground rules. First, this guide is obviously subjective, and there may be additional games that yourself (or others) deem viable additions to the list. The comments are open below – please let us know some of your favorite picks in this subcategory on Switch! Second, this guide will only cover games that retail around the $20USD and below range – you know, budgets and whatnot. Lastly, I will only be suggesting one of each game from popular franchises, like Dragon Quest and Final Fantasy. It would be easy to argue/suggest that one should play ALL the games available in these series, but given the budget-friendly objective of this guide, I will only be picking what I personally think is the best choice of the bunch.

Without further ado, let’s get into it: 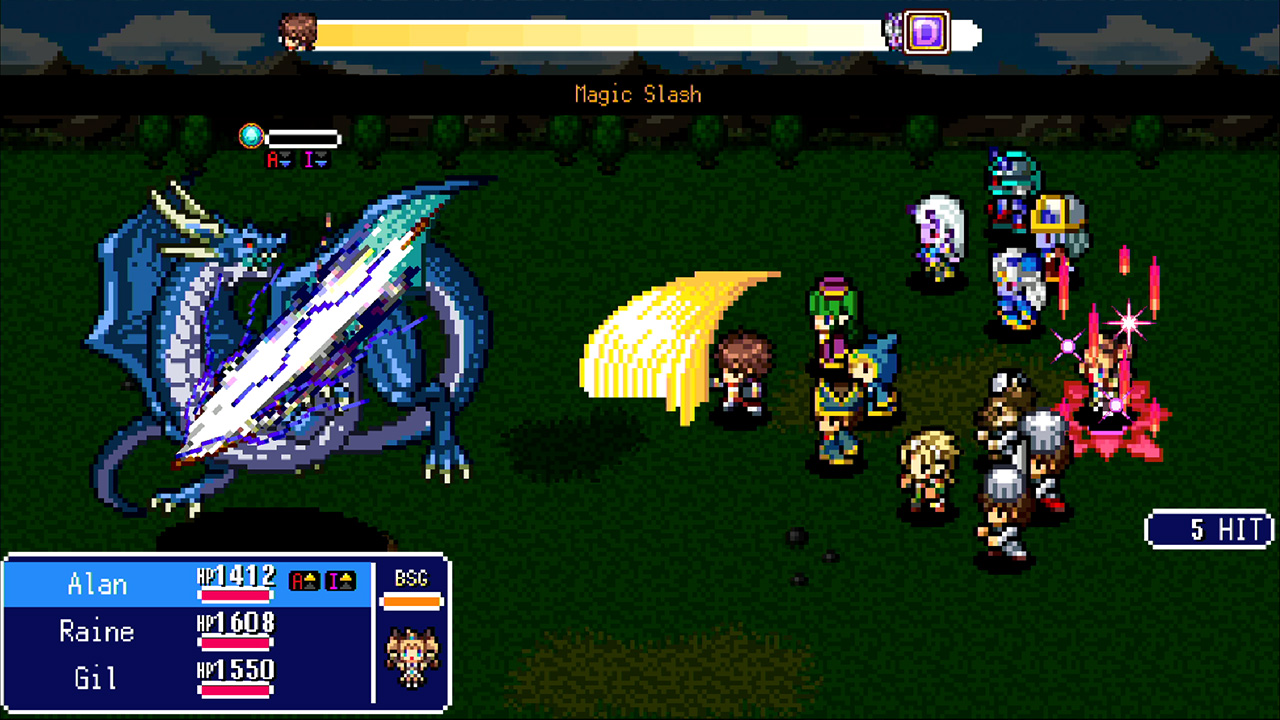 If you have frequented SwitchRPG over the past couple years, you’ll know that some of the staff – myself included – are fans of KEMCO RPGs… sometimes. Though they tend to “miss” more than they “hit,” they can be solid budget endeavors when the stars do align. Alvastia Chronicles is my favorite KEMCO RPG on Switch to date, featuring a narrative from a fresh perspective – a clinically mute protagonist – engaging modernized JRPG mechanics, all presented with an attractive coat of retro paint. Dragon Sinker, also a KEMCO product, is an honorable mention here, and could easily be interchanged with Alvastia depending on who you ask. 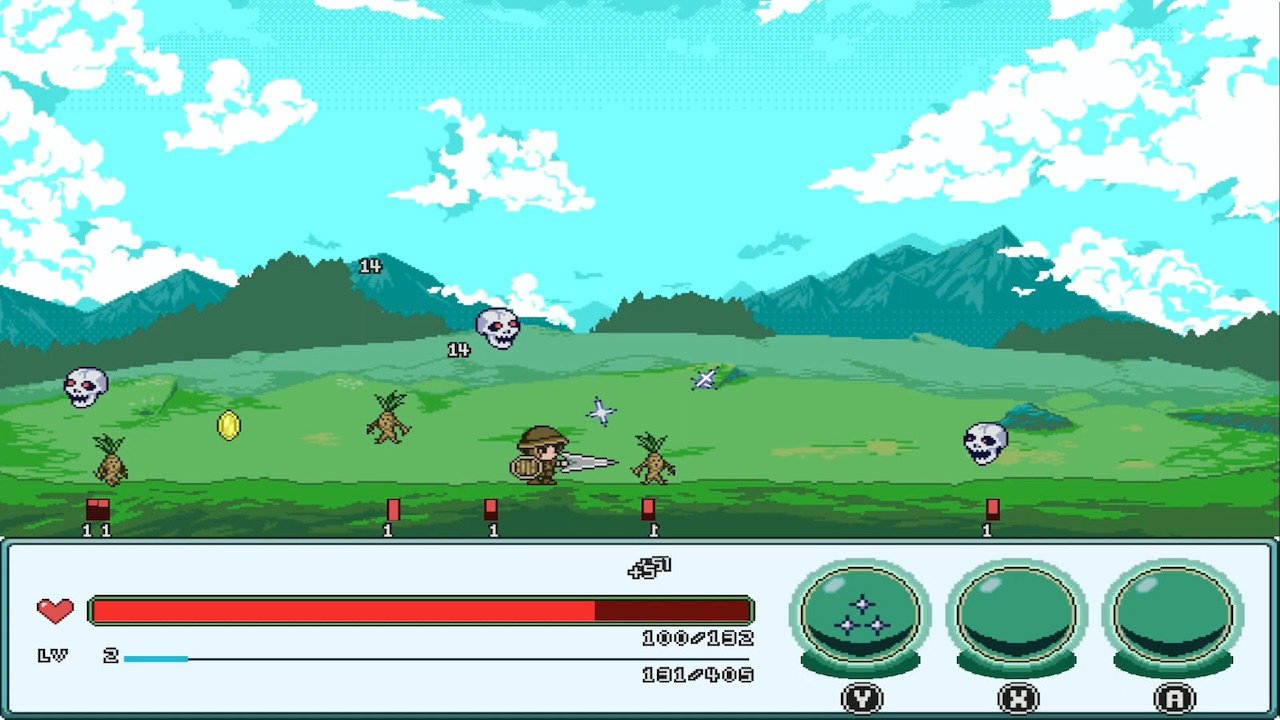 Perhaps the most unique title of the bunch, Artifact Adventure Gaiden DX is an open-world JRPG with meaningful choice/consequences all wrapped in Game Boy-like aesthetic. It also features an early Ys-like “bump” combat system, though here it is performed from a sidescrolling perspective rather than from the top-down. This one is a doomsday prepper’s dream come true, too, as the hero is tasked to make the best decisions – choices with real consequences – before a prophesied cataclysm destroys the world in the near future. The choice/consequence feature alone makes this title great for multiple playthroughs, making that low price of entry ever more enticing. 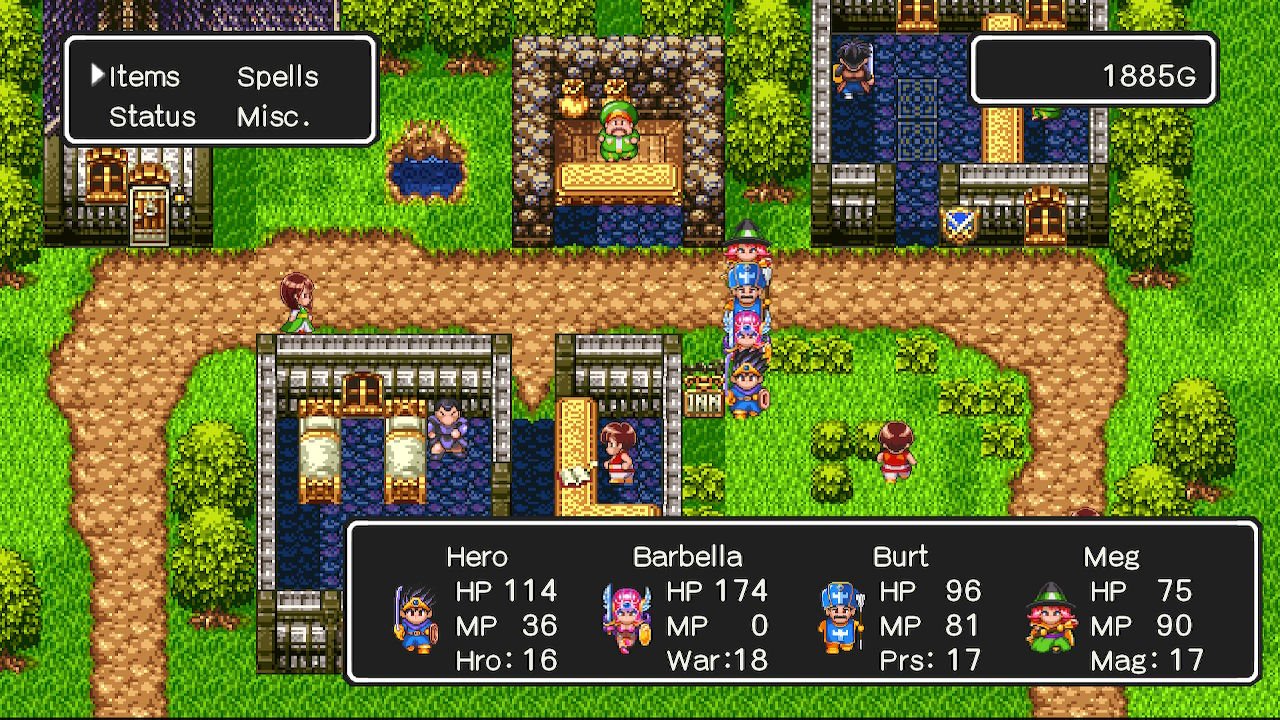 Easily the most ambitious, and for many, the most nostalgic, trip of the “Erdrick” trilogy, Dragon Quest III is a truly joyful ride from start to finish. Though this particular version is not the best package – to some, it is one of the worst – there is still incentive to pick it up for the on-the-go capabilities; more so if you can’t (or won’t) play it anywhere else. While mainline Dragon Quest games, including this one, have always revolved around high fantasy outings with run-of-the-mill JRPG mechanics, this version does include the mini-medal system that adds a bit more variety (and reward) for those that want to go ham with thorough exploration. The class system here can be fun, and the inclusion of the orchestrated soundtrack and improved(?) graphics may help take the “antiquated” edge off the presentation. While I still prefer Dragon Quest II to III – blasphemy, I know – there’s no denying that the endcap of the Erdrick trilogy packs the most bang for your buck. 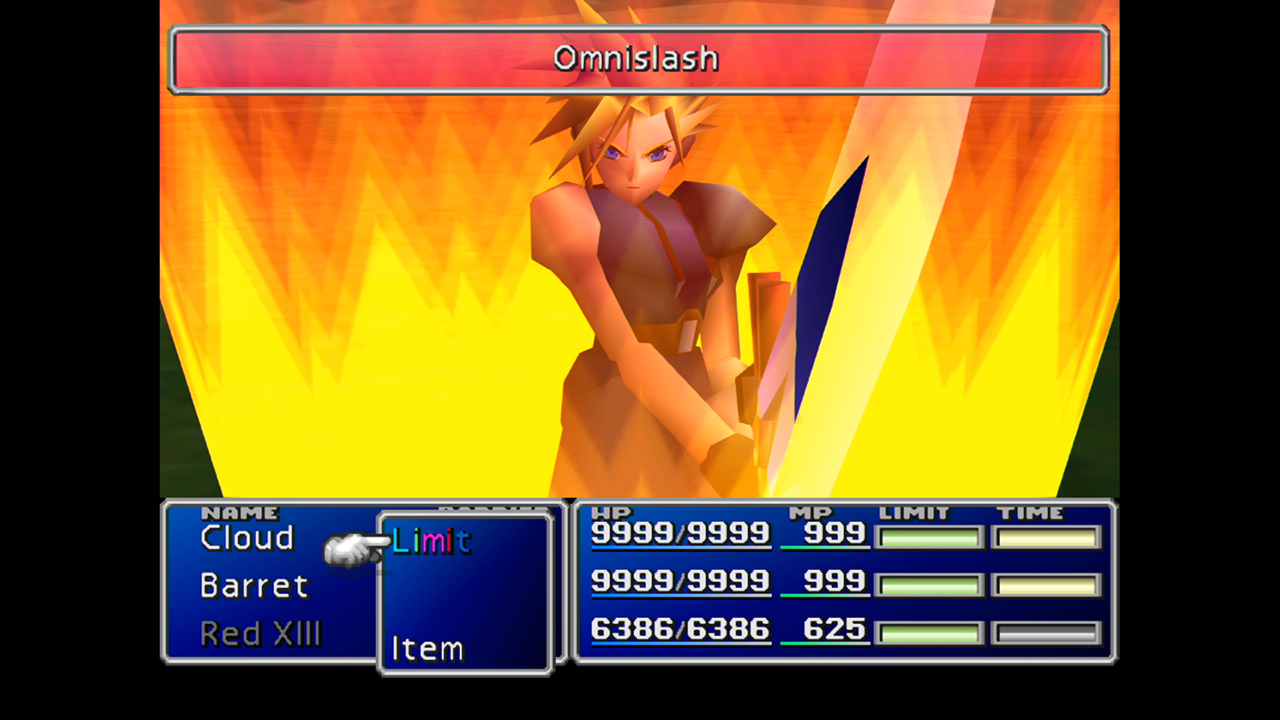 I’m prepared to take some flak for this one, but let me at least make my case. Although it is true that VII is my favorite of the PS1-era mainline games, I also feel that it is the most accessible to the average player. VIII and IX can easily go toe-to-toe with VII in many respects – hands down superior when in comes to graphics – but both entries feature components that may fail to captivate those who aren’t already awestruck with nostalgia. The anti-level / pro-stocking combat system in VIII can prove jarring, while the snail-paced battles in IX just haven’t aged well, and aren’t remedied by the built-in “speedup” feature that makes battles, sadly, too fast.

This is how and why VII shines so much in comparison – it’s the most basic of the bunch, with the Materia system adding just enough customization to keep things interesting. And fortunately, the speedup feature in VII is not too fast, allowing one to speed through more trivial encounters or story bits, should they so desire. Of course, playing VII now will also get veterans and newcomers alike ready for part one of the long-awaited remake, so there’s really nothing to lose here. 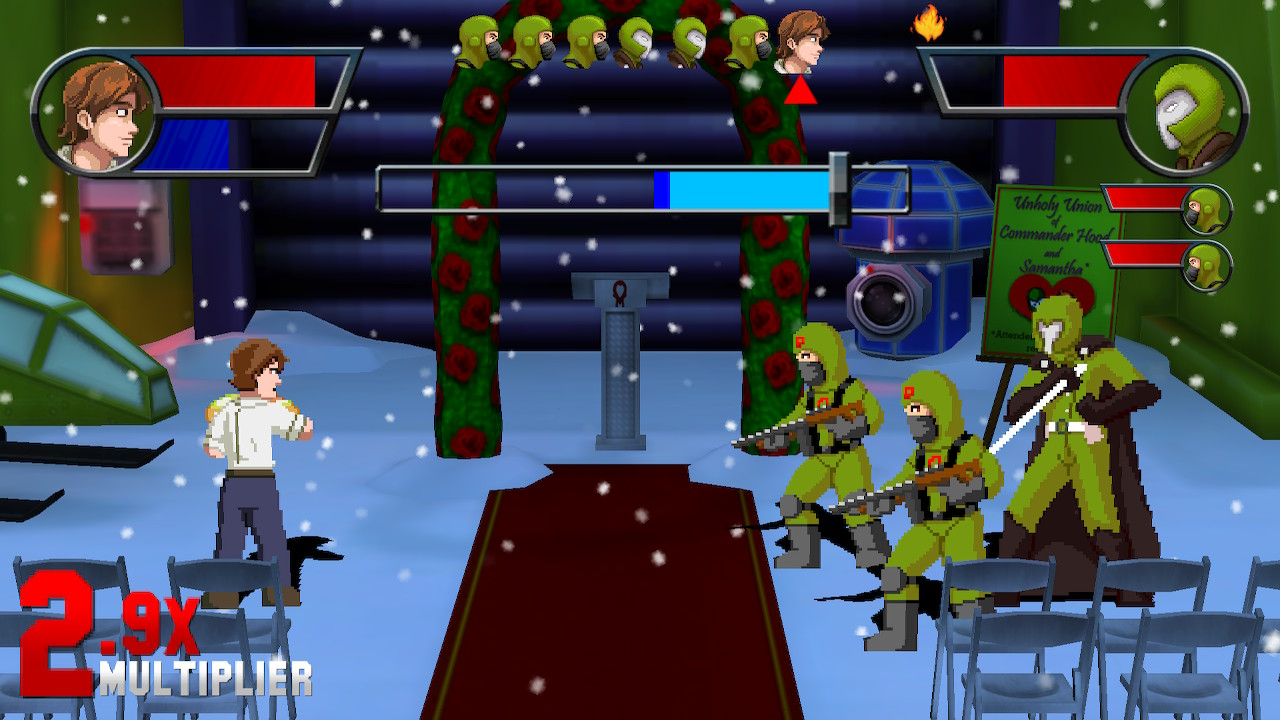 Saturday Morning RPG is undoubtedly the most lighthearted game on the list. Although this one is deeply infused with ’80s / early ’90s pop culture, anyone looking for a humorous script or an adventure film with themselves as the star will find something to appreciate here. Fans of Super Mario RPG / Paper Mario will immediately pick up on the combat system, as it relies on timed button presses to achieve the highest damage output. It is, no doubt, a cheese-filled affair, but can absolutely fill said cheese void if you need it. 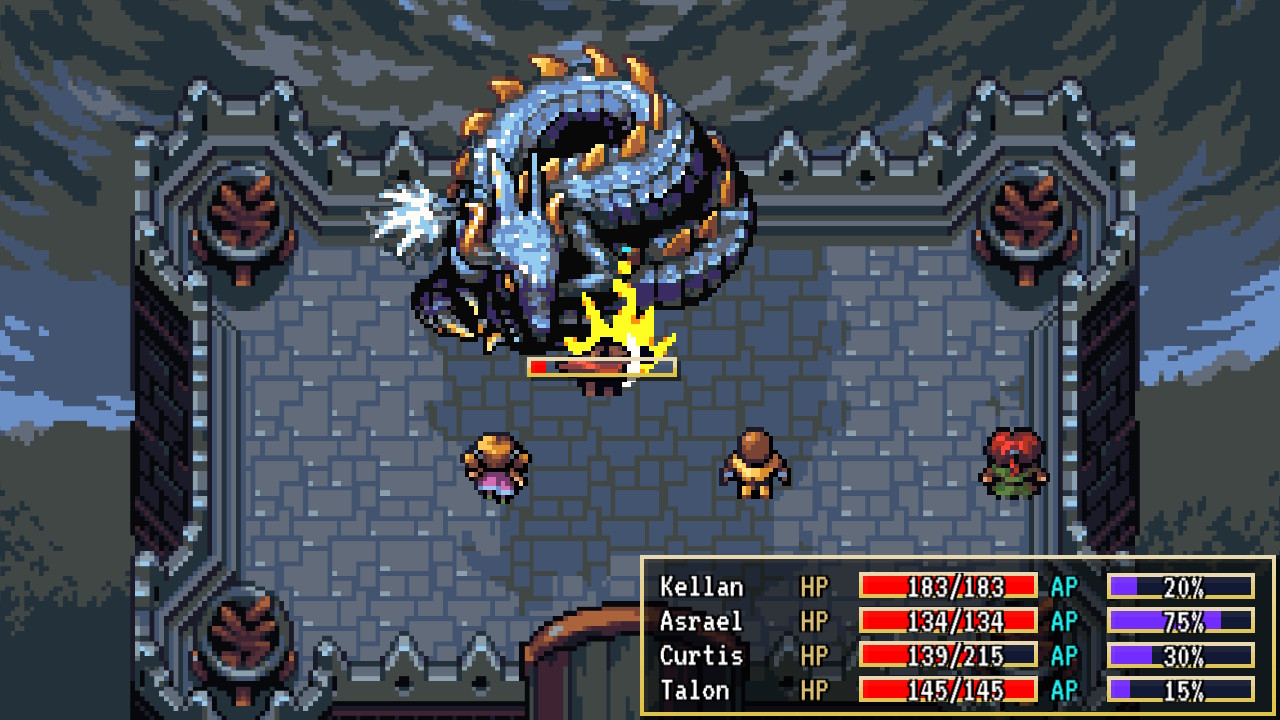 This throwback to the ” 16-bit heyday” of JRPGs was my most anticipated game of 2019, and I wasn’t disappointed upon its release. I like to think of it as a “Final Fantasy: Mystic Quest for adults.” Both games share many similarities, from static, visual enemies on maps, over-the-shoulder perspective in combat, this extends even to some melodic nods in this game’s nostalgia-driven soundtrack. There are differences, too: an increased difficulty and superior narrative are just two examples. Don’t let the Mystic Quest comparisons sway your vote in favor of avoiding it – for many, Mystic Quest isn’t a terrible game, and those that do still may find some pieces charming – Shadows of Adam is very much its own thing, despite the aforementioned correlations. 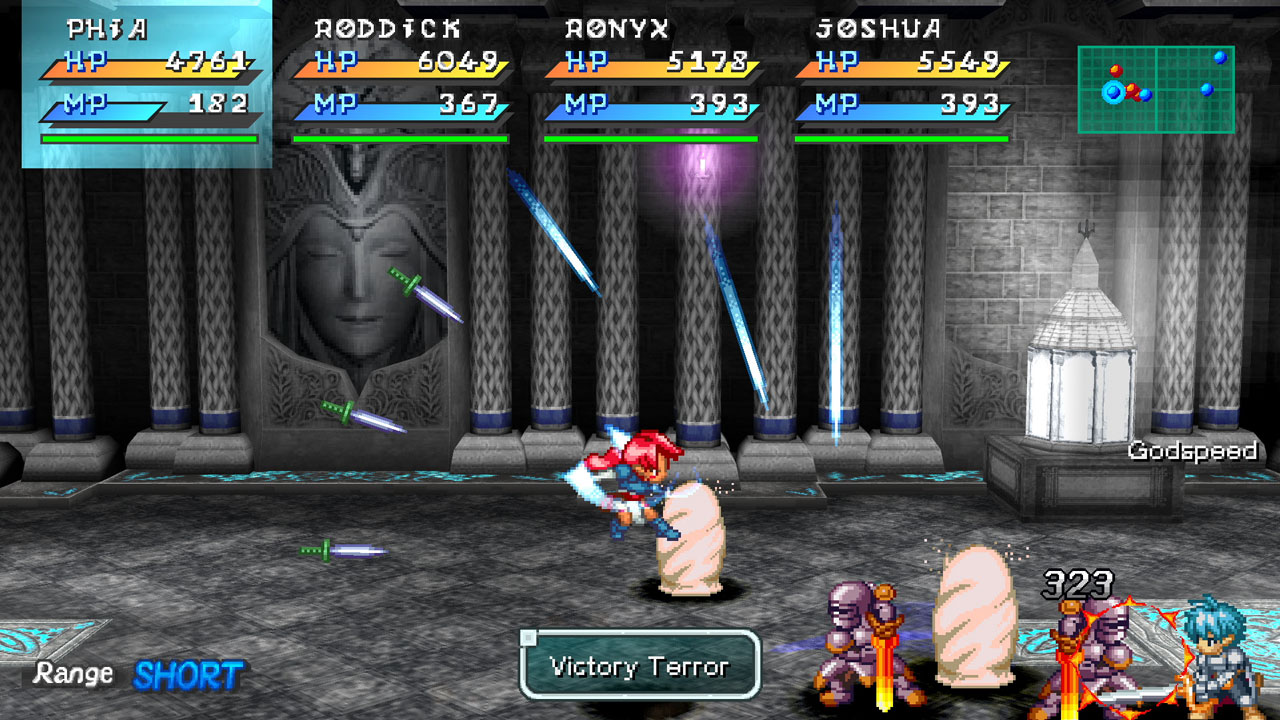 Arriving at the tail end of 2019, Star Ocean: First Departure R came out of nowhere and surprised a lot of people, including yours truly. This double-enhanced version of a 20 year old game ended up being one of my favorites of the year thanks to its stunning aesthetic, sweeping soundtrack, and interesting narrative with sci-fi undertones. It features an early Tales-like action combat system that may make it more entertaining for those looking for a retro adventure sans turn-based battles. For better or worse, it wears its retro design on its sleeve, but the enhancements made across multiple platforms make the Switch version incredibly appealing either way. 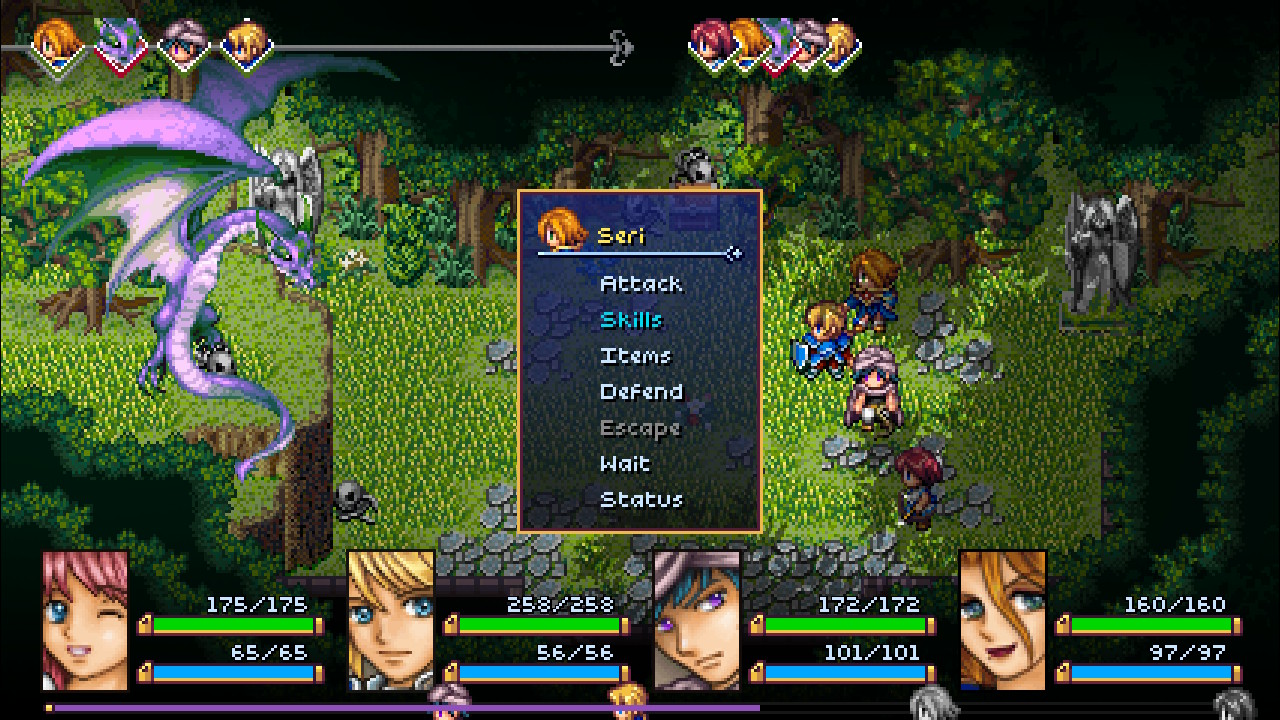 Ara Fell, like Shadows of Adam before it, was a title I’ve waited for with bated breath. Now that it is here, and I have completed it, it is one of my favorite retro-inspired Switch experiences to date. Ara Fell successfully combines the best parts of retro JRPGs with more modern sensibilities, like a dense, treasure-filled open world, fast travel hotspots, plenty of side quests, and a deep crafting system. This one has a ton of heart, and should definitely be on your list when considering your next purchase.

That’s it for this list! I hope that it helps you in your own decision making the next time you’re in the market for a budget retro JRPG on Switch. What did you think about my picks? What would you have changed/added to it? Let me know down below!

No Love for Cosmic Star Heroine?

Not a big fan of it personally, but that is definitely something that would appeal to most!

That’s cool. Thanks for the list. Will check out some of these games 😀

Wonderful, and please feel free to suggest any others you might be aware of in this price range!