Quality of Life in RPGs

As someone with a full-time job, finding the time to play Role-Playing Games is often a difficult and perilous endeavor. As one of the most time-consuming genres in the medium (at least, coming from a first playthrough perspective), you need to manage your time and objectives properly in order to maximize your precious gaming hours. Having played two major October releases back to back for review purposes, I’ve been feeling the pressure to complete games at a reasonable pace.

Fortunately, the first of these two titles was The Alliance Alive. A game that I was admittedly already familiar with, the FuRyu title also possesses a fairly transparent main narrative and some fine quality of life features, specifically the ability to speed up battle animations twice and even four times as fast at any point during combat.

Should a player wish to sit back and enjoy the battle animations of a boss or smash a number of enemies in order to boost their Talent Points, they have the option to slow down or speed up combat at their leisure. To contrast this, Little Town Hero is almost the complete opposite. Not only are attack animations unable to be sped-up or skipped, they’re one of the most tedious aspects of the game, occurring each time a turn begins or a move is engaged. Atop that, they’re hardly awe-inspiring, the only truly impressive sequences occurring when playable hero Axe actually deals damage to an opposing monster, which happens a lot less often than you would think. As mentioned in our preview, this turns an already-complex, choice-based combat scenario into a monstrous, 30 to 40 minute affair. 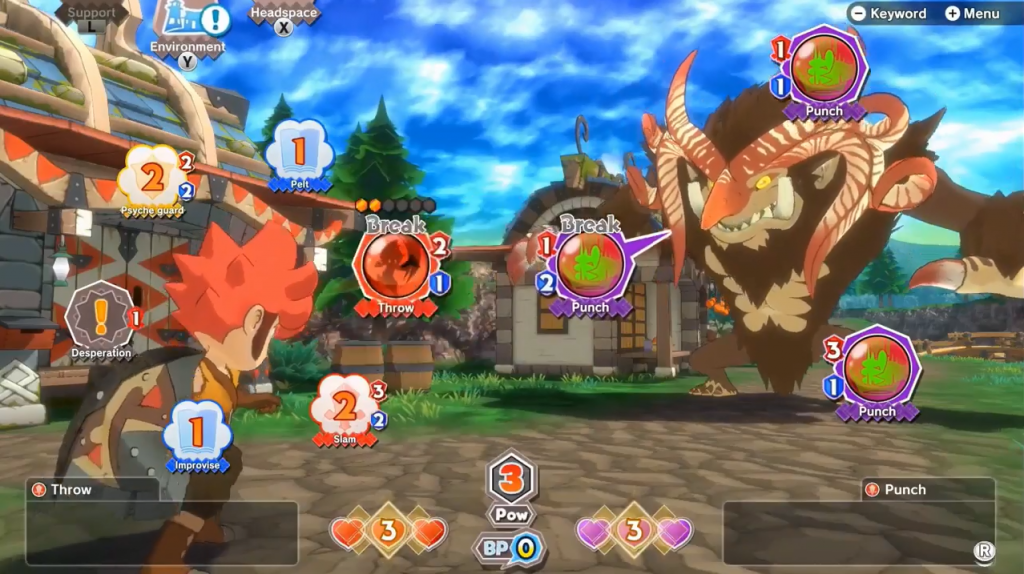 Although the catharsis of an RPG usually comes from the investment of a player, there are many titles that exist that strive to improve the player experience and reduce tedium via quality of life features. Whether it’s the farm features in Monster Hunter that allow the player to gather their most valuable crafting basics, or the ability to fast travel to any previously-discovered landmark in Xenoblade Chronicles, there are plenty of ways to ease the burden of a game’s complex systems.

Even Game Freak’s own Pokemon titles have begun incorporating EXP Shares to reduce grinding, though a long-standing feature has been the ability to turn off battle effects and animations- something Little Town Hero sorely needs. Looking back at FuRyu’s experimental predecessor to The Alliance Alive gives a great, optional feature to be celebrated: if you Streetpassed another 3DS owner in The Legend of Legacy, they would generate a rare item that would be gathered via your trade ships, which could either be equipped or sold for cash. Bravely Default’s Streetpass features were also neat, specifically passing high-level monsters around to other towns for a nice, meaty EXP or item reward.

I would argue, however, that not all quality of life improvements are created equal, and some baffling choices have been made along the past to creating a more perfect RPG experience. To give another example, Bravely Default’s grinding chain bonuses were wonderful incentives for a certain play style, but the option to increase or decrease the encounter rate seemed baffling for a game built so heavily on its combat system. Long story short- if you think your combat isn’t enjoyable enough and you should give players the option to get rid of it, maybe you need to do something about your combat, in general.

Xenoblade Chronicles 2 did it slightly better, adding a swath of player customization options very late into the game’s DLC offerings, and while it diminished the intensity of certain skirmishes, it never negated them in their entirety, meaning enemies would skill aggro and get in the player’s way. Pokemon once again gets a pass for having a game world that features clear-cut danger zones for enemy encounters, which is why caves can also be a nerve-wracking experience.

Whether it’s objective markers or the ability to alter difficulty options on the fly, quality of life comes in all shapes and sizes. Some lower the amount of interactivity required of the player, while others aspire to fine tune an experience for certain kinds of play styles. One element that feels a bit cheap, however, are dungeons or skirmishes that are specifically designed to increase resources, experience, and success that are locked out of a game via DLC.

In many RPGs, one of the more satisfying elements is finding that perfect grinding spot to maximize gains, or the freedom to exploit certain weapon and equipment combinations for your benefit. While a straightforward solution to these problems might feel like a cop out that is worth hiding behind a pay wall, why aren’t developers spending more time hiding secluded grinding spots and features into their game, rather than extracting them? Perhaps it’s simply the nature of the video game industry.

In any case, what are some of the best quality of life features you’ve encountered in a game? Do you utilize these options at all? Did you know that the Stylish System in Paper Mario: The Thousand Year Door is an amazing quality of life option? Feel free to share your thoughts in the comment section below!

At first I did not like QOL options. I wanted to see the animations, etc. Then when grinding became such a common staple in RPGs it became a trudge to grind. My favorite mobile game is DC Legends. They had a QOL speed-up in combat which made it much better to grind and then they even added a 3x as fast plus removal of special move animations. That made me realize how really useful they can be. After the first few battles I enable any QOL option there is.

I agree with this. Though I think the ultimate solution is to build a battle system around constant engagement, I really feel that speed-up options are a must-have in any other case.

I understand that some new ports of old RPGs offer 3x speed travel and whatnot- that these features need to be added to classics in order to make them bearable for the modern era is unfortunate, but I think that’s also a sign that these games were a bit unbearable in the first place. They were the best we had at the time, and they deserve to be celebrated, it’s just too bad that the developers feel the need to smooth over these rough patches in order to make them accessible. It highlights them in attempting to make them more… Read more »