PAX in Review: RPGs to Look Out For!

Last weekend, some of our staff headed out to PAX East and had the opportunity to check out some new games from independent publishers. Fortunately, there was a plethora of role-playing announcements and demos, and while we didn’t get a chance to capture footage for all of these titles, we do have some hands-on impressions of games to look out for. Here’s a peek at a number of new RPGs headed to Switch in the next year and beyond: 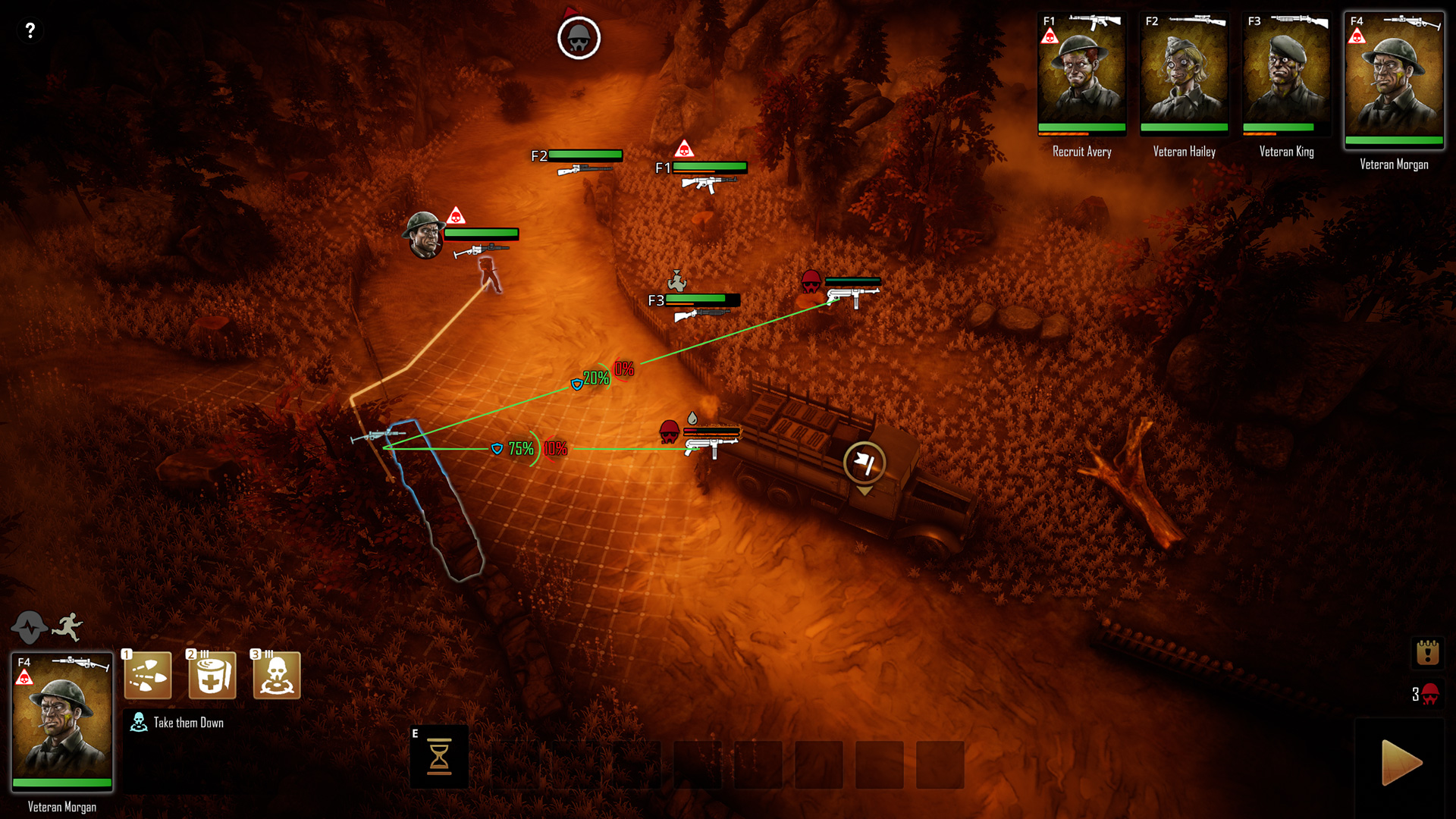 This tactics/strategy game has players fighting their way through Eastern Europe in an alternate-history World War II scenario. While the location and genre might seem like a tired retread, the gameplay systems are rather unique: you’ll give commands to you units that play out over eight-second real-time turns, with maps having far freer movement than a grid-based system. Depending on choices you make prior to and following combat scenarios, your soldiers can suffer damage to their morale, which may result in a variety of different traits and outcomes. Your main squad will earn new abilities as the story progresses, but they’ll face permanent death should they fall in combat, with a fully wiped squad resulting in a game over and campaign reset. If you’re a fan of ranged tactics titles, Broken Lines offers enough new and neat features to help it stand out, especially on a system like the Nintendo Switch.

More of an action adventure than a true RPG, Raji was shown alongside a number of games from publisher Super. However, upon viewing a demo of the game’s systems and structure, it’s clear that this title from developer Nodding Head Games has a whole lot of love and inspiration packed into it. A combination of an isometric/zoomed out perspective, action-combat gameplay, and Prince of Persia-like acrobatics both within and outside of combat, Raji looks gorgeous and offers a precise, yet satisfying gameplay experience. What’s most impressive, however, are the cultural inspirations of the title, which implement native Indian cultural and art elements in a way that results in a game that offers representation and a sense of individuality. Though Raji doesn’t have a release date yet, Nodding Head has promised a smooth 60FPS framerate Switch later this year. 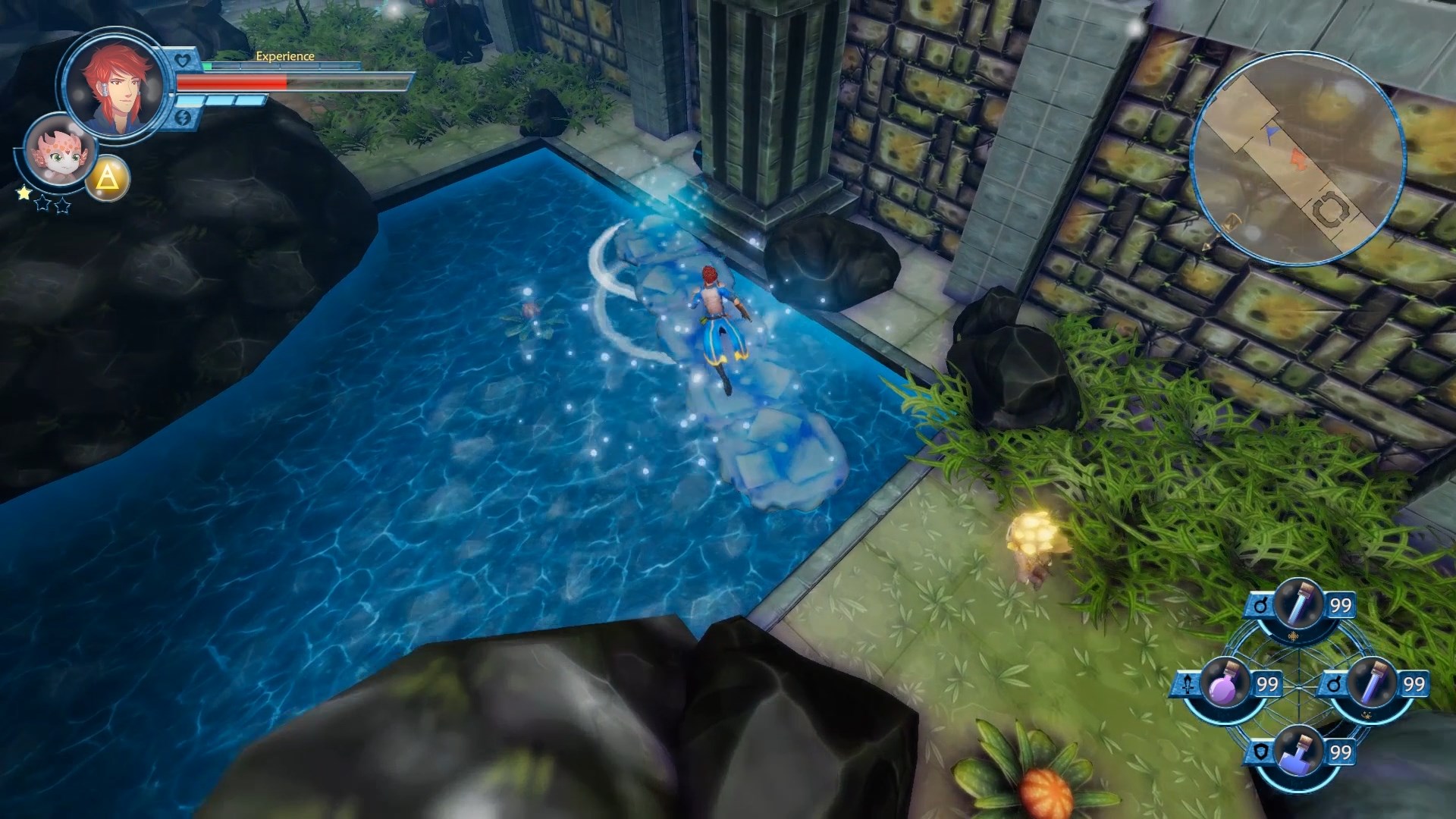 Breath of the Wild offered the Nintendo Switch one of its first systemic titles- a game where the environment reacts to a variety of other elements and mechanics. While Alchemist Adventure might not feature a sprawling open world, opting instead for a Metroidvania-like expanding environment (which sounds just as good!), its elemental systems are just as complex and impactful. You’ll need to combine materials in a myriad of ways in order to alter not only the kinds of potions you lob at foes, but the sorts of elemental attributes you imbue upon your sword. Additionally, you’ll be able to use these to affect the environment, as fire will spread from target to target and certain types of features, electricity will jump across water (and even shock you, if you’re standing ankle-deep yourself!), and all sorts of devices from across this alchemy-focused fantasy world will spring to life. You’ll even be able to raise a fairy-like assistant to gather materials and use certain attacks in tandem with your playable character. Not only that, but the narrative proves similarly engaging, with an alchemic society under siege from a mysterious faction of science-centered, mech-piloting enemy faction. This title was one of my personal favorites from PAX, and I’ll definitely be adding it to my list as I look forward to its release on the Switch in the future.

We talk a big game about role-playing in games. Many titles nowadays implement narrative divergence and/or stat manipulation, but these are often tacked-on and non-essential to the gameplay experience. Imagine my surprise when hearing how the choices in combat style result in drastically different narrative pathways and choices in Hindsight: 20/20. When speaking with the game’s creative director, Hemanshu Chhabr, the granular nature of the game’s morality system felt overwhelming- when playing out scenarios, enemies will react differently and utilize certain tactics based on the kinds of choices you make with the game’s dual weapons- a flame sword for slaying, and a shock baton for pacifying. If you take too long to defeat a boss, you may lose the chance to save a friend- even if you do end up taking out said boss, you might fail in a negotiation section. The game’s five endings rely heavily on your choices as a combatant, which might result in a town of natives hunting you down due to your bloodthirsty behavior, or a well-populated and benevolent town that was built upon questionable decisions. There’s so much potential present in Hindsight: 20/20, and its unique character and aesthetic design only distinguishes it further from a number of other titles on the Nintendo Switch. 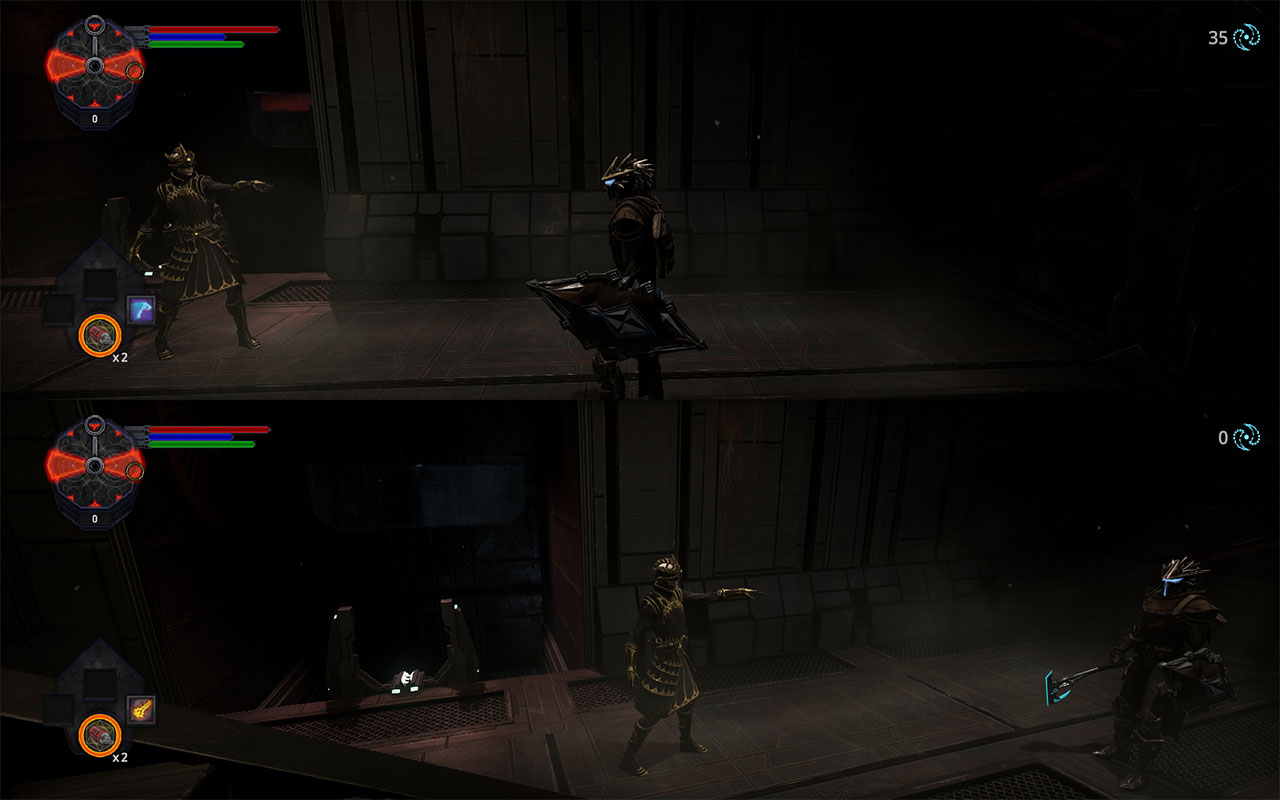 I remember mild curiosity upon first hearing about Hellpoint around its initial announcement- while cosmic horror is most definitely my thing, I felt that the application of soulslike design was something that wouldn’t find much success on the Nintendo Switch. But, I’ll be honest when I say that the co-op gameplay inherent to the subgenre’s design has been somewhat lacking in titles like Salt and Sanctuary and Ashen, whose systems are overly reliant on a very patient partner. After speaking with representatives at the TinyBuild booth, it greatly excites me to hear that a summoning and invasion system will be present in Hellpoint right at release, and after seeing more of the game’s unique weapons, skills, and aesthetics, I’m most certainly excited about this title’s arrival on Switch next month. 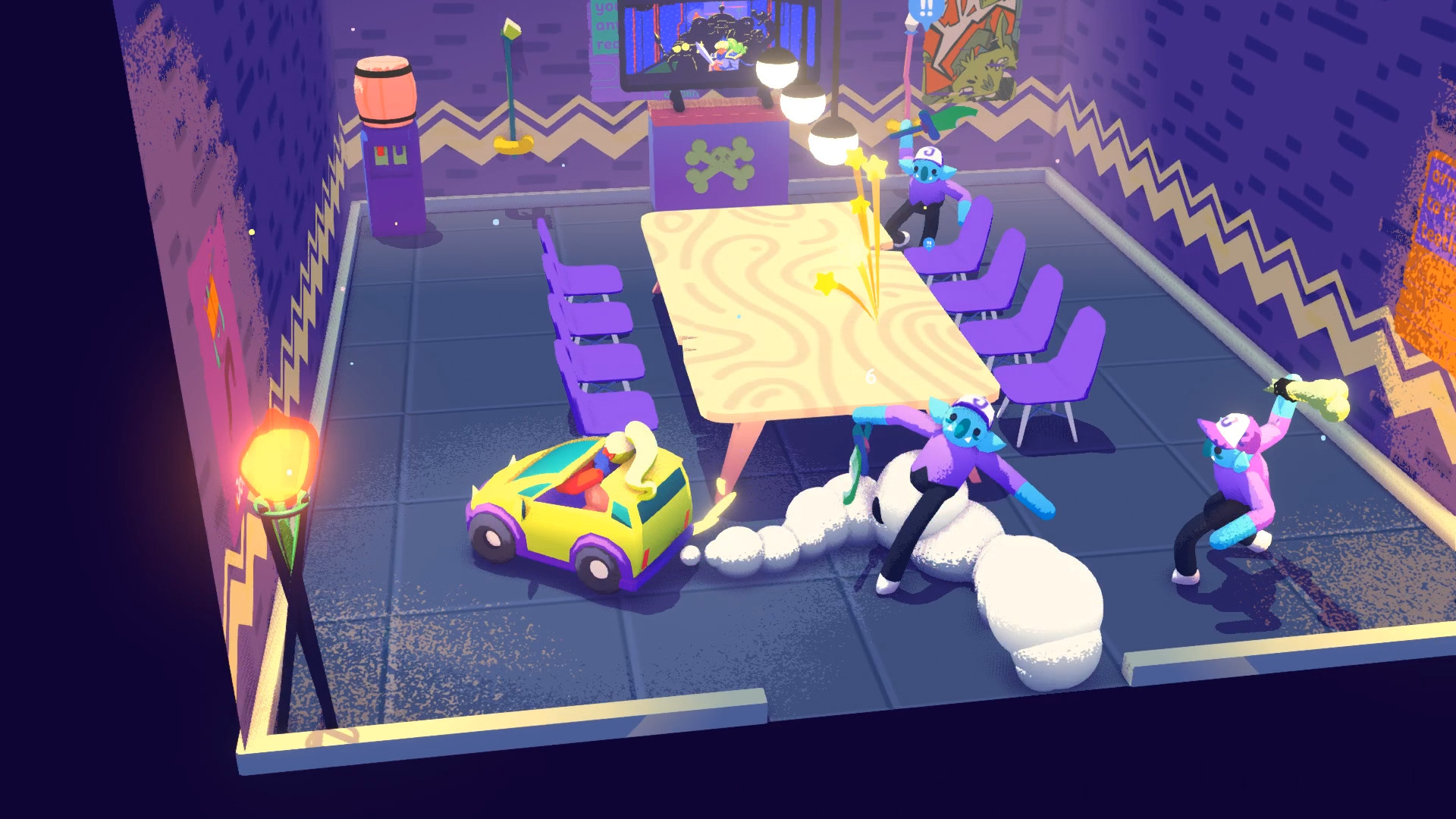 I love the chaotic energy of developer Aggro Crab’s twitter handle, but what’s even better is the way that energy translates into their current project: Going Under is a roguelike about internships, where you’ll need to use just about every object at your disposal in order to dispose of all the underlings mucking about your employer’s basement. Dripping with style and charm, the game’s bizarre art style is just ridiculous enough to sell the madcap silliness of picking up stools, coffee cups, ping pong paddles, and brooms in order to bash your way to victory. And there’s even a table made of bacon! Although the demo was short, the game’s focus on constant weapon-swapping was a refreshing change of pace in comparison with many roguelikes that focus on specific loadouts per run, and the character art and dialogue were truly something to behold. Here’s hoping this one comes to Switch sooner rather than later! 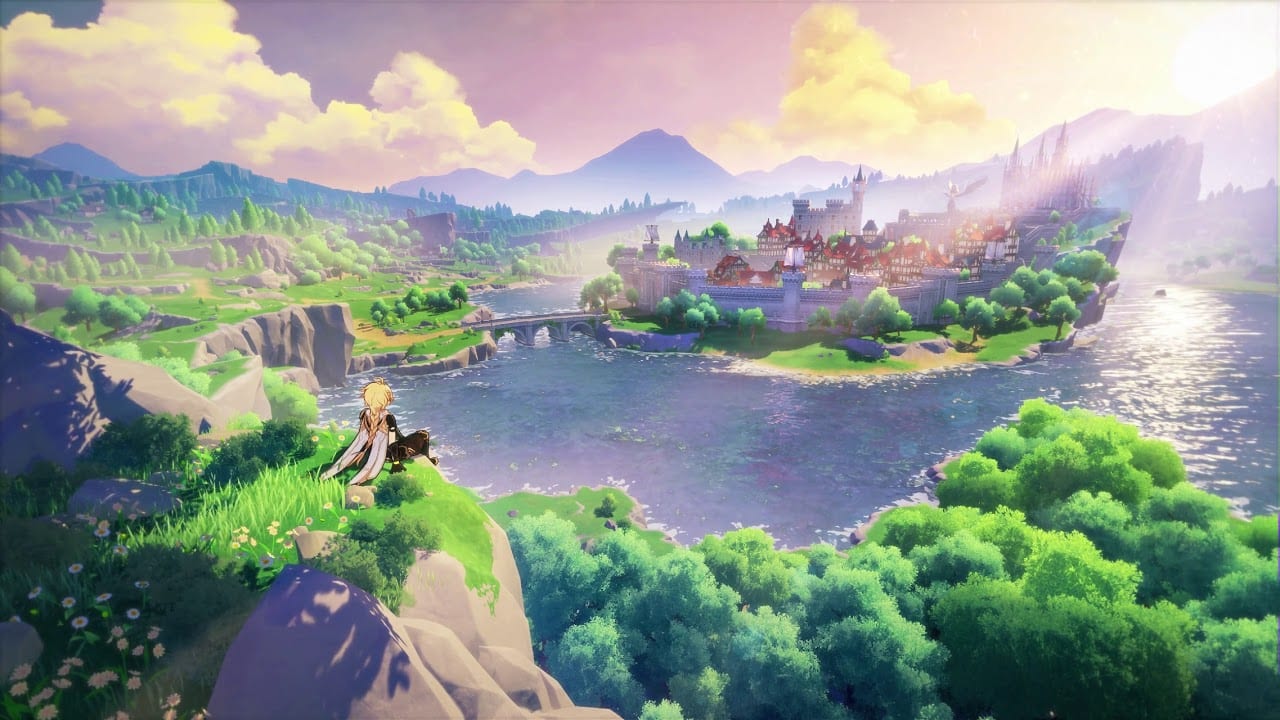 Where the hell did Genshin Impact come from? Well, developer miHoYo is the obvious answer. But if there was one title that really blew me away at PAX East this year, it was this massive, open-world action RPG that evoked feelings of Breath of the Wild and the Tales of series. Gorgeous in visuals, varied in terrain and environment, and exciting due to its elemental combat, Genshin Impact was running on a number of PS4 and PC setups on the show floor, and while I only played about fifteen minutes of the title, it left me excited and begging for more. The experience wasn’t perfect- characters felt a bit too slippery during precise movement, sprinting needs an easier toggle format, and maybe I just need to play on something other than a PS4 controller, but the beauty of this world and the inclusion of actual civilization (something lacking in Breath of the Wild) were more than enough to leave me wanting more. Here’s hoping we learn more about the Switch port in the near future, as this odd experiment is apparently going to be a free-to-play experience that oozes unheard of production value.

These are just some of the titles we checked out at PAX East, but there are many others we captured footage and interviews for over on our YouTube channel. What are some of the games you spotted at PAX East? Which games look most appealing to you? Let us know in the comments below!