The knight is arguably one of the most iconic of character tropes, with its origins dating back to over a millennia ago. As such, it is commonly seen in all sorts of media and has been the catalyst for fantastical aspirations of many a child. Knights are often portrayed as strong authority figures that demand respect by default, and are fiercely loyal to their country. That statement alone could describe the vast majority of knights you’ll come across in all forms of content, thus it can be difficult for many of them to leave a lasting impression.

A recent example of my own comes from Tales of Vesperia – a game which I highly praised – that too falls victim to the tired knight trope in the form of Flynn. Ever the do-gooder that innately captures the respect of everyone – except for Yuri maybe – there’s nothing really wrong with his portrayal of the knight, but nothing really outstanding either. Though his struggles with the desire to change his empire from within, he is still respected by almost everyone just because he is a knight.

Simply put, it is too easy for a character to come across as one-note when your archetype is as old as time itself. It is for that reason that I simply adore Adelbert Steiner in Final Fantasy IX because his adaptation – and garnered reception – of the knight goes against the grain in many ways. Now, on the surface he appears to be more of the same, battle-hardened and proud of the patriotism that, oftentimes, comes as detrimental to himself and others. Where he differs from most is how he is perceived by his peers and the public, and how his die-hard loyalty often gets in the way of what is best for the situation. 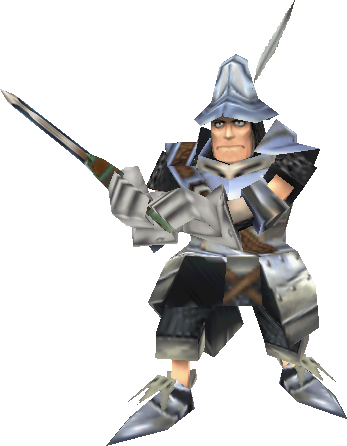 Whereas the mere presence of a knight walking amongst a crowd can be enough to excite the children and swoon admirers, Steiner is instead called out for his rusty armor. When his authority is challenged, giving him an excuse to proclaim his role as leader of the “esteemed” Knights of Pluto, most people respond in confusion rather than fond recognition. Even the military hierarchy of Alexandria, Steiner’s motherland, sees the whole Knights of Pluto faction as the laughingstock or, at the very least, the second/third string of the militia.

Once recruited into the party, Steiner in many ways works against the party’s best interest for a large chunk of the journey, but he does so because he thinks it is what is best for Garnet DESPITE her repeated attempts to convince him otherwise. It isn’t until much later in the game that Steiner lets down his guard – if only by a bit – earning much more respect from the team than he ever earned back in his more arrogant days.

The borderline red-headed stepchild approach is just what the arguably tired trope needed too, as Steiner is allowed to maintain key features of the knight – chivalry – while having it delivered in a more tasteful manner. And that is why I would love to see more games apply this kind of approach to the knight. Any situation involving a knight is already going to feel a bit stiff by nature, so why not have a little fun with it?

I would like to see more knights in rpgs, but I would like to see them in a more positive light. A knight that is strong but also wise, or lawbiding and righteous but understands poverty and hardship. An aspiringly good person who isn’t one dimensional.

I’d argue that Steiner fits that bill. He’s kind of a jerk to those outside of his circle in the beginning but ends up opening up quite a bit after the party’s many hardships along the way.

I wonder if it isn’t a reflection of gameplay.

Knights/Warriors/Fighters have typically had terrible gameplay until recently. “Attack” was pretty much their only option during battle. Did boring gameplay spill over into boring characterization?

I think the Knights in particular will always struggle with this to an extent. Just look at an MMORPG and the most unpopular role will be the tank, which is basically what a Knight would be considered. They are hardly ever the flashy type, so I think they are likely to go unnoticed by many. Olberic does it well in Octopath and, of course, Steiner. I’m sure there are other examples too, but those immediately come to mind.

The tank is the most unpopular role in an MMO because it is a thankless job! It is more miserable than boring: 1) You have to know your way around the entire instance. The party is following you and they don’t need to know the map. 2) You have to know each boss fight in advance. The DPS and healer can usually wing it if it is not endgame content. But it is a guaranteed wipe if the tank does not know the mechanics and dies to avoidable damage or lets the party get annihilated. 3) You set the pace… Read more »

True that on being thankless!