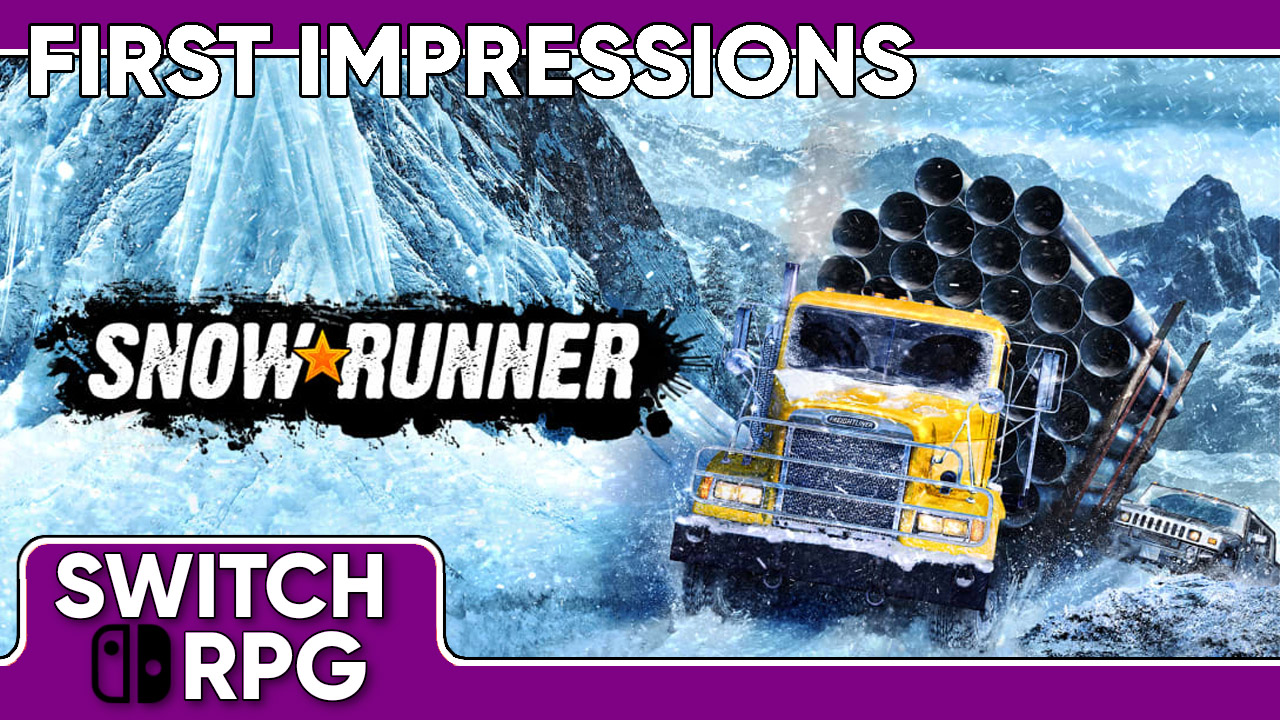 Have you ever dreamt of operating a massive off-road utility truck in the frozen backwoods of Alaska, plodding through snow, mud, rivers, and dangerous mountainside roads as you haul a trailer full of bricks, metal beams, or concrete slabs to your contracted destinations? Sounds exciting, doesn’t it?

If you’re like me, someone who never played Saber Interactive’s MudRunner and only discovered their follow-up, SnowRunner, when it spun its tires on to the Switch this past May, the thought may have never occurred to you. Or maybe it didn’t stick beyond an initial sense of bewilderment over the apparent randomness of the proposition.

But what if I told you that there was a video game, an off-road driving simulator, that combines the aforementioned premise with some of the best elements found in the RPG genre?!

Or perhaps it’s the other way around?

Yes! Imagine The Witcher III but instead of a cinematic masterpiece formed around well-written storytelling, and rather than walking or riding horseback, or fighting, or collecting items to craft alchemical decoctions, or weapons, or equipment…

Okay, scratch all that. Don’t imagine The Witcher III, though, while I’m on the subject, it’s worth mentioning that Saber Interactive also handled the Switch port of CD Projekt Red’s chef-d’oeuvre, and it shows, meaning: the enormous size of the environments and the successful preservation of detailed features across variegated landscapes makes me think it’s one of those games that has no business running this well on the Switch. Yes, as with every Switch port, there are visual downgrades, and SnowRunner in particular has a lot of ‘pop-in.’ Still, even at this late date in the Switch’s lifespan, that games of this magnitude are playable on a handheld console continues to wow me. And regardless of how you feel about the Switch version of The Witcher III, I’m inclined to think that the crew over at Saber Interactive are wizards of the craft, SnowRunner being no exception. 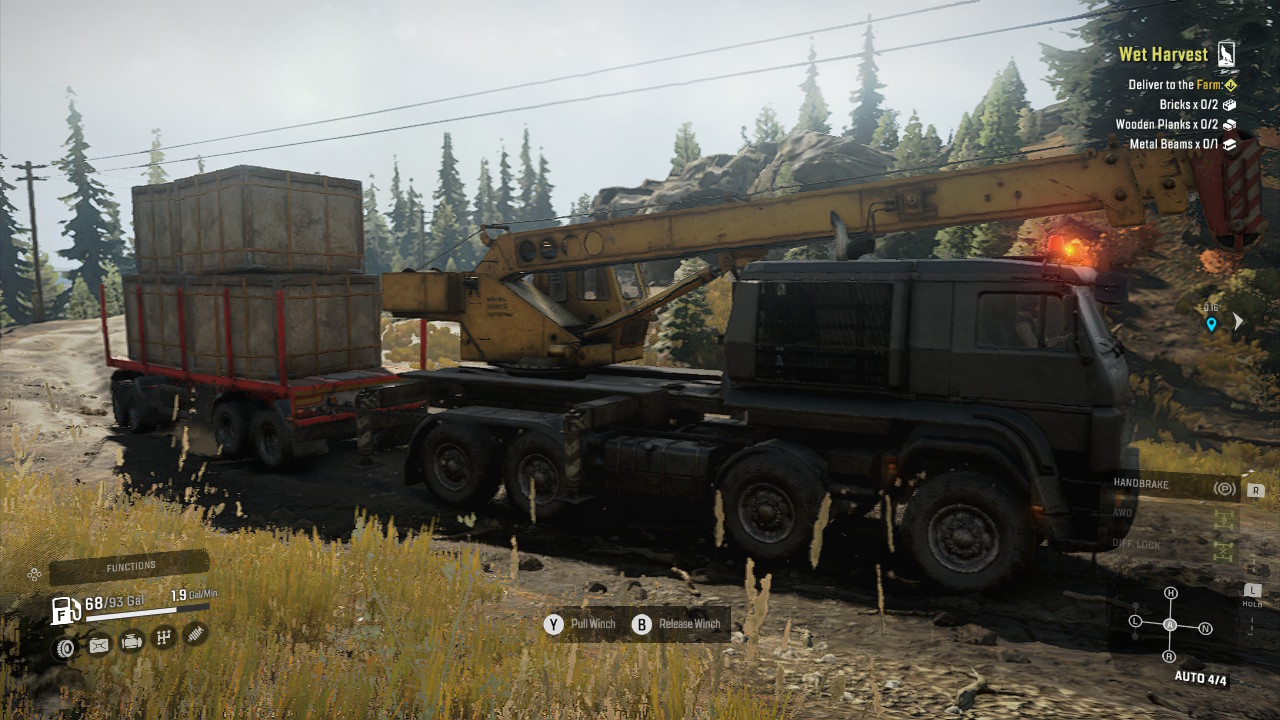 Anyways, imagine: a sprawling, beautiful, sandbox world, set in either Alaska, Russia, or Michigan (hey mom and dad!), where you’re given full range to explore at leisure—within the confines of one of the game’s 50+ officially licensed vehicles, obviously—and acquire an assortment of jobs from the locals who are seeking to rebuild their communities following recently tumultuous weather conditions. That’s basically the gist of SnowRunner. There’s not much of a story at this point other than you being a guy (sorry, ladies) with a garage and an ambitious plan to drive around town day and night—and without a wink of shuteye—collecting missions and raking in the cash that accompanies their fulfilment.

Sure, it might seem that a game centered around treacherous trucking assignments, and one where your vehicle often moves at a snail’s pace due to the terrain, could get monotonous. In the two dozen hours that I’ve put into SnowRunner thus far, I admit, it sometimes does. Yet that’s also where the RPG-side of things enters into the equation and keeps it interesting. Like many a great RPG, the gameplay loop derives its addictiveness from the ability to gain EXP, levels, unlock new vehicles, and many more upgrades. Aside from offering layers of depth to uncover in the mechanics that underlie each transportation type and their multiple enhancements as you progress further in your quest to become the world’s ultimate gentleman, it’s also just innately enjoyable to drive around with your different trucks, from Hummers to heavy-duty Caterpillars, and soak in the arresting scenery of each of the game’s diverse locations.

Nevertheless, as mentioned, if you’re looking to satisfy a need for speed, take heed: you often move very slowly in SnowRunner, or worse, not at all, as your tires quickly lose all traction in waist-deep mud, sludge, or snow. This is where I discovered, for the first time in my adult life, the all-purpose, life-saving utility of the winch. Who knew such a device could be so handy? In my first ten hours or so, when my garage was limited to two very substandard vehicles that you receive near the outset, I found myself getting stuck in the mire of Black River, Michigan’s flooded countrysides… a lot. Like every few minutes, to the point that I was finding the ordeal quite tedious and frustrating. Fortunately, where there was a tree or log nearby, the winch was my saving grace, most of the time. Since those earlier moments I’ve earned enough spare change to purchase a decent tank of a ride, and it’s been mostly smooth sailing… er, trucking. Mostly. It’s unquestionably been much more fun. 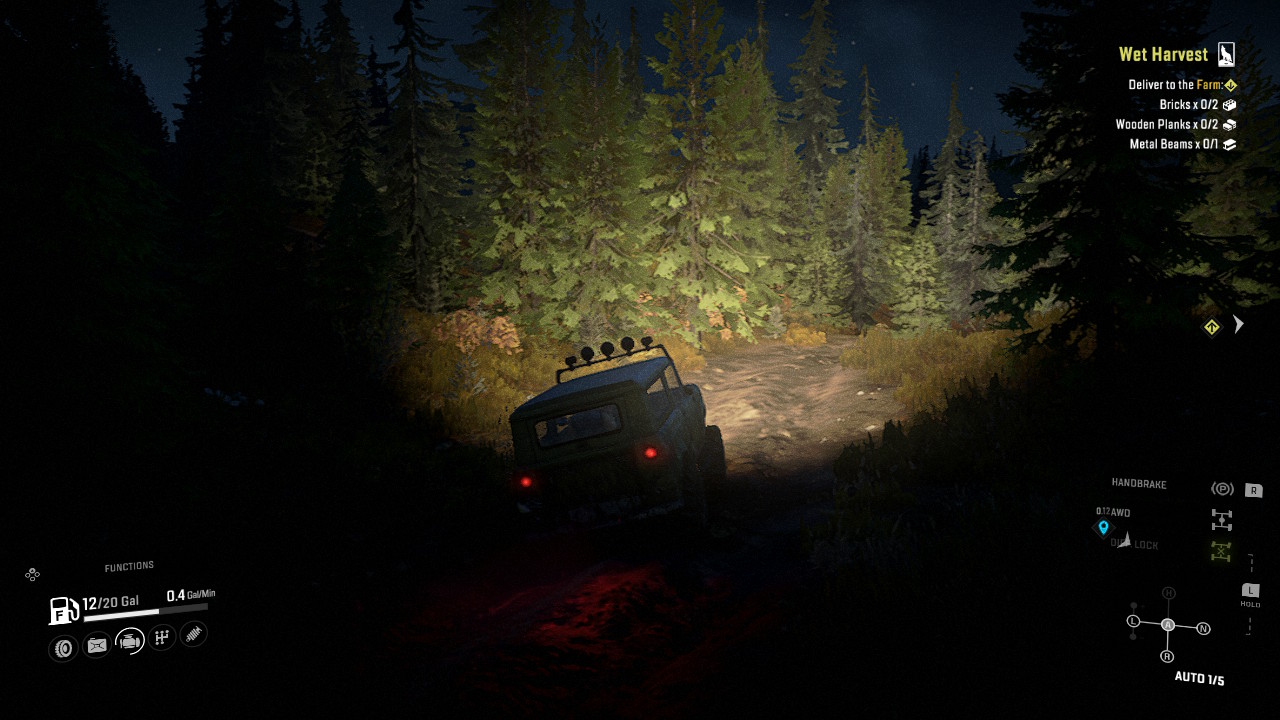 One thing that SnowRunner gets exceptionally right is its imitation of real-life mud… physics? I don’t know if that’s what you’d call it, but when you’re traversing the thick of a boggy landscape or rolling over patches of slush and soil, it feels incredibly authentic, the developers capturing the weightiness of the vehicles and the effects of the situations in which you find yourself with flawless accuracy.

A few minor criticisms of SnowRunner that I have at this point, apart from my slow start and some vagueness regarding what to do next or even how to complete certain missions, are as follows: the lack of an in-vehicle radio, which could’ve offered a nice distraction from the otherwise minimalistic bluesy guitar jingle that occasionally plays in the background. The soundtrack feels almost non-existent when I’m driving around, which isn’t necessarily a bad thing, as I enjoy the sounds of nature and all. And loud, roaring, or stuttering, engines. I simply wish there were more choices to toggle between on this front. You know, like when you’re actually driving a truck, since radios became standard features in automobiles in something like 1945.

There’s also no option to turn on a mini-map, which would make navigation more fluid and cut down the excessive interruptions to my flow of travel as I’m frequently checking my location on a separate map screen. However, I should say, the map that is included is very comprehensive and quite helpful. Finally, I dislike the total absence of other pedestrians or wildlife outside of a few birds. I appreciate the sense of isolation that I feel in being this lone pilgrim far out in no man’s land, but when I do happen to stumble upon small towns, trailer parks, campsites, or factories, it’s a bit odd to me that there are no signs of life; no other vehicles on the road that pass you by. I can conceive that the entire population was evacuated before the storm which preceded my arrival, but that’s clearly not the case as parked cars appear during the day which aren’t present at night. So, there are people… I just don’t see them, which is weird. 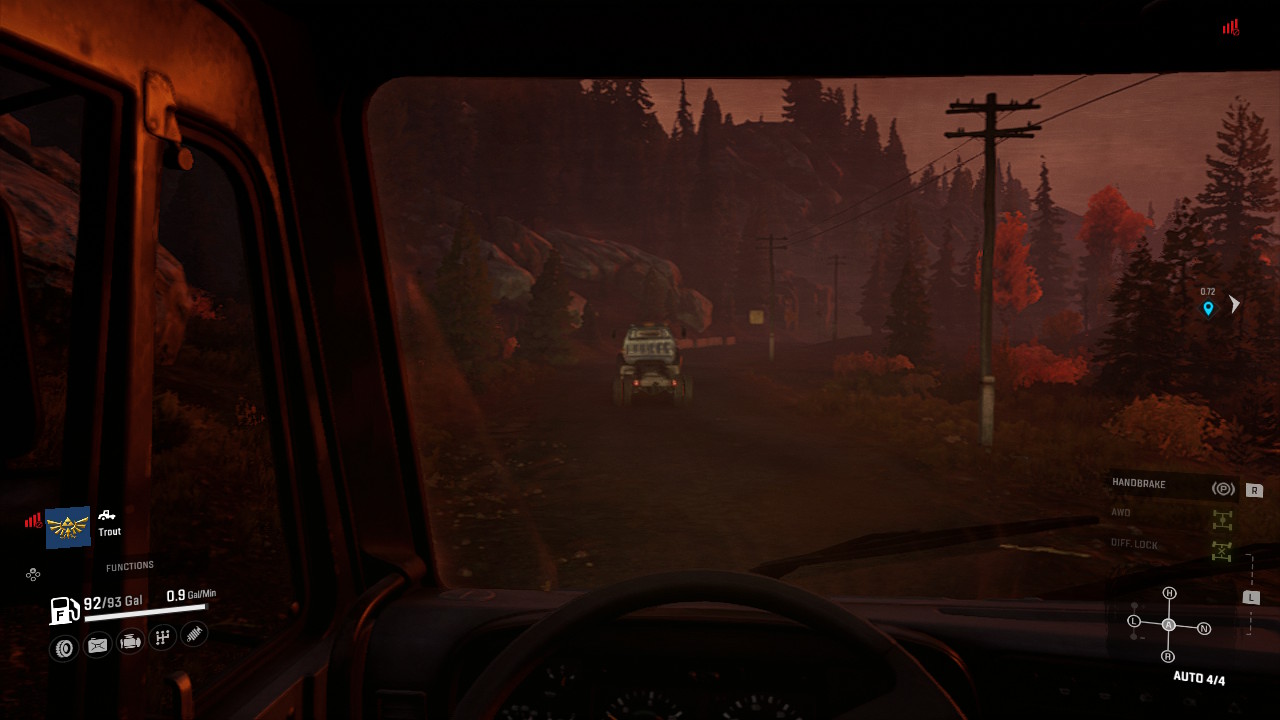 There’s one exception to this, and it’s a highlight for me: the game includes up to four-player local and online cooperative multiplayer (but no crossplay, sadly, yet). I’ve only had one opportunity to dip my toes in online play but SnowRunner seems like it was primarily designed with the enjoyment of friendly assistance in mind. Whether you’re helping your buddy pull their six-wheeler out a tough spot or getting dragged down the side of a cliff that results in both of you being up a certain creek with only a turd for a paddle, hilarious moments are bound to ensue.

It’s a personal policy of mine to only review games once I watch the credits roll, and if howlongtobeat.com is correct, it’s going to be quite a while before I publish a full-length critique of my time with SnowRunner. However, if you’re on the fence about it now, or are an RPG fan looking to try something different that involves clearing rockslides and saving sunken tankers instead of slaying wyverns and nekkers, then SnowRunner is definitely worth checking out. 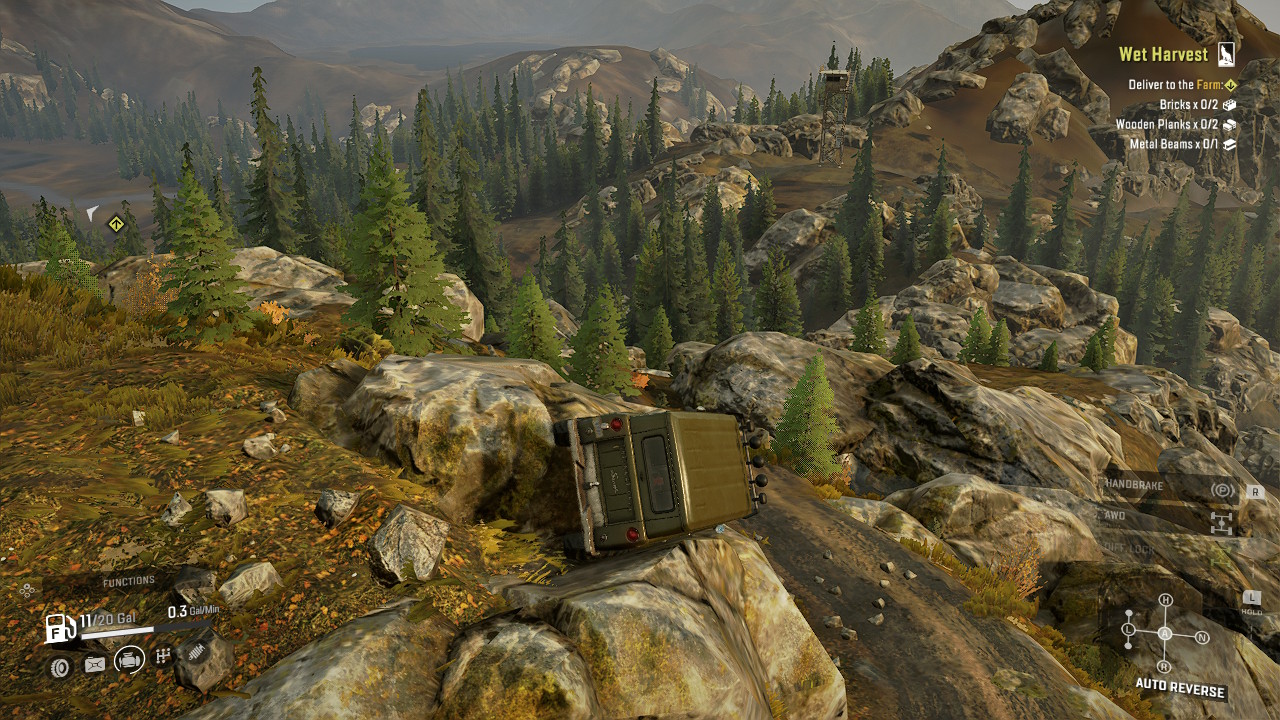