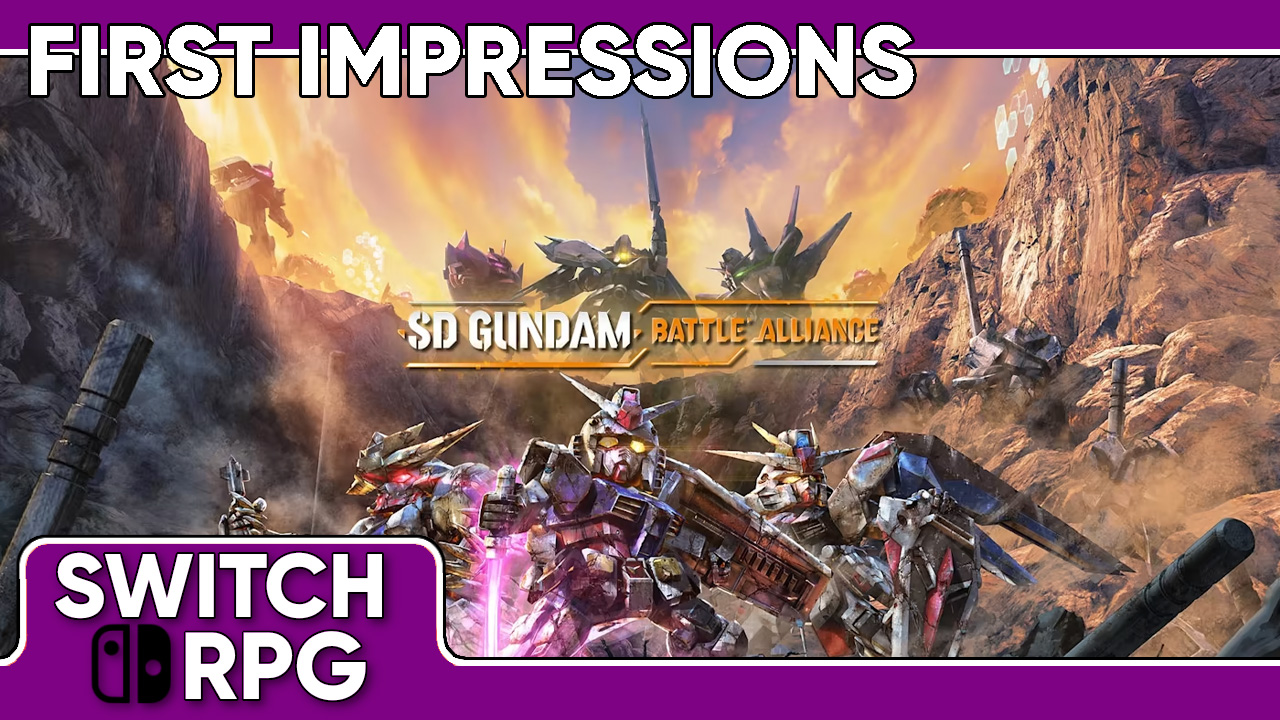 Gundam is no stranger to the video game world. Whether it’s arcade games, action RPGs, or strategy games, the Gundam franchise is massive in almost every way possible. I mean, even just the name is used alongside the term mecha when talking about battle suit franchises. So as an enjoyer of almost everything anime, as well as a casual action RPG fan, SD Gundam Battle Alliance caught my eye with its announcement. The battles so far have been a lot of fun, once you get used to the battle system and actually invest early on into the mobile suits that you’ll be using.

SD Gundam Battle Alliance is basically a culmination of several Gundam universes such as Mobile Suit Gundam SEED, After War Gundam X, and the original Mobile Suit Gundam. As such, it’s set up much like other games with intertwined universes: lots of universe breaks and needing to save the world before certain worlds are destroyed. You play a nondescript commander of a special team known as the Independent Mechanized Hybrid Technical Support Squadron (yes, that is the entire name) or the Gatheroad Squadron for short. But right in the middle of a mission, you end up being teleported elsewhere, thrown into a world known as the G Universe. 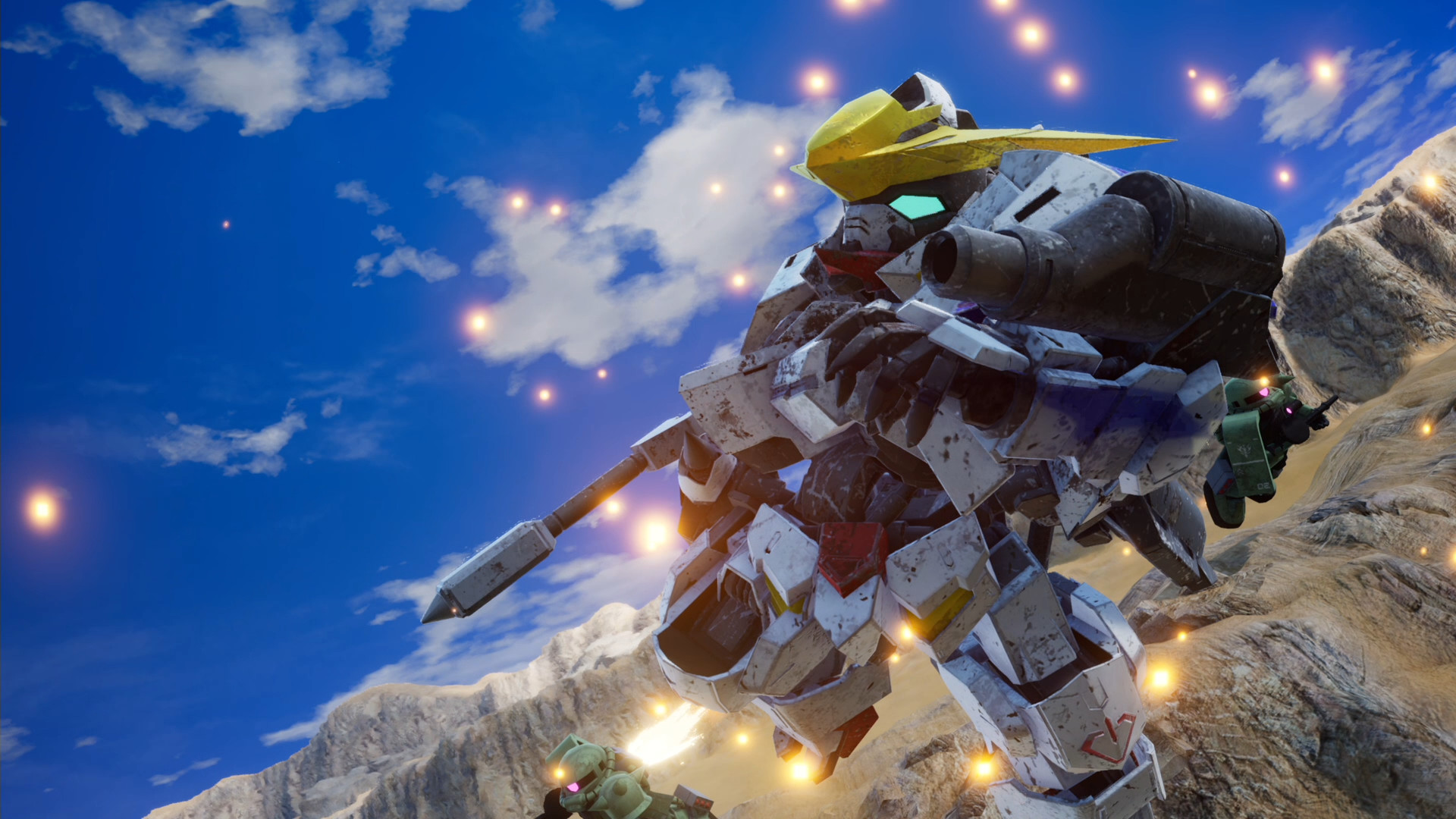 The general story beats are alright, although if you’re not a fan of Gundam, you’ll come out with an overload of information and probably more confused coming out of the game than you were going in. There’s quite a bit of infodumping, so this is definitely not the best game for newcomers, if you were looking at getting up to date with Gundam via this game for some reason. Another downside has to do with the automated text during some cutscenes and gameplay sequences. During cutscenes, the text passes by fairly quickly. And during missions, it’s hard to pay attention to what characters are rambling on about when you’re being surrounded by three enemies all firing projectiles at you. 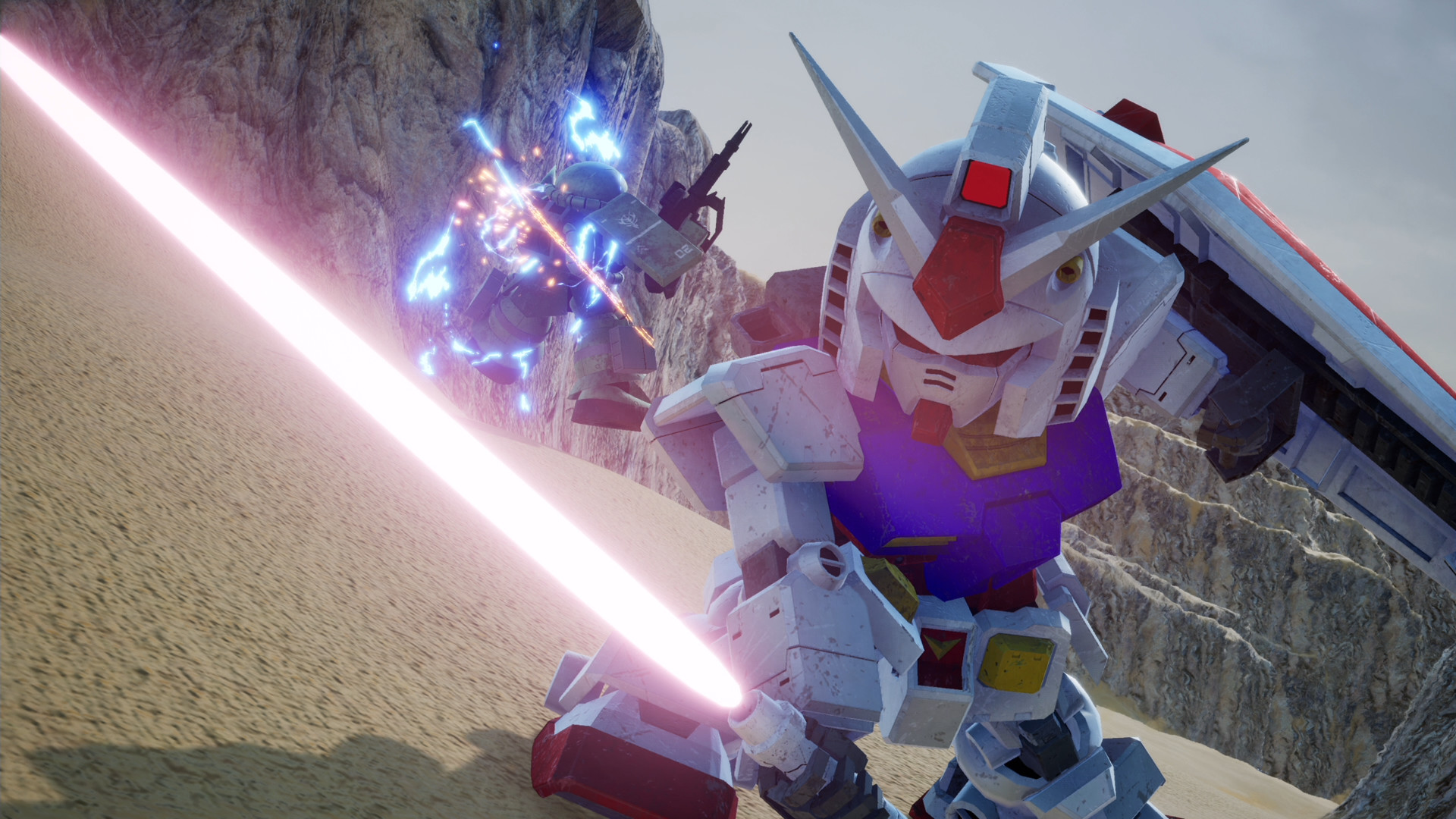 From this point, you’ll take on new missions where breaks in the universe are marked. Clearing these missions allow you to get a Fragment Key which can be used to repair that world in a separate repair mission. SD Gundam Battle Alliance is split between visual novel cutscenes and the action RPG battles. When it’s time to go on a mission, you can select the particular Gundam and partner that you’d like to take, with the potential of unlocking more as you progress through the story. If you’re more of a casual fan and are looking for some of the flashier Gundams, you’re going to have to play through a bit of the game prior to having those available to you.

Once you’re in a mission, you’ll pretty much be following way markers to different checkpoints on the map. Each map is small, with not a lot of reason to explore. As you move through the map, enemies will start appearing. Battles happen in real time and you can tell which enemies are focusing on you using the aggro lines that will lock onto your character. But, on the off chance that you aren’t drawing any aggro, you can use the mini-map to find any enemies that may be hanging out in the distance. 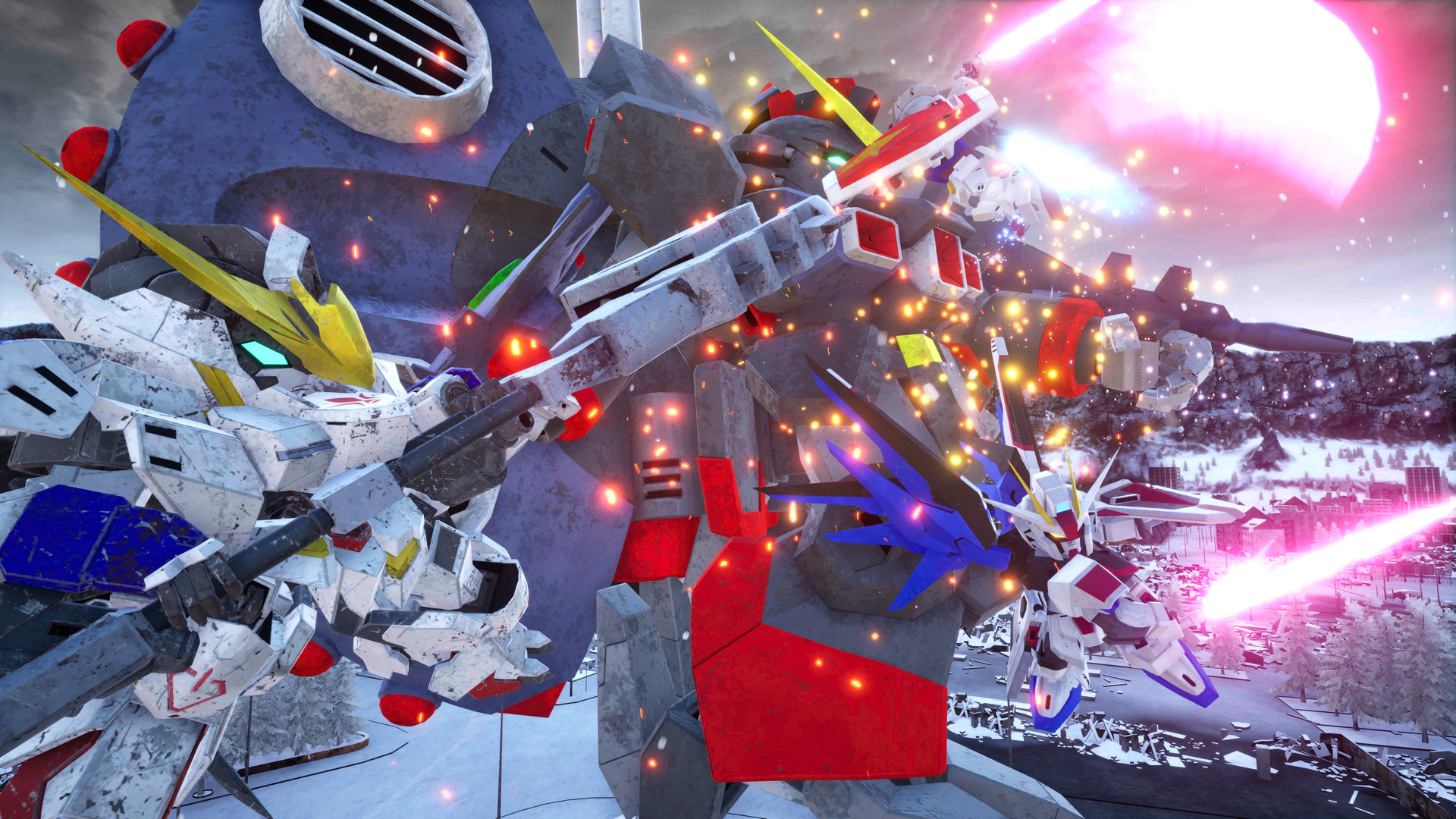 Camera controls do feel floaty and awkward, which is unfortunate given that this is an action RPG. General movement is slow, which logistically makes sense since these are large mobile suits. However, dashing, flying, and even fighting cost stamina and it gets used up in what feels like an instant. There is a lock-on feature, however you do have to be facing the enemy in order for it to register. You have both a heavy and light attack, which can be used interchangeably, as well as several gun attacks to target enemies at more of a range. Your ranged attacks are limited however, with you having to wait until your ammo reloads before using them again. This is a decent way to make sure that players aren’t gaming the system by just using gun attacks, but in moments where there are multiple enemies at a distance where you can’t use melee attacks, this just makes things more tedious. 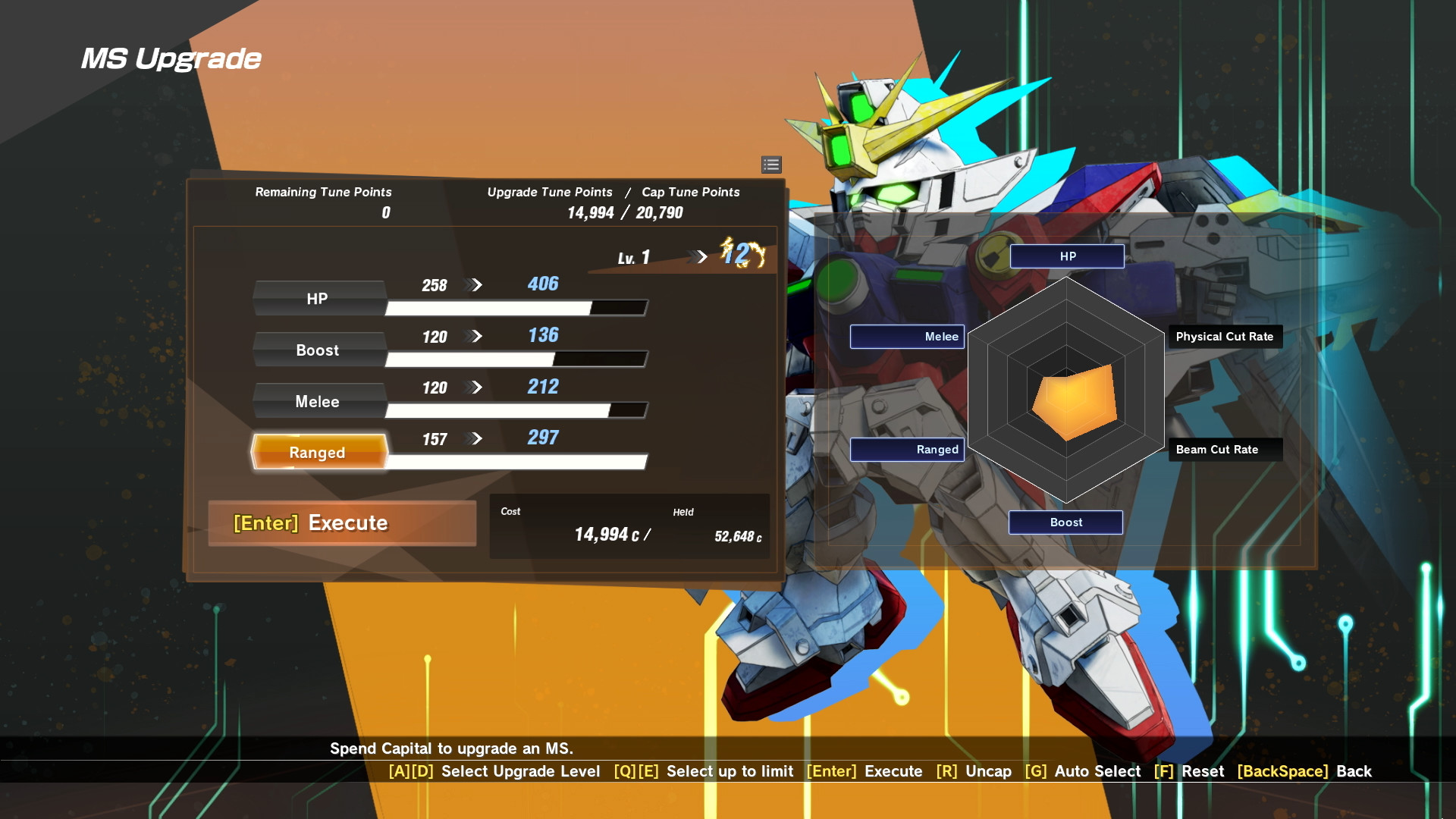 Outside of battle, you have the option of upgrading and unlocking new mechs. As you complete missions, you’ll be awarded capital, blueprints, and equippable parts. Capital is needed in order to upgrade one of four stats: HP, Boost, Melee, and Ranged. Each mech also has skill slots, with new slots unlocking at certain levels. Blueprints are needed to unlock new Gundam, and you can grind out the same mission over and over if you’re looking to unlock a specific suit. Once the analysis rate hits 100%, you will unlock the mobile suit and corresponding pilot. 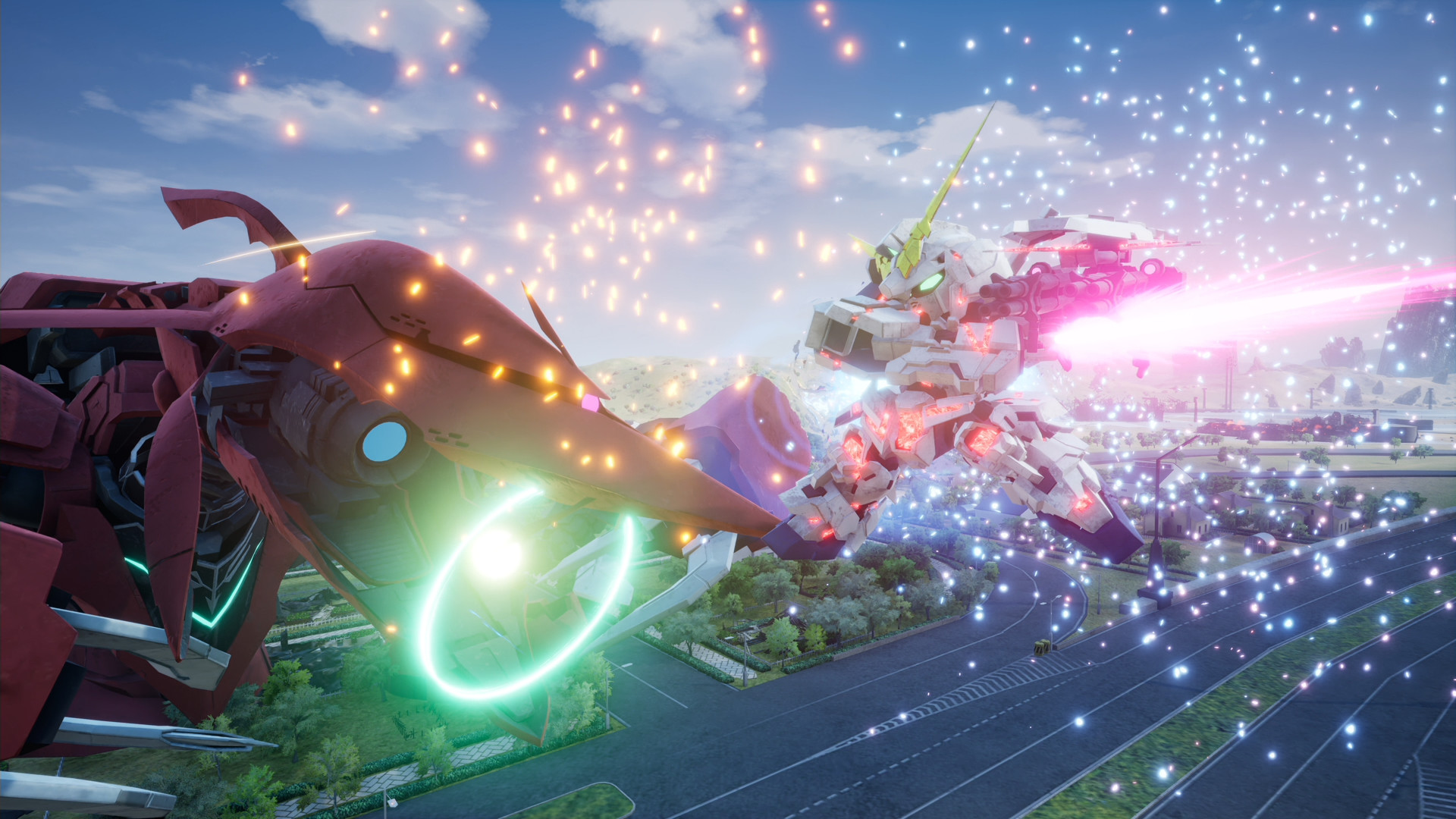 When it comes to the visuals, everything looks nice, although there is a general fuzziness around the models that seems to persist during battle sequences. But otherwise, the 3D models look very nice, with each of the Gundams looking pretty cool whilst in battle. The choice of going with more chibi models rather than models that are closer to canon was one that I think works in this game’s favor. Unfortunately, the same can’t be said for the backgrounds. Maps look pretty boring with muted color palettes, even in the larger cities. One thing that isn’t boring though is the OST. Given that we’re dealing with Gundam, the music has to be epic. There are guitars and synths for days, a combination that’s always sure to get the blood pumping.

Stay tuned for my full impressions in a proper review in the coming weeks!