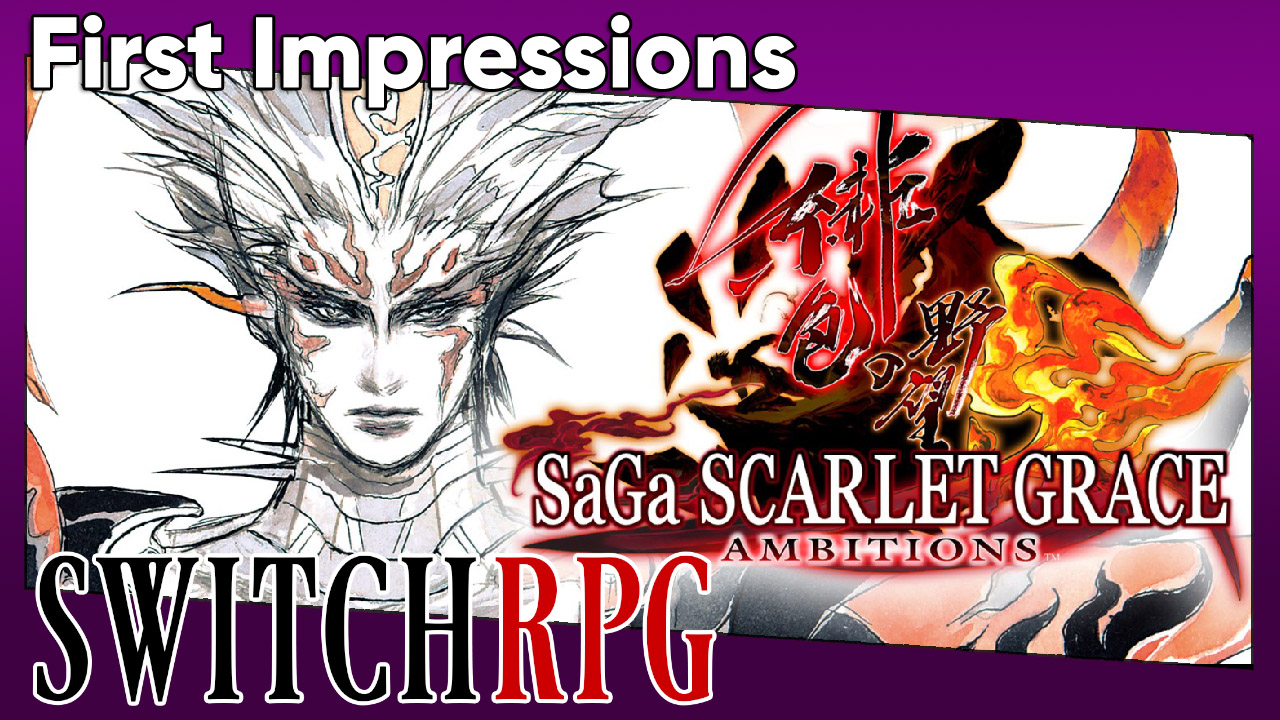 SaGa Scarlet Grace: Ambitions is the latest entry in the long-running SaGa franchise – at least, to be released worldwide. Like November’s Romancing SaGa 3 however, it isn’t technically a “new” game, as it originally released on Vita as a Japan exclusive in 2016, before the expanded version – notated by the “Ambitions” affix – released in only Japan once more back in 2018. As the resident SaGa fanboy, the eventual release of both Romancing SaGa 3 and SaGa Scarlet Grace: Ambitions worldwide was something that interested me greatly, though I’ve ultimately resonated much more with the former than the latter.

That is not to say SaGa Scarlet Grace: Ambitions is a bad game – it has most of the standard SaGa trappings that series fans will inevitably love – but some design changes and decisions have led me to not enjoying it as much as previous entries. For now, anyways. 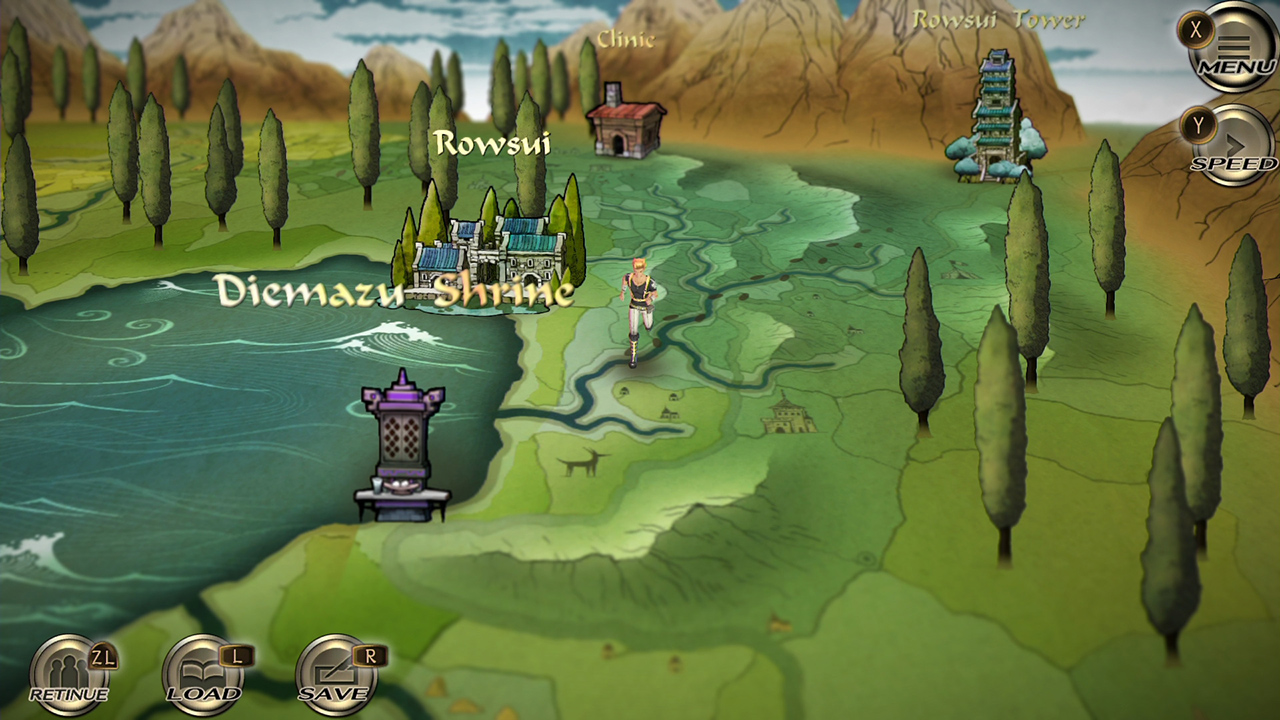 SaGa Scarlet Grace: Ambitions takes place in the aftermath of a near millennia-long battle against the Firebringer, a god who was cast out by their Celestial brethren after falling from grace. Prior to the events of the game, this entity would attempt to invade the world in order to wreak havoc upon the land. To combat this threat, a massive empire was born, which eventually was enough to completely destroy the Firebringer. With the evil god now shattered into pieces, so too would the Empire splinter, causing unrest and the subsequent wane in its influence and power.

SaGa Scarlet Grace: Ambitions follows the adventures of four individual characters – Urpina, Taria, Balmaint, and Leonard – as they make their way in this war-torn world. Each of these characters have their own aspirations and motives, which can be fine tuned thanks to the freedom of choice allotted by the plot design. No two journeys, even repeats with the same character, are sure to be the same, as your moment-to-moment decisions will forever alter the twists and turns of the path ahead.

Structure-wise, the story in SaGa Scarlet Grace: Ambitions adheres to many of the series staples: meaningful choice and consequence, as well as a scenario system that encourages multiple playthroughs through the perspective of different starting characters. As always, this is an ambitious task that most SaGa games- including this one- execute well, though the world design here makes some aspects feel less impactful than they did in previous entries.

While I can only speak for Leonard, the farm boy’s story, it did little to grab me in the 10-15 hours I’ve played thus far. A mediocre plot and flimsy characters aren’t necessarily new in the realm of SaGa, and Leonard and company feel pretty boring so far. That said, there’s likely a large chunk of events I’ve yet to experience, so things could turn out for the better as I continue on in my adventure.

The game world is presented through an interactive world map that has an almost “boardgame feel” to it. Points of interest will pop in and out of existence based on proximity, and interacting with any of these points of interest will either throw you into a battle, a menu, or a cutscene – including dungeons and towns. Apparent budget constraints squash any hopes and dreams of putting your boots on the ground in a town or dungeon, making the interactive world map the only spot the player will actually move about in a traditional sense. 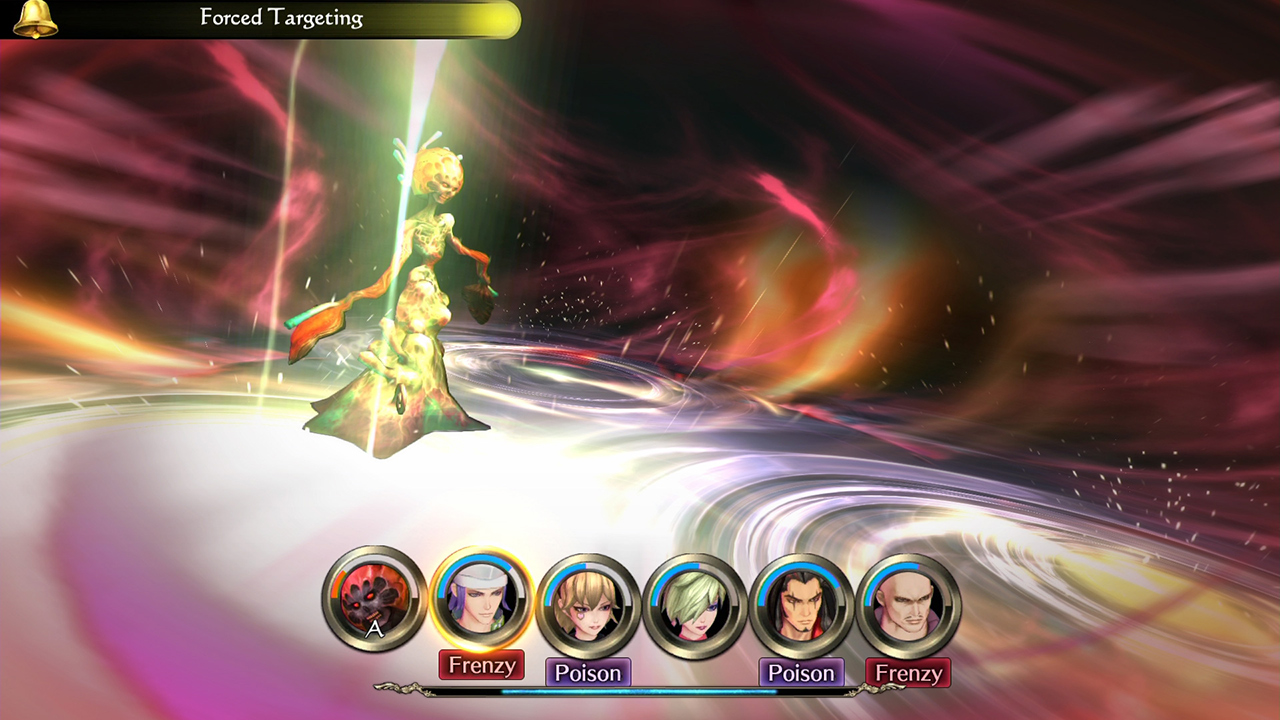 Combat is what keeps many fans coming back to SaGa, and the fleeting opportunities for exploration in SaGa Scarlet Grace: Ambitions result in an even heavier emphasis on battles. The battle system rarely disappoints in SaGa games, and this one is no exception – in fact, it may be one of the best iterations of the series. Staple character progression systems – glimmering (learning new abilities in-combat) and random stat increases after battle (based on performance) – return, but the turn-based battles are much more strategic thanks to a few new features: BP (battle points), the timeline, and united attacks.

Your team has a set number of BP it can assign per round, and all party member abilities will use a certain amount of it based on the skill in question. This means that during some rounds, certain characters (and enemies) may not act at all and will “defend” by default. The timeline will display the order of events, and if you manage to kill an enemy that is stuck between two party members on the timeline, a “united attack” will occur. These attacks are essentially free bonus damage that can help turn the tide of battle, but bear in mind that the same concept applies to enemies, making it possible for the player to be on the receiving end of these extra attacks, as well. 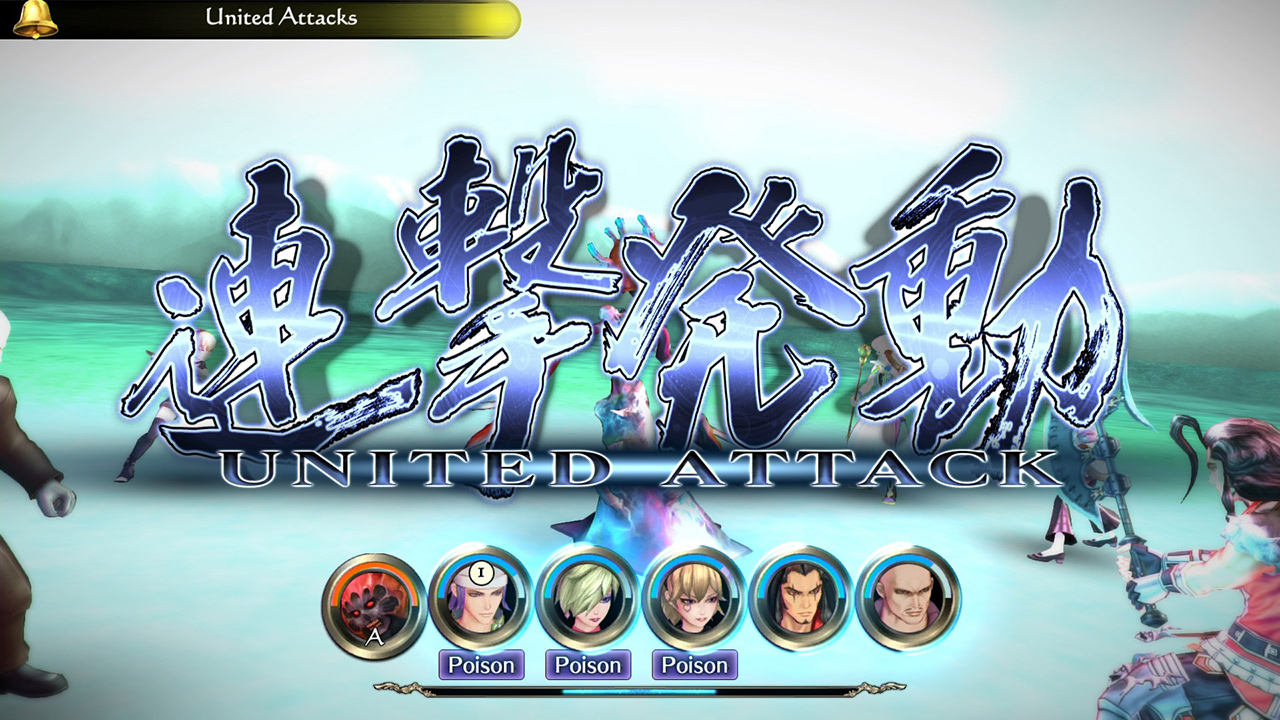 Of course, status effects and buffs/debuffs can also alter the timeline, collectively resulting in more sophisticated, strategic battles than the typical turn-based RPG. SaGa Scarlet Grace: Ambitions draws a fine line between full-on turn-based and strategic combat, resulting in a hybrid system that is incredibly fun to play once you get a feel for it. Because more strategy is involved however, the average battle can easily last between 5-10 minutes, vastly extending the potential grinding time involved with overcoming an encounter-based roadblock – a common occurrence in the SaGa franchise.

For perhaps the first time, SaGa Scarlet Grace: Ambitions provides all the information necessary for you to understand and master the game mechanics, all without you having to seek external resources! Extensive tutorials and tips are provided right from the menu, serving as a quick reference to all of the layered mechanics found within the game. While this may not seem like a big deal when considering the average game, SaGa titles are notoriously obscure, so (finally) having an easy-to-access compendium from within the game is just fantastic.

SaGa is no stranger to – dare I say – unconventional graphical styles, though this generally works to their advantage. SaGa Frontier 2 is probably the best example of this, with its watercolor design that is as timeless as it is beautiful. While the world map presented in SaGa Scarlet Grace: Ambitions is somewhat reminiscent of that aesthetic design, the character and enemy art are not cut from the same cloth and, as a result, clash a bit with it. 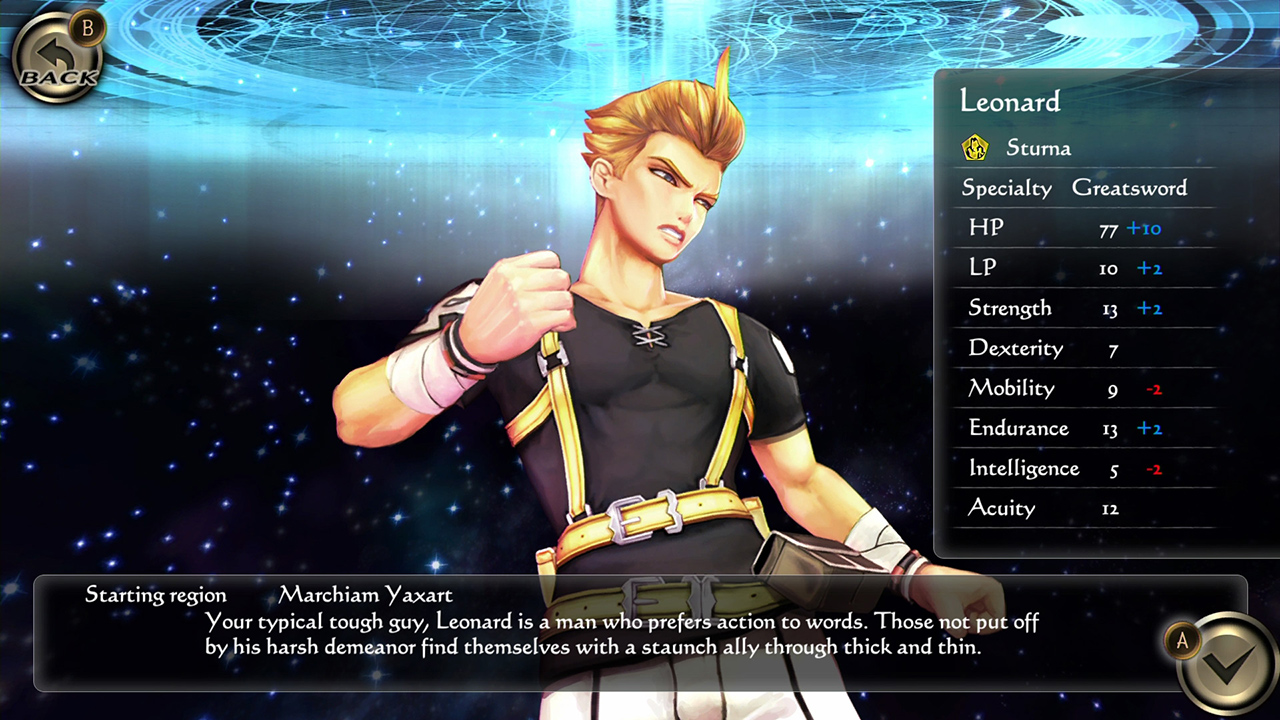 Perhaps budget constraints are to blame once again, but one can’t help but wonder whether a more retro design (pixel art) would have allowed the team to have a more consistent look, and for the same price. Although I realize that the skeleton of SaGa Scarlet Grace: Ambitions originates from the 2016 Vita version, it still looks a bit “off” even by those standards. Fortunately, at least the combat animations are true to traditional SaGa form, and Kenji Ito returns to compose yet another impressive soundtrack. It is hard to beat both the superb graphical and audio design of its predecessors, but I do appreciate the attempt at designing it to be a little more friendly to the modern era.

I have to be honest: SaGa Scarlet Grace: Ambitions hasn’t turned out to be quite what I expected, and ultimately may end up being one of the more disappointing entries in the SaGa franchise. On one hand, I commend the team for making all of the gameplay information easily accessible, as well as changing up the combat enough to make it feel brand-new while retaining the core features that make a SaGa game, well, SaGa.

But the changes to the world and how it can be interacted with make the experience feel really underwhelming, and farmer boy Leonard has done little to keep me invested in his tale – for now, anyways. In typical SaGa fashion, SaGa Scarlet Grace: Ambitions is hard to recommend for the average RPG fan, even more so considering I’ve yet to complete the game myself. For now, I’ll be setting SaGa Scarlet Grace: Ambitions down for other things, but perhaps I’ll revisit it again in the future.

With all of that in mind, I don’t regret purchasing SaGa Scarlet Grace: Ambitions, even though it may not be my cup of tea. I love this franchise, and hope to see even more entries into the series – both old and new – come to Switch through this kind of support.

I am quite enjoying the game so far – I have around 15 hours in. I am playing as Urpina and her story is relatively interesting and she has a half decent roster of supporting characters. I actually don’t mind the world exploration being a bit limited and I quite enjoy the pop-up book aesthetic. The battles are definitely where this game shines. The decisions of which techs to use each round make it feel very strategic and keep it from feeling stale. I agree some of the crafting requirements mean you do need to grind a fair bit. But… Read more »

All good points! I think my biggest mistake was going with the Farmer, as it seems that other main characters have a better narrative than he does.