Libra: Ni No Kuni: Wrath of the White Witch (Switch)

Prior to the release of the Switch in 2017, I was almost exclusively a PC gamer for over a decade. The “PC master race” mentality came at a cost though, because many incredible RPGs came and went that I never had the chance to play. That is precisely why I love the Switch and its healthy catalog of ports and remasters – while re-releases may not be exciting for everyone, they can give the opportunity for many to either re-experience a cherished title or, in my case, play something for the first time.

Ni No Kuni: Wrath of the White Witch is one of the more recent ports to arrive on Switch, and it originally released on the PS3 back in 2011 in Japan before going worldwide in 2013. While PC and PS4 recently received a remastered version sporting improved graphics, the Switch version – from what I can tell – is almost identical to the original PS3 release.

Ni No Kuni stars Oliver, a boy that is dealt a tragic hand that would challenge anyone’s beliefs, let alone those of a mere child. Through this event, he discovers that he may be the key to saving a parallel world – one which could lead to a potential course-correction on his own. This other world has its own set of problems though – the dark djinn, Shadar, renders the hearts of his victims vulnerable to impurity and corruption. Despite the combined efforts of great sages in this parallel world, they’ve been unable to stop Shadar, however, there are those that believe Oliver may be the key to driving him away for good.

In many ways, Ni No Kuni is the embodiment of any child’s dreams of becoming the hero of a fantasy tale. Not only does this apply to the story itself, but also its overall presentation, largely thanks to the collaboration with the legendary Japanese animation company, Studio Ghibli. The result is a narrative that can appeal to all ages, and visuals (and music) that hold up incredibly well despite the original version releasing almost a decade ago. 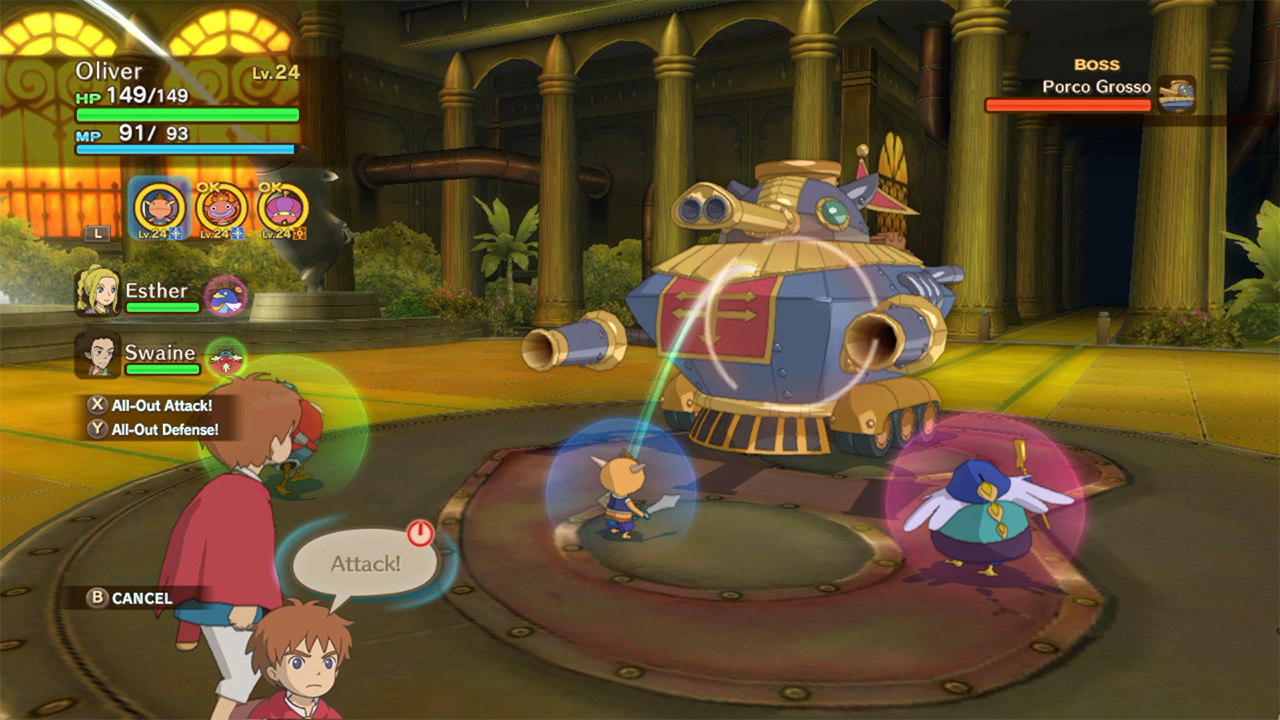 Similar to the Pokemon series, Oliver and his companions wield and tame familiars, which do their bidding in combat. These creatures each have their own levels, strengths, and weaknesses, and can be swapped between limited sets during fights. Battles are action-oriented, with some menus serving as a quick “pause” in order to best command your familiars and prepare for what is to come. Ultimately, combat is tuned in such a way that even the most trivial encounters are stimulating.

Beyond the main campaign lies loads of side content, from the traditional fetch quests and hunting notorious monsters, to mending the hearts of the broken and capturing certain familiars for enthusiasts. In short, there’s a lot of content here that will easily keep you busy for dozens of hours. Overall, I’m very pleased with Ni No Kuni on the Switch, and can’t wait to continue my adventures with Oliver, friends, and that adorable Mr. Drippy.

Be on the lookout for my full review of Ni No Kuni: Wrath of the White Witch soon!

Damn hope i have much on me so i can buy this game. So many greatgames on Nintendo switch. But this is the one ive been waiting to be on sale so i can buy it

This was so wonderful