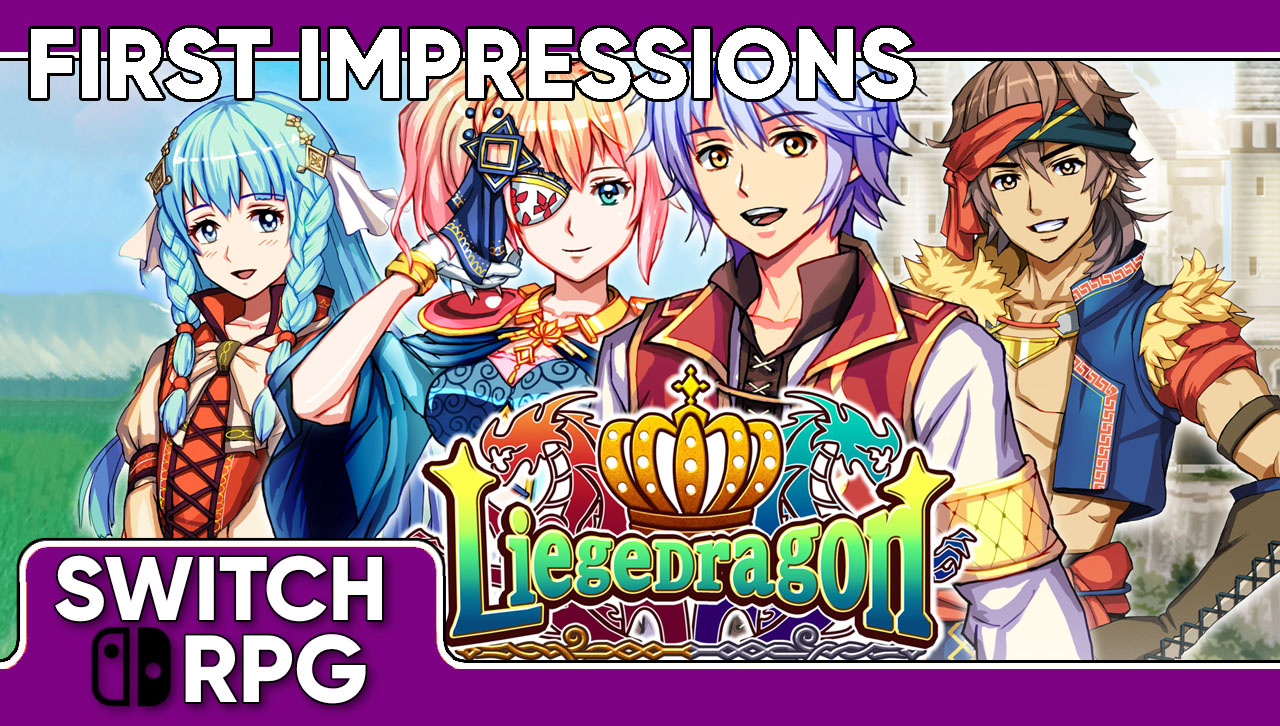 KEMCO is a company known for publishing large numbers of budget-friendly, retro-inspired RPGs across a multitude of platforms. These games vary in quality from game to game and developer to developer, as KEMCO’s various partners each take different philosophies for each release. This has given the publisher a reputation for making shovelware RPGs, though as noted in our numerous reviews of KEMCO-published titles, the actual quality can vary from abysmal to outright fantastic. Perhaps the developer that most aligns with the popular opinion of KEMCO is EXE Create, the one responsible for the bulk of KEMCO publications year after year. EXE Create pumps out RPGs like candy, using a common engine and iterating on a core set of features to create a series of beloved (or reviled) titles every year.

Somehow, in the midst of the onslaught of games, EXE Create also finds time to go back to its roots and remake classic games from their library. Frane: Dragon’s Odyssey, released last year, jumped back to EXE Create’s early action RPG series, while the more recent Asdivine Cross brought a remake of the game that kicked off the entire Asdivine series in 2011.

Today, KEMCO drops another remake of a 2011 RPG, another traditional JRPG called Liege Dragon. This game has all the tropey trappings of the stereotypical JRPG, including an amnesiac hero, androgenous supporting characters, an epic struggle between light and dark dragons, a quest for relics of ancient heroes, and more. I’ve had the opportunity to put several hours into Liege Dragon so far, and I’m here to offer my initial thoughts on how well this remake of a decades-old EXE Create title stacks up against other, contemporary budget RPGs.

Liege Dragon opens by telling the tale of the Evil Dragon Abigore, born of human greed, anger, and vice. When three heroes rose up against the Evil Dragon, their virtues gave birth to an opposing force, Oberon the Holy Dragon. Together, the Holy Dragon and Heroes sealed away Abigore, forcing him into a deep sleep. The heroes went on to found three great nations, who, over the centuries, fell back into the tensions and conflicts that birthed Abigore in the first place. One thousand years later, Abigore awakens once more, sending his minions into the world to stir up fear, resentment, and hate anew.

From this conflict, a young amnesiac man appears at the foot of an altar to the Holy Dragon. Dubbed Yuran (meaning friend of dragons) by an old man who discovers him, the young man is quickly swept up into the growing conflict between Abigore and the three nations vying for power in this chaotic age. Yuran teams up with three companions, one from each of the three great nations, and together they set out to regain the power that was lost and seal away the Evil Dragon once and for all.

These exposition events all play out over the first 30-60 minutes of the game, the bulk of which is made up of long, back-to-back cutscenes and dialogue. For a game that likely runs only 15 hours total, this long delay before getting to the action can be jarring. Thankfully, while there are still some lengthy dialogue sequences as the game goes on, the majority of my continuing time with the game has been spent exploring dungeons, battling monsters, and managing my party’s inventory and spell lists. 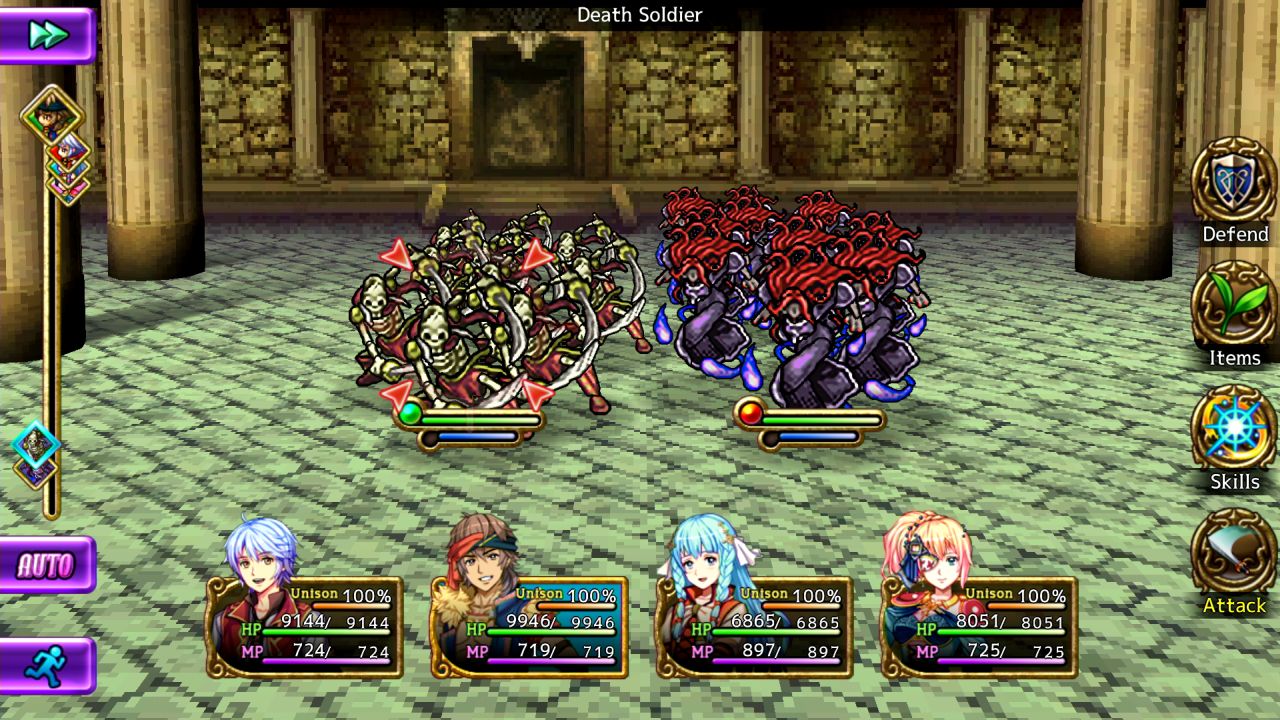 Combat in Liege Dragon is a by-the-numbers affair. Your party lines up against a group of enemies in turn-based combat, using a combination of standard attacks, character-specific abilities, and elemental spells that can be learned by expending colored gems that drop off enemies. Standard elemental weaknesses apply, and in general, the level of difficulty is never too high, save for one or two early boss fights. Characters also have a “Unison” meter that fills at a snail’s pace from battle to battle, which can trigger a massive group attack on a single monster at random.

Outside of battle, characters move from town to town and dungeon to dungeon with a basic, point-and-click style map, with no overworld to explore. You can upgrade your weapons and armor using a simple synthesis system, and unlock moderate item rewards by filling out a “Monpledes” (monster encyclopedia), which is filled in through a combination of examining monsters using a cheap, wind-element spell and by defeating a certain number of each monster. Each town comes with a small subquest that sends you back to an earlier dungeon, again for a modest item reward. Outside of that, there isn’t a terribly large number of things to do outside of bouncing between dungeons and story beats.

Compared to modern EXE Create titles, Liege Dragon is as bare bones as they come. The glut of bonus features (good and bad) you might find in a more recent Asdivine game or in something like Miden Tower or Alvastia Chronicles are nowhere to be found here. It makes sense, given that this is a remake of a game from 2011, but it does leave the game as a whole feeling a bit hollow. We’ll see if the game opens up at all as I put more hours into it, though. Look out for my final review in the coming weeks!

All things being equal, I’m still enjoying Liege Dragon, but I’ll need to roll credits on it before I can give a positive or negative recommendation.