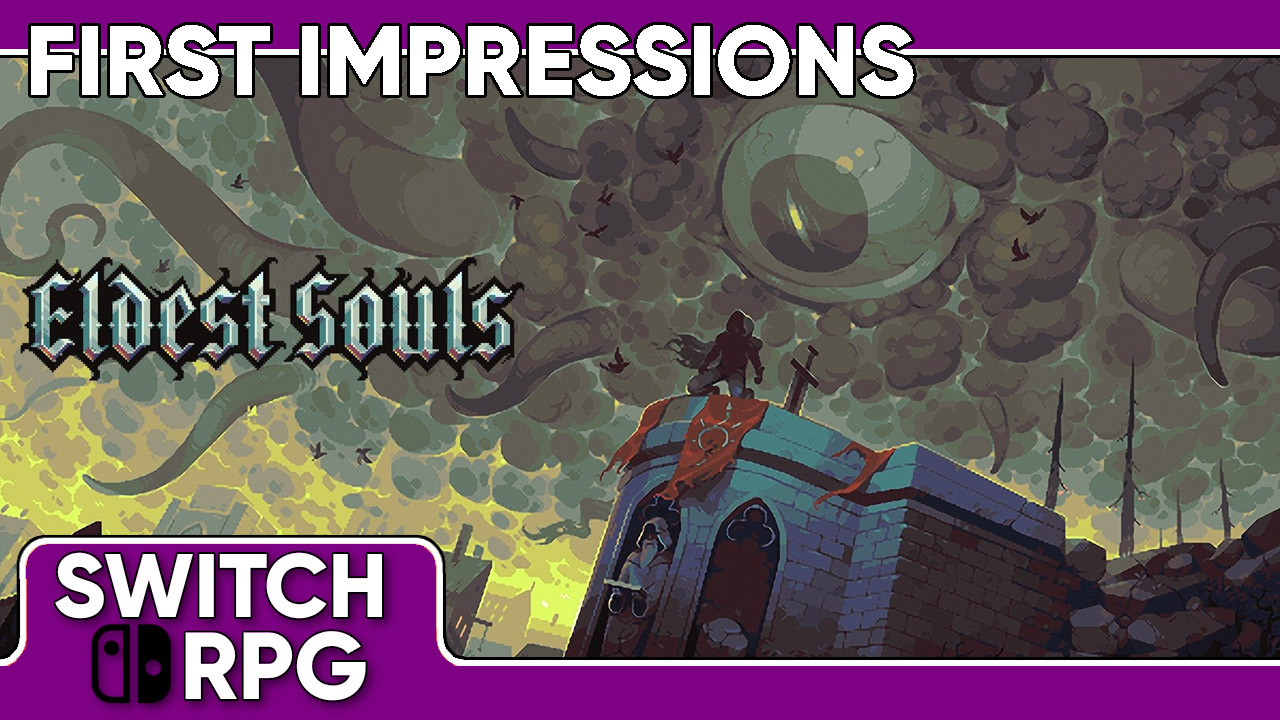 Eldest Souls is Fallen Flag Studio’s gloriously pixelated and thoroughly challenging Boss Rush action RPG. At first glance, these boss fights have much in common with other action RPGS that have Souls in the title, so you know the game has been on my radar. I’m glad to report that once I got into the game, I discovered exploration sequences between the fights that were full of story elements, evolving puzzles, items to find, and even branching paths leading to different bosses. These sections do alot to flesh out atmosphere, world building, and pacing of a game where combat is tense because you are always a mistake or two from death. I can already tell that Eldest Souls will test and retest your skills – and I have only fought four bosses at this writing! Let’s dig a little deeper: 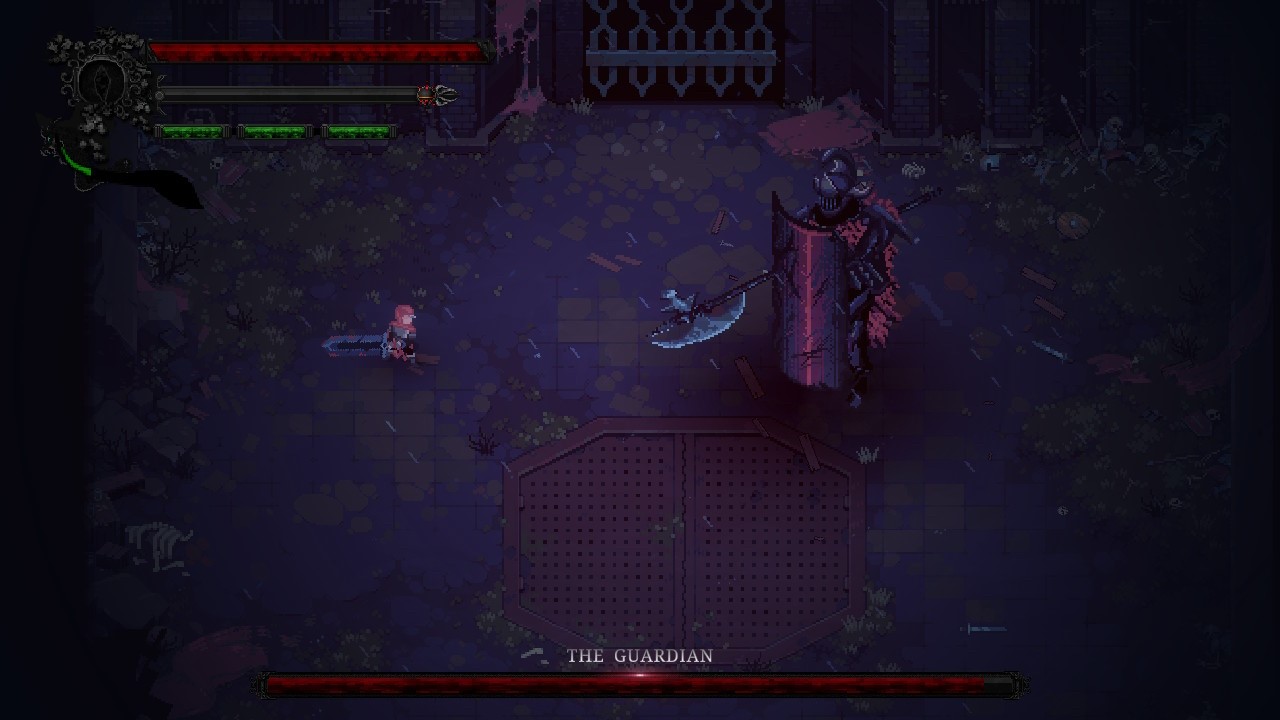 This is the game’s second boss, and his second phase is pretty cool!

I’m going to leave out a few of Eldest Souls’ significant plot points so I don’t spoil too much, but imagine a world where long ago the gods were conquered and locked away. Then imagine one of the gods – a malevolent one at that – took over the cathedral where the gods were imprisoned in and started subjecting them to twisted experiments. Eventually, this fallen cathedral became such a source of evil that humanity rallied together and attempted a great (and failed) crusade to infiltrate and abolish it. This is the part of the story where the player comes in, arriving as one lone soul who represents a last hope for humanity to overcome the horrors of the cathedral.

Now for the good stuff: the combat in Eldest Souls is intuitive and has lots of nice touches anyone familiar with the genre will appreciate. I particularly enjoyed the fact that fully charged swings of your obsidian sword will put you into a bloodlust state that means attacks leech life back. This is one of my favorite risk/reward mechanics in a melee action game: attack instead of dropping back to and you don’t need to heal anymore if you pull it off. Well it’s a good thing I like this mechanic because there is no other way to heal at first.

But that’s one of the cool things about Eldest Souls: you can respec at any time and different boss souls allow you to customize your moves with different effects, buffs, debuffs, combo moves, extra heals, etc. You will be able to customize your character to the playstyle that suits you the most for any given boss. You can respect on the fly if your old build isn’t suitable for the next challenge. I love this.

I want to be clear, I’m just scratching the surface of the combat and character development. I have so much to learn and discover that I am quite excited to see just how cool I can make my character. For now, know the first few hours of Eldest Souls deliver a lot of what I believe fans of the genre want from a stamina-based melee action title. I know the challenge will put some off, but if you are up for it, this little darling of an action RPG seems poised to take you to pixelated heaven. 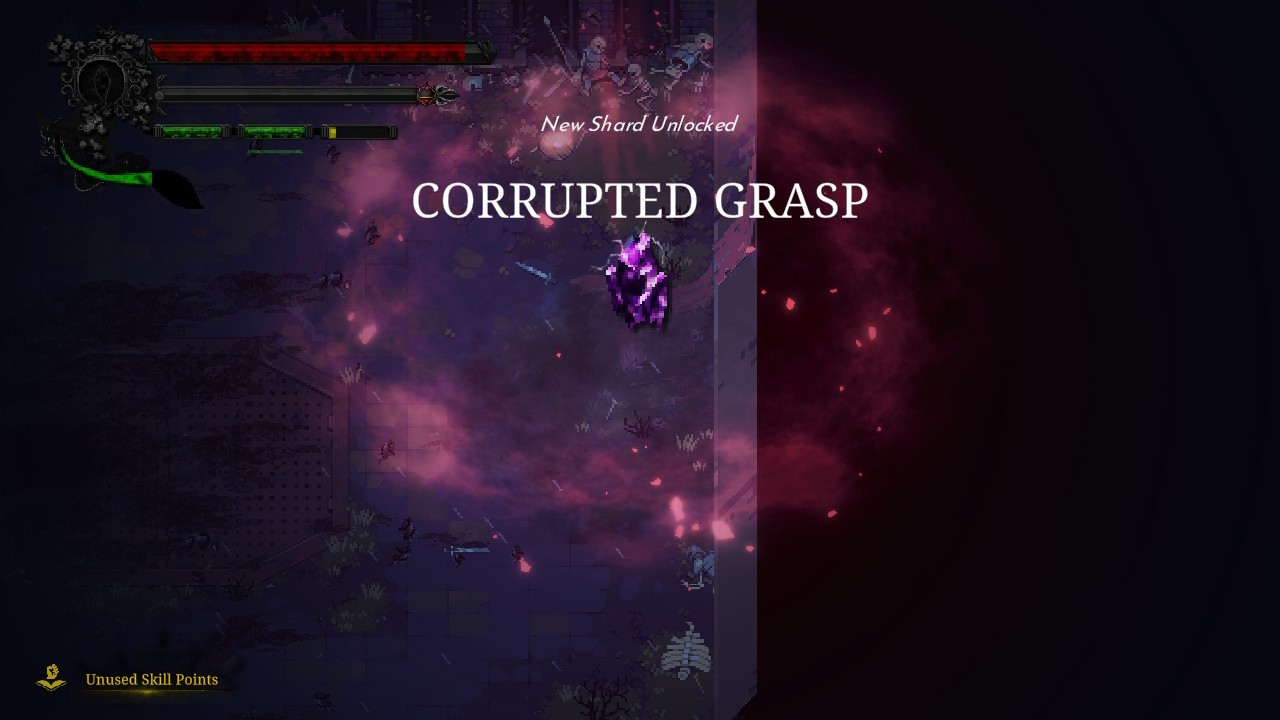 It’s a great feeling to see the boss defeated screen, no matter how many times it happens.

There is much that I already like about the combat, character development, and exploration. I am not very far into the game at this writing, but I look forward to enjoying it thoroughly. Some positive things that stood out in the initial few hours:

There was far less I disliked about Eldest Souls than what I liked. Still, I noticed a few things that players should be aware of:

I will be completing Eldest Souls and penning the review for the site, so we will have much more time later to get into the nuances of combat and boss design. Until then, keep hacking and slashing your way to victory.