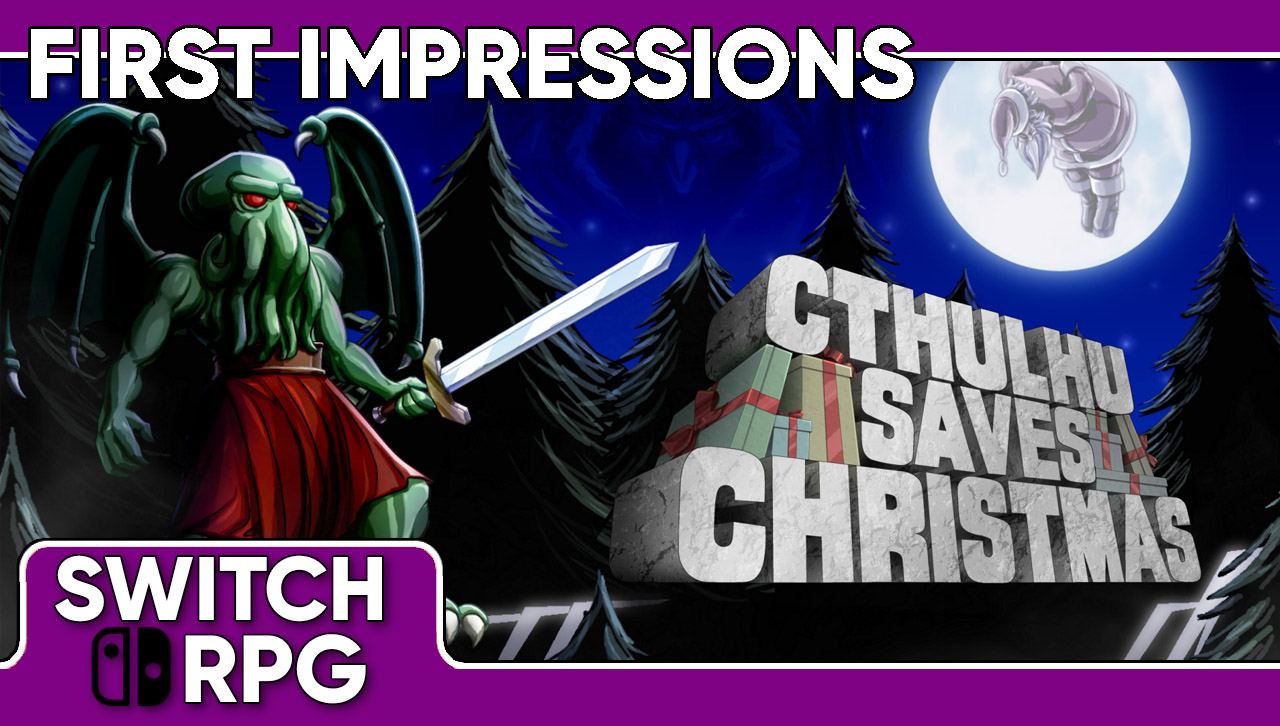 I have an interesting relationship with Zeboyd Games. Many years ago, I discovered two old-school RPGs that thrived on poking fun and sarcasm, those titles being Cthulhu Saves The World and Breath of Death VII. As a fan of pixel-based RPGs, these games felt both comforting and fresh due to how they went “against the grain” in regards to storytelling.

This is why I was pretty excited about the announcement of the return of the tentacle monster in the form of Cthulhu Saves The World. Having been a bit disappointed by Cosmic Star Heroine (just not my thing, but I know many adore it) I was excited to see everyone’s favorite monster take up the sword once more. This time, he’d have another important — nay, an even more important — task at hand, though.

Cthulhu, for everyone’s sake, must save Christmas. 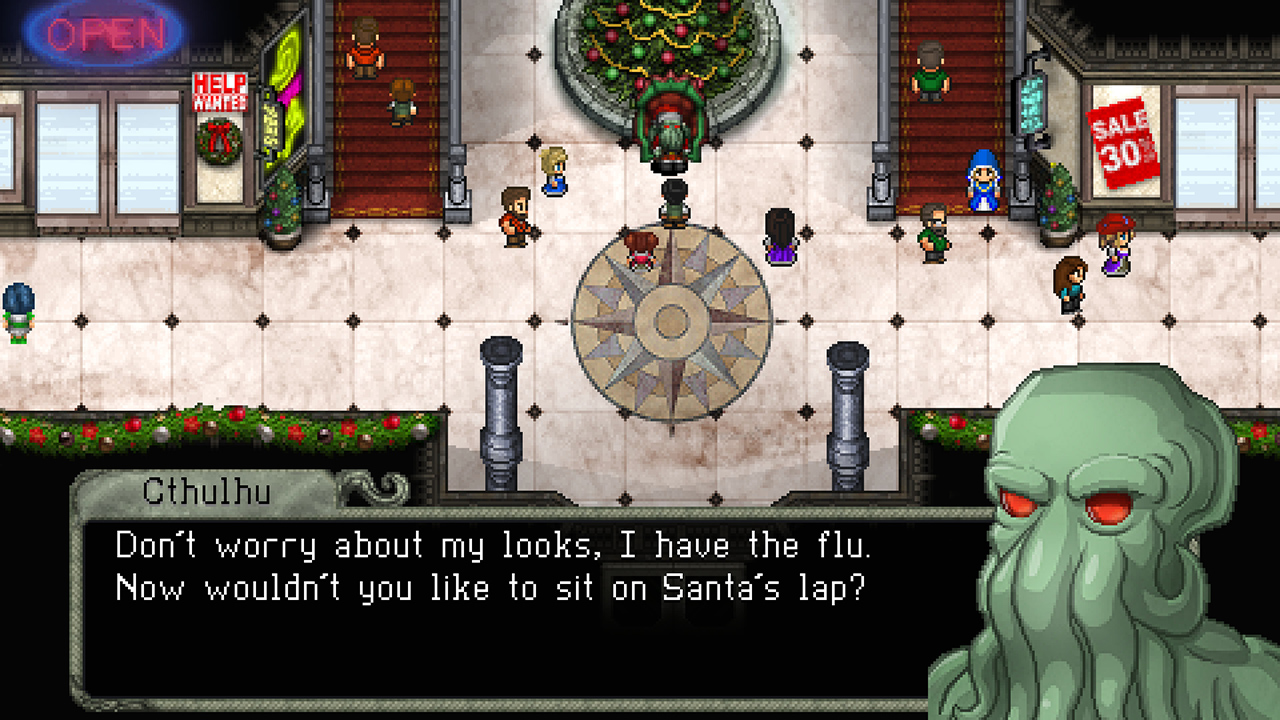 Cthulhu, the loveable destroyer of worlds, awakes on the eve of Christmas to find a present from Santa(?). Questioning the validity of such a package, knowing good and well he is completely evil and undeserving, he hesitates for just a moment before succumbing to the gravity pull spurred on by gifts at Christmas time. Unfortunately, opening the present releases a mysterious mist that robs the tentacle monster of the majority of his powers. In return, of course, Cthulhu vows to slay the bearded wonder in the red suit…but things are a bit more complicated than they seem.

The League of Christmas Evil – not Santa – is responsible for sending his (and other) nefarious package(s) out to unsuspecting customers. The League has kidnapped Santa and are dead set on taking over the holiday for their own, twisted plans. Will Cthulhu, along with a band of adventurers (including the granddaughter of Santa), be able to save Christmas, or will it forever be stained by the League of Christmas Evil?

Cthulhu Saves Christmas very much relies on jokes, sarcasm, and breaking the fourth wall to both convey its story and develop its characters. As a fan of this method of delivery in the past, I all but expected for it to be as endearing as ever but it was, in fact, a bit of a disappointment. It’s not that the writing isn’t up to par or anything, but rather it very well may be that my tastes for these kinds of things have changed over the years. While it was still easy to chuckle at Cthulhu and company at certain points, it became less effective over time.

That said, this type of humor was at its best in-town, where we could see how Cthulhu would react to serving (or helping himself) at a soup kitchen, or watching the latest holiday flick at the cinema. The narrative certainly had its moments, and is one that should never be taken seriously, but it ultimately has fallen a bit flat in comparison to the joke-ridden tales of yore, like Breath of Death VII and Cthulhu’s first endeavor. Perhaps I’m blinded by nostalgia to an extent, or again, it could just be that my tastes have changed for this type of thing. 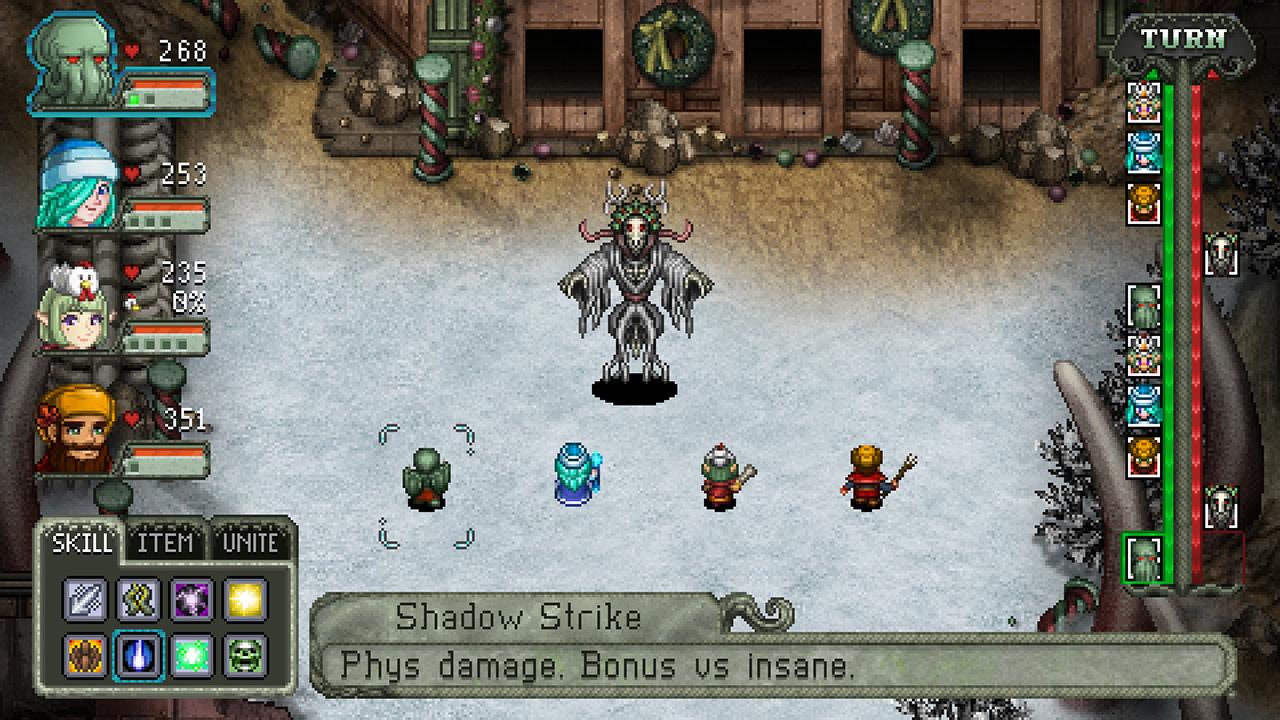 Cthulhu Saves Christmas is a turn-based RPG that feels quite similar in composition to Cosmic Star Heroine, where each character’s array of abilities have certain usage limits before they must be recharged – in this case, via guarding. Enemies have weaknesses that can be exploited for additional damage, and should be used to cut down on the number of turns needed to complete any given encounter. Each area has a set number of random encounters that can either be naturally engaged, activated immediately via the menu, or avoided entirely — the choice is yours. While the player can choose to avoid enemies entirely, bringing any map’s enemy counter to zero allows you to freely explore without having to actively avoid random encounters, which is nice. Furthermore, clearing an area grants you some sweet bonus experience for your efforts.

Each party member has an assortment of abilities that they’ll learn over time, which can then be assigned and taken into combat. There are a few slots that are chosen at random each time you enter combat from your list of currently unassigned abilities, but there are ways to reshuffle those, as well. There are A LOT of abilities to choose from, but you’ll likely stick to the select few that tend to do the most damage overall – at least when it comes to a standard difficulty run. That’s not even considering united attacks that allow two party members to team up and unleash a joint ability, with its potency based on a separate charge system. Options are certainly appreciated, but again, you’ll likely just default to whatever is most efficient at killing en masse.

In between hostile maps lies the town, which isn’t traversed by traditional means. Instead, Cthulhu can choose between an assortment of text-driven activities that generally reward items or equipment. While these bits, as previously mentioned, were my favorite from a narrative perspective, they weren’t really stimulating gameplay-wise due to their static backgrounds and text-driven nature. There’s no free-form exploring to do in-town, and you are limited to a list of menu options that just leaves you wanting more freedom. That said, there is potential incentive for multiple playthroughs due to this design, seeing as guiding Cthulhu towards specific actions in-town can potentially lead to events that would be otherwise impossible to experience (I cannot confirm this for certain but it certainly appears that way). Overall, the gameplay feels a bit limiting by design outside of combat, but does provide some sort of satisfaction either way. 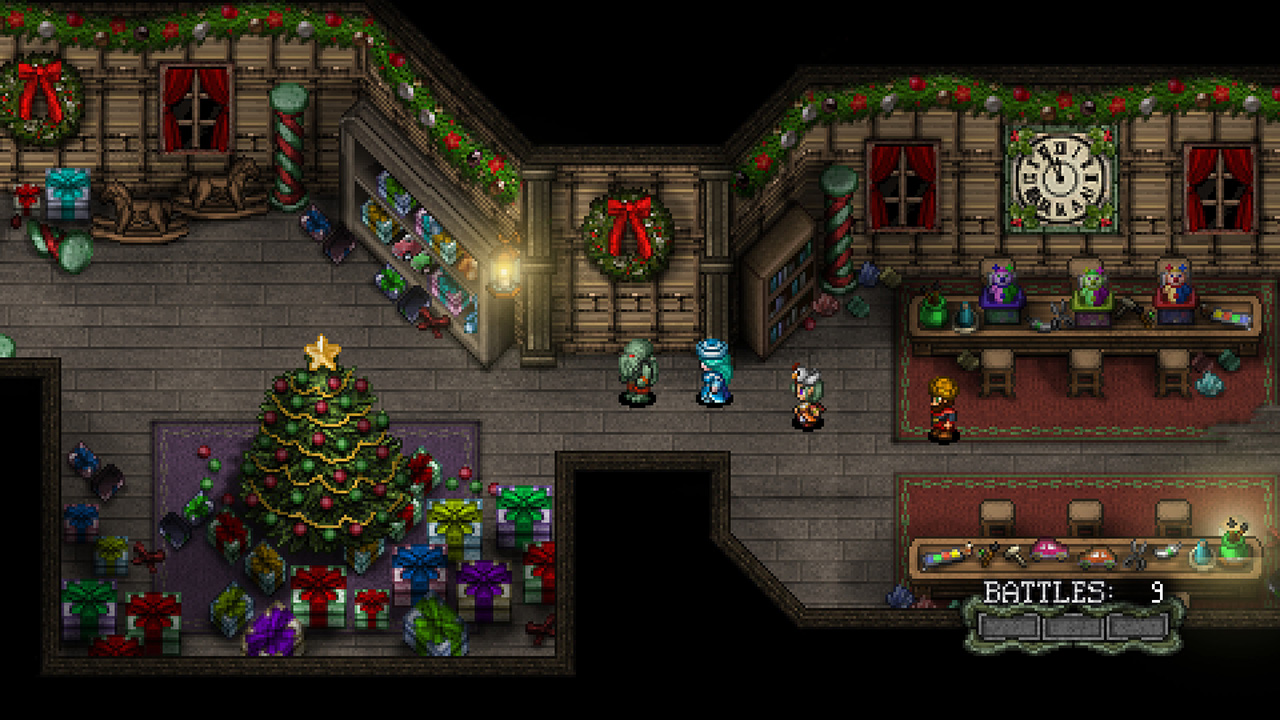 Zeboyd has never been a slouch when it comes to presentation, and Cthulhu Saves Christmas is no different. The pixel art is well done, including some nice character animations and environmental bonuses, such as lighting and weather effects. The static, almost storybook-like slides in-town feel a bit out of place with how animated everything else is, but are acceptable nonetheless. The music is a bit hit or miss, however, with pieces such as the battle theme being really invigorating while other sections feel a bit misrepresented. Either way, the game sounds and looks good for the most part.

Cthulhu Saves Christmas, so far, is not the game I expected it to be, but it isn’t bad either. While the return of the tentacle monster is great in itself, I would have waited a bit longer if it meant we had a more fleshed out world to explore. For now, it seems like it is not a bad way to spend a few dollars this holiday season, but don’t expect it to blow you away, either. I’ll be sure to report back when I am able to complete the game — who knows, maybe the tide will shift more in its favor by then.