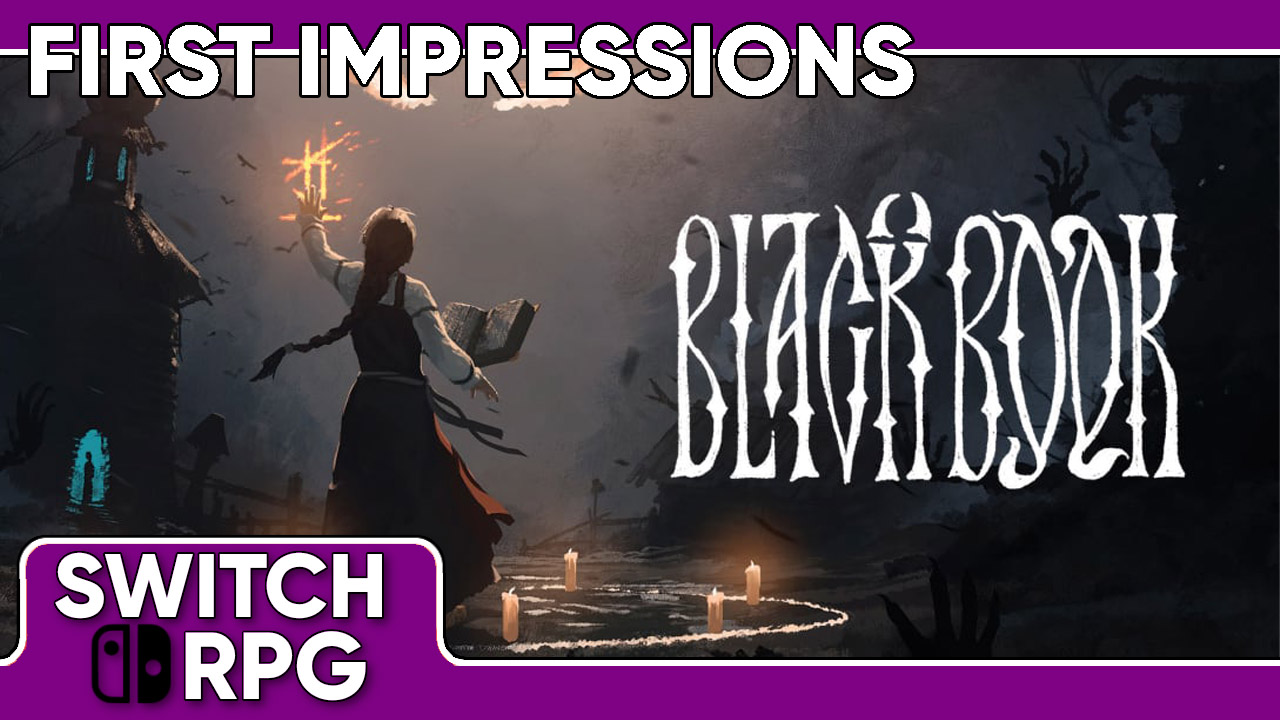 Card-based RPGs are the cat’s meow nowadays, but it is rare that we see deck-building mechanics blended with long-form narratives. Games like Slay the Spire and Neoverse are all-gameplay, no-narrative, but there are both retro and recent titles that focus on strong storytelling and card-based mechanics. Titles like Baten Kaitos, Children of Zodiarcs, and SteamWorld Quest feature characters with specific play-styles that are focused on team-building and deck synergy, but also offer engaging narratives and arcs for their party members. While Black Book doesn’t offer customization and party management on the same level, there is plenty to love about this rogue-ish, deck-building title. Does it promote its marketed addictive combat and compelling narrative? Read on and find out.

Black Book follows Vasilisa, a young woman whose lover dies under mysterious circumstances. As this is a wonderful world of fantasy, she is coerced into the family business by her grandfather, Egor, and becomes a witch. Vasilisa is determined to save her lover’s soul and breaks the first seal of the eponymous Black Book, an artifact that can grant its owner any one wish, if they should open all seven of its seals. She is pressed for time, however, as her lover’s soul will ascend to heaven after forty days. You have that amount of time to break the seals, but the journey will require research, riddles, and cooperation with a number of locals.

Black Book combines the depth and breadth of text found in many visual novels and the tactical, measured deck-based combat and leveling systems of an RPG. You’ll use the Black Book to cast spells using a precise system involving combining certain kinds and colors of cards. While you will only be able to craft spells of limited power using the cards available, you can expand and improve your deck by either drafting rewards from combat or crafting your own at your grandfather Egor’s house at the start of each night. Cards have unique abilities and synergies with one another, and the game balances its chapters by unlocking new sets of playable cards with each broken seal. The spell crafting is an extremely enjoyable feature with a great deal of variety, and while it doesn’t reach the heights of some other deck-based systems, it is well-worth the time and thought required to make terrifying deck builds. Although Black Book’s map system might seem similar to that of Slay the Spire, you have a much more limited set of options available at the start of each night. By speaking with visiting locals before each expedition, you can open up alternate paths and objectives for the evening, but these are few in number and their rewards aren’t highly substantial. You’ll need to hit each location on the path to your objective, and while many can feature combat scenarios, there are some that are simply intelligence, health, and/or morality checks.

Every choice you make on your journey will compound on one another, as small decisions like investigating an open grave can yield beneficial artifacts, but come with the cost of sin, which can affect the outcome of your overall playthrough. You’ll have the opportunity to recruit chorts, a specific subset of demons, but you’ll need to put them to work performing tasks that will raise your sin and reward you with money. If you try to carve a virtuous path, you’ll need to either keep your chorts occupied with meaningless tasks or keep them at your side, but demons need to work, and will torture you with various debuffs you’ll need to circumvent with careful planning.

Black Book offers a glimpse into slavic culture, vocabulary, and quality of life, and you’ll quickly realize that the world is not as black and white as the cards you’ll be using. Witches are recruited to bless crops, curse neighbors, and sow all sorts of mayhem by the local population, which means the death of Vasilisa’s lover may have more nuance and complications than it appears. You’ll need to decide whether you will make Vasilisa an agent of chaos, order, or opportunism throughout your playthrough, but your choices do matter, and will result in opportunities for further discord or harmony. Black Book largely takes place at night, which results in a game that is dark in a variety of ways. While the voice acting is a bit of a mixed bag and the character portraits and 3D models are efficiently simplistic, the most problematic element of the aesthetics is the text visibility. Many lines of dialogue are voice-acted, but new locations are accompanied by flavor text and cards feature their own descriptions that can be difficult to read on a television screen. While this problem can be mitigated by playing in handheld mode, Black Book is taxing on the Switch and can cause your battery to drain quickly. Another point of ire can be the control stick sensitivity, which will rapidly skip over menu options in some cases and snap to interactive points with little breathing space in environments at others. There are no sensitivity options available in the game itself, and during moments of frustration, it feels evident that the title was made for mouse and keyboard play. I shudder to think of how harrowing Black Book would be when playing with Joy-Con drift.

Despite its few flaws, Black Book offers an impressively lengthy campaign, packed with narrative twists, copious amounts of lore logs, and satisfying combat. It is a slow-paced game due to the amount of text featured, but it results in an authentic and aesthetic experience that feels well-worth its entry price. Keep your eyes peeled for our full review of the title in the near future.