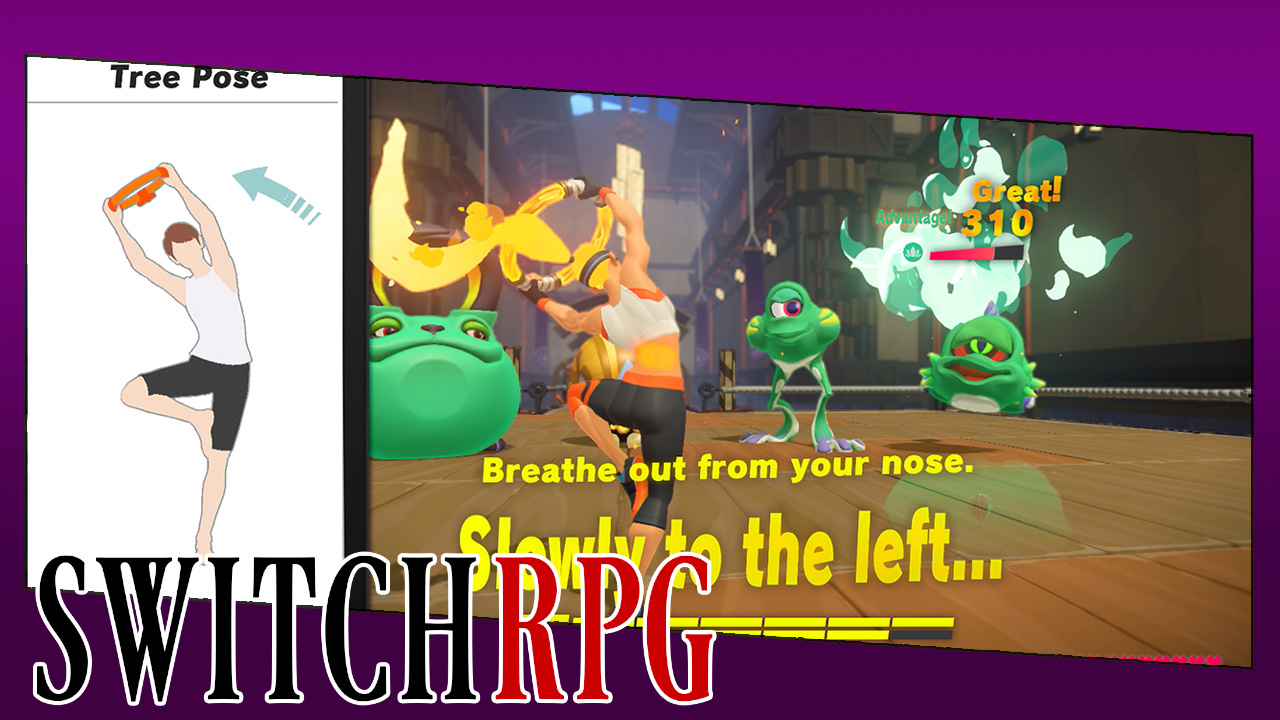 Over the past two months, I’ve been working up a sweat in Nintendo’s bizarre peripheral-based RPG, Ring Fit Adventure. Marketed as a full-fledged fitness role-playing game, Ring Fit places its focus on utilizing workout exercises as attacks. But does it offer the sort of grind that fans of the genre might find addicting, or even satisfying? It’s a tough answer, but the experience gains that I’ve generated over the course of these two months have taught me a great deal about this title. Maybe I can’t answer whether or not this will be the game for you, but I can tell you about what to expect from this wild jogging adventure.

In terms of narrative, Ring Fit is relatively light on lore. The Ring Con is a mystical golden device in-game, a creature with its own intelligence- that just so happened to be containing the trapped spirit of Dragaux, a ripped dragon with a bone to pick with the rest of the realm after a long time of imprisonment. Dragaux is under the spell of the Dark Influence, a purple energy that generally makes people rotten. Although Dragaux the primary antagonist, his Influence soon starts to spread to other characters throughout the world- specifically, the Four Masters: Allegra, Abdonis, Armando, and Mother Adma, each representing one of the four Fitness Skill colors. Your voiceless jogger protagonist will take up the Ring in order to teach Dragaux about the power of gains. Or something. 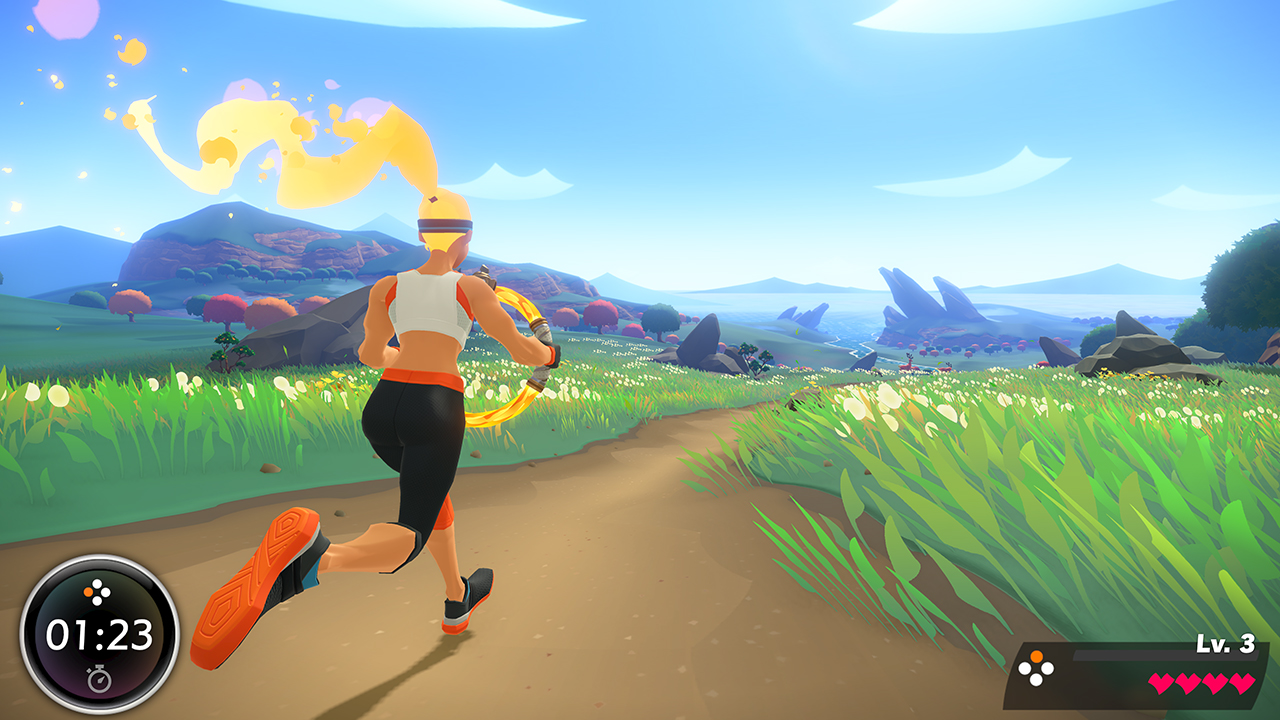 The narrative that plays out is one of puns and nonsensical explanations for why certain mechanics exist on the world map- one chapter will have you joining the ranks of the “Sportans” as they train to take on Dragaux, while another tasks players with taking a “shortcut” on the world map thanks to the “help” of an innocent NPC. While it does feel as if the narrative has little impact upon the progression of certain stages, there are some instances where the player will uncover a skill for the Fitness Ring that “opens up” a new avenue to explore- in the Sportan chapter, for example, you’ll gain the ability to kayak over bodies of water, while later on, you’ll unlock a double jump that allows you to climb to new heights. The latter example is one that will cause routes with previously-inaccessible branching paths to be explored, however- the kayak is a mandatory function of level design. All-in-all, the character interactions are cute, yet weightless, with the only truly delightful banter coming from Dragaux himself, who is just the most delightful asshole.

Things are much more engaging on the gameplay side, literally and figuratively. While you trek through stages, you’ll come across enemy encounters and enter into turn-based combat. Each attack at your disposal is called a Fitness Skill, and they come in four color variations: blue for leg-based, aerobic skills, red for arm and upper-body skills, yellow for ab and core-based skills, and green for stamina and yoga-based skills. Enemies are color-coded, meaning that attacks of a certain color will deal additional damage to them. While you don’t get a glimpse at enemies until you engage them in combat, each stage will often feature a “recommendation” as to what kinds of skills you should bring along with you. Early on in your travels, you’ll have a sparing amount of Fitness Skills, and since they operate on turn cooldowns, you won’t always have the opportunity to hit an enemy with a corresponding color. Simply put, there are very few instances during which you’ll defeat your foes in a single turn, and enemy attacks will whittle down your health- even if you are required to block every attack with an ab-based Fitness Skill. This is where the equipment and item systems come in: you can boost the power of certain color Fitness Skills by wearing similarly-colored articles of clothing, or by consuming smoothies for a temporary boost. There are even some unique smoothie recipes that can change the color of your Fitness Skills, boost stats, and increase enemy drops. Equipment and smoothie ingredients are purchased from the adorable couple running the item store in-town, but each individual piece of clothing and bundle of smoothie materials will cost you a pretty penny. Fortunately, you can save all your cash for equipment, as you’ll receive plenty of smoothie ingredients simply by paying close attention and vacuuming up materials that appear during courses. 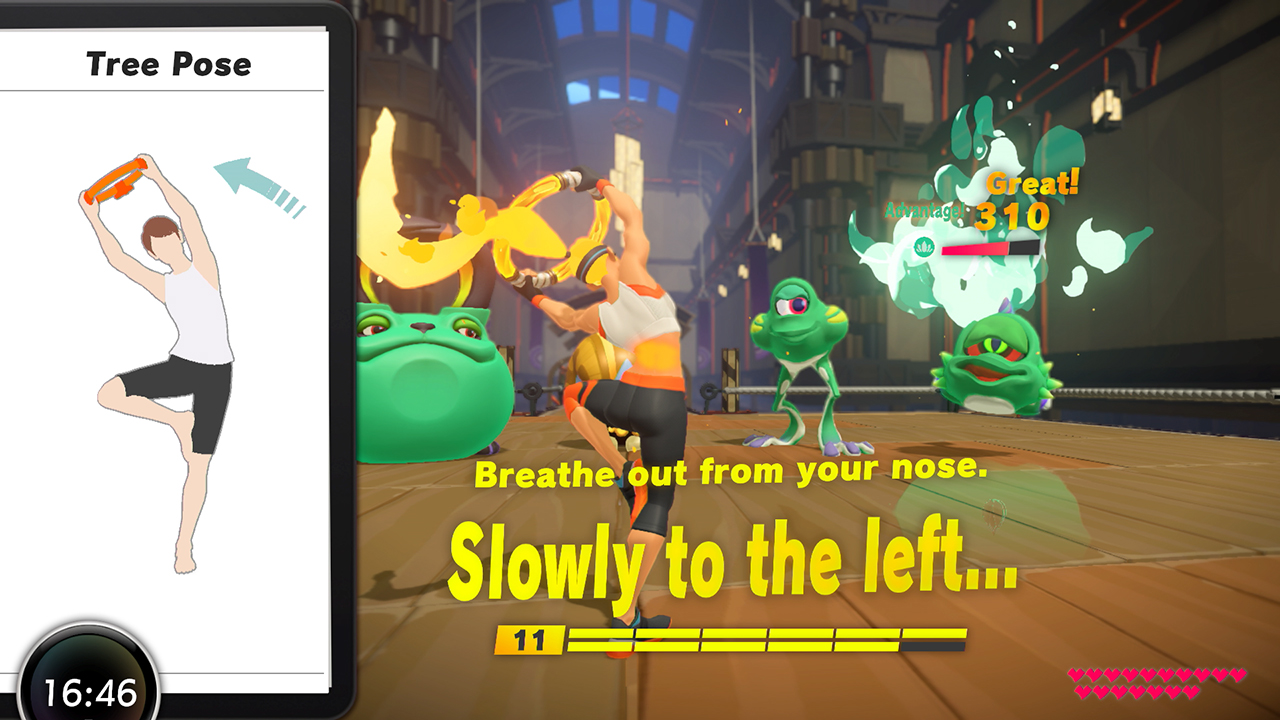 In terms of being an RPG experience, Ring Fit Adventure’s battles certainly fit the bill, even if the rest of its gameplay doesn’t manage to evoke the same feel. Many courses are reskins or expansions upon a series of templates established early on in the game, and though their obstacles do become more complex the further into the story you go, they feel more like infinite runner or platforming courses than environments in an RPG. Once you get the double jump, you can use it to avoid enemy encounters, further exemplifying this point. The most surprisingly RPG-like features of the game are the skill tree that opens up after a substantial amount of playtime as well as its side-quest system. The former grants skill points upon each level-up that can be used to juice-up stats, create follow-up attack chances, and boost the attack power of previously-weaker Fitness Skills. Some of these upgrades cost more than one skill point, meaning you’ll need to invest multiple levels in order to boost them. The side-quest system opens up in towns, where random NPC portraits will task the player with getting a specific score in a minigame, re-running a course with a very specific objective in mind, or gathering the materials to craft a specific kind of smoothie. They promote playing the game in a different way, which is definitely unexpected, but fun.

Still, this doesn’t exactly answer the question this article’s title asks. Ring Fit is relatively free of grind, only requiring about one or two additional course runs in order to boost your level beyond the suggested amount- but the game does alter its difficulty on the fly, allowing you to boost or lower your personal effort level at the beginning of every workout. There’s not much exploration or narration to focus on, but when you’re working up a sweat with some of its more brutal exercises, those elements are the last thing that might be on your mind. While it has all the bells and whistles of an RPG, it is meant to show the greatest similarities based to concept: running through the motions again and again, raising your own level of challenge, in order to receive incremental gains. Though you won’t feel as powerful as your in-game avatar after you’ve increased their level into the seventies, Ring Fit continues to challenge due to the unrelenting nature of its physical exercises, and the variations upon them that the game introduces as you “grow” more powerful. If you are an RPG fan, perhaps the illusion of equal effort taking place as you and your avatar push yourselves in combat will be enough, but Ring Fit Adventure isn’t an RPG- it’s a workout tool that uses much of the same language to communicate its fitness goals. Any game that gets you up and off your feet in a satisfying way is well-worth the effort, however, and for that, I would give this title a hearty, healthy, sweaty recommendation.

I just received this as a gift. Another way to keep active during the colder months!