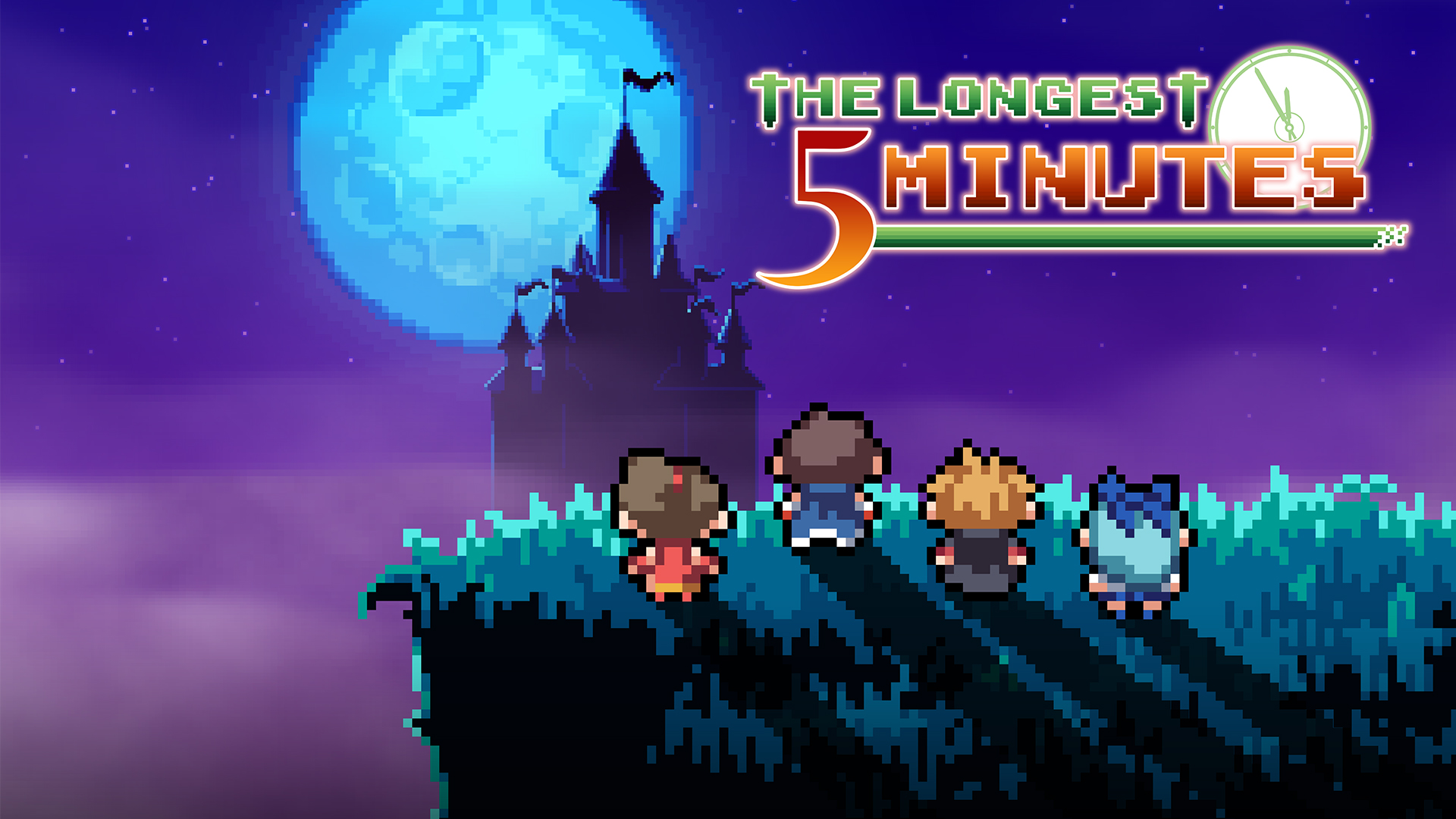 Role-playing games, more than any other genre, have the power to evolve our understanding of the world. The confluence of sweeping stories, time taken to explore characters and their relationships, and the simple aspect of inserting oneself into a story all come together to have a profound impact on one’s mind. Not every RPG succeeds in this. Not every RPG is meant to. But there are those games out there that, for whatever reason, resonate with us on an emotional and philosophical level, sticking in our minds long after we’ve put the controller down. You may go years between playing new games that have this effect on you, but when one appears, you come out the other side with a deeper understanding of the human condition. The game doesn’t just affect you. It helps reshape your worldview. It becomes part of who you are.

For me, this holiday season brought a new game into this prestigious fold. Playing through this quirky, imperfect little title, I slowly came to realize that I had stumbled upon something special. Even now, many weeks after completing the game, I still find myself thinking about it almost daily. The game seems to have transcended other metrics of quality, imprinting its story, characters, and central message in my mind in a way that no RPG has in years. 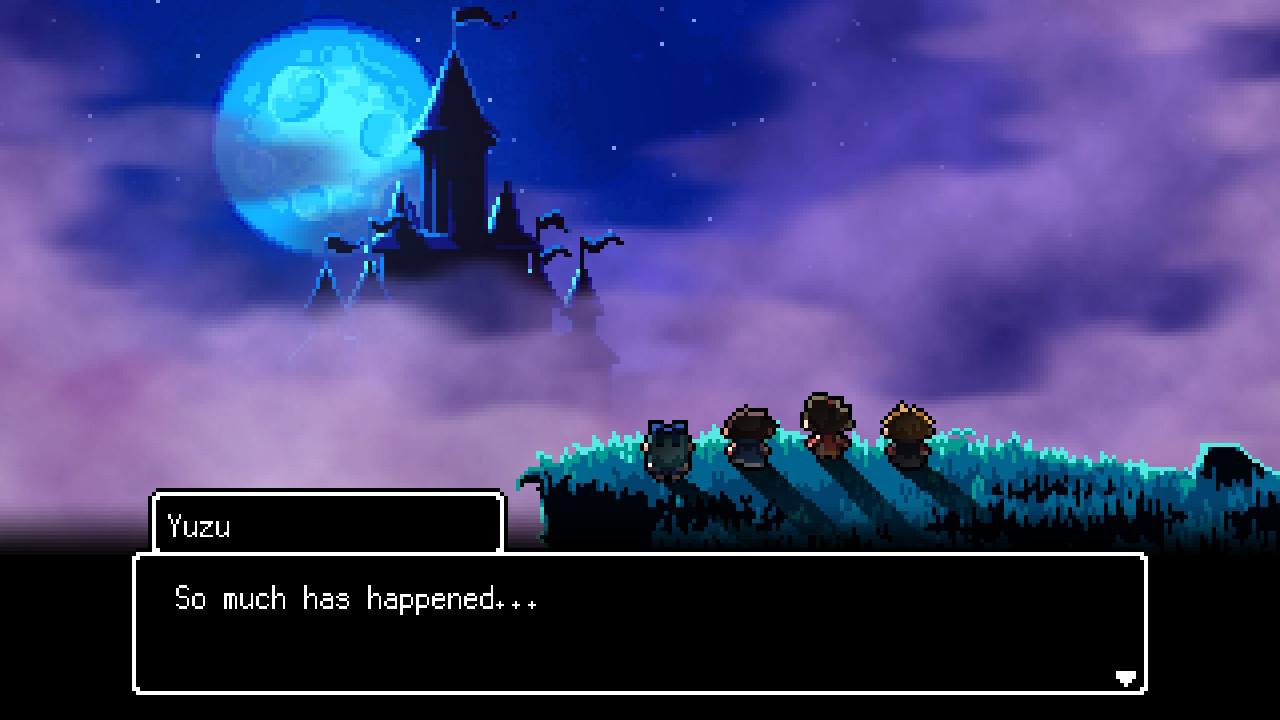 At face value, The Longest Five Minutes is a fairly straightforward JRPG, with its own little subversive twist on the tropes of the genre. The main character, Flash, awakens to find himself standing before the Demon King – the final boss of a grand hero’s journey – with no memory of how he came to be there. With the help of his loyal companions, Flash’s mind bounces back and forth between past and present, as he slowly recalls the details of his quest, remembering not only his adventures, but the relationships he has with his various comrades. The story is told semi-linearly, with the majority of the plot told in sequence, but a good many chapters told out of order when something in the battle with the demon king awakens a new memory.

Ben Thompson wrote a great review for The Longest Five Minutes for SwitchRPG, where he praises the game’s storytelling and characters, but notes some weaknesses in its combat system. While I found the game’s stripped down mechanics more palatable than our official review, there’s no denying that combat is the weakest part of the game. The game is easy, no way around it. But for me, the central draw of an RPG is its story, and the story of the Longest Five Minutes is one that continues to echo in my mind on a daily basis.

All of this is, of course, wrapped up in a bright and charming package. Character sprites are cartoony and expressive, and the world is filled with colorful characters, wonderfully drawn enemies, and genuinely funny (if sometimes cheesy) dialogue. 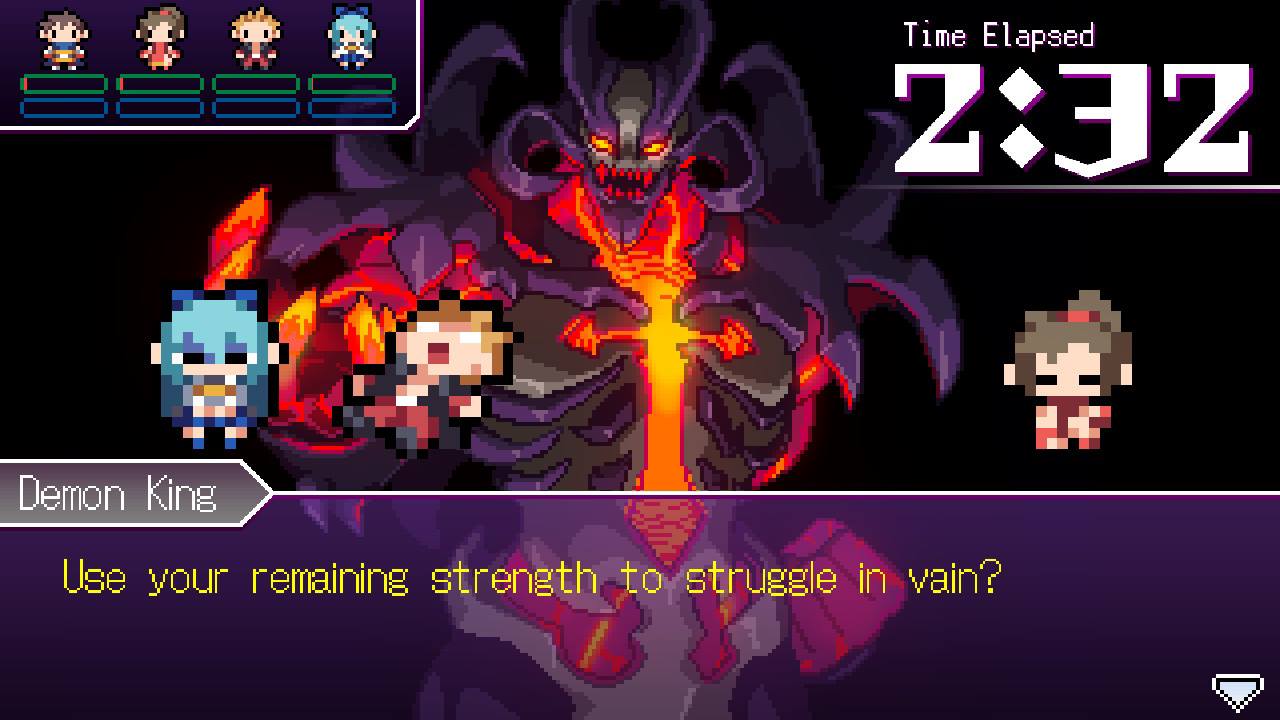 One of the better parts of The Longest Five Minutes’ story, which feeds directly back into its gameplay, is the way you unlock memories. Throughout the battle with the Demon King, the player is given dialogue choices that affect how Flash deals with this encounter. He may choose to attack the demon king, evade, encourage one party memory to unleash an ultimate ability, stand in defiance of certain defeat, or even give into despair.

The story isn’t afraid to go to dark places. Without spoiling anything, some of the choices the player can make will unlock “in the present” memories, where you can see the dire consequences of the player’s decision to acquiesce to the demon king’s commands. These memories can be both heartbreaking and visceral, defying the cheery and colorful disposition most of the game presents on the surface.

On the flip side, of course, are choices you can make in memories that directly affect how the battle goes with the Demon King. Several late game memories have choices that drastically change your understanding of the adventure so far, and leave hints to the game’s final ending.

Whichever way you slice it, The Longest Five Minutes does an excellent job of showing how our choices, large and small, have rippling effects through our lives. It shows no fear in staring into the darkness within all of us and showing us what is lurking underneath – displaying a boldness not seen in other RPGs. But it also consistently provides opportunities for the opposite trope, one of hope shining the darkness, to stand front and center. This dichotomy between the darkness and the light is perhaps the central theme of the entire story, one that is underlined all the more effectively by the game’s willingness to show us both sides of the coin.

The Line Between Light and Shadow 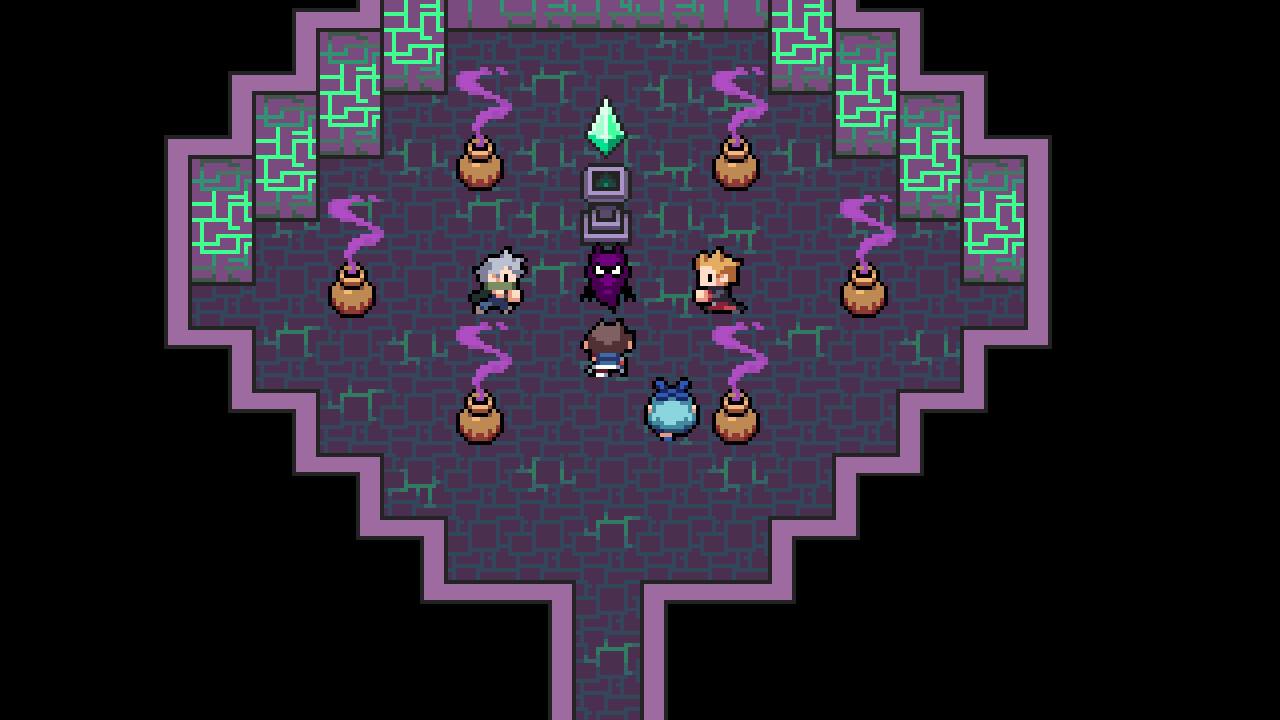 The Longest Five Minutes takes a major turn in the final hours of the game, unveiling a series of new memories that further highlight this theme of light and darkness. In the final phases of the fight with the Demon King, Flash uncovers truths that change his perspective on his entire adventure up until that point. He begins to see how the calling of a hero is shaped by his life experiences, by things remembered and forgotten, and by the relationships he has formed since childhood.

The old anime trope of “the power of friendship” is ever-present throughout the story, in all its cliched glory. But by the end of the game, this trope has been turned on its head, taken apart, and reconstructed, not unlike Flash’s own memories. Once again, the story doesn’t shy away from the darkness and shows no fear in being raw and honest about the consequences of even the most well-intentioned of actions. Through it all, the player sees why this oft-maligned power of friendship is truly so important, no longer scoffing at the cliche, but understanding just why the bonds and connections between people really matter.

And On the Tangled Threads of Memory Go

This central idea – of how one’s life might be changed if they had made another choice, or had formed different relationships, or had remembered something forgotten – continues to resonate with me weeks after completing the game. I don’t expect it to stop resonating with me months or years ahead. Orbiting around this central idea are other subplots and character threads, lessons about loving, growing, maturing, and choosing, that bring life and weight to this 20-hour RPG.

The Longest Five Minutes, for all its quirks and flaws, tells a story that speaks to some of the central questions every person carries around in their hearts. It does so with a beautiful combination of light-heartedness, emotional realism, and honesty. For that reason alone, it will likely stand as one of the crowning jewels in my RPG collection, and proof that video games can stand as true works of art.