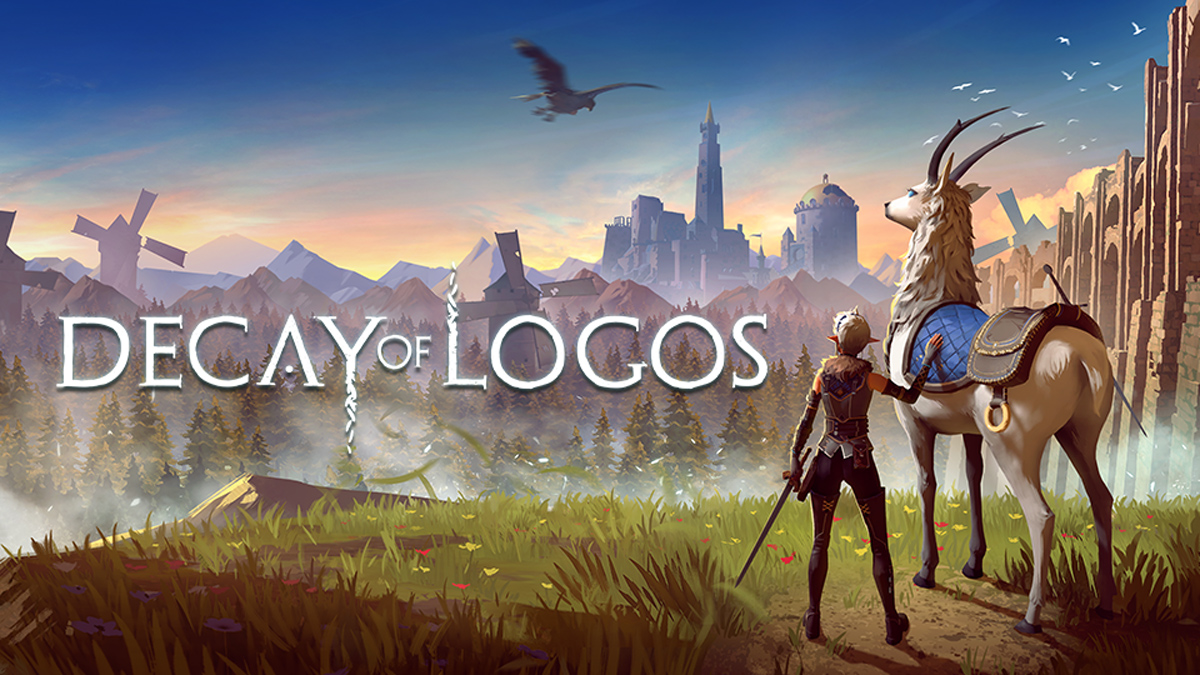 In case you haven’t heard, there’s a game out there known as Decay of Logos, and it’s been touted as a Dark Souls-like experience with an art style equivalent to Breath of the Wild. These are two very lofty claims, but what tops them is that developer Amplify Creations has managed to pull it off with a meager staff of four.

While Libra is a series normally offering a preview at up-and-coming titles, this one will be a bit different. We are waiting on the day-one patch for the Switch version that Amplify Creations has claimed will fix a number of the game’s seriously grievous technical issues before we release our own impressions. That being said, I’ve also played the game to completion and have a number of thoughts regarding the narrative, gameplay design, and potential future for this title, if its patch should be as thorough as the developers claim. I’d also like to take the opportunity to weigh in on some statements made by other reviewers, namely the claim that Decay of Logos has a great deal of potential. In my humble opinion, it does- but ONLY if all of the game’s technical issues are resolved. So if you’d like to hear some very thorough analysis of the absolute ideal version of Decay of Logos, read on.

Decay of Logos is an action-combat role-playing game that focuses on thorough exploration and environmental design coupled with brutally difficult battle mechanics. The game’s protagonist, Ada, is sent on a quest for vengeance after her village is razed by members of the royal military. Led towards the root of the problem by a mysterious white elk, Ada will need to equip herself properly and explore exhaustively in order to confront the royal bloodline responsible for her fury.

Though Decay of Logos does feature some impressively expanse locales, the game is not an open-world experience. There are objectives the player will need to complete in order to unlock certain areas, though these will come in various forms, from finding levers broken off of gate switches, to collecting the masks of an impish tribe of youths. This is where exploration becomes key, as the game’s environmental design offers plenty of nooks and crannies to search for said items, with almost every opportunity leading to some sort of reward. Treasure chests will usually contain weaponry, though there are a few exceptions, and enemies offer a number of risk and reward scenarios. On one hand, fighting an enemy will likely ensure a slight loss of health, which might turn severe if you don’t find a safe route back to one of the game’s many save points. On the other, you’ll always gain experience from taking enemies out, and there’s a high chance you’ll receive a drop in the form of equipment or a potion. If you choose to avoid combat, however, you’re in for a terrible fate- a narrow miss might still catch the attention of a mob, and all of them will hunt you down until the bitter end rather than let you live. The game gives the player access to light and heavy strikes, as well as a parry move when wielding a two-handed weapon or a one-handed weapon without a shield. There is a quickstep feature while locked onto an enemy that can be chained into a unique attack animation. The general means of approach involves baiting an enemy to attack and striking back during their recovery animation, though faster weapons will lock them into continuous stagger animations. Strafing around an enemy is an extremely viable tactic, but it sometimes only works for a specific direction, with certain early game enemies actually discouraging this behavior. Fighting more than one enemy at a time can be overwhelming, though not impossible- in fact, taking out more than one enemy at a time is one of the most thrilling and tense aspects of Decay of Logos.

Some reviewers have claimed that Decay of Logos lacks enemy variety, but that’s hardly the case. In fact, the number of enemy types on display is actually rather impressive, though they are usually limited to a single of the game’s three major biomes. Still, there are a number of unique encounters to be found in Decay of Logos, and even more fascinating examples can be found should the player wish to comb the furthest reaches of the kingdom. Though the tussles with its titanic Ancestral Brutes are always epic, several other giant-sized enemies can be encountered, as well as the Darknut-esque Royal Guard scattered throughout the land. In the most extreme cases, areas with relatively fewer enemy types usually have a context-based explanation behind them.

And if there’s one thing that Decay of Logos shines at, it is the micro- and overarching narratives constructed in each of its biomes. To give away the narrative beats of its four-major boss encounters would do the game a disservice, as it is the player’s job to seek out the strange echo memoirs scattered throughout the environments. These echo shards are the records kept by key denizens of the realm, and reading them in order once collected often paints a grisly picture. For all of the game’s enemy types, there are deeply contextual meanings for their appearance and presence, and they’re all similarly deeply unsettling. Carving your way through sluggish dryads and wearing their armor takes on a new meaning when their nature (no pun intended) is revealed, as are the feral children you’ll need to strike down in one of the game’s more brutal dungeon-like areas. Likewise, the boss encounters are all immensely unique, offering a culmination of the echo narratives and showing how corrupt Decay of Logos’ world truly is. These final tussles serve as narrative-gut punches, with the game refusing to relinquish even in its final moments. Though each of these narratives feels as if it unfolds separately from one another, they all culminate with Ada’s own journey, and the reason behind the game’s title.

As stated prior, exploration forces players to carefully balance their available resources and overall survival potential with their understanding of the harsh terrain. The game will often punish players who aren’t careful, and its sparingly-placed save stations can result in compounding failure and frustration. When Ada takes damage, she becomes more worn out, and though she can regain her strength somewhat at save shrines, she will suffer a stat penalty until she rests at a campsite. Though the world of Decay of Logos is no Hyrule, it is still impressively large, and players might struggle with returning to the areas they were exploring after getting booted back to their last save point. Because equipment breaks and stats lower, players are forced to consider the limitations of their inventory, as well, something mitigated slightly by Ada’s elk companion. The creature can store an additional set of equipment and weaponry, but not duplicates of any of these. This rarely becomes a huge problem, but it can be aggravating when there are multiple weapon types and limited slots on both Ada and her elk. Though there is a item storage system found scattered around the world, these are also placed in very obtuse locations, which can be annoying to access after discovering a cache of goods. 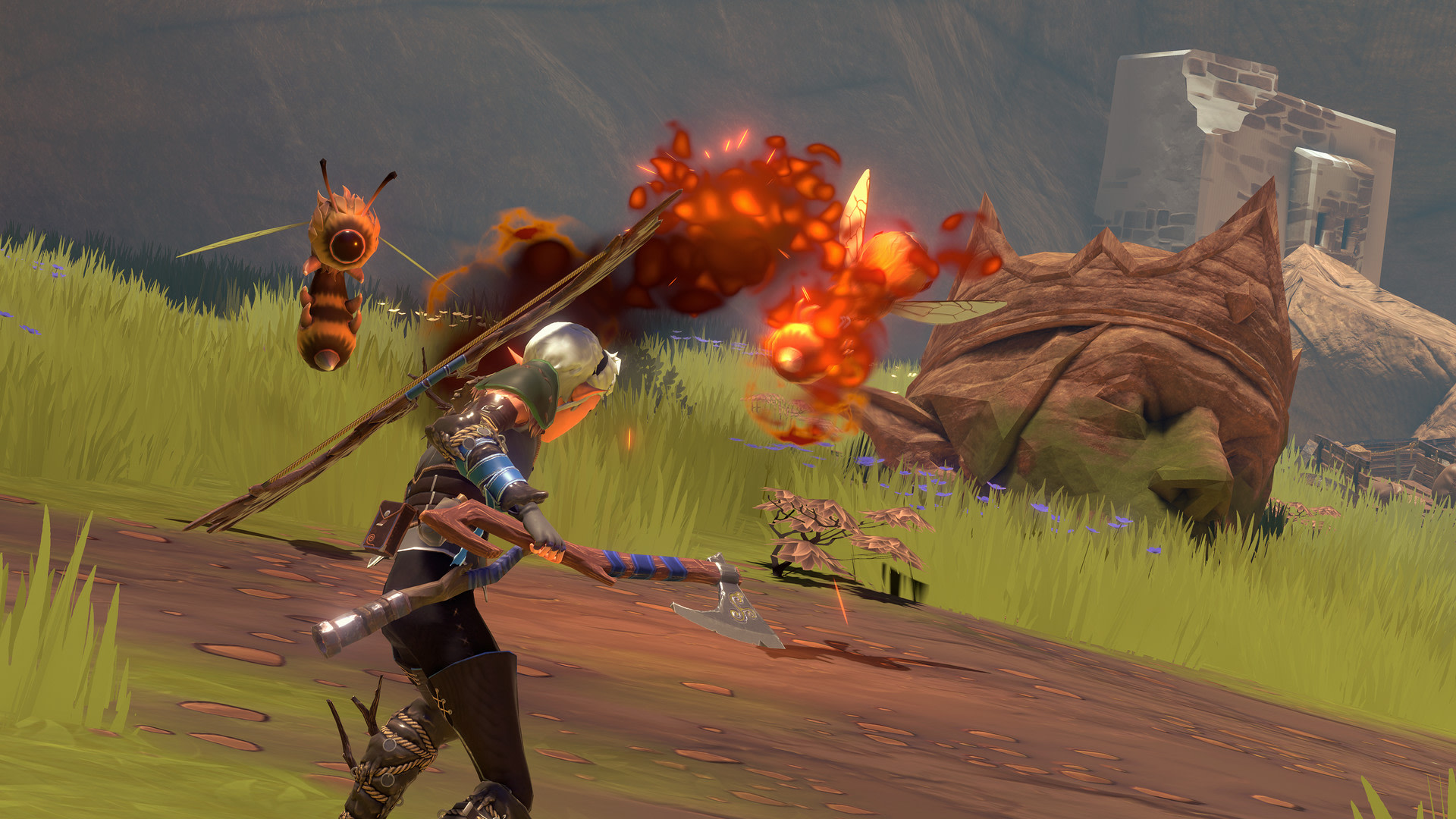 Of course, this is all an analysis of the game in its ideal state, which currently does not exist. Even if it did, there are still some legitimate qualms to be had regarding the title. For one, the elk’s riding controls are absolutely terrible. The closest equivalent would likely be riding on horseback in Breath of the Wild, but even the slightest turn input will send the elk veering off into a wall. The creature will also move no faster than a trot unless in very open terrain, of which there is not a great deal, and said trot can easily be outpaced by Ada’s own sprint. The game offers the player a consumable item that allows them to quick teleport back to the central town area after the first act, but this device is, well, consumable, and in extremely rare reserve. Either having the device be permanent and only having one in the whole game or having it drop from enemies on occasion would be preferable to the scenario that currently exists. Speaking of consumable items, the paralysis and poison cures are laughably under-powered in the base game, though they become more viable in new game plus. One of the greatest crimes in Decay of Logos is that weapons and equipment laying around the game world will despawn upon death. If a player dropped a certain weapon in order to make room for another for any reason and ends up biting the dust, that chucked weapon is lost forever (or at least, until a new playthrough). The game features a low amount of bows with pitifully weak strength, but its limited ammo drops make focusing on this play style nearly impossible atop of its inaccessibility.

And then, of course, there are the looming technical issues. This is the point where we stop talking about the hypothetical, bug-free and ideal version of Decay of Logos and start talking about what does exist. I don’t quite understand the push to have a game out in the wild when it is in such a broken state, unless the studio itself was desperate for money. Either way, the game’s chugging framerate, frequent freezes, and other baffling soft locks severely impact the optimal play experience that Amplify would likely love to offer its audience. These issues exacerbate the aforementioned legitimate complaints, as freezes and input locks led to weapons that could have been recovered being lost forever, and odd save issues combining with compounding deaths and lost progress offering a frustrating experience. It is a truly sad scenario because of Decay of Logos’ incredible potential- if the game were running perfectly, even its list of minor complaints wouldn’t detract from what is a fascinating narrative, gorgeously-realized world, and harshly-designed combat system. If Decay of Logos performed optimally, I would say that it is without a doubt a must-play RPG for the system, and one of my favorite titles of the year, so far. Heck, I suffered through its technical issues because I enjoyed the experience so much, and I still think that the game was one of my favorites from a conceptual standpoint. This world and the gameplay mechanics it offers scream for a sequel or DLC expansion that further fleshes out its twisted, fairy tale scenario, and I’d gladly throw down the money to see either of those come to light. But it is ultimately up to Amplify Creations to submit the necessary fixes to make Decay of Logos the game worthy of the praise I have offered. If not, then this is most certainly a pass.