Publisher: Nintendo
Click here to view on the Nintendo eShop.

Nintendo surprised fans the world over yesterday by dropping a Nintendo Direct right in our laps, but they surprised RPG fans even more with a playable demo for the upcoming Bravely Default II. Before yesterday, the only information we had on the game was a quick cinematic trailer. Now, we have a vertical slice of the game at our fingertips.

Two key questions are on everyone’s minds as this demo arrives. First, will this game live up to the legacy of its predecessors, and second, will it learn from their mistakes? 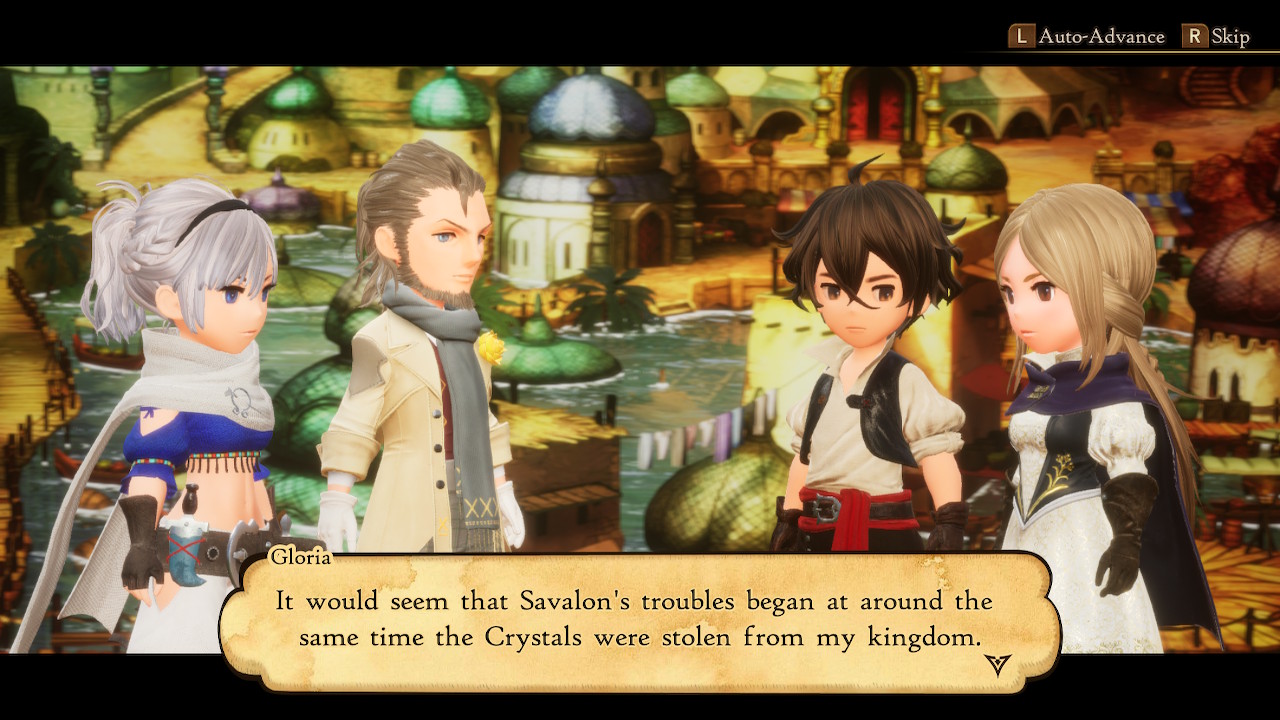 Fans of previous Bravely Default games should feel right at home with this sequel, as the art direction and graphic design has been faithfully recreated in the Unreal Engine. We’ve got the same chibi-headed characters, painterly cities, and scenic iconography we’re used to, but it’s all been upgraded to beautiful HD. Water ripples. Metal glistens. Tiny details abound to show that this world is more fully realized and visually striking than ever before. In battle, enemy models have what can only be described as a soft, gooey quality – fat rippling and bodies moving in a way that brings life to otherwise rote designs. Not every model has these traits, but those that do look great.

If anything ill can be said of the visual design, it’s that the game looks much better in motion than it does at a standstill. I took a ton of screenshots during my short playthrough, and a good number just weren’t usable due to blurriness or jagged edges. Ultimately, I think this comes down to a simple design choice – a dynamic camera that zooms in, zooms in, and focuses on specific details to mimic the human eye. This choice makes cutscenes a sight to behold, as the pre-boss battle cutscene will show. In motion, the game masterfully blends this dynamic camera with 2D textboxes to make the game feel like a storybook come to life.

I should take a moment to talk about the setting of the demo – the city of Savalon. Graphics aside, the city is strikingly designed and uniquely enchanting. Once a bustling desert town, the town’s limited waterways have been slowly rising for years. At first, the denizens viewed this change as a blessing, but as the waters have refused to recede, it has become a curse. Half the city now stands underwater. The game’s visuals capture this masterfully, as looking beneath the surface of water reveals stairways, buildings, and other artifacts from the submerged city. 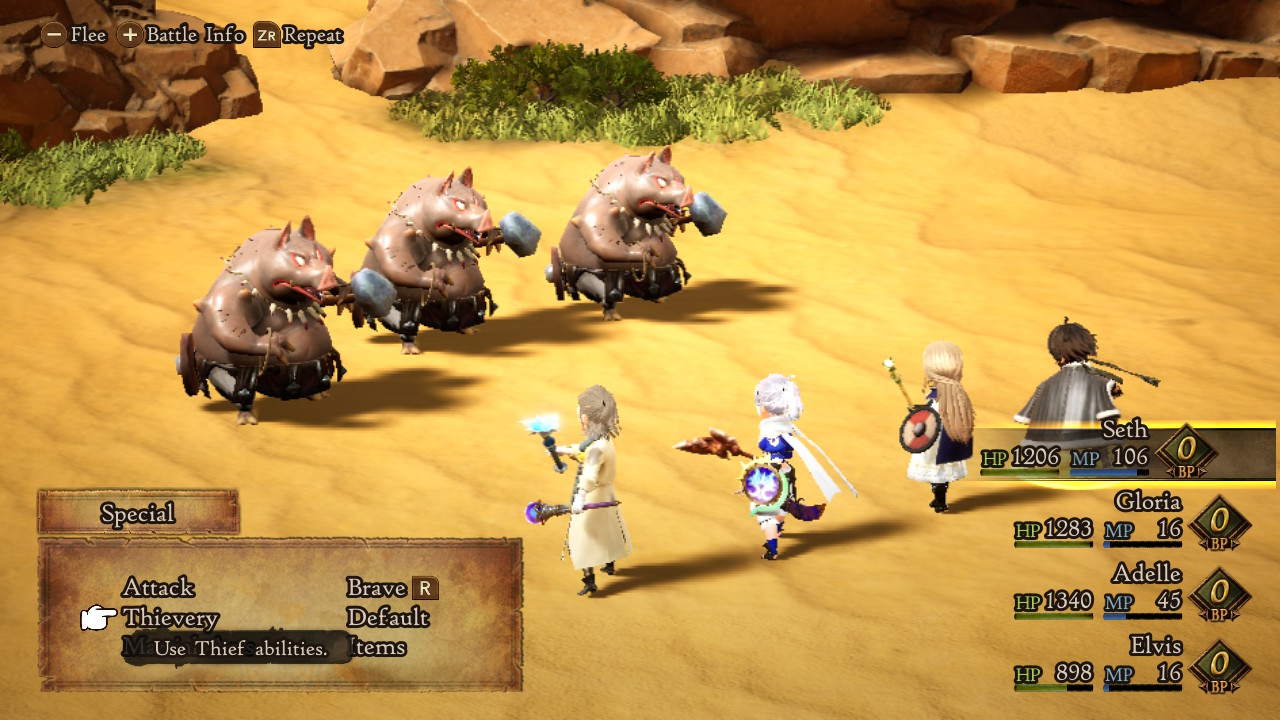 Bravely Default II uses the same familiar, turn-based battle system as previous titles in the series, with a few tweaks – some good, others bad. Your party will line up against a team of monsters, some 6-7 mobs deep. Monsters each have elemental and weapon weaknesses that can be exploited, and both the monsters and your party have access to the Brave system, one of the key selling points of the series. Every turn, your character receives one Brave point, which can be used to execute a single action. If you choose to defend, you can generate an additional Brave point to be used in future turns. By spending multiple Brave points, your character can take multiple actions per turn, dealing massive damage or setting up combinations of abilities to take down your foes. In addition, you can also put yourself in the negative, stocking up four actions in a turn, but then waiting the requisite turns to rebuild enough Brave points to act again.

Players must learn to use this system effectively to succeed. The monsters you encounter often hit hard and inflict crippling status effects, so knowing when you unload a huge number of attacks to end the battle is the key to victory. There is no penalty for ending a battle with a deficit of Brave points, so you should always put yourself in the red if it means ending things quickly.

Two new wrinkles in the battle system not present in previous games, come from both how turn order is executed and in the enemy A.I.. Taking the enemy A.I. first, the biggest change from the original game is that monsters are far more likely to manipulate the Brave system than they were before. It is not unusual for certain strong enemies to load up four powerful attacks in a single turn. This rarely, if ever, happened with non-boss characters in earlier titles, and creates a huge challenge that likely has contributed to the buzz around this demo being overly difficult.

For turn order, fans of Bravely Default and Bravely Second will find a critical change. The game has moved to an pseudo Active Time Battle (ATB) System. For the uninitiated, this means that instead of choosing all your character actions at once, then letting speed dictate who moves first, each characters turn will come up individually as their speed allows. I haven’t done enough tinkering with the system to know if it’s a true ATB System – meaning a speedy character might get more actions than slower ones overall – as the game offers no one-screen indication of whose turn is coming next. This presents a major flaw in the design (though not a game-breaking one), as it becomes harder to plan out strategies with no turn-order indicator or speed gauge to indicate who is coming next. 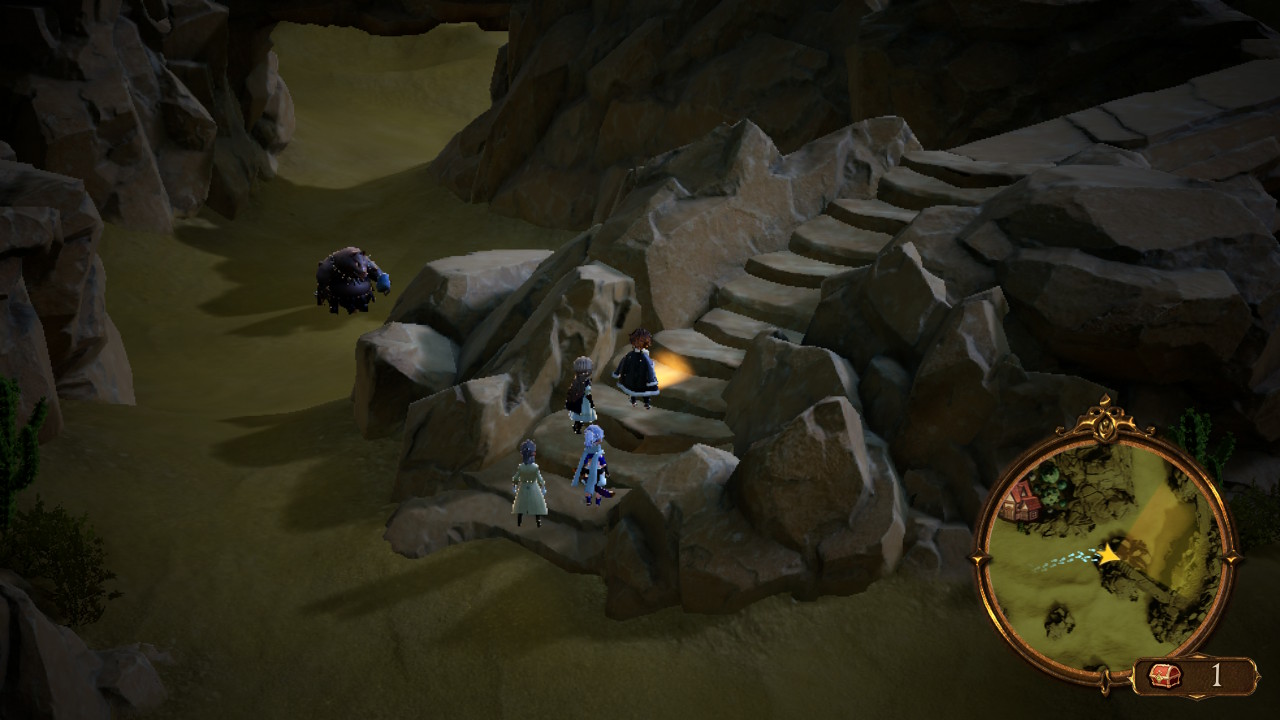 Big changes have come outside of battle, as well. The world map has changed, moving to an isometric view and showing enemies out in the field, rather than relying on random encounters. Players can now sneak up on enemies to gain an advantage, hit them with an in-field sword swipe, or get surprised by monsters themselves. Most mobs will chase the players if you catch their eye, although weaker monsters will actually run away if you are too far above their level.

This more interactive world map also includes some light exploration elements, as treasure chests are littered around, waiting to be discovered. While most will be placed in easy-to-reach places, there are at least one or two tucked away in hidden corners or in other crafty spots that require attention to detail to reach. Hopefully this change is further expanded in the full game, creating a whole world to discover and explore, rather than leaving players to just walk from Point A to Point B.

One area that hasn’t drastically changed in Bravely Default II is the class system. Like before, players equip job classes, learn active and passive abilities, equip secondary skills from another class, and slowly build an arsenal of abilities to mix and match to make powerful combinations. The demo offers four job classes out the gate – Vanguard (similar to the Knight from the first game), Black Mage, White Mage, and Monk. Mages now learn spells by leveling up rather than from shops, but outside of that, you’ll find these classes to be very similar to their precursors. By completing the main story of the demo, you’ll unlock an additional class to play with, as well.

I’m hopeful that the final game will not only match, but surpass the original games. In terms of presentation, Bravely Default II is an excellent step forward, and its gameplay seems poised – with the right tweaks – to also be an improvement. The only big question mark at this point, of course, is the story. The demo does not provide much beyond what has been revealed in the trailers, and while you get some sense of who these characters are, there’s still a lot left unsaid. Assuming the developers stick the landing, we may have another gem to add to the Nintendo Switch library.

I really liked the demo. I thought the aesthetics were fantastic, and of course the battle system was engaging and fun. As was the job system. All in all it makes me quite encouraged for the full game!