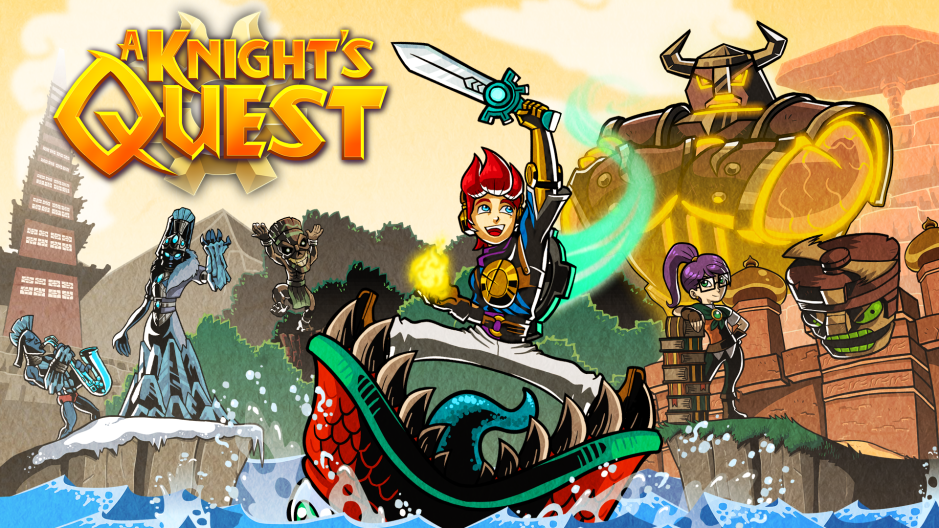 A Knight’s Quest is the latest from Sky 9 Games with the assistance from d3t and published by Curve Digital. From my 8-10 hrs with the game so far, it’s an RPG-lite action adventure game heavily inspired from the Legend of Zelda & Metroid Series.

A Knight’s Quest stars Rusty, the daring, clumsy adventure who has accidentally started a chain of events that might end with the destruction of the world. After the opening events, where Rusty triggers a giant purple crystal to appear in the sky, you are in the Port City of Regalia. Regalia is a vibrant open world, which Rusty must explore and conquer in order to prevent the threats from destroying his world. On his quest to save the world, Rusty will be helped by Valy, an interesting character, who explains to Rusty the purple crystal is generating Spirit Energy that will destroy the world, and therefore he must seek out the help of Spirit Knights. The Spirit Knights are elemental based, the first being Henry, the Spirit Knight of Wind. As you seek out these spirits, you’ll gain elemental abilities that aid Rusty on his quest. For example, once you have conquered the Spirit Knight of Wind, your awarded wind ability allows you to solve wind based puzzles by sending out a quick gust. In true metroidvania fashion, you can now access areas of the world previously gated off. In addition to solving puzzles, enemies you encounter in the world may now have armor, which can only be broken by first hitting them with the corresponding elemental attack.

As you venture on you gain new equipment and abilities, such as grinding boots- these reminded me of Sunset Override or Jet Set Radio. The combat is enjoyable, as you hack and slash enemies with your sword or fists, and the amount of exploration and combat has been well-balanced so far. I am about 8 hours into the game, and it’s a fair bit longer and deeper than I initially expected. I’ve had some difficulty with the map and mission objectives not being totally clear with where i need to go or what i need to do, and as a result, I’ve wasted some time walking around aimlessly until figuring out the puzzle or path i needed to take. There are side quests for Rusty to take on: some NPCs are looking for slimes, which can be traded in to upgrade your bag, one is looking for a cloak, and another would like you to mine a list of materials. There are golden keys spread throughout the world that you can collect, but I haven’t found a purpose for them yet. The only other issue I have experienced with the game is when traversing some of the platform sections, as the controls and camera aren’t as tight as I would like. As a result, I wouldn’t land the jump and needed to retry, which could definitely be frustrating for some. These minor issues aside, I am enjoying the characters, world, and story, which is presented with good visuals and nice audio.

Be on the lookout for my full review of A Knight’s Quest soon!

Hadn’t noticed this game before, but the mechanics you describe sound fun and the art looks great. Think I’m gonna pick this up while it’s on sale.