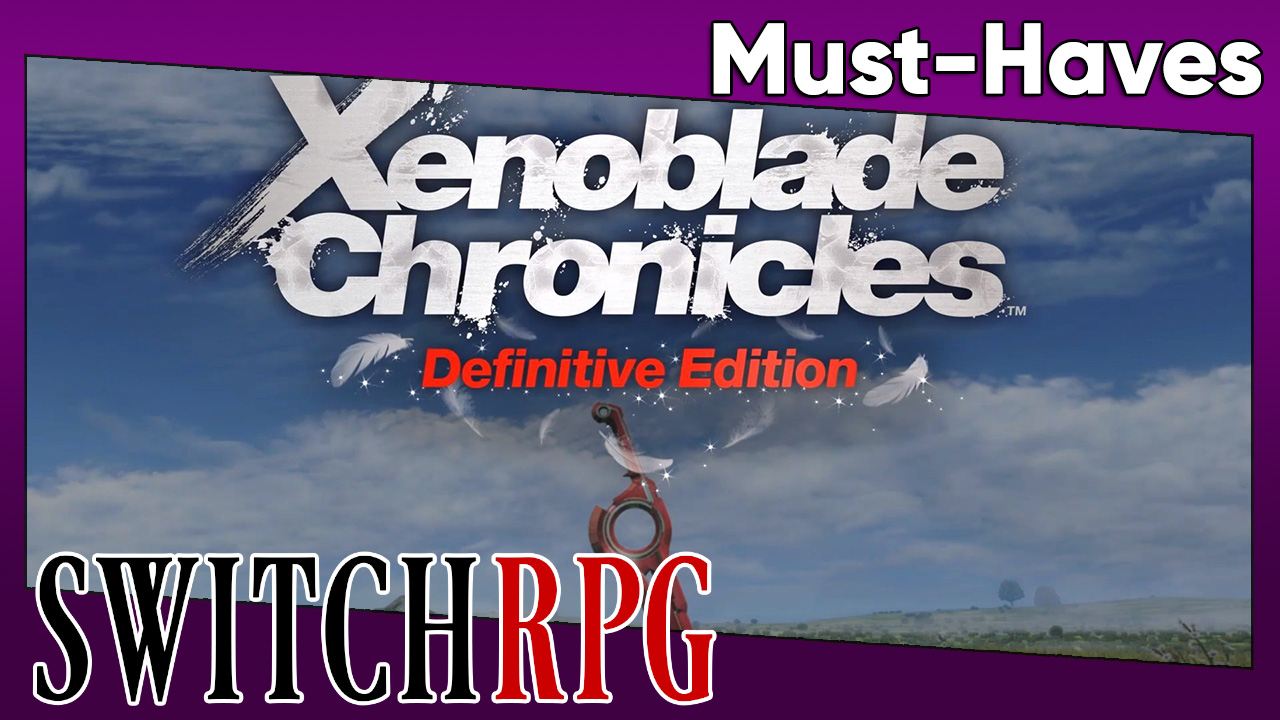 As the staff’s resident Xenoblade Chronicles fanatic, I have many spicy takes when it comes to this (current) trilogy. But if there’s one thing I can say, it’s that the original Xenoblade Chronicles exuded a charm and earnestness that made it a delightful and engrossing experience. The iconography of the eponymous weapon in additional its magnificent setting were truly something to behold, and I feel that its numbered sequel failed to deliver on ideas as magical as the brilliantly designed Monado and two dead gods of the original.

But at the same time, Xenoblade has been a series of incremental improvements, sometimes taking a step back in certain areas in order to refine or focus on others. In that way, some people who were newcomers with Xenoblade 2 might find the first Xenoblade a bit jarring. If this year’s Definitive Edition is going to truly be the version we all want to play, there are some changes that need to be made- or aspects that other installments did better- in order to make that the case.

With that in mind, here’s a list of five new features that I think would vastly improve the play experience, with the consideration that these are tame in nature. Asking for Xenoblade Chronicles to have the numbered sequel’s cancel system is unrealistic- man, would that be cool, but it’s unlikely to happen. Instead, I’m looking for some quality of life improvements as well as some additional content that could make help this 2009 Japan release stand toe-to-toe with contemporaries. Starting with: 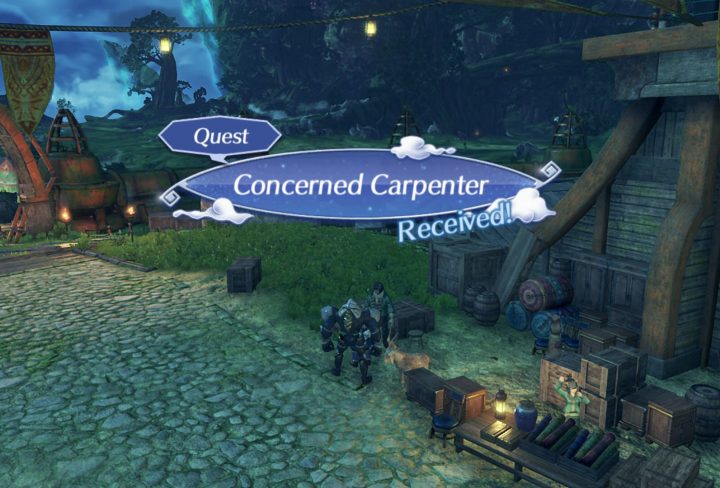 The original Xenoblade Chronicles was known for having its fetch-quests auto-complete upon gathering the proper materials, and having a truly staggering amount of quests in general- some of which were timed. What made completing some of these an absolute chore was the lack of quest markers. For example, if you were to meet back up with a certain NPC in order to keep the questline going, you’d have to intercept them at the right time and place.

While there was an indicator of their active hours and preferred location, they could be walking on their way to that spot, or wandering elsewhere in the vicinity, which meant you might not even be able to find your reward! Xenoblade Chronicles X featured a hexagonal grid that showed where a character would be at specific times, but Xenoblade Chronicles 2 took it one step further and implemented a quest radar system. One that wasn’t always helpful or accurate, mind you, but was at least an improvement over the listless wandering of the first game. 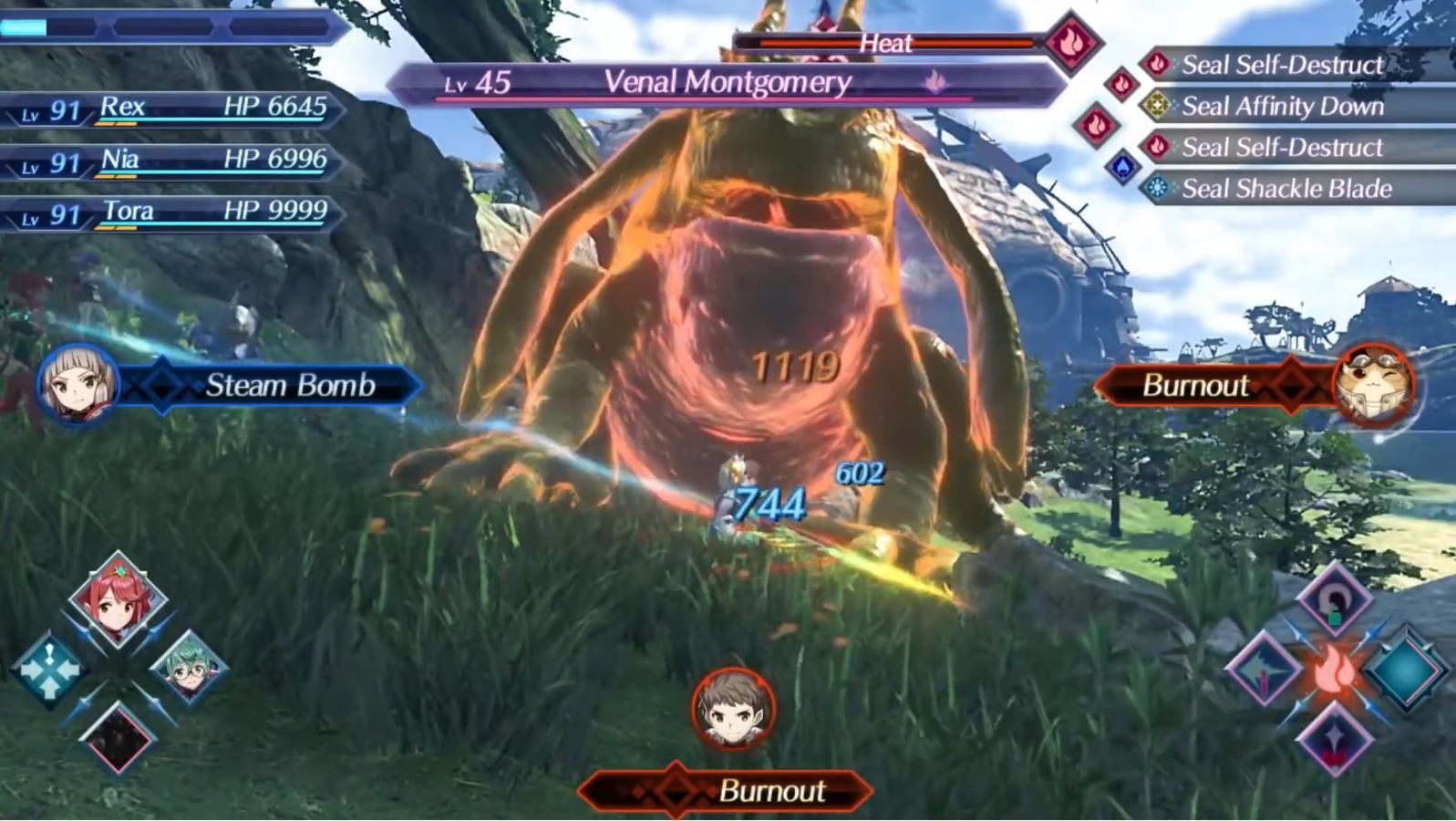 If you’ve ever looked at a battle screenshot in Xenoblade Chronicles 2 and wondered what the hell is happening, it might surprise you to hear that the original had it even worse. There were tons of status effects that, once inflicted, were cleared after a set amount of time.

Though the confirmation of their infliction would appear as lovely in-game text, Xenoblade Chronicles 2 also included a timer on the battle interface that would show how long the status would remain afflicting the enemy, at which point the player could attempt to stack additional effects atop that one. You can see this being displayed in the image above, confirming the elemental affliction on the character in the top-right section of the screen. In a game where you can break, topple, and daze creatures with multiple different Arts that can lead into other powerful abilities, having a degree of certainty as to when you can execute these abilities is a welcome update. 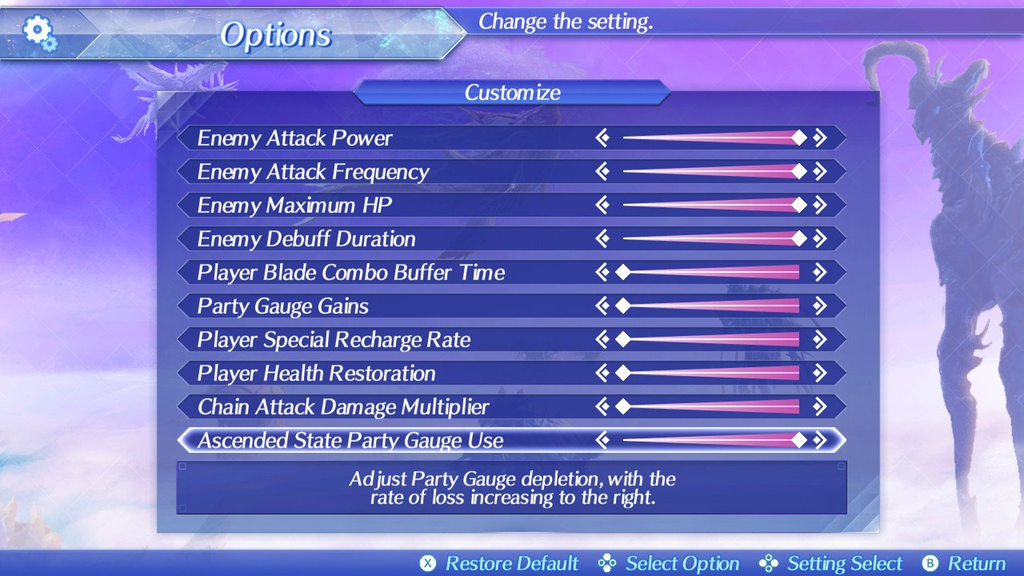 All Xenoblade games are known for their somewhat talkative battles, where characters will comment on their ability to execute certain attacks, current status infliction, or whether or not they’re actually feeling it. This is all well-and-good, but Xenoblade Chronicles 2 one-upped its predecessors with a variety of options when it came to audio and video- you could turn down sound effects, battle banter, and even encounter music if you wanted to do so. Sure, the resulting risk means that you may miss out on some cheeky lines, but to be honest, the less I have to hear Riki’s uncomfortably grating voice acting and attack names, the better. Sorry buddy, I still love you.

Additionally, Xenoblade Chronicles 2 patched in some difficulty and play experience options after launch, which were designed to lower the damage rates, attack frequency, and even Max HP of enemies throughout the game. Players could mix, match, and modify these options to their heart’s content, allowing them to play the game at their pace, rather than the developers’ own. In a time when difficulty in games and the ability to cheese your way through engagements is considered an impediment to full enjoyment of a product, these sliders allow a compromise for those with an interest in story just as much as the hardcore nut. 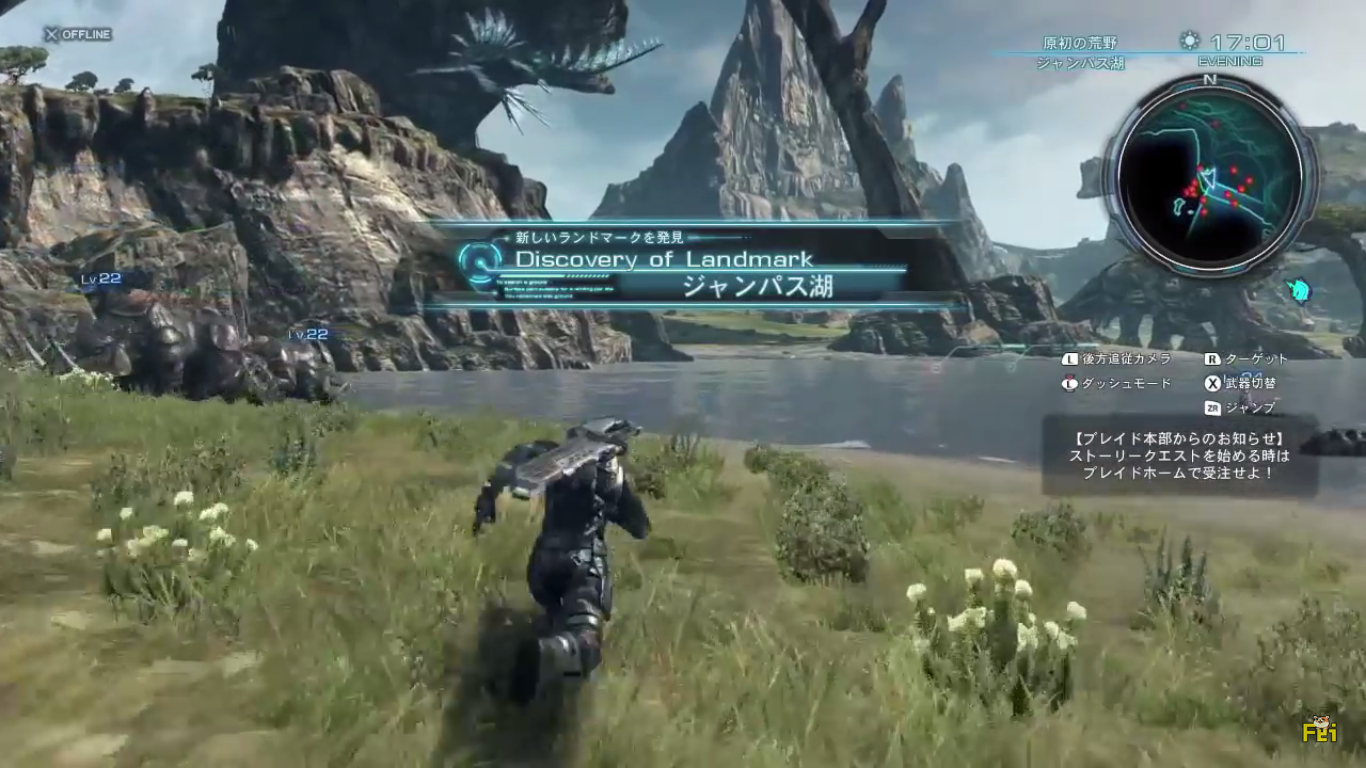 Okay, this one is a bit of wishful thinking. Xenoblade Chronicles and its numbered sequel both had collectible unlocks and pieces of equipment that boosted movement speed in both battle and field exploration, but Xenoblade Chronicles X did it even better with the inclusion of sprinting animations and speed. I love the environments featured on the Bionis and Mechonis, and if fast travel should be even snappier due to the improved power of the Switch, that’s another welcome change.

But nothing was more empowering than taking your squad out onto Mira and using this ability to vault over specific gaps and blasting by enemies that could one-shot you- until they actually did with a ranged attack. With new character models being implemented in the definitive edition, so too comes with new rigging and animation- please Monolith Soft, could you make this happen? It wouldn’t even invalidate the platforming and vaulting challenges featured in-game! 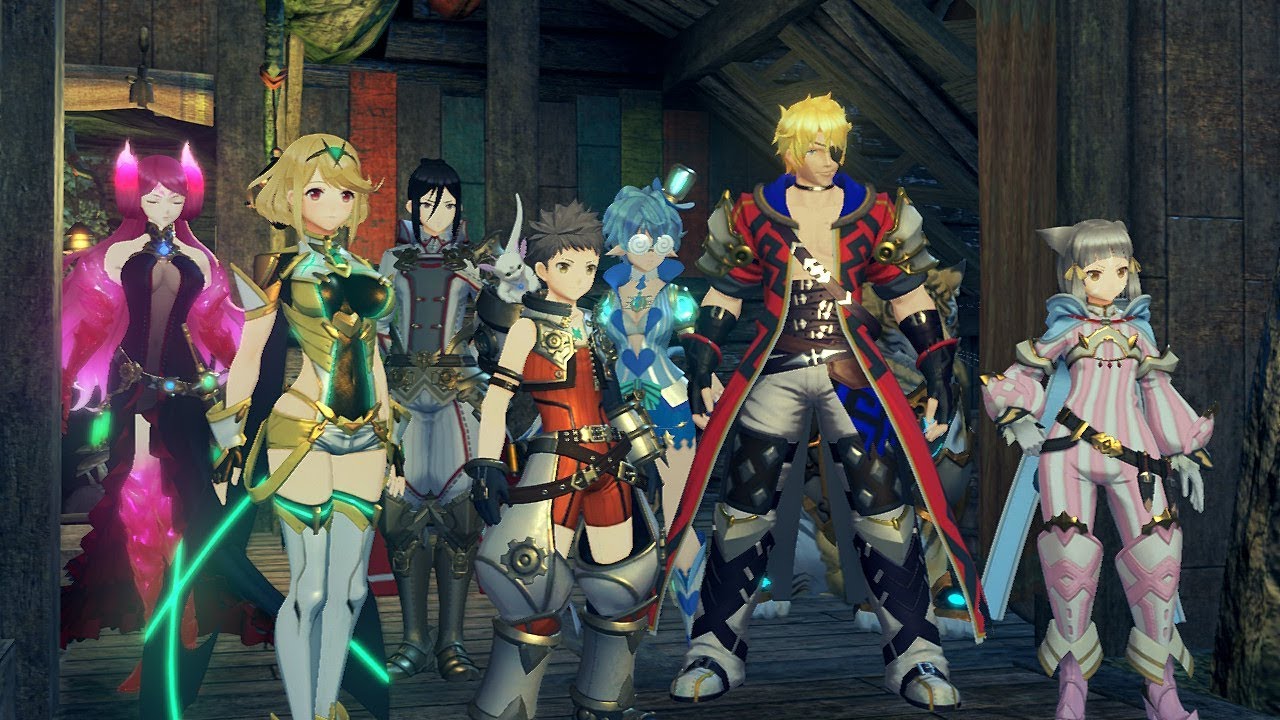 Of course, if this edition is going to attempt to stand toe-to-toe with Xenoblade Chronicles 2, it needs to have a bit of additional challenge. While the original game features enemies with levels in the early one-hundreds and its fair share of named encounters, the remake should definitely offer a challenge mode similar to those found in both Xenoblade Chronicles X and 2.

These modes offer delightful challenges, pitting players against continuous waves of enemies, hyper-aggressive variations on existing superbosses, and some exclusive content that helps unite the universes of the Xenoblade Chronicles series. These range from alternate costumes and equipment that change the look of a character with simple palette swaps or drastic outfit replacements, to even some new additions to your loadout. Hey, if Shulk and Fiora can guest star in Xenoblade Chronicles 2’s challenge mode, why can’t Rex and Nia make an appearance, as well?

Believe it or not, a location for this area already exists in the Bionis’s Shoulder, a region that was partially completed, but never made it into the full product on its original release. As it turns out, the trailer for the Definitive Edition actually confirmed its appearance in this new update, but because its inclusion would add nothing to the already complete narrative, one can only wonder what Monolith Soft has in store for us in this previously unexplored area.

Those are my most-wanted additions to this Definitive Edition, and while some (specifically sprinting) seem like rather tall orders, I think that most of these updates are rather plausible. Given Monolith Soft’s penchant for those aforementioned incremental improvements and the precedent they have set with each title previously, I wouldn’t be surprised if we saw a handful of these wishful thoughts in the game. In the meantime, we’ll continue to cover the latest news on the game, as well as the entire Xenoblade series, as we look forward to its increased presence on the Nintendo Switch.

Are there any features you’d like to see in this Definitive remaster? Are there any influences Monolith should take from other RPG franchises? Feel free to let us know in the comments below!